Paul George Is a Problem 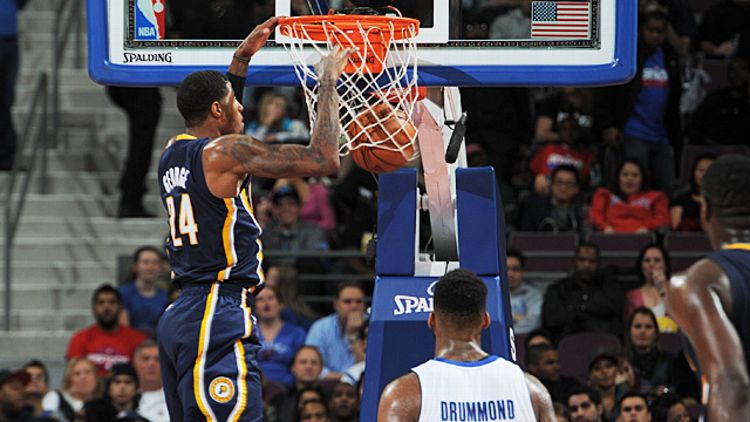 Last season, in late March, I awarded John Wall something called M.V.P.N.N.K.L. It’s the MVP for people not named Kevin or LeBron. The only NBA players disqualified from winning the award are LeBron James and Kevin Durant (and Kevin Garnett, and Kevin Martin … sorry, Kevin Martin). The point is, while Durant and LeBron are around, it’s hard to imagine anyone else winning the MVP award, so we have to come up with something for the rest of the league. Hence, the M.V.P.N.N.K.L.

After one week, this award belongs to Paul George. In fact, he might not even need the Kevin/LeBron exemption. He might just be the MVP.

Last night against the Pistons, George put up 31 points and grabbed 10 boards. He was pretty much unguardable. OK, he was pretty much unguardable by Josh Smith, but still … George is averaging a take-me-to-my-fainting-couch 27 points per game, and has a PER (30.53) that would make John Hollinger throw his Dell through a dry wall. He is shooting the lights out (he has a True Shooting percentage of 66.7 and a field goal percentage of 52.9). And if you want to know about his defense, listen to Bill Simmons and Zach Lowe read romantic poetry about that subject on yesterday’s B.S. Report.

And of course, if you want something sexier, there was this Victor Oladipo Welcome Party block against Orlando …

Small sample size, blah, blah, blah. OK, fine. You want to know what George’s major contribution is to humanity this season? He’s making the Pacers watchable. No, scratch that, he’s making the Pacers appointment viewing. Last season, I will admit, I admired the Pacers from afar. I appreciated their staunch commitment to defense, but that didn’t mean I wanted a two-hour example of it. And besides, I couldn’t really devote myself to watching a game in which D.J. Augustin might participate. Life’s too short.

This season, though, the Pacers go on automatically because you never know when George might turn into a more athletic version of peak Tracy McGrady. This dude could win the dunk contest and the 3-point shootout, and it looks like he’s trying out for both every night.

Against the Pistons, George was fully operational — taking step-backs that went splash, finishing on alley-oops, following up missed shots with dunks, and generally making the Pistons miserable. Oh, and he pulled this out of his bag of tricks:

OK, sure. It’s insane that George is probably not going to make an All-NBA team for the foreseeable future. That’s the Kevin and LeBron problem again, but if he can get the Pacers over the Miami hump, that would be a bigger accomplishment. Don’t wait until then to watch him.