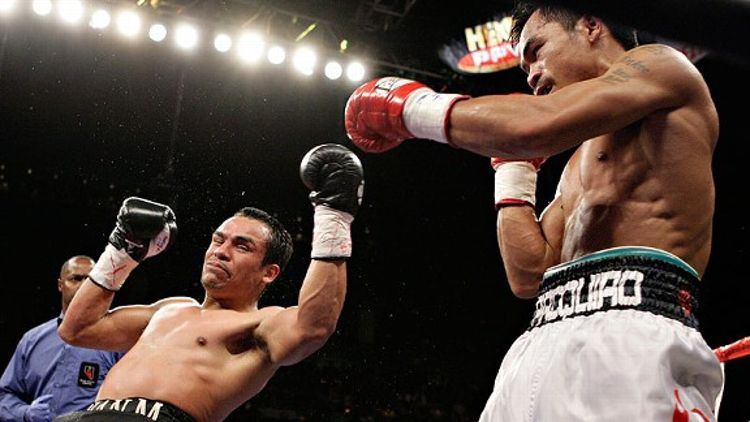 Last Saturday, Alfredo Angulo and James Kirkland gave us a great round of boxing. This Saturday when Manny Pacquiao and Juan Manuel Marquez fight for the third time, we’re hoping that they’ll give fans an even greater spectacle. It’s not that far-fetched. Pacquiao and Marquez’s first two bouts — a 2004 draw and a 2008 split-decision victory for Pacquiao — were among the most memorable in both boxers’ stellar careers. It’s hard to pick one standout round from their first 24, since they were all fought with stunning amounts of speed, precision, ferocity, and resilience, so let’s watch their last three minutes of boxing: Round 12 of Pacquiao/Marquez II, in Las Vegas on March 15, 2008.

Marquez gets the better of Pacquiao in this round, but Pacquiao roars back in the final minute, and the round ends with both fighters bloodied and exchanging power punches.

And here’s the aforementioned Round 1 of Angulo-Kirkland, which Grantland covered exhaustively earlier this week. (Note: Since this fight was so recent, it’s still difficult to find high quality YouTube videos of the first round. Please enjoy this black-and-white version.)

And, since it’s just fun to watch three-minute bursts of intense pugilism, here are some of the other great rounds in modern boxing history: