NHL Weekend: The Devils May Care 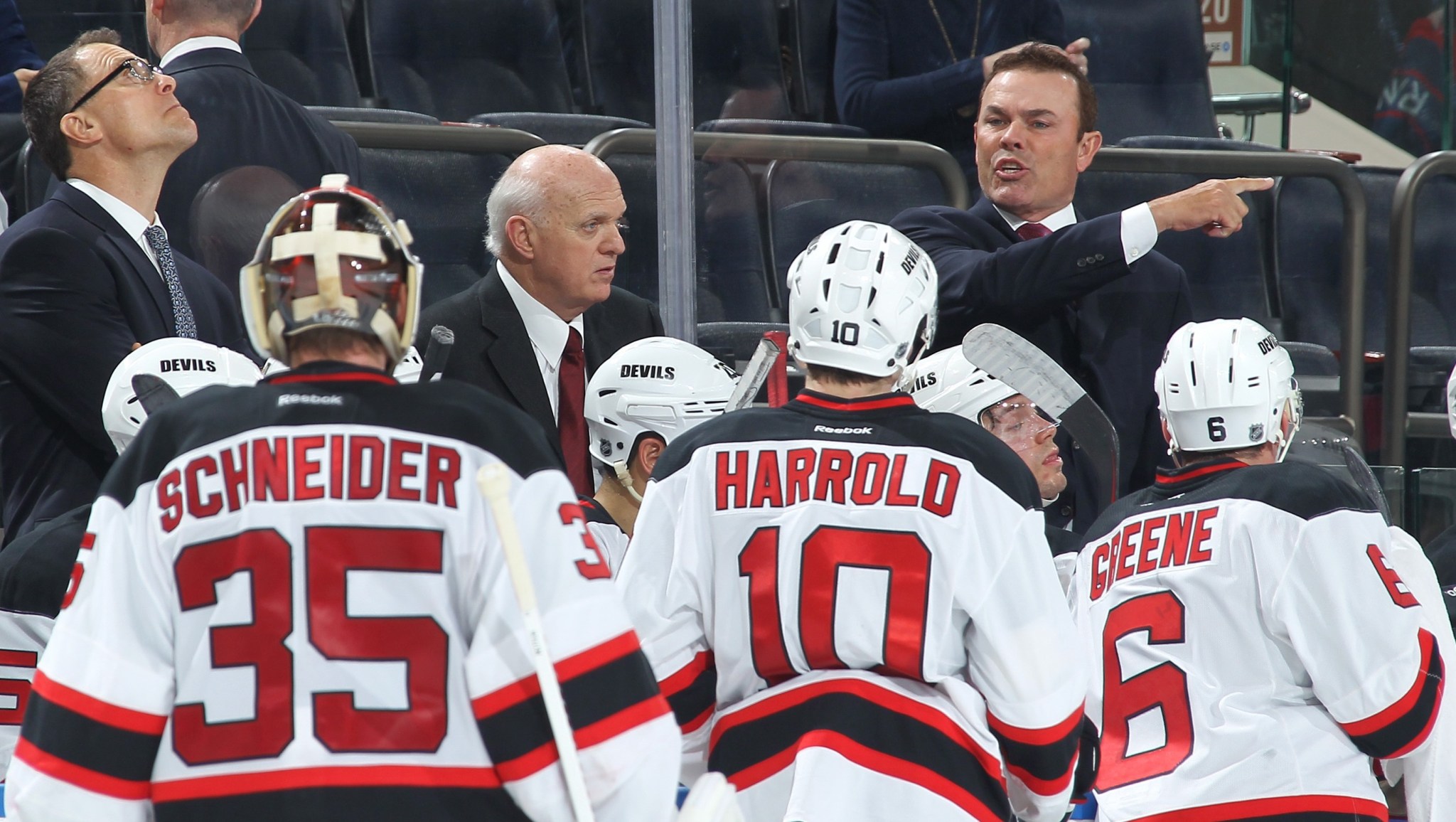 Theme of the Week: Giving the Devils Their Lou

The New Jersey Devils are a mess. That in itself feels like news, since this has been one of the league’s model franchises going back almost a quarter century. Over the last two decades, the Devils have won three Stanley Cups, made five appearances in the final, finished with 100-plus points in 13 seasons while missing the playoffs in just four, and finished with a points percentage under .500 just once (by a single point, in 2011).

So it would be strange enough to say that they’re a standard-issue mess. At 12-18-7, they’re tied with Buffalo for the second-worst record in the East, and have already been all but eliminated from playoff contention before the season’s second half even arrives. But even that doesn’t go far enough, because as of this weekend, the Devils have now become a mess in ways we’ve never quite seen before.

On Friday, the team announced the firing of coach Peter DeBoer, who becomes the third NHL coach this year to lose his job. DeBoer is a good coach who’ll work again somewhere, but he’s certainly not blameless here. While he guided the Devils to the Cup final in 2012, he left plenty of points on the table last year by insisting on starting Martin Brodeur in half the team’s games, and then seemingly overcompensated this season by using Cory Schneider to the point of exhaustion.

DeBoer’s firing led to the usual speculation as to who would replace him, with early reports suggesting Paul MacLean would get the job. Instead, the team announced a highly unusual co-coaching scenario, with Hall of Fame players Adam Oates and Scott Stevens splitting the job. Oates will coach the forwards, Stevens will take the defensemen, and neither will get an official head coach title or, we’re told, be allowed to speak to the media. And overseeing it all, at least temporarily, will be good ol’ Lou Lamoriello, the longtime GM who steps behind the Devils’ bench on an interim basis for the third time.1

The whole thing is bizarre, and it’s led to what would have once been unthinkable: calls for Lamoriello to follow DeBoer into unemployment. Lamoriello has been the Devils’ GM since 1987, almost a full decade longer than any other current GM in the league. He took over a Mickey Mouse organization and turned them into champions, and no front-office face is as tightly linked to his franchise as Lamoriello’s.

And yet some pundits, both locally and beyond, are now asking whether the time has come for Lou to move on, too. This current Devils team bears little resemblance to the one that went to the final just a few years ago, and is largely made up of a mishmash of players and features just a marginal talent level. And they’re old — almost ridiculously old, featuring 16 players over the age of 30 (six of whom are 35-plus).

With the season all but lost, at this point the organization’s best bet is probably to just bottom out and hope for Connor McDavid. If so, maybe this odd three-headed coaching monster is all part of the plan. That may be the only way that it makes much sense — both for the franchise, and for the man who’s calling the shots, at least for now.

4. Nashville Predators (23-9-2, plus-28). They’re two back of Chicago for first in the Central. They also face the Blackhawks tonight.

3. Anaheim Ducks (24-8-6, plus-6). Same old story with these guys. Still not especially great in any key statistical category. Still all alone in first place overall.

2. Pittsburgh Penguins (22-8-5, plus-25). They looked like they were still on holidays on Saturday, dropping an uninspiring 3-0 loss to the Capitals. Upcoming games with the Devils and Hurricanes should give them a chance to get back on track.

1. Chicago Blackhawks (24-10-2, plus-38). The Hawks got back to business after the break, rolling over the Avalanche in a 5-2 road win. They’ve got Nashville tonight, and then it’s on to Washington for the outdoor Winter Classic on Thursday.

There’s not much change from last week to this one, as you’d probably expect given the shortened schedule. But one team does drop out of our top five: the New York Islanders, a first-half feel-good story that suddenly looked awfully vulnerable, at least temporarily, with this week’s announcement that starting goalie Jaroslav Halak had been placed in the IR, retroactive to December 20.

We can probably downgrade the panic level on that particular emergency, as Halak was reactivated yesterday and should be back in the lineup as early as tonight. But the situation did serve as a reminder that the any sort of serious injury to Halak could spell doom for the Islanders’ resurgence. Backup Chad Johnson hasn’t looked good this year, and AHL starter Kevin Poulin has yet to show he’s ready for regular NHL action. Remember, last year’s Islanders season was largely derailed by bad goaltending, which is why the team went out and acquired Halak in the first place. He hasn’t exactly been fantastic — he ranks a middling 17th in save percentage — but he’s been good enough to let the rest of the team’s talent go out and win games.

Once he’s back, they should get back to doing just that. But as we were reminded this week, if Halak ever went down, this team could be in plenty of trouble.

5. Buffalo Sabres (14-19-3, minus-45). A thrilling comeback from down 3-0 in the third to beat the Islanders on Saturday? So help me, Buffalo, you keep this up and I will take you right off this list.

2. Carolina Hurricanes (10-21-4, minus-24). They’ve quietly opened up a seven-point “lead” for last place in the Eastern Conference. At least they’re finally getting Jordan Staal back.

1. Edmonton Oilers (7-22-7, minus-49) After getting a few games to regroup over the holidays, they got back to work on Saturday and were down 3-0 less than 10 minutes into an eventual 4-1 loss to the Flames. They don’t miss a beat, these guys.

Twelve weeks into the season, and our bottom-five lists have actually been fairly consistent. Only 12 teams have been mentioned at all, four of those just one time each. Three teams — the Oilers, Sabres and Hurricanes — have been on the list each and every week,2 so everyone else in the league is basically fighting for two spots.

We’d expect these lists to stabilize as the season goes on, but I started to wonder: Which of the teams that haven’t made the Connor Watch could still be headed toward an eventual spot on the list? There actually don’t seem to be many candidates. An especially disastrous late-season collapse could always come along somewhere — we’re all looking in your direction right now, Toronto — but barring that, most of the usual suspects have already made an appearance. The Avs and Stars have already shown up, and the recently ice-cold Flames briefly held down the no. 5 spot in the season’s debut edition.

Two possible candidates: the Wild and the Senators, both of whom are stumbling along around the mid-30-point mark. The Senators have already fired their coach and have lousy possession numbers; if their goaltending ever stopped being excellent, they could be in huge trouble. The Wild are essentially the opposite. They’ve played great and were even on the Cup Watch list one week early in the year, but lousy play in the crease has torpedoed their season.

• The league eased back into action, with 28 of 30 teams playing a single game over the weekend. The only team to play twice: Anaheim, which split a pair of OT games.

• The only team that didn’t play at all: Montreal, which gets back to work tonight in Carolina. The Habs will be on the road all week due to the World Junior Championships, which are being cohosted in Montreal.

• Also impacted by the WJC — the event’s other cohost, Toronto. The Leafs’ 6-4 loss to the Panthers last night was their third of seven straight games on the road, and 11th of 13 overall.

• That Panthers win moved Florida within two points of the Caps and three of the Leafs for the Eastern wild-card spots. They hold multiple games in hand on both teams.

• Saturday’s Blue Jackets win over the Bruins featured the expected rematch between Milan Lucic and Dalton Prout. It certainly lasted longer than their last matchup.

• The Jets cemented their wild-card status by earning a 4-3 road win over the Wild on Saturday. The Wild will get a chance to return the favor in Winnipeg tonight.

• Don’t look now, but the reigning champs are quietly climbing up the standings. The Kings beat San Jose on Saturday to move into a tie for second place in the Pacific with the Sharks and (after last night’s game) the Canucks.

• Finally, the goal of the weekend, and maybe of the season, belongs to Detroit’s Gustav Nyquist, who controlled the puck for nearly 30 seconds before sniping this overtime winner against the Senators.