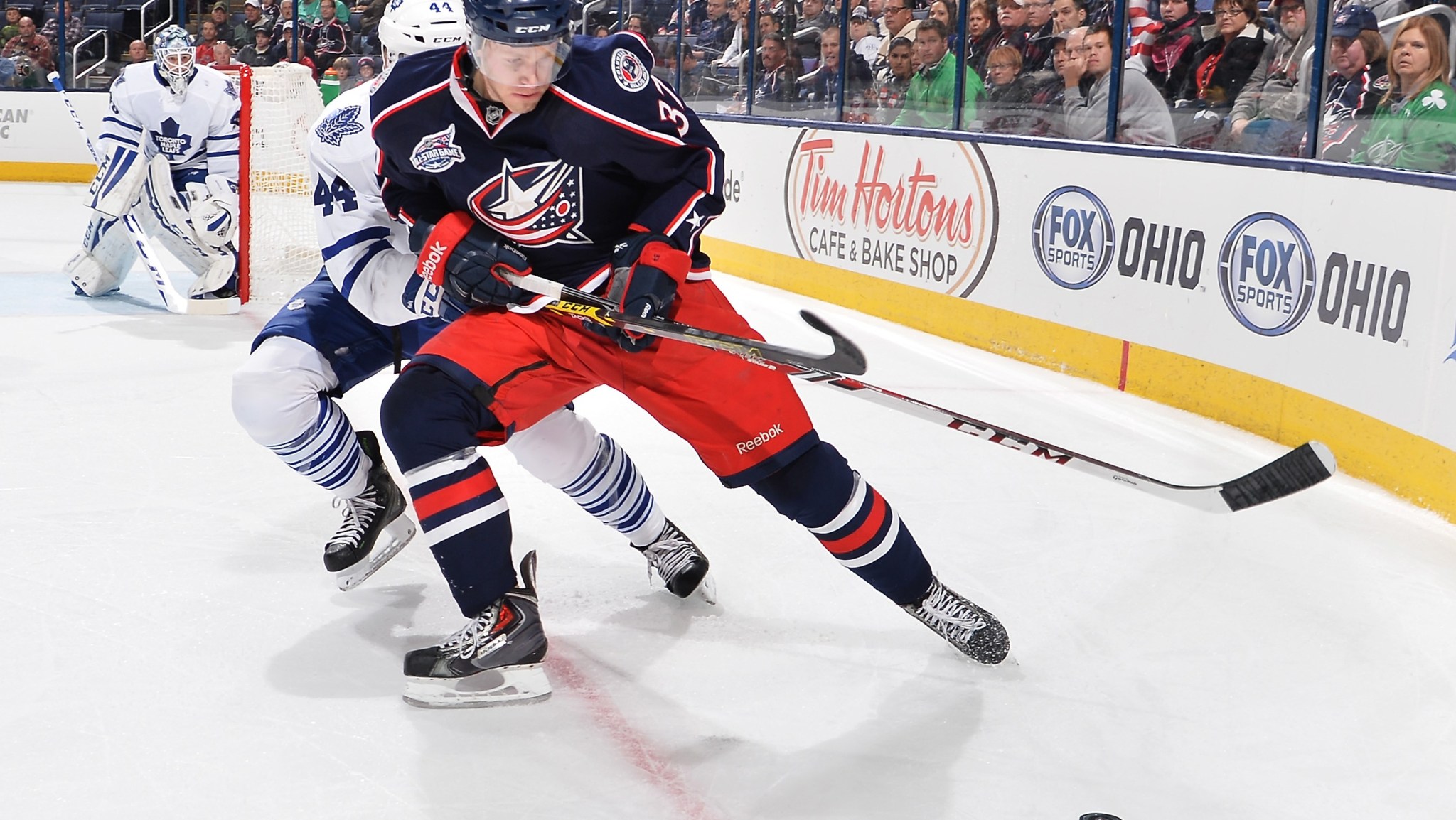 Theme of the Week: The Curse of November 1

Last year, Hockey Night in Canada’s Elliotte Friedman made an intriguing discovery: Since the 2005 lockout, only three teams that had been four points or more out of a playoff spot on November 1 had managed to make the postseason. It sounded crazy — four points is just two wins, after all, and teams have roughly 70 games to make them up — but Friedman showed his work, and the math checked out.

Last season saw a bit of a slowing of that trend; of the eight teams that were at least four points out of the playoffs on November 1, 2013, two — the Stars and Flyers — eventually made it to the postseason. This year, five teams woke up Saturday in the dreaded position of being at least four points back.1 Will any be able to recover?

We can already go ahead and write off the Sabres and Hurricanes, even though both had decent weekends. The Oilers and Coyotes are sporting identical records and sharing last place in the Western standings, and both have the disadvantage of playing in a Pacific Division that, at least for now, seems like the tougher of the West’s two divisions.

The best odds probably belong to the Blue Jackets, who found themselves five points back in the weaker Eastern Conference. That’s not good, but it could be a lot worse given that Columbus has been fighting through a rash of early-season injuries that’s left it icing a borderline AHL lineup some nights. In a Metro Division that’s still sorting itself out, the Blue Jackets could climb back into the mix once they get healthy, as long as they can find a way to stay within range until then.

Montreal Canadiens (8-3-1, minus-4 goals differential): Stellar record aside, lots of smart people continue to insist the Habs just aren’t all that good. It’s not like you even need to dig into obscure stats to show that – they’ve given up more goals than they’ve scored, and won just five of 12 in regulation or overtime. Their performance in a 6-2 home loss to the Flames last night would sure seem to back up the idea that this ends up being their last appearance in our top five.

Minnesota Wild (7-3-0, plus-17): Their gaudy offensive totals are being driven by a clearly unsustainable shooting percentage, so you could be forgiven for doubting them despite their record. On the other hand, their possession numbers look great. Games against the Penguins and Canadiens this week should offer up a good chance for us to figure out whether they’re for real.

Tampa Bay Lightning (8-3-1, plus-10): Everything their record says the Habs might be, the Lightning actually are. And remember, they’re doing it without a Norris-caliber defenseman in the injured Victor Hedman.

Pittsburgh Penguins (7-2-1, plus-19): They’re the only team with a better goal differential than the Wild, which makes tomorrow’s game in Minnesota suddenly look like one of the most intriguing matchups of the week.

Anaheim Ducks (10-3-0, plus-12): The first team to hit the 10-win and 20-point marks has earned this spot, although the goaltending situation is suddenly murky (see below). They start a four-game homestand Wednesday.

This week’s list may be more notable for who’s not on it, as teams like the Blackhawks, Kings, and Bruins continue to just shuffle along, much closer to the fringes of the wild-card race than to their expected spots on top of the league. That’s unlikely to last, but for now it’s opened up a few spots on our list.

You could make a decent case for those spots going to some of the West’s more surprising teams, like the Predators or Canucks. Those two teams faced each other last night, and Nashville came away with an impressive 3-1 road win. Both teams are sitting at 16 points, tied with the surprising Flames and disappointing Sharks. I can’t quite find a place for any of those teams in the top yet, but it’s getting tougher every week.

Colorado Avalanche (3-5-5, minus-7 goal differential): A pair of 3-2 losses over the weekend leaves them in last place in the Central, and now Patrick Roy is calling out Jarome Iginla.

Edmonton Oilers (4-6-1, minus-10): After an awful start, they’ve been looking better lately. But losing Taylor Hall for up to a month will hurt.

Arizona Coyotes (4-6-1, minus-14): They lost to the Hurricanes on Saturday, which is unforgivable, but salvaged some pride with a solid win over the Capitals last night. Is it too early to start worrying about Mike Smith? Because I’m getting awfully worried about Mike Smith.

Carolina Hurricanes (2-6-2, minus-14): The whole “benching healthy star players” section of this script came early this year. But it’s worked, as the Hurricanes somehow went 2-0-0 for the weekend.

Buffalo Sabres (3-9-1, minus-27): The Sabres are .500 in November thanks to last night’s shootout win over the Wings. That’s a nice change, because they weren’t just bad in October; they were historically bad. Meanwhile, their fans are already singing tanking anthems.

And yes, you read that correctly: The Sabres, Hurricanes, and Coyotes all won yesterday. That’s quite possibly the only time that will happen all season, and it throws a wrench in the whole “making fun of terrible teams” thing that we usually do in this space.

So instead of analyzing the teams competing for McDavid, let’s check in on the man boy himself and see how the 17-year-old Erie Otters phenom is doing. The short answer: He’s basically been unstoppable. Through the Otters’ first 14 games, McDavid has 14 goals and 42 points. He has at least a point in every game, and multiple points in 12 of 14. He’s also had three straight four-point games, and seven on the season.

No five-point games yet, though. What a bum.

• We had a rare but always-entertaining emergency goalie sighting in Anaheim last night, as a late injury to Ducks starter John Gibson left Jason LaBarbera as the only healthy goaltender on the roster. That resulted in former NHLer (and current Ducks’ goaltending consultant) Dwayne Roloson suiting up and taking a spot on the bench; sadly, he did not see action in the Ducks’ win.

• Hey, remember this time last week when the NHL was about to go a whole month without a single suspension? Me neither. Six players were suspended this week, including Predators defenseman Anton Volchenkov, who got four games yesterday for this elbow, and Oilers captain Andrew Ference, who got three for delivering a headshot.

• Some strange news out of Minnesota, where Thomas Vanek’s name surfaced as part of a gambling and money laundering case. Vanek himself is not suspected of any wrongdoing, although he’s acknowledged “bad decisions” that he’ll need to move on from.

• The Maple Leafs have won three in a row, including a 3-2 win over the Blackhawks on Saturday that featured this interesting defensive zone look. The team is starting to look OK. The folks in charge of the pregame anthem ceremonies, not so much.

• The Blues have won four straight and quietly moved back into the Central race.

• It was a tough weekend for the Rangers, who dropped a 1-0 shootout decision to the Jets at home on Saturday and also lost defensemen Ryan McDonagh and Kevin Klein to injury. McDonagh is expected to miss up to four weeks.

• Jets goalie Ondrej Pavelec earned the shutout in that one, continuing a strong start to the season that may be silencing some of his doubters. Backup Michael Hutchinson earned another shutout last night, beating the Blackhawks in just his second start of the season.

• The Bruins announced that coach Claude Julien has signed a three-year extension. Presumably, his first order of business will be working with the team’s newest acquisition.

• Finally, best wishes to the family of Gordie Howe, as Mr. Hockey battles back from a serious stroke suffered last weekend. He received a touching tribute from Red Wings fans on Friday.

The Grantland NFL Podcast: Chris Borland, Broncos-Patriots, and the Rest of Week 9