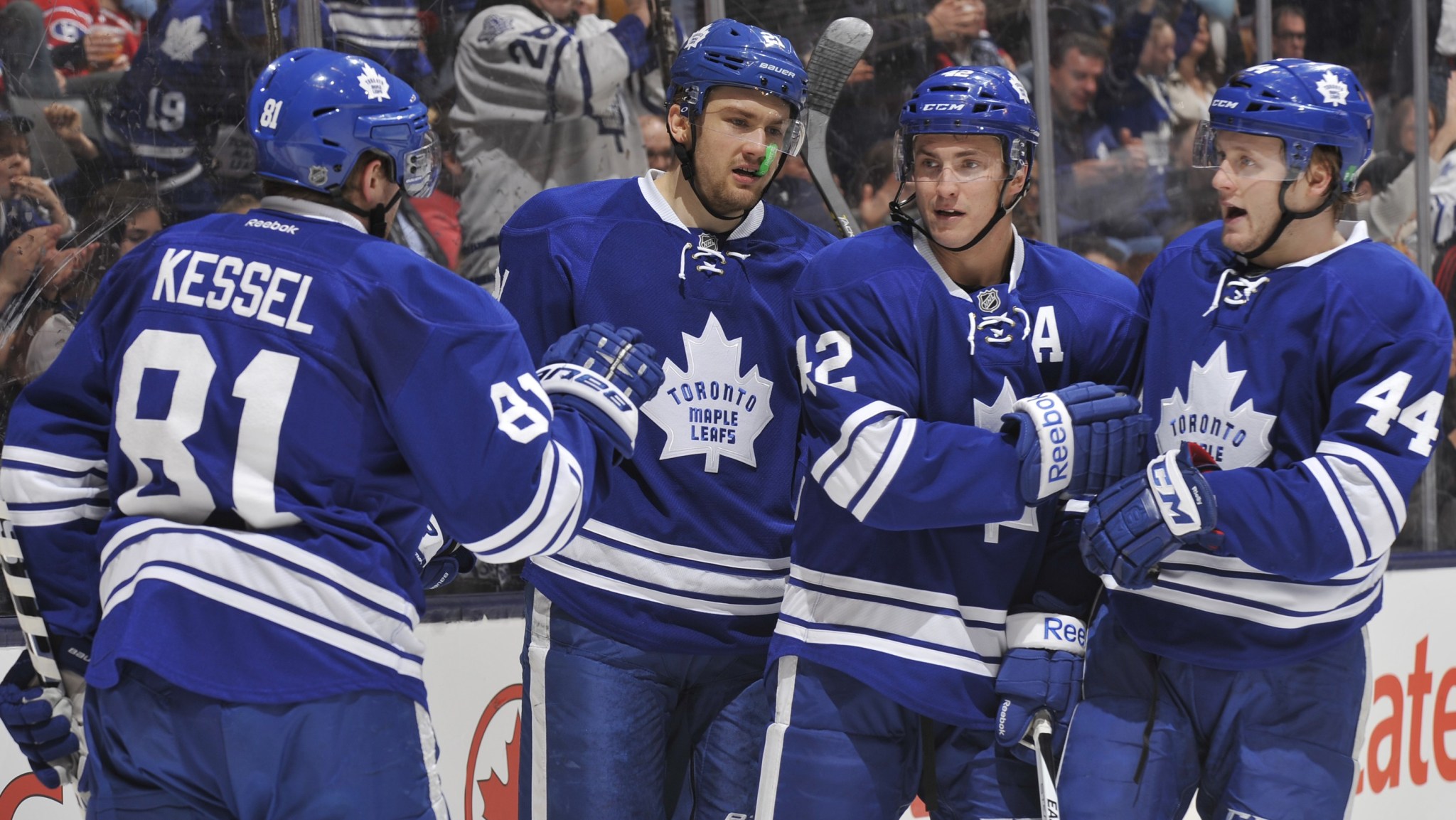 Theme of the Week: Here Come the Playoffs (and the Layoffs)

Saturday marked the end of the regular season, meaning we now know what the playoff bracket looks like. And no, your eyes aren’t deceiving you — both last year’s Presidents’ Trophy winner and Stanley Cup champion aren’t on it. The Bruins and Kings missed the playoffs, meaning a good percentage of this year’s preseason picks are already trashed before the playoffs have even started. We’ve got a preliminary look at the matchups down in the next section, and we’ll have a full preview rolling out over the next two days.

Of course, the start of the playoffs for 16 teams also means the start of the offseason for the other 14. That usually kicks off with a bunch of people losing their jobs, and the Toronto Maple Leafs didn’t waste any time on that front. Yesterday, the Leafs announced that general manager Dave Nonis and interim coach Peter Horachek had both been fired, along with most of the coaching staff and several scouts. Those were obvious moves (although the future of Nonis had somehow become the subject of debate in Toronto), and the Leafs deserve minimal credit for getting the easy ones right. The bigger test comes over the next few weeks and months, but at least Toronto fans get a chance to have been first at something. The Sabres were the second team across the finish line, just like they were in most of their games this year, firing coach Ted Nolan early Sunday evening.

Now we get to see who goes next. Edmonton fans are desperate for a housecleaning and have been for years, although a slight improvement in the season’s second half means they might not get get one. The Sharks will almost certainly fire one or both of Doug Wilson and Todd McLellan after missing the playoffs. Craig Berube could go in Philadelphia, Lindy Ruff might be in trouble in Dallas, and there have been season-long rumors that Dave Tippett could be on the way out of Arizona. And, of course, the Devils will need to figure out what to do with the two-headed coaching creature Lou Lamoriello put in place in December.

And then we circle back to the Bruins and Kings. It doesn’t sound like any major changes will be coming in Los Angeles, despite reports of a major rift between the players and coach Darryl Sutter (which the team basically confirmed). Boston could be a different story; team CEO Charlie Jacobs had previously made it clear missing the playoffs would be considered unacceptable, meaning neither GM Peter Chiarelli nor coach Claude Julien should feel safe.

That should cover us for the next week or so. Once the first round ends, we can play the same game all over again with some combination of Mike Babcock, Ken Hitchcock, Bruce Boudreau, and pretty much everyone who works for the Penguins.

Long story short: If you’re an NHL coach or GM, try not to answer your phone over the next few days. Just to be safe.

5. Montreal Canadiens (50-22-10, +30 goals differential) Studies have shown that momentum heading into the playoffs really doesn’t matter as much as we assume it does. Keep repeating that to yourself, Habs fans.

4. St. Louis Blues (51-24-7, +42) The good: They came on strong to win the division and avoid playing the Blackhawks or the Predators. The bad: They get the Wild instead. The Central is brutal.

3. Tampa Bay Lightning (50-24-8, +53) Are they really the third-best team in the league? Probably not. But this is supposed to be the Cup rankings, and now that we know the playoff matchups, we have to factor them in.

2. Anaheim Ducks (51-24-7, +7) Similarly, Anaheim probably shouldn’t scare anyone, and it could absolutely lose to Winnipeg in the first round. But the Pacific is far easier than any other division, and the eventual Central winner should be decimated by the conference finals, so the Ducks have to like their chances.

1. New York Rangers (53-22-7, +61) They finished with the best record and get a first-round matchup with a team that barely crawled across the finish line. In a year as crazy as this one, that’s about as good as it gets for any team.

We have a two-part playoff preview coming Tuesday and Wednesday, but let’s just go ahead and put this on the record right now: I’ve got no idea who’s winning anything. None. This is the hardest playoff bracket to pick that I can ever remember. Just about every first-round matchup is tough to call, none of the divisions have a clear-cut favorite, and 13 of the 16 teams have a realistic chance of winning the Cup.1 So I’m lost. If I go 8-for-8 on my first-round picks, please understand it’s the result of pure luck and nothing else. (I will delete that line if it happens.)

To start with, the Central bracket is a mess. That Blues/Wild matchup is probably the very best of the first round, arguably featuring two of the league’s five best teams. Hawks/Predators won’t be any easier, although literally everyone will pick Chicago just so we can claim we took an upset somewhere. And then you’ve got the Jets, who’ll cross over to the Pacific to face the vulnerable Ducks. Is Winnipeg now the favorite to win a division it’s not even in? It honestly might be.

In the East, the Rangers look to have a relatively clear path to the conference final, as they draw a slumping Penguins team. But even if they slip past Pittsburgh — and are we really that sure the Crosby/Malkin combo doesn’t wake up and decide to dominate? — they’ll run into either the Caps or Isles, both of whom are already sitting on some serious dark horse potential. The Habs finished first in the Atlantic, and as a reward they get to try to stop the unbeatable Senators and their hamburger-powered miracle run. And the Lightning/Red Wings matchup, on paper, is the only easy call in the entire first round, which probably means Detroit will win in four.

It’s madness. The next two weeks are going to be fun, and when they’re over we’ll all pretend we had any of it figured out. None of us do, of course, but we’ll pretend. Now go find your trusty flipping coin and get to work on filling out that bracket.

If you’re a fan of symmetry, you had to appreciate a glance at the hockey world’s headlines on Friday night. Connor McDavid had scored five goals in an OHL playoff game. Jack Eichel had won the Hobey Baker as the best player in college hockey, becoming just the second freshman to win the award. And while all of that was going on, you had the Sabres, who lost to the Blue Jackets to finally wrap up their season-long quest to finish last.

That last-place finish means the Sabres will end up with McDavid or Eichel. The lottery will give them a 20 percent shot at the first overall pick and guarantees them no worse than the second. Everyone else, including other awful teams like the Coyotes, Oilers, and Maple Leafs, will have to wait and see how the Ping-Pong balls bounce.

(The draft lottery will be held Saturday. In a bizarre twist, the league has decided not to make a major production out of the event, instead simply slipping the results into a playoff pregame show. In a year when the lottery was a season-long focus for much of the league’s fans, apparently only now has the league decided it shouldn’t be such a big deal.)

The consolation prizes for the teams outside the top two aren’t bad. There’s Noah Hanifin, the slick blueliner who seems to have emerged as the consensus third pick. Two high-scoring centers, Dylan Strome and Mitch Marner, will be picked high, although there’s considerable debate as to who should be selected first. And winger Lawson Crouse’s combination of skill and size will probably prove irresistible to someone.

Any of those guys would be reasonable candidates for first overall in any other year. But this year has been all about McDavid and Eichel since opening night, and nothing has happened since then to change that. Two teams will walk away from the draft with a sure thing to build their future around. One of those teams is the Sabres; we’ll have to wait to find out who the other is.

And since this is the season’s final weekend wrap, let’s end this section with a quick statistical roundup of a year’s worth of power rankings:

Number of teams that appeared in the top five: 15

Number of teams that appeared in the bottom five: 13

Number of teams that appeared in the top five every week: None

Number of teams that appeared in the bottom five every week: Two (Buffalo and Edmonton)

Number of teams that appeared in both the top and bottom five: None

Number of teams that appeared in the top five but ended up missing the playoffs: Three (Bruins, Kings, and Sharks, who all made the list in Week 1)

Number of teams that appeared in the bottom five but ended up making the playoffs: Two (Flames and Jets)

Number of teams that never appeared in either the top or bottom five: Two (Capitals and Senators)

Number of rankings I now look back on in hindsight and wonder what the hell I was thinking: Every single one

(Except this week’s. This week’s are rock solid.)

• Jaromir Jagr is coming back. The 43-year-old signed a one-year extension with the Panthers yesterday.

• Congratulations to the Providence Friars, who beat Boston University in the Frozen Four final on Saturday. The game swung on an almost unbelievable fluke goal — the Terriers held a lead with nine minutes left when this happened.

• A reminder: With the regular season over, it’s now time to start speculating about which star players from the eliminated teams will fake an injury to get out of the world championships.

• The Islanders played their final regular-season game at Nassau Coliseum on Saturday, a 5-4 loss to the Blue Jackets. We don’t know when the last playoff game will be, but let’s face it, it’s going to involve the Rangers.

• And finally, your weekly dose of NHL standings stupidity: The Canadiens and Blackhawks ended up splitting the Jennings Trophy, which is supposed to go to the goaltenders on the team that allows the fewest goals, even though Montreal gave up two fewer goals than Chicago. Why? Because (as we’ve mentioned before) the NHL counts shootout wins and losses as goals for the purpose of the award.

The lesson, as always: The shootout is terrible. And we’ve seen the last of it for another year. Bring on the playoffs.

The 30: Are the Royals This Year’s Royals?