NHL Weekend: How the West Was Lost 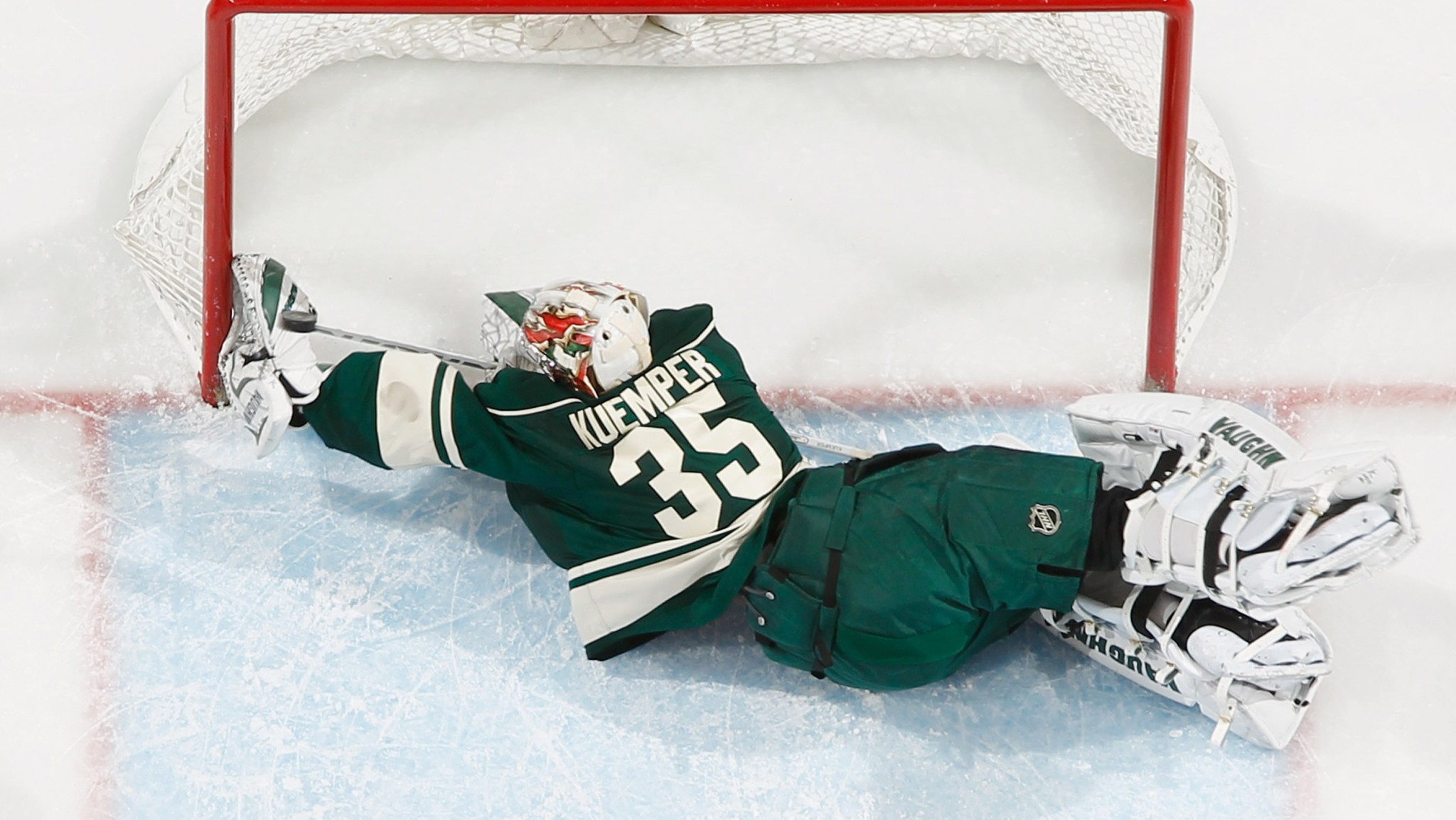 Theme of the Week: Western Blowouts Could Signal Change

Three teams have fired their coaches this season: Ottawa, Edmonton, and last week’s bizarre mess in New Jersey. With a pair of struggling Western teams suffering embarrassing blowout losses over the weekend, that number could be on the verge of rising.

In San Jose, Todd McLellan didn’t sound like a guy with any answers after Saturday’s 7-2 loss to the Blues. The Sharks coach is probably used to this by now, since he’s been on the hot seat for years, and everyone assumes he’ll be fired if the team can’t make a deep playoff run. But right now that may not be an issue, because the team is struggling just to earn a playoff berth, sitting tied with the Flames for the last wild-card spot. All signs point to the Flames falling out of contention, but the suddenly surging Stars are just three points back and probably pose the bigger threat.

And then there’s the team right behind the Stars, the Minnesota Wild. They took a 7-1 beating from Dallas on Saturday in a game in which Wild goalie Darcy Kuemper was pulled yet again. That’s a tough loss for a team that seemed to be rounding back into shape following a five-game December losing streak, and it left the Wild five back of a playoff spot with three teams to pass. That’s just not good enough for an organization that’s spent heavily in hopes of building a Stanley Cup contender, and at some point somebody will likely have to take the fall.

That could end up being coach Mike Yeo, even though it’s hard to put too much blame on him. The Wild are one of the league’s better possession teams, but they’ve been let down by their goaltending. Niklas Backstrom has struggled, and Kuemper’s play has plummeted after a hot start. That’s hardly Yeo’s fault, although coaches’ reputations tend to live and die with the goaltenders. It’s also worth remembering that Yeo was very much on the hot seat this time last year before eventually guiding the team to a playoff spot and a first-round upset of the top-seeded Avalanche. But the Wild are one more bad stretch away from being eliminated from playoff contention, so fair or not, Yeo will be under a microscope for the rest of the year.

If there’s one piece of good news for the Sharks and Wild, it’s that at least one of them will be getting back into the win column soon. The two teams face each other tomorrow night in Minnesota.

5. St. Louis Blues (23-13-3, plus-19 goals differential): After spanking San Jose, they look well-positioned to bank some points this week. Their next four games are against the Coyotes, Sharks again, Hurricanes, and Oilers.

4. Pittsburgh Penguins (24-10-5, plus-24): At this point, I still like them just a bit better than the Islanders, even though New York has temporarily snuck back into a tie for first place in the Metro.

3. Nashville Predators (25-9-4, plus-28): Their 7-6 win over the Kings was the weekend’s most entertaining game, even though coach Peter Laviolette probably didn’t enjoy seeing his team blow a 6-3 lead with two minutes left. Last night’s 4-3 shootout loss to the Ducks wasn’t far behind.

2. Anaheim Ducks (26-9-6, plus-5): At this point, the book on the Ducks is well-known. They’ve average in just about every category but are nearly unbeatable in one-goal games. An unsustainable run of good luck, or a team that just knows how to win? I know which way I’m leaning, but for now they remain all alone in first place overall.

1. Chicago Blackhawks (26-11-2, plus-39): At some point, we may have to start disqualifying the Central Division to give the rest of the league a chance. For the second week in a row, the Blackhawks, Predators, and Blues take up the majority of our list.

The top half of the division is flat-out terrific, and that means there’s probably no more important place in the standings than first place in the Central. Remember, the team from our Big Three that earns that spot will get a wild-card team in the opening round, while the other two teams are left to face each other. The West’s wild-card teams won’t exactly be first-round byes, and a tough first-round matchup doesn’t mean a team can’t win the Cup (as the Kings showed us last year), but it’s pretty clear that finishing first will be a big advantage. Right now, it’s the Predators who are holding down that spot via tiebreaker, and while it’s probably too early to be thinking this far ahead, a Hawks/Blues first-round rematch would be all sorts of fun.

And yes, I see you gathering outside my house with torches right now, Montreal fans. The Canadiens have won six straight, their 54 points are as many as any team on our list aside from Anaheim, and they just finished beating the Penguins. They’ve got a strong case to be on this list, even though some signs — their mediocre underlying numbers and their lucky 5-1 shootout record come to mind — point to them not being quite as good as their record indicates. They’ve got a light week ahead, but it features a pair of tough opponents in the Lightning and Penguins. If they can win both, I probably can’t keep them off next week’s list.1

5. New Jersey Devils (14-20-7, minus-27): Jaromir Jagr became the oldest player in history to record a hat trick in Saturday’s win over the Flyers. Hey, are we allowed to talk about him being trade deadline bait yet?

4. Arizona Coyotes (15-19-4, minus-32): Their sale is official, as Andrew Barroway was introduced as the team’s new owner on Friday. This being the Coyotes, there are already rumors that Barroway is looking to sell, which he denies. After years of uncertainty, here’s hoping we finally get some stability in Arizona.

3. Carolina Hurricanes (12-23-4, minus-25): They beat the Bruins yesterday and it didn’t really feel like much of an upset. That probably says more about the Bruins then it does about the Hurricanes.

2. Buffalo Sabres (14-23-3, minus-59): With four consecutive losses and historically poor possession numbers, the Sabres are back on track to regain the no. 1 spot. They’ll get a chance to cement that status when they face the Devils and Hurricanes this week.

The league saw what may stand as the season’s biggest trade on Friday. Granted, that’s a low bar, but the deal that sent David Perron from the Oilers to the Penguins in exchange for Rob Klinkhammer and a first-round pick could be important. The move not only helps shore up Pittsburgh’s top six, but it could signal an early start to this year’s trading season.

Most seasons, teams prefer to hold off on making major deals until the trade deadline nears. There are various reasons for that — it’s easier to fit deals under the salary cap later in the season, and even terrible teams like to convince themselves they’re still in the race as long as possible. So we typically don’t see the trade market heat up until mid-February at the earliest.2

But this year could be different. With a pair of future franchise players in Connor McDavid and Jack Eichel waiting at the draft, a last-place finish has rarely been so valuable. That could give teams that have already fallen out of the running some extra incentive to start selling quickly, since a few extra losses in January could make a big difference at draft lottery time. That’s the theory, at least, and it’s one we’ve tried pushing before. And now that the Oilers have officially started down the road to Yet Another Rebuild, we could see it in action.

As for the deal itself, it’s a reasonable one for both sides. Perron isn’t anyone’s idea of a superstar, but he’s a hard worker who can score 20 goals, and he’s signed through next season on a reasonable deal. Edmonton gets decent value in the form of a first-round pick in a deep draft, even though it’s likely to be a very late selection. Of course, the Oilers haven’t had much luck drafting outside the top 10, and it’s possible they could try to move the pick for more immediate help in the offseason.

But in the meantime, the Oilers get a future asset and they get worse for the rest of the season, which is pretty much exactly what the league’s bottom-feeders should be trying to do. Let’s see how long it takes teams like the Sabres and Hurricanes to respond.

• There was some tough news for hockey fans when CapGeek.com announced it’s permanently ceased operations to allow founder Matthew Wuest to focus on health issues. The site had become an indispensable resource over the years for fans, media, and even front-office types. Here’s hoping for the best for Wuest.

• It was an eventful few days for Pittsburgh. In addition to the Perron trade and being caught by the Islanders, their weekend featured a practice fight between Evgeni Malkin and Craig Adams and a game interrupted by a vomiting referee.

• Flyers star Claude Giroux suffered a scary-looking injury Friday when a skate sliced the back of his leg. The injury looked similar to the one that kept Ottawa’s Erik Karlsson out for three months a few years ago, but the Flyers say Giroux’s isn’t serious. He did miss Saturday’s game in New Jersey.

• Another injury to a star player: Panthers goalie Roberto Luongo was run over by Alexander Ovechkin during yesterday’s loss in Washington. Early reports are that he’ll be OK, which would be good news for a Panthers team that’s making a legitimate playoff push.

• The Bruins continue to struggle and have now dropped three straight, but I think Tuukka Rask might be on to something …

• If you enjoy watching teenage boys frantically slam into panes of glass and/or cry uncontrollably, tonight’s your night: It’s Canada vs. Russia in the gold-medal game of the World Junior Championships.

• Finally, congratulations to Zemgus Girgensons and the entire Blackhawks roster on being named starters for this month’s All-Star Game. Yes, the game is still three weeks away, but remember: Players need lots of time to start planning their fake injuries to get out of going.

Wild-Card Wrap-up: A Flag on the Play