NHL Opening Weekend: The Blues Shine, the Red Wings (Might) Stink, and Teemu Is So Happy 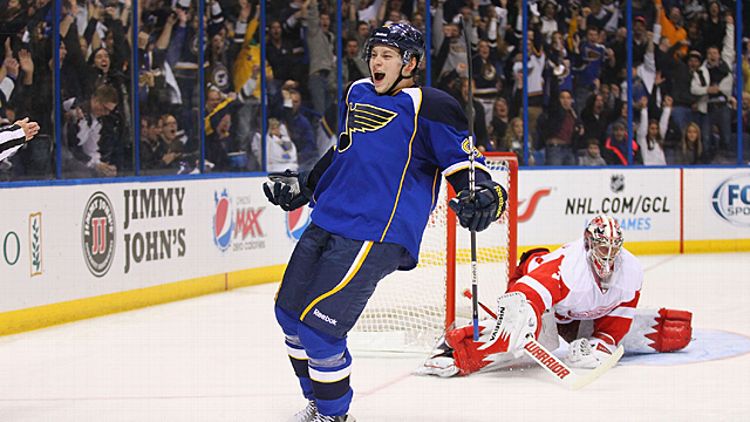 It’s probably foolish to try to read anything into two days’ worth of games, especially when half the players in the NHL are still trying to get back to pre-lockout form. But that’s no reason not to try, so here are 10 random observations from the NHL’s opening weekend:

The Blues made a statement

The St. Louis Blues entered the season as a trendy pick to win the Western Conference. They looked the part Saturday, pummeling the Detroit Red Wings, 6-0, and outshooting them, 17-2, in a first-period display that played out as a near-perfect depiction of Ken Hitchcock hockey.

The game also featured the breakout performance of opening weekend, with Blues rookie Vladimir Tarasenko scoring a pair of goals, including a filthy individual effort in his NHL debut. The 21-year-old 2010 first-round pick has spent the last few seasons in the KHL, and could make a major impact if he can bring consistent production to a Blues offense that wasn’t exactly intimidating last year.

But while Tarasenko could be the league’s next big star, let’s hold off on the hype until we see him do it against an NHL-caliber defense.

Which is my polite way of saying …

It’s never a good idea to count a team out after one game, and that’s especially true when that team has been the league’s most consistent contender for two straight decades. So we can probably forgive the Red Wings an occasional stinker.

And that’s good news, because, man, did they ever stink. The biggest question mark hanging over the team coming into the season was how the defense would respond to the loss of Nicklas Lidstrom, and now we know: by curling up in a little ball and sobbing quietly to themselves.

The Red Wings get to play the Blue Jackets tonight. If they get spanked again, it’s time to worry.

Josh Harding was the feel-good story of the weekend

In his first start since being diagnosed with multiple sclerosis, Wild goaltender Josh Harding posted the shutout in a 1-0 win over the Stars. Harding had battled through adversity even before his diagnosis, including missing the entire 2010-11 season after tearing his MCL and ACL in a preseason game, and has never been able to establish himself as a starter. He’s not likely to do that this year, with Niklas Backstrom having a firm hold on the job in Minnesota, but efforts like Sunday night’s will help.

The win moved the rebuilt Wild to 2-0 heading into a five-game stretch where they’ll face the entire Central Division.

It was a good weekend to be an old man

So much for the idea that an abbreviated preseason would favor young legs. After the first night of action, it was a pair of 40-somethings who found themselves on top of the NHL’s scoring race. Both Teemu Selanne and Jaromir Jagr recorded four-point games to lead their teams to impressive wins.

Here’s a question: Why do we all love Teemu Selanne and not Jaromir Jagr? Honestly, my 2-year-old son can say, like, seven words, and five of them are “Teemu Selanne is so happy!” That makes sense, since Selanne has had a legendary career. But Jagr has been even better, and he doesn’t get the same sort of love from fans.

Wait, did I have a point? I feel like I had a point.

Jaromir Jagr’s 1991 mullet was fantastic. I think that was my point.

And speaking of old guys …

Did you know that 39-year-old Alexei Kovalev is back in the league after a year overseas? It was an easy comeback to miss, given that he signed with the Florida Panthers, a team that nobody pays attention to. But based on opening night, we might need to start — the Panthers went up against the heavily hyped Carolina Hurricanes and waxed them, 5-1, behind three points from Kovalev.

The Panthers got so little credit for last year’s Southeast Division title that many fans probably don’t even remember that they won it. And you couldn’t find many preseason predictions that had them repeating. After watching Florida shell Cam Ward & Co., that might change.

In my “10 players to watch” preview last week, I wrote this: “even two bad games in a row will trigger DEFCON Goalie Panic 1 in Philadelphia.” Two games later, Ilya Bryzgalov and the Flyers are 0-2.

So is it Goalie Panic time? Not necessarily. Bryzgalov was fine in a season-opening 3-1 loss to the Penguins, and he didn’t get much help from his teammates in a 5-2 loss to the Sabres on Sunday. If anything, the Flyers may want to activate Blueline Panic mode instead. Their rebuilt top six has looked shaky, to put it kindly.

If it’s any consolation, at least the Flyers have some company among Cup-favorite teams starting off with a pair of losses, because …

The Rangers are also 0-2

It’s hard to get too worked up over losses to the Bruins and Penguins, two of the best teams in the league. But the Rangers’ weekend included some troubling signs — their big-budget offense didn’t do much when it counted, they repeatedly spent long shifts hemmed in their own zone, and Henrik Lundqvist was pulled for the first time since the 2010-11 season.

But don’t worry, I’m sure John Tortorella will react to all this in his usual happy-go-lucky style.

Roberto Luongo was expected to be traded out of Vancouver by the start of the season. When that didn’t happen, he was expected to ride out the year as an expensive backup to new starter Cory Schneider.

That lasted for all of 26 minutes of Vancouver’s home opener, which is when Schneider was yanked after giving up five goals to the Ducks. The next day, the Canucks announced Luongo would start Sunday night’s game against the Oilers.

That sounds like the first chapter of a juicy goaltending controversy. But sadly, it appears that Luongo’s start had been penciled in all along. Schneider’s still the starter, Luongo’s still his $6.7 million backup, and the Canucks are still the prohibitive favorite in the Northwest. Of course, a few more five-goal Schneider meltdowns could change all three of those things in a hurry.

The Canadiens might not win much anymore, but they’re the still the masters of the pretentious pregame ceremony. Sure, Saturday night’s production — in which various Canadiens legends made their way through the crowd to pass a torch to members of the current roster — was overly long and drenched in self-importance. After all, that’s kind of the point. And it was still the undisputed highlight of the night for Habs fans, who went to watch their squad lose 2-1 to the Maple Leafs in a dull game between two downright bad teams.

Still, the ceremony was fun. And based on the state of things in Calgary, it was probably the only positive moment that a Flame will have on Hockey Night in Canada all year.

Finally, we might as well start getting ready for the 2020 lockout right now

The buildings were full, the fans were loud, and the TV ratings were fantastic — so much for that post-lockout hangover. Gary Bettman and the owners gambled that they could walk all over the fans without paying a price, and it looks like they were right. That means hockey fans can expect to go through this whole lockout mess again in eight years.

But look on the bright side — at least when the lockout of 2020 finally ends, we can still look forward to big years from Jaromir Jagr and Teemu Selanne.