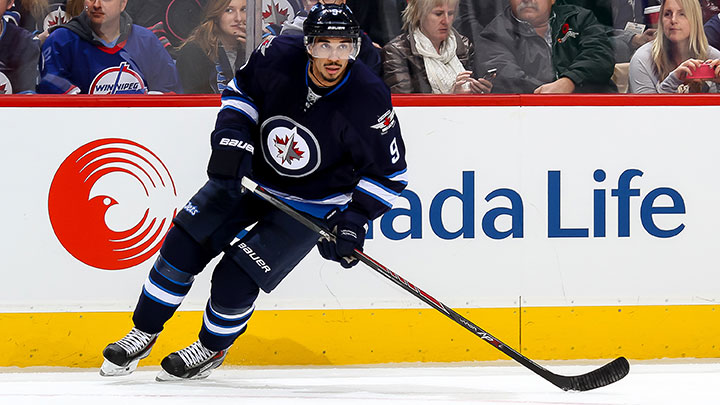 The third star: A young Dale Tallon being terrified of Gordie Howe

Tallon, now the Florida Panthers GM, made the All-Star team as a rookie with the Canucks in 1971. As he recalled in the Vancouver Sun this week, he even got a locker next to Howe, which you might think would be awesome. It was not awesome.

A teenaged Dale Tallon made sure Gordie Howe didn't see him gear down at all-star game http://t.co/FFbYXLZomJ pic.twitter.com/bmvzxiSWEw

Well, not the whole country. Just … [checks math] … 90 percent of the whole country. That seems to be roughly how many Latvians are stuffing the ballot box for countryman Zemgus Girgensons, who leads All-Star voting by a mile despite not being all that good. Does it make the voting process a farce? Sure, but the All-Star Game is already a farce, so let’s be thankful someone at least found a new angle. Besides, any country that gave us the legendary Arturs Irbe should feel free to have a little fun. Keep on stuffing, Latvia.

The Oilers lost again Wednesday. For some reason, this surprised GM Craig MacTavish, who you figure would be used to it by now.

A screen cap of the stunned GM later inspired one of those annoying Twitter memes where everyone makes “jokes” that just involve naming any movie and TV show they’ve ever watched, but forget about that and concentrate on the GIF. Does he even blink? Is this what it looks like when a man’s internal organs shut down one by one? Can we assume he was making a heartbreaking leaky balloon noise the whole time? I think we can.

(But seriously, somebody needs to check and see if MacTavish is still there.)

The issue: Evander Kane posted a photo of himself doing pushups with a stack of bills on his back. 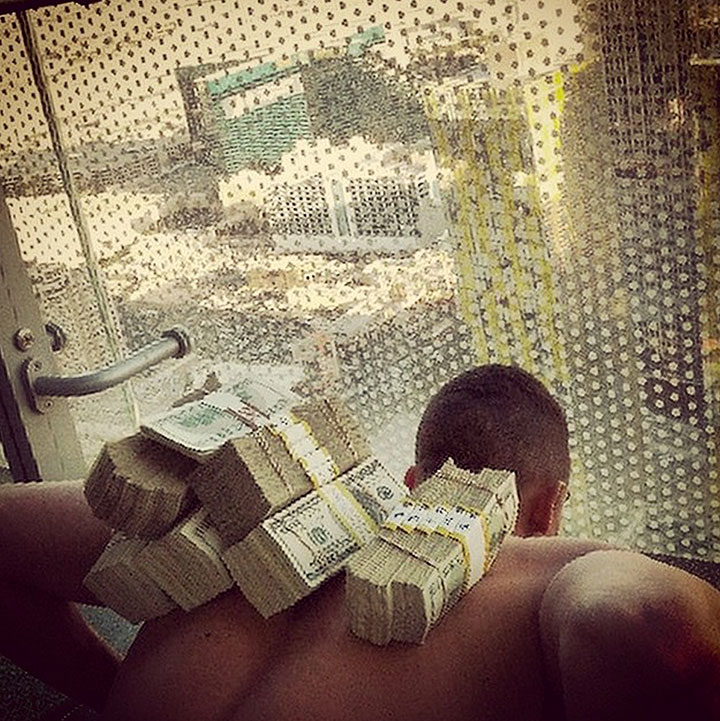 Is it justified: First, the obvious punch line: Members of the hockey media are angry that Kane is flaunting something that none of us have or ever will have, which is to say, the ability to do a pushup.

With that out of the way, Kane obviously has a history here. He got in trouble during the last lockout by posting this photo, and everyone freaked out then, so Kane knew what was coming here. This is kind of like the whole Maple Leafs salute thing from two weeks ago; it’s dumb, but in an entirely avoidable and predictable way that strips out most of the case for sympathy.

The reaction was out of proportion in some quarters, because it always is. People acted outraged on Twitter. One writer linked Kane’s photo to the death of Jean Beliveau. There have been calls for Kane to repent by donating baby formula, which I can’t say I fully understand but a good cause is a good cause.

The outrage over the pushup seemed relatively muted compared to the money phone, so maybe we’re trending in the right direction. And for what it’s worth, Kane says the whole thing was all in good fun. He’s one of the few players willing to show a little personality, so he’ll almost certainly do something like this again.

But if you do, Evander, at least step your game up. You’re not the only NHLer who’s interested in the look-at-all-this-money genre, and the bar has been set high.

Martin Brodeur debuted with the St. Louis Blues last night, days after signing as their backup goaltender. So this week, I thought we’d honor an obscure player who once held the same job description: former Blues backup Pat Jablonski.

Jablonski was drafted by the Blues in 1985 and made the NHL in 1989. He didn’t play much, and three years later was traded to the expansion Lightning, where he briefly featured as the part-time starter. From there it was on to Toronto, back to St. Louis, and then to Montreal, Phoenix, Carolina, and eventually Europe, before he retired in 2001.

While Jablonski never played much, he did manage to assemble a collection of odd claims to fame. He was the goalie of record in the first tie in Lightning franchise history. He was in net for part of Peter Bondra’s five-goal game in 1994. And probably most famously of all, he was the guy who (eventually) relieved Patrick Roy on December 5, 1995, following nine goals that would spell the end of Roy’s career in Montreal.

Several years ago, Jablonski broke his neck and almost died in a boogie boarding accident that he recounts in this video. He’s since made a full recovery.

This week’s depressing CapGeek page belongs to Vincent Lecavalier, the veteran Philadelphia Flyers center who was a healthy scratch this week for the first time in his NHL career. He’s not happy about it, but the move seemed inevitable since he’d already been relegated to fourth-line duty and hasn’t been producing offensively. At 34 years old, he sure seems like he could be done.

That’s a problem for the Flyers, because as Lecavalier’s CapGeek page reminds us, he’s signed through the end of 2018. He’ll annually cost $4.5 million against the cap until then, thanks to the ridiculous deal the Flyers gave him last summer.

Or at least, he’ll cost them that much unless he retires (unlikely), they can find a trade partner (wishful thinking), or they buy him out (getting warmer). That last option would be a familiar one, since Lecavalier already holds the record for the richest buyout in league history: a compliance buyout that netted him more than $32 million from the Lightning in 2013. It would cost the Flyers an additional $8 million to cut ties with him next summer.

By the way, Lecavalier has already been our most depressing CapGeek page when he was still with the Lightning, making him the first player to “earn” the honor twice.

Last night was an emotional scene in Ottawa, as retiring former captain Daniel Alfredsson returned to the franchise for one last spin around the ice. While his playing career in Ottawa ended badly, the two sides have made amends and Alfredsson will always be a Senator at heart, so this week we’re going to break down a clip of what stands as indisputably his greatest moment in an Ottawa uniform. It’s his overtime goal in 2007 to eliminate the Sabres and clinch the franchise’s first trip to … ah, who are we kidding? It’s the Darcy Tucker hit.

• So it’s May 10, 2002, and we’re in Toronto for Game 5 of a second-round series between the Senators and Leafs. It’s late in the third and we’re tied at 2, both in terms of the score and the series. Alfredsson and Tucker are chasing the puck in the Leafs zone, and things are about to get controversial.

• Yeah, that was a little bit of a hit from behind. There’s no call on the play, because this was back when the referees’ whistles were specially designed to grow wings and fly away once the third period started. So as long as Alfredsson doesn’t score the winning goal like three seconds from now, we shouldn’t have a problem.

• And we’re going to have a problem.

• Leafs assistant coach Keith Acton is absolutely furious that he never thought of doing that during his career.

• This is probably the greatest moment in Senators history. I’m not even kidding. The Stanley Cup final appearance and the Presidents’ Trophy were nice, but if you hooked a Sens fan up to a lie detector and made them pick just one moment, I bet this one would win. That has a lot to do with how much they hate Tucker; remember, he once randomly dove into the Senators bench to try to fight the entire team.

• Curtis Joseph looks confused, which is a nice change from his usual post-goal routine against Ottawa of trying to murder the referee.

• Hey, is anyone else getting a weird noise over the top of this video? It’s loud and distracting and I’m not really sure what … I’m sorry, I’ve just been informed it’s the sound of fans making noise at the ACC. I’d forgotten what that was like.

• Alfredsson high-fives the bench, then turns around to give one of the most classic “Gosh, officer, what seems to be the problem” faces of all time. If he’d fake-thrown his stick into the crowd at this point, Toronto would still be rioting.

• In the background, we can hear the PA guy warning fans not to throw things on the ice, just in case anyone still has any Brophy’s Boys souvenir hats.

• Little fist-pump from Jacques Martin there! I think that’s the most excited Martin ever got. I don’t even mean in his coaching career; I mean in his entire life. Martin would look stoic going down a waterslide.

• We cut back to a shot of Tucker, who is apparently giving birth.

• Next comes a few replays, mixed in with shots of Alfredsson milling around with his teammates. This seems like a good time to remind everyone that we had a solid decade when there was an NHL player named “Bonk.” I feel like we didn’t appreciate that enough at the time. We should have spent the whole time making the same faces as the nice ladies in this photo.

• We get a one-second shot of an angry Gary Roberts, and then the camera immediately cuts away before he starts cracking skulls and/or mixing protein shakes.

• We close on a shot of legendary coach Pat Quinn, who died last week. He does not look happy. His postgame press conference is one of the greatest “quietly furious coach” performances you’ll ever see. “I quite frankly am full of anger.” Rest in peace, coach.

The goal stood up as the winner, as the Senators won the game and took the lead in the series. At the time, this hit threatened to start the Great Ontario Civil War of 2002. As it turned out, the Leafs came back to win Games 6 and 7, so everyone other than Tucker now agrees this hit was hilarious.

Last week, the Senators announced Alfredsson would rejoin the team to announce his retirement by posting a very nicely done video of his career highlights. You’ll never guess which play featured prominently.