NHL Grab Bag: Are You Mad About Bishop’s Injury? (Please Say No.) 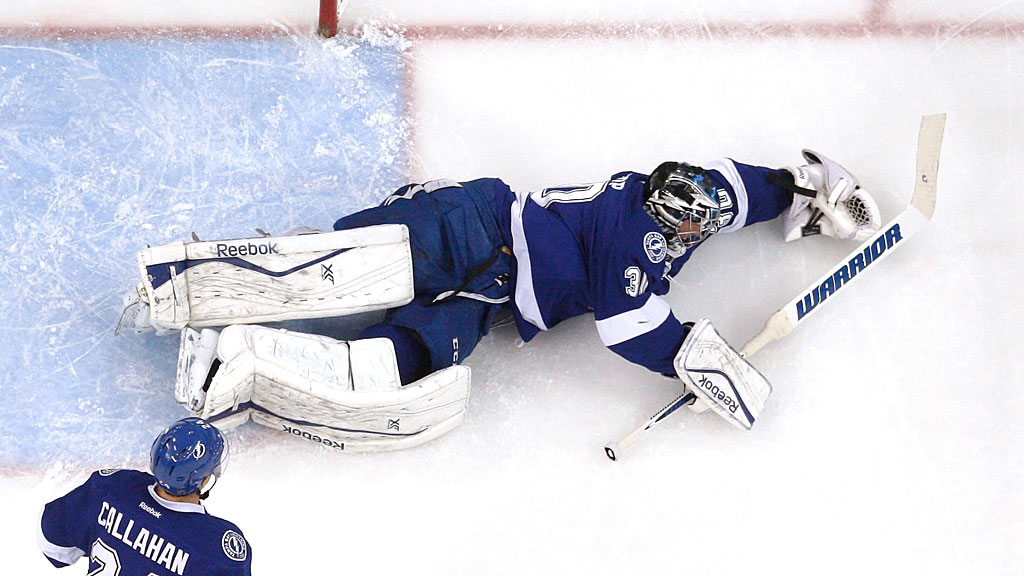 Welcome to a weekly grab bag of thoughts and observations from the past few days and/or decades of hockey.

The third star: We are all this New York Islanders security guard
Tuesday’s Senators-Islanders game was a bit of a snoozer. Literally.

The second star: The Washington Capitals season is not ending well
Hey, at least nobody quit on the play. Right, Coach?

The first star: Chris Rooney could use some help here you guys
I tell you kids, the game’s gone soft. Back in the day, referees didn’t get all upset in the middle of a fight just because a combatant’s head fell off. 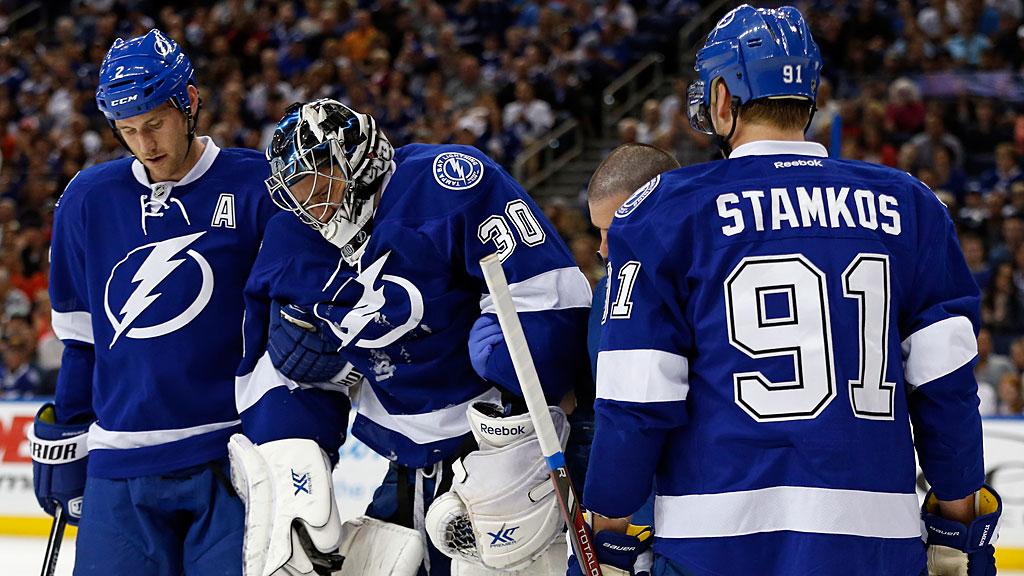 Nothing makes hockey folks happier than being outraged about something relatively unimportant. We’ll pick one topic fans are complaining about and try to figure out if it’s justified.

The Issue: A star player, in this case Tampa Bay’s Ben Bishop, was hurt in the last week of the season, seriously damaging his team’s Stanley Cup hopes.

The Outrage: Why was he even playing in the first place?

Is It Justified? No. Stop this. The NHL schedule is 82 games long, which means that’s how many games a team is expected to dress its best lineup. It’s one thing to shut down a player who’s already hurt, like the Blackhawks are doing for Jonathan Toews and Patrick Kane. That’s common sense. But it doesn’t mean that teams should roll every decent player up in bubble wrap and hide them in a bunker until the playoffs start.

You’ll notice that nobody ever complains about this sort of thing until after an injury, at which point everyone wants to know why that specific player was in the game. Hindsight is fun, but the coach doesn’t have a crystal ball that tells him who’s going to get hurt.

And yes, Bishop had been playing a lot lately, and he probably should have been given an extra game or two off along the way. But the Lightning are fighting for home-ice advantage in the first round, so it’s not like they have nothing left to play for. And Bishop didn’t suffer a fatigue-related injury. He fell awkwardly on a weird play. It’s a tough break, but it happens.

Just like other injuries happen, all season long. Unless you expect your coach to somehow know when and where they’ll occur, stop blaming him for dressing his best players. 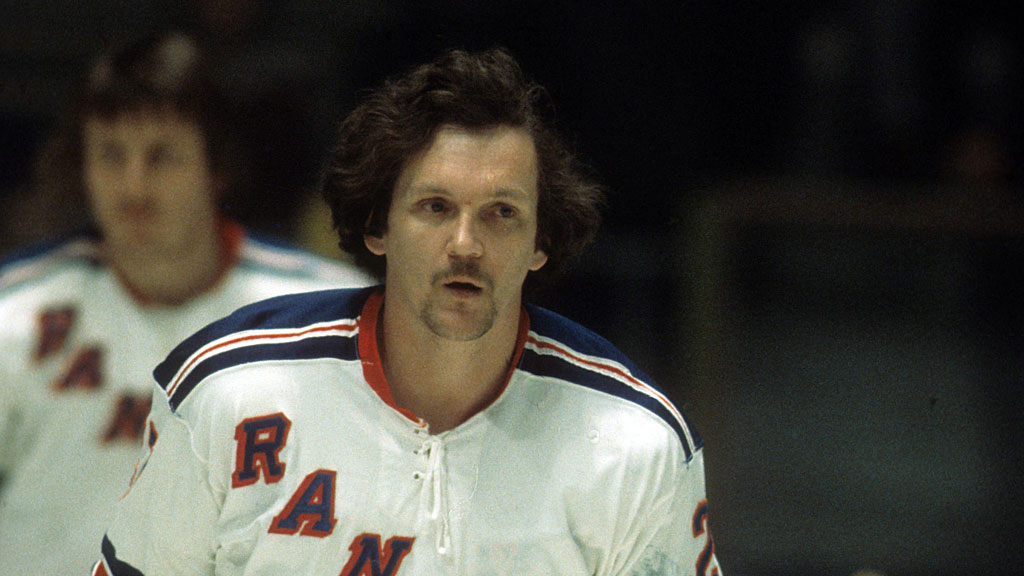 Irvine was a hard-nosed winger in the ’60s and ’70s who was best known for his physical game. He originally came up through the Bruins system, but didn’t crack the NHL until the 1967 expansion doubled the size of the league, opening up a job for him on the inaugural version of the Los Angeles Kings.

Irvine was a heavy hitter, but he could score a little bit, too, posting a career-high 26 goals with the Rangers in 1973-74 and recording 15 or more in five other seasons. Of course, he’d also drop the gloves every now and then, mixing it up with everyone from feared heavyweight Dave “Hammer” Schultz to superstar legend Bobby Orr before retiring in 1978.

But despite those scraps, Irvine didn’t have quite as many career bouts as his son Christopher. And he never did make quite as impressive an entrance, either.

In which I complain about things that probably only matter to me.

So the regular season is almost over, and all but one of the league’s 16 playoff spots have already been locked up. If you go to the NHL website and check the standings page, you’ll see the usual assortment of letters showing up next to team names: “X” if they’ve clinched a playoff spot, “Y” for a division title, “Z” for the conference. And, according to the handy legend, “P” for the Presidents’ Trophy, because apparently whoever was in charge of this was an idiot and ran out of letters.

Which is all fine. But why isn’t there a symbol for “eliminated from the playoffs”? That’s more important, right? Showing us which teams are in without telling us who’s out is kind of pointless. I know the NHL wants to stay positive, but we’re all big kids here. So let’s start with the shaming.

One problem: I’m not sure what letter you’d go with. “L” for loser? “F” for failure? “G” for golfing? Or do you just go with the obvious and slap a frowny face emoji on there?

I’m open to ideas, but this needs to happen. Embrace your loser teams, NHL.com. Give us the badge of shame!

Whether it’s “Coach’s Corner,” his regular media appearances, or a Twitter account that’s presumably meant to be performance art, Don Cherry is everywhere. What has he been up to this week?

This week, Don Cherry tried to pronounce “Jacoby Ellsbury.” Given his success rate when he sticks to his own sport, it went about as well as you would expect it to.

Last week we enjoyed the spectacle of Dominik Hasek going all Dominik Hasek and whipping his blocker at a guy’s head. But one of the best moments in that clip came from an old friend, referee Kerry Fraser, who happened to be miked for the game and could be heard loudly accusing Hasek of a “deep six” dive.

Well, if you enjoyed that video, then you’re in luck, because today we’re going back to 1986 for five solid minutes of a miked-up Fraser yelling at people.

• So this clip is from a Rangers–North Stars game played on February 24, 1986, and is airing on a Hockey Night in Canada broadcast a few days later. Host Dave Hodge intros the footage, and manages to get through it without flipping any pens.

• I like how the narrator specified that it was a wireless mic. Just in case you were worried that he was dragging a bunch of cables around the ice.

• First things first: Like all of you, I’m completely thrown off by Fraser’s hair here. Where’s the classic Fraser pompadour? Did he just get out of the shower? Did his mom make him put a hot facecloth on his head while he ate his cereal because it was picture day at school? Is he starring in some sort of body-switch comedy with Jon Gruden? I may need a minute to compose myself.

• After some banter with Rangers goalie (and future Capitals coach) Glen Hanlon, Fraser gets cornered by Dino Ciccarelli, who wants to tell him about a game in Chicago. Fraser pretends to care for about 15 seconds, then executes the “slowly glide backward away from the boring story” move. I cannot tell you how much I wish you could do this in everyday life. I think I would use it a dozen times a day on my kids alone.

• Now Fraser is giving some defensive tips to Stars forward Brian Lawton. Tragically for future Tampa Bay Lightning fans, he does not give him any tips on being a general manager.

• Fraser chirps at someone that “it’s always a power play when you’re out there,” and then follows that up by debuting what I assume went on to become the patented Kerry Fraser “sick burn” face.

• We now move on to a segment in which Fraser and the assembled players spend an agonizingly long time figuring out who should serve which parts of a double minor. I’ve been a hockey fan for more than 30 years and I’m still never 100 percent confident I understand how that all works. I’m glad to know I’m not the only one.

• “Woody, I don’t need you here, thanks.” Yep, definitely been there.

• By the way, “Woody” is Stars pest (and current Oilers assistant coach) Keith Acton. That the hockey nickname “Woody” was given to a player whose last name wasn’t “Wood” is a bigger upset than the Miracle on Ice.

• Fraser’s attempts to explain all of this to North Stars captain Craig Hartsburg prove completely futile. And yes, that’s the same Craig Hartsburg who went on to coach the Ottawa Senators. I have no idea why every player Fraser talks to in this clip went on to a career as an NHL coach or GM, by the way. It’s weird, right?

• Oh look, it’s Fraser calling a high-sticking penalty. I’d have more to say on this, but the restraining order advises against it.

• After another scrum, Fraser is trying to explain to Acton that we’re still playing five-on-five. “Just get her going,” he pleads, but it doesn’t work, because in the next shot he’s over explaining it to the Rangers. After watching this clip, I’m amazed an NHL referee has never slapped a player. I have new respect for these guys.

• “That is confusing, you know.” Yeah, I officially don’t feel bad for having trouble with this.

• Fraser dodges a bodycheck by briefly turning into Ed Grimley, then comes in for some verbal abuse by Willi Plett, leading to this exchange: “This is your worst game of the season!” “Nah, they’re all about this caliber.” This clip is making me like Fraser, and I hate it for that.

• Now Neal Broten is complaining about something. I miss the days when most of the league’s players wore the exact same light blue undershirt that was clearly visible under their jerseys. Did everyone stop wearing those? Or do we just not see them anymore because the players no longer strip down to the waist after every fight? Somebody with an NHL press pass really needs to dig into this.

• Our last shot is of Fraser muttering “credit where credit’s due” at Rangers backup John Vanbiesbrouck, at which point they immediately freeze like it’s the last scene from a mid-’80s sitcom.

The Rangers won the game, 5-1, in case you were wondering. Fraser would go on to set the league record for games officiated, and he worked as an NHL referee until retiring in 2010. He now writes a column for TSN in which he breaks down controversial calls.

If you watch that last bit with Vanbiesbrouck carefully, I think you can pinpoint the exact moment Fraser thinks to himself, Hey, maybe I should try wearing my hair like that.

Is Terrence Ross Ready to Make the Playoff Leap?