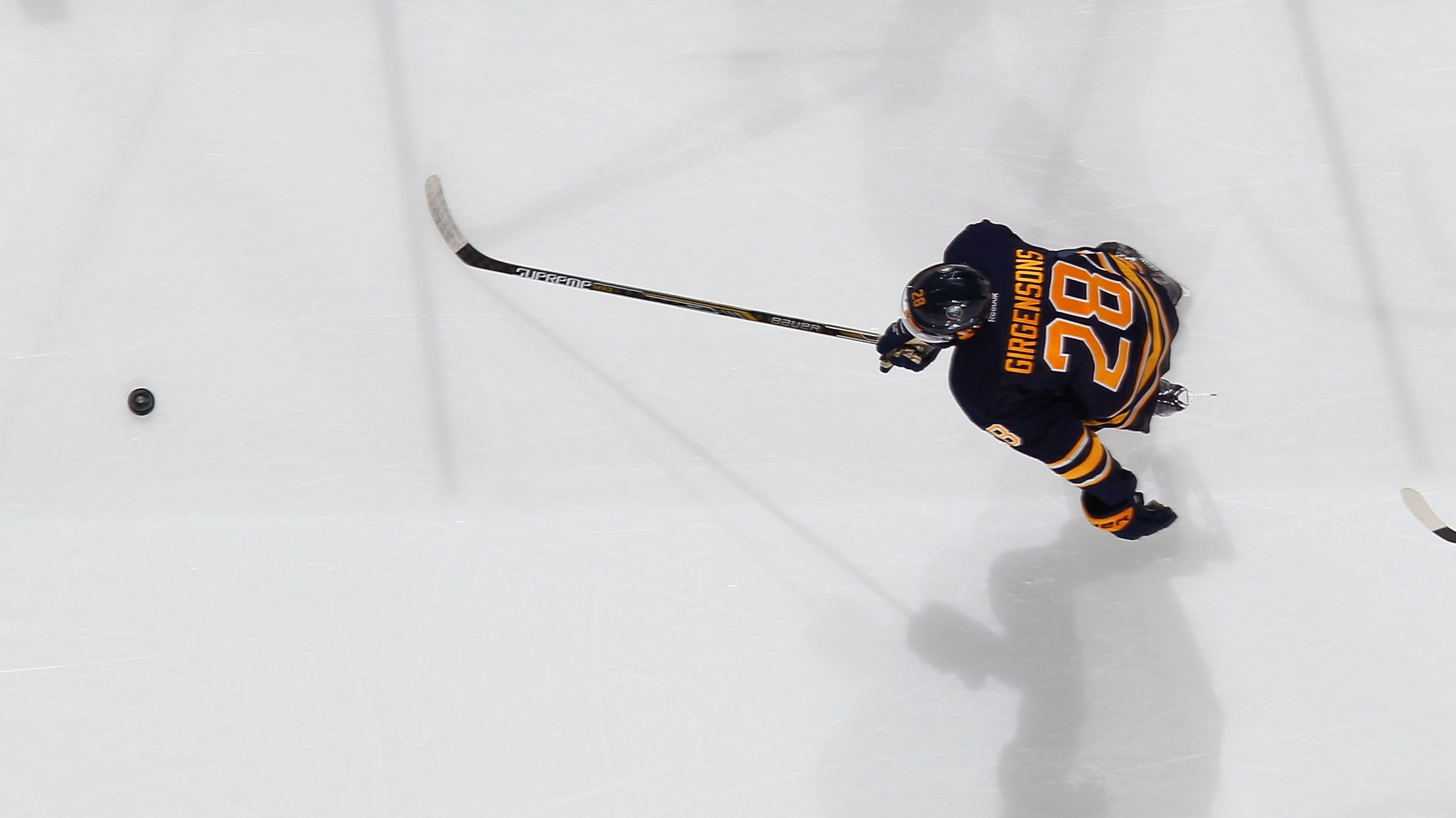 Quick, name the most hockey-obsessed nation on the planet. It’s not what you think. Canada is so yesterday, Russia has way too much on its plate right now, the U.S. is fickle, and Finland has got to be in a post-Selanne retirement funk. Sweden has a case, I suppose, but not really — not when compared to the one true king in this contest, Latvia.

Have you ever said aloud, or even heard, the name Zemgus Girgensons? If so, there’s an excellent chance that you’re either a depressed and snowbound Buffalo Sabres fan … or you’re one of Latvia’s 2 million or so citizens. On Monday, the NHL released its All-Star voting totals after the first two weeks of balloting. In the top five were familiar player-brands like Patrick Kane, Jonathan Toews, Sidney Crosby, and P.K. Subban. The highest vote-getter, though, by nearly a factor of two? Zemgus Girgensons.

“Some people take shower when they wake up, some eat, we Latvians vote,” one Twitter user explained to baffled Buffalo News beat writer Mike Harrington. Latvia picked up some international attention during the Olympics with its zany fans and nostalgic reverence for 41-year-old (at the time) team captain Sandis Ozolinsh, who played in the All-Star Game seven times and won a Stanley Cup in his NHL career. But it’s far from an every-four-years thing: Fans in Latvia love hockey, love their KHL team, Dinamo Riga, and flat out adore players like Ozolinsh and Arturs Irbe. Latvians wake up at all hours to watch games out of devotion and pride; is it any surprise that they’d vote again and again and again — the NHL allows people to cast ballots up to 10 times a day1 — for the 20-year-old Girgensons?

When the voting results came out, the poor kid, in just his second year with Buffalo, was described by multiple writers as “sheepish”; he made sure to praise his crazy countrymen while also noting that “there’s not a lot I have to do with it.” But later last night he reacted in the best possible way, batting successfully at a rebound late in the third period against the Tampa Bay Lightning to tie the game. The Sabres would go on to win in overtime. (It was their sixth win in seven games, which suggests the players haven’t gotten the tanking memo.)

It’s been a sad couple of weeks for the hockey world, which is reeling from the illness of Gordie Howe and the recent deaths of boisterous coach/exec Pat Quinn and elegant Habs legend Jean Beliveau. The success and promise of the sports’ young players is what keeps everyone moving forward even in these tough times, and Girgensons’s story is far from the only one that can help cheer us up. Here are a few other rising stars to keep an eye out for, even if they may not have gotten quite as many — if any — All-Star votes.

The diminutive 5-foot-9-on-a-good-day Gaudreau earned the nickname “Johnny Hockey” as a phenom at Boston College, and his play for the USA junior national team helped cement him as a player to watch. (He was on the 2013 squad that won gold over Sweden in Ufa, Russia; he also won a national championship as a freshman at BC as well as the Hobey Baker.) This summer, against players much older and way more enormous, he scored twice in the World Championships.

He stayed at college longer than many in his position. After being drafted in the fourth round by the Calgary Flames, he played three seasons at BC. This year didn’t technically mark his NHL debut — he suited up for one game for the Flames at the end of last season — but he’s played beyond most expectations in his first full NHL season, prompting even his teammates to go YouTube his old college highlights in surprise.

Gaudreau is second among rookies in scoring, having contributed four goals and 15 assists, and his Calgary Flames have been one of this season’s bigger surprises — if the playoffs started today, they’d be involved, even in the terrifying Western Conference.

This is the one guy who leads Gaudreau in scoring among rookies. Forsberg, a 20-year-old from Sweden (no relation to Peter) was drafted by the Washington Capitals in 2012 and dealt abruptly to Nashville in the spring of 2013.2 He played few enough games that he qualifies for the Calder Trophy this season and has to be considered the front-runner. He has more goals and assists than any of his Nashville teammates, and he’s done so in a way that isn’t just some hot streak — he’s averaging well over three shots a game, a number that puts him among the top forwards in the league.

“My role is to play offense and score goals for the team, just try to contribute in the goal-scoring department,” he told The Tennessean, sounding more like a middle-management office drone than a player who had just been named the NHL’s Rookie of the Month. “Hopefully they can keep coming.”

The first time I saw Bjugstad play was in the fall of 2012, when I was doing a story on the University of Minnesota ice hockey team. As I wrote then, Bjugstad — a Minneapolis-area native whose uncle had played for the Gophers, the 1984 Olympic team, and the North Stars — was the kind of player who brought fans instinctively to their feet every time he touched the puck and who at 6-foot-6 had “the kind of raw size that makes you think in creepy phrases like ‘good stock.’”

This last observation came true the other day when I was watching NHL highlights and heard some announcer or another refer to Bjugstad with that good ol’ hockey assessment: “He’s a biiig boy.” The 22-year-old has certainly been playing like one this season. He scored 11 points in 13 games in November, including a game against the San Jose Sharks in which he scored both Panthers goals in regulation and added the game winner in the shootout. “He was hot,” his coach explained. Bjugstad is part of a Florida team that is brimming with young talent, from defenseman Aaron Ekblad to forward Jonathan Huberdeau. There’s a good chance you’ll be hearing these names more often from now on.

Like Bjugstad, Tarasenko is 22, perhaps a little older than some of the guys on this list but still a relative NHL breakout player nonetheless. In his first NHL game two seasons ago, Tarasenko memorably scored on his very first shot and added another highlight-reel goal. But that was nothing compared to the run he has gone on this season. He has 26 points in 24 games and is tied for fourth in the league in goal scoring.3 In early November, he made the New York Rangers look like Daria playing volleyball:

I’m a Rangers fan, and even so, once he smoked Dylan McIlrath — whom he was drafted behind, whyyyyyyy — I was actively hoping he’d go on to score. (Most players only try that last move, called “the Forsberg,” in the controlled environment of a shootout.) The goal was so gorgeous that it caught the eye of an artist named Ben who hand-draws little flip-books for fun and profit. “I have to admit I don’t watch much hockey,” he wrote on his YouTube page, “but I think this goal hypnotized me into making a flipbook. It’s just beautiful.”

He scored again in a similar manner shortly after and has continued to rack up points. On Friday, his overtime goal lifted the Blues over the Oilers in a comeback victory (he also assisted T.J. Oshie on an earlier score). On Saturday, he gave St. Louis a 1-0 lead over the Minnesota Wild and later, in a shootout, netted the game-winning goal. He earned NHL star-of-the-month honors for his 10-goal, 17-point November.

“There’s very few players that score like this in our game,” Blues GM Doug Armstrong was quoted as saying a few weeks ago in an outstanding Tarasenko profile by Yahoo’s Nick Cotsonika. “Now his test is, can he do it over time. That’s what separates hot streaks from great players … Can he do it over one year, three years, five years, 10 years?”

That’s the question you can ask of any of these players. There are umpteen other guys who will be, or already are, better NHLers; this is far from an exhaustive list. But it’s exciting to see the next generation beginning to take shape, to see the once disparate and now converging paths of these young guys from places like Sweden and the United States and Siberia and, most influentially, Latvia.