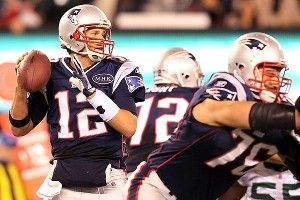 Last week, we noted with excitement that the Cantor Gaming sportsbooks in Las Vegas had posted lines for the first 16 weeks of the NFL season. In our hearts we longed to see the team over/under lines get posted for public consumption. It’s the first great look of the year into how the betting public really feels about the league’s teams, and it was actually a spot of improbable profit for us last season. Last year, since we weren’t living in Vegas, we could only dream about the joy of seeing a fresh year’s lines go live and sprinting out to the casino to get our action down.

On Wednesday morning, we were awoken by a flood of joyful texts from fellow degenerates. Cantor had pushed the first set of over-under team bets onto the boards in their Vegas books. Was it like Christmas? Well, it was like Christmas if you were to wake up, run downstairs, and give your money to someone to then get gifts eight months later. While an offshore bookmaker had published lines with small maximum bets beforehand, the Cantor sportsbooks at the Venetian, Palms, Tropicana, and other Vegas casinos were again the first ones to get one of the year’s most tantalizing opportunities up for action.

This is the part of the article where you stop reading the text and scan the table to find your favorite team’s betting line for the year. So let’s just get to that before we start discussing things. As a refresher, let’s break down the first line of the table and the odds for the New England Patriots. Their listed win total is 12.0 wins. The “over” bet would be a winner if the Patriots win more than 12 games; so, in other words, if they win at least 13 games. The odds on that bet are at -120, meaning that a $120 bet would return $100. In the table, we’ve included what your return would be if you went up to the counter and bet $100 on each of the bets in question, so a $100 bet on the Patriots to go over 12.0 wins would return a profit of $83.33 if the Patriots did win 13 games. A bet on the under, at a line of -110, would come through and pay out a profit of $90.91 if the Patriots fail to win 12 games or more. (If the Patriots finish 12-4, your bet would be refunded to you without any profit or loss.)

Here are the initial odds that Cantor posted on Wednesday morning:

No enormous surprises, right? We put together a sheet of guesses at what the win totals would be (focusing on the idea of getting even amounts of action on either side of the line, as opposed to what we think the actual win-loss totals for each team would be) a couple of weeks ago, and there wasn’t a whole lot of disparity. Of those, 11 of the win totals were exactly the same, 14 of them were within a half-win, and the other seven were one win apart.

Now the fun begins. By the time we got to the Cantor book at the M Resort in nearby Henderson to check out the numbers for ourselves, six of the lines had moved, including three swings that would qualify as dramatic. Remember, these are the initial impressions of bettors looking at these totals, so while things could change in the future, these movements represent the initial signs of what the Vegas market feels about these few particularly volatile NFL teams. As is often the case with over-under lines, most of the initial action has come in on the Under bets, which is what’s happened with five of these six line movements. For some reason, it seems like it’s easier to imagine “There’s no way this team gets to X wins” than “There’s no way this team doesn’t win at least X games.”

Here are those six line movements. Now, while most of the action has come in on one side of the Over/Under bet, note that the casino will adjust the odds on both sides to make the less popular bet look more palatable. The table rows that are bolded below represent the sides of the Over/Under bets that are getting more action. Remember: The larger the line movement, the heavier the action.

The most dramatic line movement belongs to the Denver Broncos, who have taken heavy action on their Under 9.5 wins bet despite adding Peyton Manning to an 8-8 playoff team from last season. A $100 bet on their under total is paying nearly $28 less than it did when the lines were first published. It’s easy to figure out why. The Broncos were a team that had the point differential of a 5.8-win squad last season, and while Manning will help, he’s going to be facing a schedule that includes the teams from the AFC North and NFC South, as well as matchups against the Patriots and Texans. A similarly tough out-of-division slate has driven some action on the Chiefs going under 8.0 wins.

Wednesday’s initial action otherwise focused mostly on the NFC South, where the Bountygate scandal remains the murky cloud hanging over the division. Putting a line up for the Saints is unpleasant no matter where you set the figure; seemingly no team in recent memory has had a wider variance of possible outcomes, with any record from 13-3 to 7-9 feeling entirely plausible for Drew Brees and company. So far, the action seems to lean towards the Saints going under the listed 10-win total, which has begun to flip the Over line into being an underdog. In other words, if you bet on the Saints to go over 10 wins at -125 on Wednesday morning, you’re going to feel like a fool when they’re listed at +125 for the same bet on Saturday afternoon.

That movement has also produced a slight bump in bets on the Panthers going over 7.5 wins, but it’s surprisingly been met with a large amount of action on the Buccaneers going under their six-win total. Bettors might have their doubts about Greg Schiano and the availability of star corner Aqib Talib, but it’s hard to imagine that Schiano won’t be an upgrade on Raheem Morris, especially after the team quit on Morris halfway through last season. The free agent investments that Tampa made during the offseason also haven’t motivated bettors, and they might have their doubts about Tampa’s ability to compete against a tough schedule, both inside and outside (AFC West and NFC East) of their division. Then again, the two games they were assigned based on their last-place performance from a year ago nets them games against the Vikings and Rams, which should represent friendly opposition.

This is where betting on over-unders becomes a game of predicting both the betting market and the moves made by casinos. It’s clear that the market is heavily against the Bucs winning more than six games. If you want to bet the over on the Buccaneers, do you take their line at over 6.0 wins and get the very friendly payout schedule of +155? Or, instead, do you hope that the casinos run from that number and move the win total down to 5.5 wins at -110 or even -120, turning a 6-10 record from a push (or tie) for the Over bet into a victory? No, really, can you please tell us? We want to get that bet down pretty soon.

OK, we’ll admit that we want to get some Buccaneers over if it gets to 5.5 wins. And that Broncos under 9.5 wins figure looked pretty tasty at -120. Oh well. We’ll talk about the over-under bets we’ve made (and will continue to make) as part of our season preview in August, but as the offseason goes along and other sportsbooks begin to post their NFL over-under lines, we’ll discuss them in this space.

Where Has the Olympic Flame Been Lately?