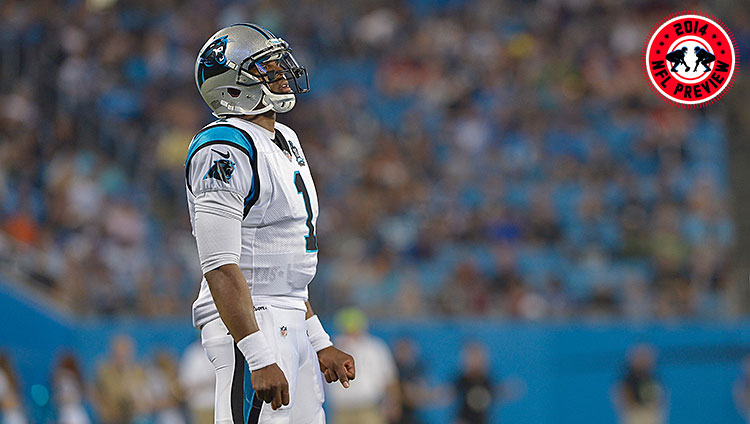 One of my favorite traditions every year in football is regression season. It’s those three or four weeks in August where everyone’s quoting DVOA and adjusted win totals and point differential, all in the name of guessing which of last year’s good teams will disappoint everyone this season. We look around the league, asking, “Are they the regression team?” roughly 8,000 times before the season.

It used to be that this would make you sound smart, but thanks in part to people like Bill Barnwell, Robert Mays, and Chris Brown, the word regression is ubiquitous with football fans now. It happens every year, and at this point everyone plans for it. Some of this is by design. The NFL schedules favor the worst teams from the previous year, so every season we get a team like the Panthers or Chiefs that may not be as good as its record suggests … and then nine months later that team becomes the obvious choice for regression.

Those aren’t the fun teams, though. The best regression candidates are the ones that come out of nowhere. There are always one or two teams that were really good the year before and that just collapse. The only question for regression season is which one it’ll be.

I love it. In the name of being smarter fans, millions of us spend an entire month looking at last season’s playoff teams, wondering which one might suck this year. It exposes how clueless we really are about the most scrutinized sport on the planet. No matter how many formulas we have, everyone is basically guessing. Nobody saw the Texans and Falcons finishing at a combined 6-26.

So in the spirit of regression season — and guessing — here’s my completely unscientific look at playoff teams that will slide into mediocrity this year. We’re doing this the old fashioned way, too. No DVOA, no win totals, just some good ol’ fashioned gut feelings and completely arbitrary probability ratings.

Let’s do it. The first two are obvious.

They Might Regress: This hurts my heart. No team in football was more fun to root for last season than the Panthers. Between Cam, Steve Smith, Mike Tolbert, Ron Rivera’s transformation into Riverboat Ron, Luke Kuechly, Greg Hardy, and the whole wrecking crew on defense … it was all great. Since then, two things have happened.

First, Panthers GM Dave Gettleman cut Steve Smith. For the record, I know Dave Gettleman’s name only because he was the GM dumb enough to cut Steve Smith. He’s famous now. Regardless of what you think of aging wide receivers, it was just a terrible decision from a karma standpoint. They’re destined to fail now. They also didn’t sign any receivers to replace him (Jason Avant and Jerricho Cotchery do not count), which seems unwise, considering the Panthers’ offense had trouble scoring even with Smith around last year.

That’s before you consider the rest of NFC South — the Saints will be as good or better, the Falcons and Bucs should be much better than last year — that will wear them down week to week. So, let’s see. This team shocked everyone by winning a bunch of close games last year, got worse this summer, and now it has a tough schedule that’s extra brutal in October and November. Of course the Panthers are going to crash back to earth, while the whole world asks, What’s Wrong With Cam Newton.

The second thing that happened was Greg Hardy involved in this domestic-violence incident that sounds so horrifying, it almost feels like a parody of NFL offseason news. So that’s cool.

Also, here’s the obligatory shot of owner Jerry Richardson looking like a cartoon of an evil rich guy: 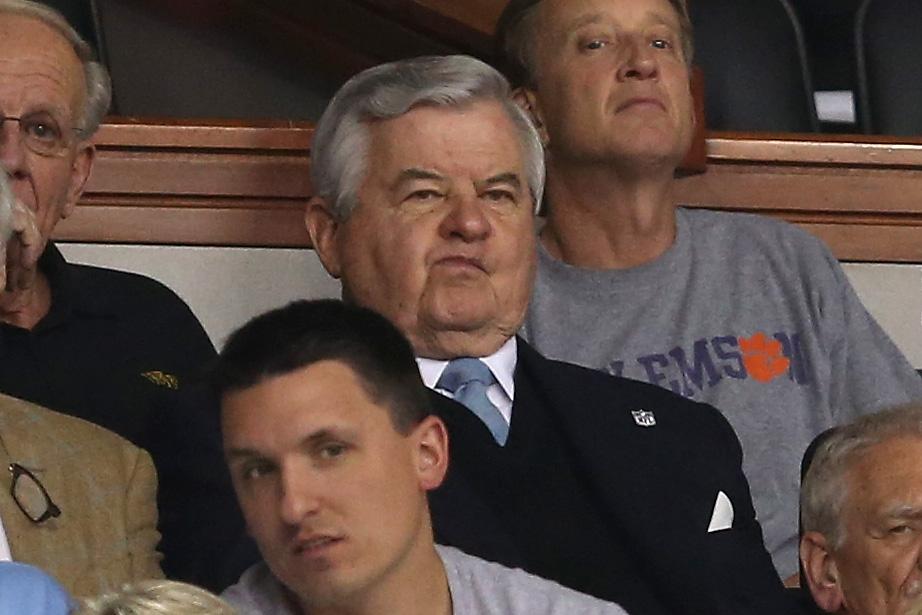 Feel bad for the death of the feel-good Panthers, but don’t feel too bad.

They Might Not Regress? Maybe this will all unite the locker room. Maybe the defense is still good enough to carry them. Maybe rookie wideout Kelvin Benjamin will just eat defensive backs and catch 18 touchdowns from Cam Newton. Panthers against the world? Maybe Ron Rivera’s much smarter than you think and the NFC South’s not as good as you think. But probably not.

Regression Probability on a Scale of 1 to 10: 9. Blame Gettleman.

They Might Regress: This Chiefs team really wasn’t that great to begin with, last season. If they’d been a stock, people would have been shorting them as early as Week 4. Remember when they were undefeated and everyone just kept talking about the Broncos as the best team in the AFC? That’s because everyone knew the Chiefs were still the Chiefs. No amount of winning could make us take them seriously. This year, they have a tougher schedule — they have to play the NFC West, plus the Patriots — with mostly the same team that finished the season going 2-6 after the bye week, including one of the most heartbreaking playoff losses this century. It doesn’t look great.

They Might Not Regress? Too many people are picking the Panthers and Chiefs to suck this year. One of them will shock the world and not be awful. If you had to choose, wouldn’t you take the team with a better coach, weaker division, and more stability on offense? Believe in the Chiefs.

Believe in the Chiefs, even if it still feels insane to say that out loud. They may not win 11 games, but they will sneak into the playoffs again. People trash Alex Smith so much that they forget he’s actually a perfectly decent quarterback. It’s easy to make fun of Andy Reid for a handful of horrible decisions, but on the whole, he’s better than at least 75 percent of the coaches in the league. The defense will be solid again, Dwayne Bowe has been called overrated so often that people forget he’s still better than most teams’ no. 1 receiver, and they also have De’Anthony Thomas, the 176-pound running back/receiver/demon destined to tear apart special-teams units and win hearts all across America. Oh, and speaking of demons, Jamaal Charles is back to wreak havoc all year long. BELIEVE IN THE CHIEFS.

No, But They Might Regress Despite All That: Always dangerous to believe in the Chiefs.

Regression Probability: 6. But a strong 6.

They Might Regress: Marvin Lewis. Andy Dalton. If you ranked the QB/coach combinations among last year’s playoff teams that inspire the least confidence, this would be your clear winner. The first half of the Bengals’ schedule is tough, too — includes at Ravens, at New England, at Indy, Falcons — meaning that things could fall apart early, leading to a Texans-like spiral.

This isn’t even about Dalton, though. It’s more a Lewis thing. He’s been the coach in Cincinnati since 2003, which puts him behind only Bill Belichick on a list of the longest-tenured coaches in the league. Tom Coughlin is third, with 10 years coaching the Giants. Marvin Lewis is a lot like Coughlin and Belichick, except instead of five Super Bowl wins, he’s got five wild-card playoff losses.

It has to end sometime. 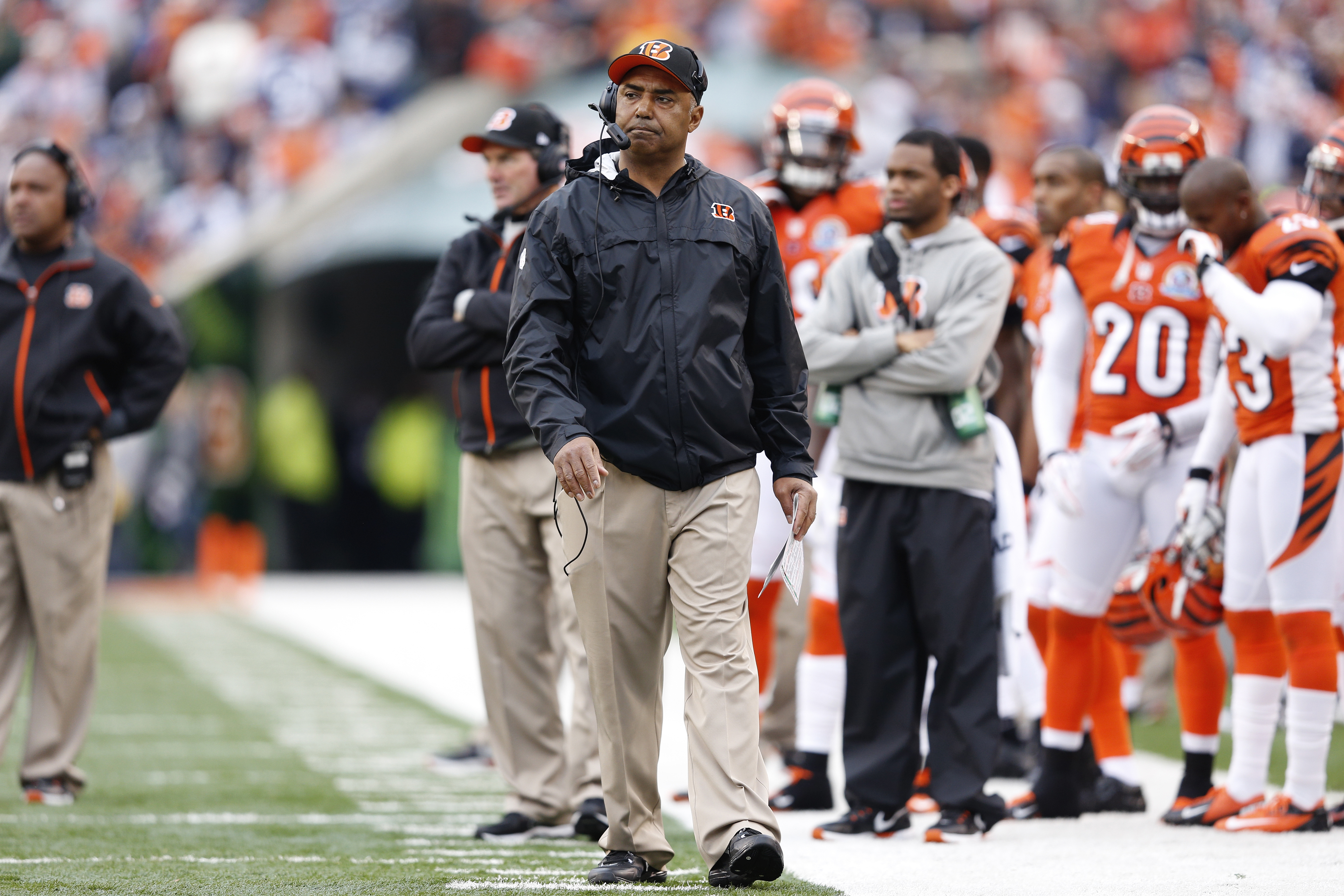 They Might Not Regress? A.J. Green is the most inhuman player in football not named Calvin Johnson. The defense will be solid. Dalton could be better than people think. And the AFC North could be juuuuuust mediocre enough for the Bengals to steal it. Marvin Lewis probably doesn’t have superpowers that allow him to barely survive each year and coach the Cincinnati Bengals until the end of time, but he might.

Regression Probability: 8. And if it means no more wild-card misery with Marvin, maybe it’s for the best.

They Might Regress: The defense reloaded with DeMarcus Ware and Aqib Talib, and Von Miller will be back. On paper they had a killer offseason. But the teams that have killer offseasons are always a little dangerous. Big-name veterans are risky in any sport, but in football, those gambles almost always end badly.

But Peyton, you say.

Right, Peyton: The entire season hinges on the health and production of 38-year-old Peyton Manning. He’s the single biggest reason Denver is the favorite to win the 2015 Super Bowl, and he’s the single biggest reason everyone should be careful before they trust this Broncos team to keep it together for the next four months. Every contender would be screwed if its starting quarterback went down, but only Denver is rocking with a 38-year-old whose success was already defying all logic last year. Remember when Brett Favre led the Vikings to an NFC title game? What happened the following season? That’s why the Broncos are dangerous.

They Might Not Regress? I’m too much of a coward to really doubt Peyton. No better than anyone else. Plus, Broncos Manning has actually been a lot of fun to root for, the past few years. I don’t want to bring the party down.

Regression Probabillity: 5. But don’t be surprised …

They Might Regress: The Niners’ defense should be good again, but it’s hard to imagine they’ll be great like the past few years. They lost Donte Whitner/Hitner in the secondary, and more important, they’ll play the first half of the season without NaVorro Bowman and Aldon Smith, two of the best defensive players in the entire league. The season hasn’t even started yet, and the Niners already have all kinds of bad luck.

Related: The 49ers have lost their first two preseason games by a combined score of 57-3. Maybe this isn’t cause for concern, because preseason football is meaningless. On the other hand, one of the reasons they’ve been getting destroyed like this is because the backup quarterbacks in San Francisco (Blaine Gabbert, Josh Johnson) are just that horrendous. 57-3 is how Blaine Gabbert’s entire career has gone.

Paying Colin Kaepernick this summer was a no-brainer. But for someone who runs that often in a division full of outrageous defenses, not having a decent backup plan is insane.

If he stays healthy, we’ll get the same Kaepernick of old — a few unbelievable games, a bunch of ordinary games, and one or two games where he’s unbelievable and then ordinary (like last year’s NFC title game). But this year, it all comes with a running game that won’t be as good (Frank Gore is 31, Carlos Hyde hasn’t done much this preseason), and a defense that won’t be as dominant. Maybe Kaepernick’s good enough to keep things clicking like usual, but he’ll have to be better than he’s been the past two years. It just seems like it’s all setting up for year of struggles with Kap and Jim Harbaugh and the Niners, followed by the inevitable season of redemption next year.

Is this all mostly a gut feeling? Absolutely. Every year people pick the Niners to take a step back, only not many people are predicting it this year. That’s how you know it’ll happen.

They Might Not Regress? N/A. It’s the season for bold predictions, just go with it. It’s fun to root against Jim Harbaugh.

Regression Probability: 10. And so many Harbaugh faces where it looks like he just smelled a fart. Football season! 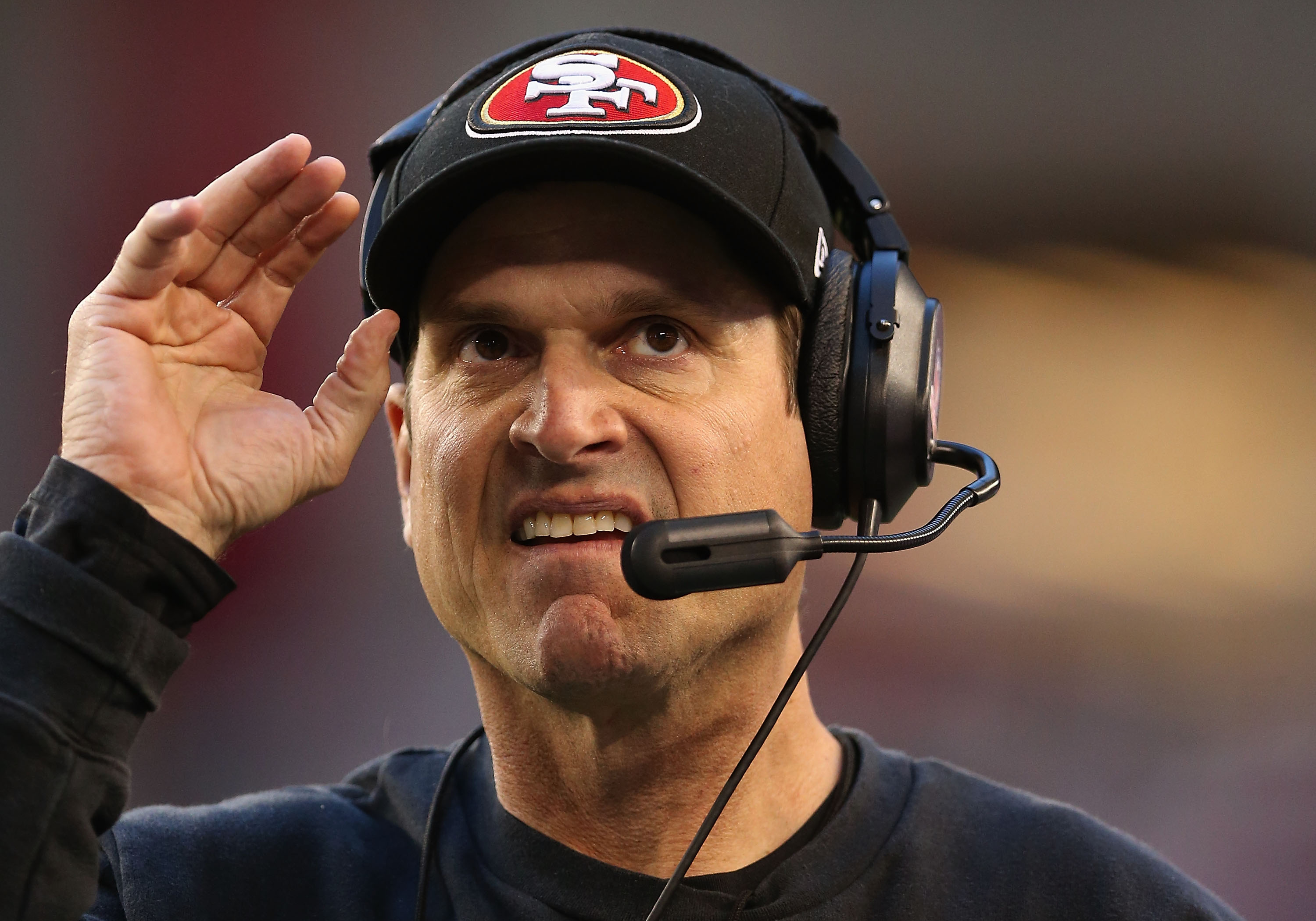