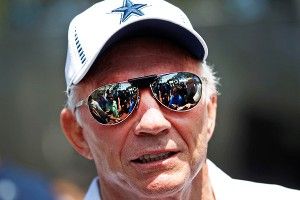 My dog Rufus has three talents and only three. He can dog-paddle into the Pacific Ocean, battle the waves and retrieve tennis balls for hours no matter how far you throw them. He can weasel into any garbage bag with already-eaten barbecue ribs in it — no matter how tightly you seal the bag, no matter how much time you spent saying, “We have to make sure that Rufus doesn’t get into the garbage” — much like Danny Ocean’s gang can break into any Vegas casino. And after he devours those disgusting barbecue bones, he will crap on at least one rug or kill himself trying. You could give Rufus 500 yards of hardwood floor and two inches of rug and he’d figure out how to crap on the rug. That’s just his thing.

On Saturday night, we made it too easy for him: Some friends came over, some barbecue was consumed, there was some sloppiness with garbage-can maintenance … you can guess what happened next. Suddenly, it became a staring contest. My wife and I weren’t letting it happen this time. We made Rufus sleep in our room and removed the rug. We shut the door so he couldn’t escape. When our son made an unexpected middle-of-the-night visit and climbed into bed with us, we both woke up and said simultaneously, “We have to shut the door.” We made it through the night sleeping with one eye open. No rugs were ruined.

The next day, a somber Rufus laid low and only unleashed one poop (on a walk) that wasn’t nearly as hellacious as we expected. Hmmmmm. Maybe he didn’t eat as many bones as we thought. He slept for much of the day. My wife tried to walk him on Sunday night; he wasn’t interested in going that far. He was roping us into his poop vortex, only we didn’t realize it yet. We were getting suckered by a golden retriever with a 30 IQ. That night, we fell asleep with Rufus lying on the floor next to our bed — with our door shut, just to be safe — only when our son snuck into our bed again, this time, we didn’t wake up.

It was the only opening that four-legged bastard needed. The next morning, my wife went downstairs first to make coffee. I was still half-asleep and wondering how our snoring son had gotten there. Suddenly, I could hear my wife screaming. Bloodcurdling screams. Screams you’d make if you found dead bodies in your house. Screams like the babysitter made in When a Stranger Calls.

Only this was a different kind of mass murder. See, Rufus had decided to kill not one but two rugs in our house. He pooped everywhere he possibly could. There was real strategy to the pooping, too. His ability to completely avoid the hardwood floor while obliterating two rugs was almost supernatural — like Aaron Rodgers picking apart a secondary or something. I have never seen so much perfectly placed poop in my life. It was almost like Rufus took a fire hose and meticulously sprayed poop around the room without hitting any walls or floors.

One of the rugs wasn’t just destroyed; it was practically a biohazard. We didn’t know whether to throw it out or call the Centers for Disease Control. The other rug was semi-destroyed but salvageable, as long as we turned it so the post-cleaning poop stains were moved directly under the sofa. (Which is disgusting, when you think about it.) I found myself admiring his discipline, even as I fought the urge to walk him into traffic or throw him tennis balls for three straight days until he sank to the bottom of the Pacific Ocean. For nearly 36 hours, he waited and waited and waited and waited, his stomach churning, knowing we’d eventually drop our guard and unwittingly enable his poopocalypse.

What does this have to do with tonight’s Giants-Cowboys game? There’s an exceedingly good chance that Jerry Jones, as an NFL owner, has turned into a post-ribs Rufus. Year after year, he ruins at least one rug as Cowboys fans shrug their shoulders and say the football equivalent of things like, “Well, we’re stuck with him, it’s not like we can just drop him off at the pound and start over, right?”

The Cowboys do everything in the flashiest way possible, obscuring their staggering lack of success in recent years. Starting with the 1997 season, they’ve finished exactly .500 (120-120) and won exactly one playoff game, making all the classic mistakes that a recklessly owned sports franchise makes: using deep pockets to assemble a first-rate front office, then ignoring that front office’s input and relying on the whims of their owner; splurging for “name” players, despite a seemingly prohibitive salary cap, and saying they’ll figure it out later (then being unable to do so); and most important, steadfastly believing they have to win the draft, free agency, the state-of-the-art stadium battle and everything else that’s not actually a game or a season.

When a franchise worries about the perception of what it’s doing instead of what it’s actually doing, trouble usually ensues. We just watched this happen to the Red Sox. When a franchise underestimates its fans and assumes they’re not smart enough to value things like patience and planning, and that it needs to keep them interested with splashy moves the same way a parent would hand a screaming kid an ice cream cone, trouble usually ensues. Again, we just watched this happen to the Red Sox. Which makes me think the Cowboys will be our next big-market flame-out. What’s been a safer wager than shorting the Cowboys as a Super Bowl contender these past 15 years, or shorting any of those “Look, everybody, we did something!” teams in general?

Just ask Knicks fans and Redskins fans. When your fans fully expect you to crap on the carpet before it even happens, that’s officially the point of no return. We reached that point with Jerry a few years ago. Maybe he’s a shrewd businessman, but there’s a huge difference between making big-picture business decisions and big-picture football decisions. That’s why Dallas keeps having to throw out those rugs. And that’s why you can’t feel great about Dallas’s 2012 Super Bowl hopes, much less their chances on national television tonight.

On the other side, you have the Giants hosting tonight’s 2012 opener and flying under the radar as always. Saddled with 2012’s toughest schedule and blown off the back pages locally by “TEBOW VS. SANCHEZ!!!!!!!!!!!!,” everything has fallen in place perfectly for the defending champs — few coaches play the “Nobody Believes In Us!” card better than Tom Coughlin. They’ll scrap their way through the next four months, lose a couple of stupid games to inferior teams, pull out a couple of ballsy victories on the road, somehow pull out another 10-win season … and like always, everyone will be terrified to see them lurking in the playoffs as one of the best single-elimination teams of this generation. They’re as predictable as the Cowboys in their own little way. Most football fans don’t even know who owns the Giants, just that they have the last name “Mara,” and that they’re doing a good job. Once upon a time, that was the only thing that mattered.

Anyway, I’m laying 3.5 points with the Giants over Dallas tonight. For the rest of my Week 1 picks and a few 2012 predictions, come back Friday afternoon. Oh, and check out Grantland’s new YouTube channel if you haven’t already.