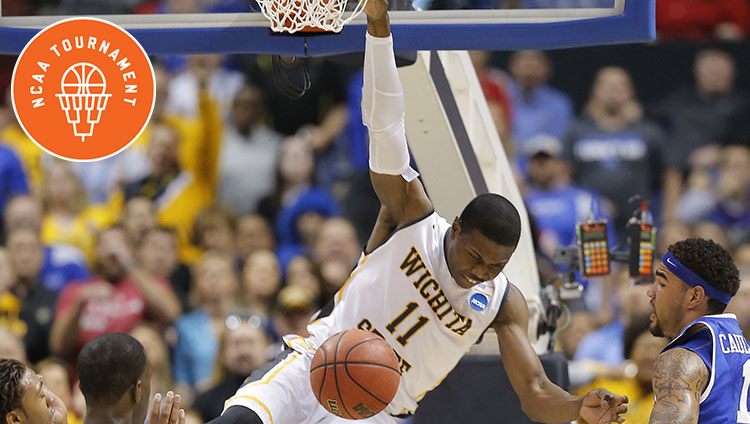 Well, that was pretty awesome, wasn’t it? Let’s run through the weekend and celebrate the Winners and Losers in the insane NCAA tournament action.

Chris Ryan: A couple of weeks ago, Jordan Conn described Cleanthony Early as “all things to all people.” That’s the thing about college ball that all the timeouts and instant replays and sweaty, over-controlling coaches can never kill: the occasional appearance of an honest-to-goodness folk hero, right smack-dab in the middle of a world where such things can barely exist anymore.

That was what I thought about as Early yammed on Willie Cauley-Stein and then channeled 2002 Paul Pierce for a step-back that was, frankly, insulting to everything Julius Randle stands for. I’m not going to pretend like I’ve been poring over Early tape for months, but that’s kind of the point of the tournament. There are these narratives, already in motion, and you are joining them at the height of their arc, as they play out on the biggest stage. Here was a basketball player as a community heartbeat. And this heart sounded like John Bonham drums. Cleanthony Early, the guy who led Wichita State to the Final Four last season, and to an undefeated 2013-14 regular season, may have lost to Kentucky, and his college career may be over, but he went out screaming “I DO THIS!” and making Greg Anthony scream like Ric Flair:

DraftExpress has him going to the Spurs with the 30th pick. To the 29 other teams in the NBA: I dare you.

Andrew Sharp: Nobody in college basketball has been torn apart worse than the Harrison twins this year. It’s not a good idea to spend time on Kentucky message boards — they’re like war: nobody comes back the same — so I can’t speak from experience here, but I have to imagine the name “Harrison” appears in blood red automatically.

In case you don’t know whom we’re talking about, the Harrison twins came out of high school as two of the biggest recruits in the game and key pieces of a Kentucky team that started the year at no. 1 in the country. Then the season began, and on opening night they looked a step slow and completely overmatched. And somehow it got worse from there. 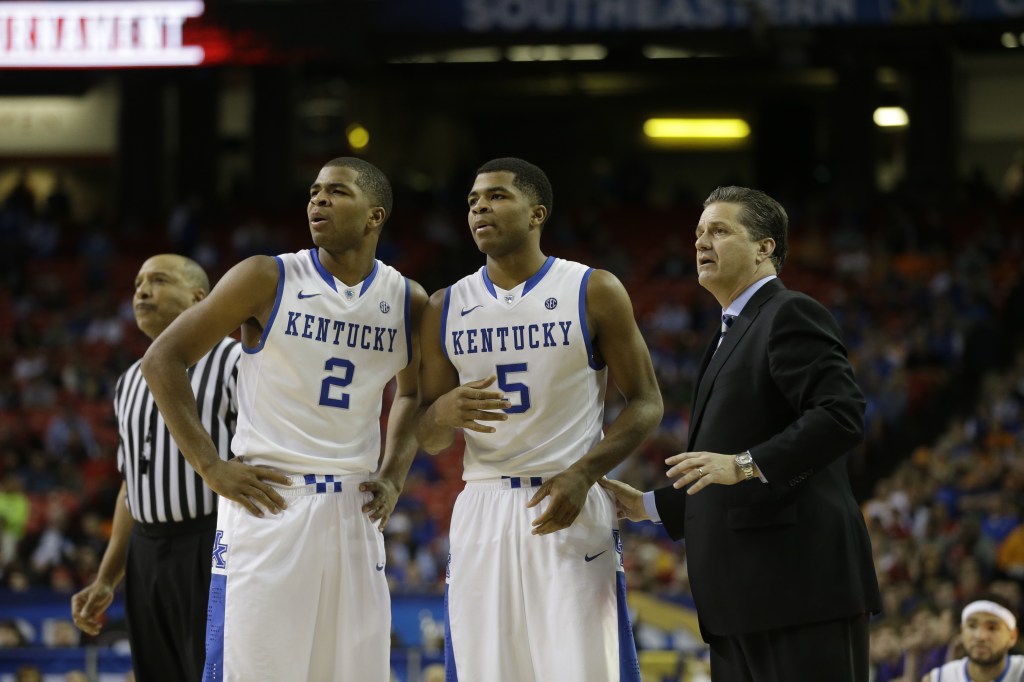 Even more than John Calipari, the Harrison twins were everybody’s overhyped overrated scapegoat for what was happening in Kentucky this season. Nobody who said that was wrong, either. I made this case myself. Kentucky could’ve been much better this year if the Harrisons hadn’t been so bad.

On Sunday, we saw some of the Harrisons from the past four months — some bad turnovers, a few forced jumpers, and at least one moment where I told friends, “The goddamn Harrison twins. Bad things just find a way to happen with them.”

At one point, one of them was open in the corner, Clark Kellogg pointed this out, and I said, “Well, OK, but he’s open because he can’t shoot.”

This is how people have been talking about these guys since November. At best the twins have been met with sarcasm, and more often, it’s just outright scorn.

That’s why Sunday was so cool. A minute after I lectured Clark, Aaron Harrison drained a 3 to give Kentucky a lead. It’s how the whole day went for them, as they silenced thousands of idiotic critics like me.

There was that one lucky 3 that banked in late in the second half, but Aaron also hit a few others from deep to keep Kentucky close all game. Likewise, the UK offense down the stretch basically turned into handing Andrew Harrison the ball and having him barrel to the rim. This led to layups or foul shots, and it won the game for UK, as Harrison went to the line over and over again, and nailed free throw after free throw.

Anyway, it’s hard to call Kentucky a fun underdog, but if you’re looking for a reason to get on board the bandwagon here, maybe the Harrisons fit the bill instead.

On Sunday, they finished with 39 points combined, on 12-22 shooting. And one win over a no. 1 seed in March. And one giant middle finger to everyone who’s been calling them a failure this whole year. Seriously, what’s more fun than that?

Ryan: Did you know Kanye West made Yeezus about Ron Baker? After the game, Andrew Harrison told Baker, “You’re a bad, bad, bad boy.” Andrew Harrison should do player evaluations for Grantland.

Sharp: He had four points in the early minutes of the first half, and then went scoreless for 17 minutes while UConn and Nova limped their way to a 25-24 halftime score. And those first 20 minutes were as brutal as the score sounds.

It was the kind of game that makes you think, “Oh, right, this is why I don’t watch college basketball the first four months of the year.” It was the last game of the night, too. Once Michigan State and Harvard was over, we didn’t even have other games to distract us from the offensive suffering.

Then Shabazz came out for the second half, poured gasoline all over the court, and set Villanova’s whole season on fire.

He had 21 points in the final 20 minutes and turned a miserable slugfest into one long, spectacular knockout punch.

I’m just saying. There were a lot of great players this weekend, but only one of them had me laughing out loud by the time he was done.

Sharp: He was so incredible. There are times when your favorite team loses a game and and then you spend all night upset about it, dissecting what went wrong, what should’ve happened, etc. But as someone who loves UNC, I can promise you, that Iowa State game was not one of these times. There’s not much to second-guess here. 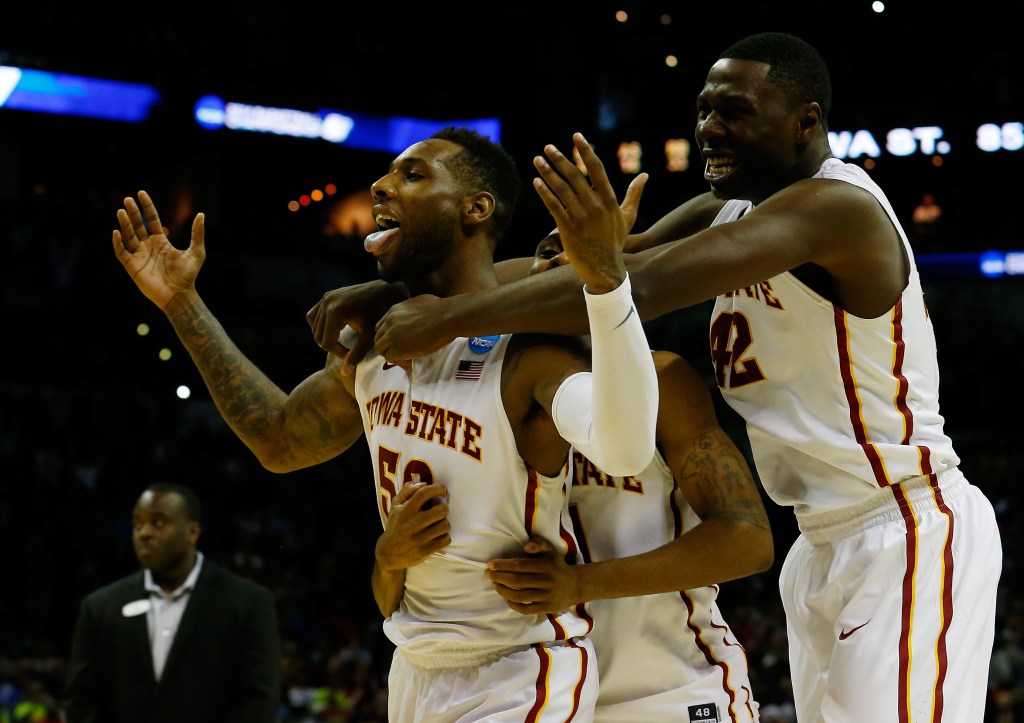 In a game full of momentum swings, the senior point guard came back with huge shots every time Iowa State needed one. So the ending was perfect, when he drove around one Tar Heel and into two others, and muscled in the game winner. He finished with 24 points, 10 rebounds, and seven assists.

It would’ve been nice if Marcus Paige had gotten a look at one game-winning heave instead of Nate Britt dribbling into a timeout, but all that’s irrelevant. Kane and the whole Iowa State team were just a little better. And I’m not even bitter. That’s how ridiculous DeAndre Kane was for that whole game. It would’ve been weird for anyone else to win.

Sharp: There’s a direct link between how much college basketball you watched this weekend and how badly this song/chant/death rattle got stuck in your head.

This is going to be my life for at least the next three weeks.

Rick Barnes' halftime adjustment: 2-3 zone. I can't make this up.

rick barnes has never seen tape on michigan…passive zone, under screens…has he never watched them play?

“What’s that? Michigan is a team that loves to shoot the three, and hits them? Better play zone."

Didn't think it was possible for Rick Barnes to coach any worse, but then he comes out in a zone to start 2nd half when Mich hasn't missed

Rick Barnes tried a two three zone against Michigan. That is all.

I don’t care if the zone actually worked for part of the second half.

Rick Barnes is going to zone is like rearranging deck chairs on the Titanic… to make it sink faster?

I just hope Rick Barnes is coaching at Texas until the end of time. 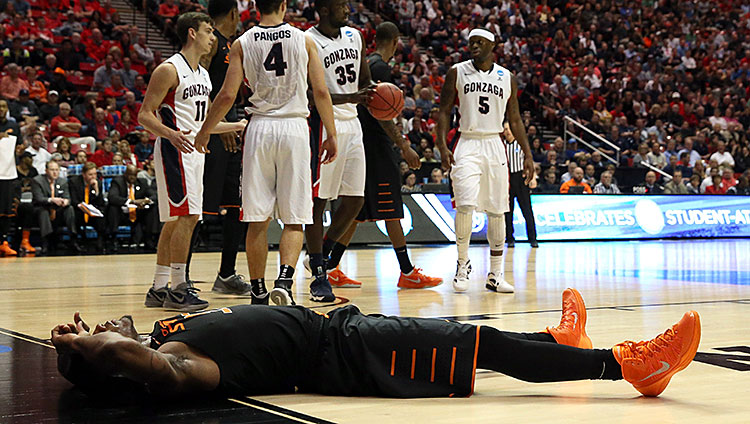 Sharp: Remember when he started this year by dropping 39 points on Memphis? He had 26 in the first half alone that night. Smart would’ve been in good position to win rookie of the year if he’d landed with Orlando as the no. 2 pick last year, but instead he was back in Stillwater in November, and this was actually considered a good thing. It looked like he’d worked on his jumper over the summer and come back ready to destroy college basketball all year long.

That … did not happen.

We could focus on the Gonzaga stats from Friday night (5-14 from the field, 12-19 from the line, 1-5 from three) or the crappy Oklahoma State season in general, but screw it. Let’s all just move on. The year of Marcus Smart has been a nightmare, and the most important thing is that it’s over. Here’s to hoping he can go to the NBA and make all this less depressing.

Sharp: Sports Illustrated … LOOK WHAT YOU DID.

The passage of time

Ryan: The best part about Kentucky and Wichita State, the reason it felt like a modern classic while we were watching it, was because we were watching basketball. Over the last few days, America was introduced to hero coaching. If you thought hero ball was bad, wait until you’ve spent some time watching Bo Ryan put time in a sleeper hold. The only thing worse than hero coaching is hero refereeing. Wisconsin-Oregon had both of these things (also, cool home game for Wisconsin!), and it was barely watchable, despite some flashes of good ball, and a great game from Badgers point guard Traevon Jackson. 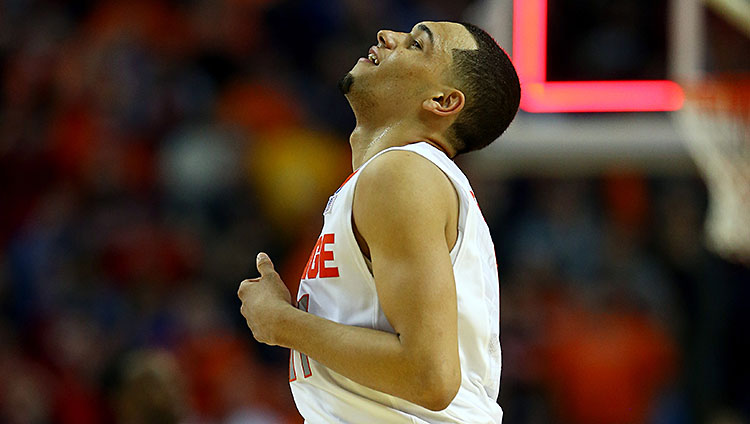 Sharp: For a kid who spent the first few months looking pretty much flawless, the last few weeks have been our reminder that he’s human. Saturday hammered the point home again. He’s still the guy who’s smooth as hell, fearless in crunch time, and perpetually in control of the floor, and whether Ennis goes to the NBA or comes back to ’Cuse, he’s gonna be a lot of fun to watch next year. But he wasn’t this weekend.

Sad, broken souls all over America 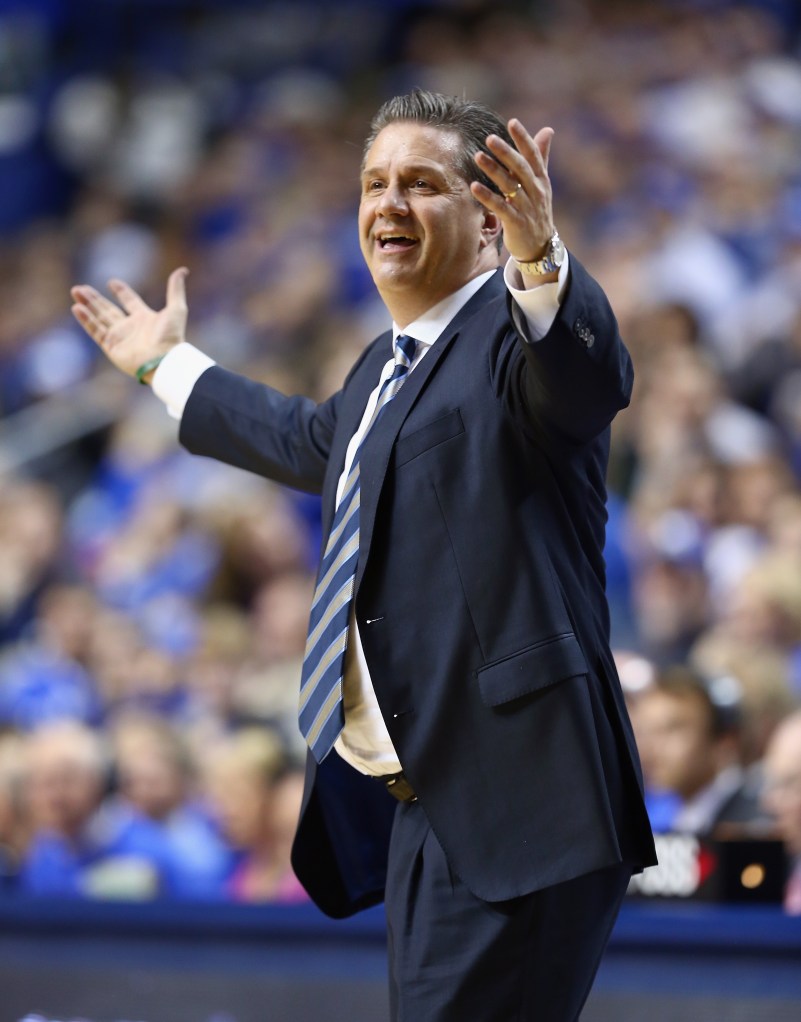 Show Your Neck to Dracula! Barça–Real Madrid Play a Clásico for the Ages