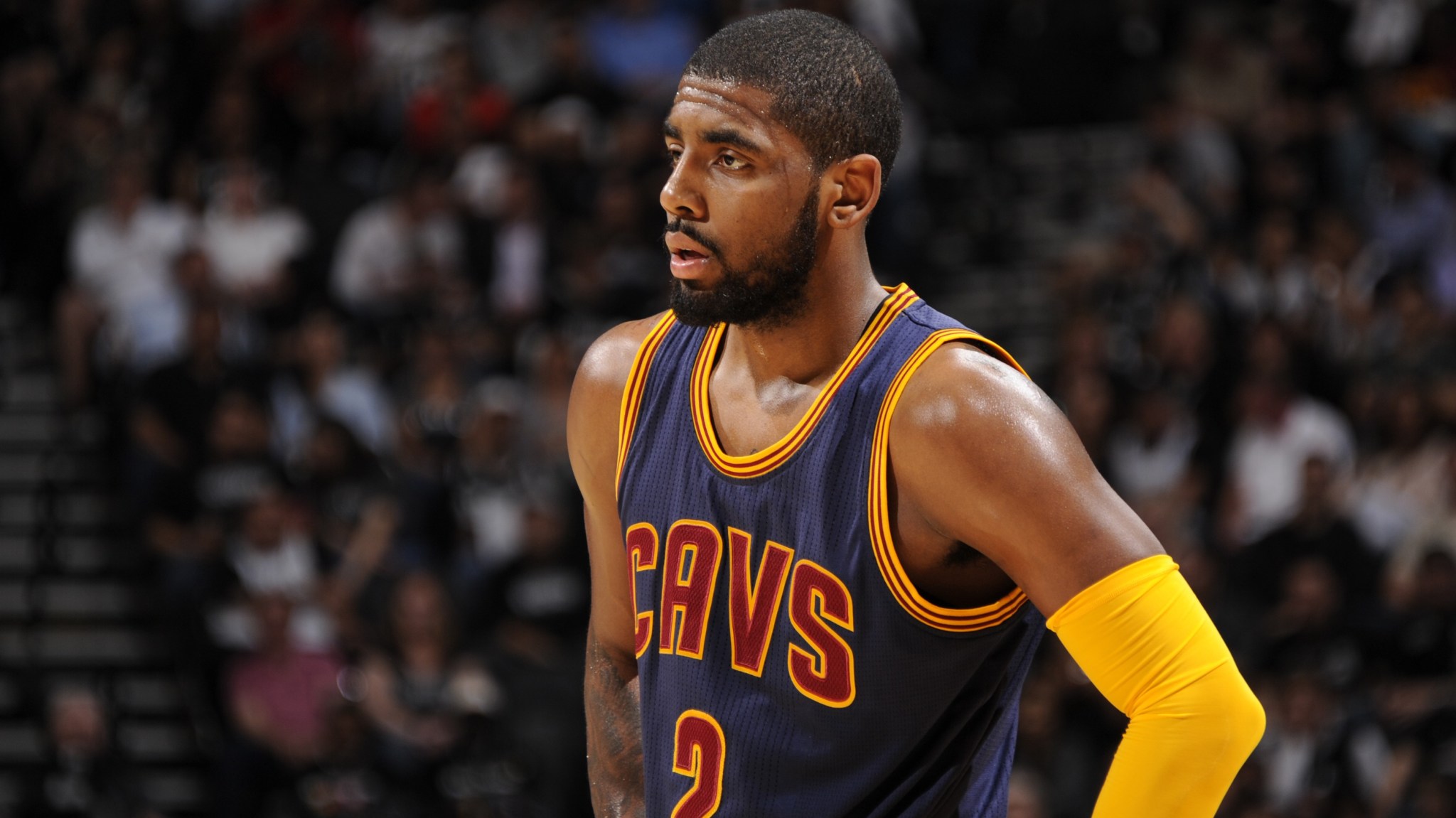 Editor’s note: If you missed my special Trade Value page with every column since 2001, click here. We’ve already done Part 1 and Part 2 of my annual Trade Value column. Part 3 covers the top 10 most untradable players and is scheduled for early next week — but we couldn’t resist running the first piece of Part 3 today after Kyrie Irving’s extraordinary performance in San Antonio last night. So here’s the Kyrie section only. Everything else is coming next week. (Translation: I’m not done yet.)

GROUP C: “NO OFFENSE, BUT I’M HANGING UP”
(CONTINUED FROM PART 2)

10. Kyrie Irving
For Grantland’s Trade Value TV special that ran on ESPN on February 8, I ranked Kyrie 26th overall and sent Cleveland fans into a rancorous frenzy. You would have thought I mistakenly said the Rock and Roll Hall of Fame was in Cincinnati or something. You couldn’t blame them for being salty. They had just watched the semi-floundering Cavs play .500 ball through the first 40 games as they inadvertently filmed their own 30 for 30 documentary. What if I told you that you could go home again … and that maybe you wouldn’t want to? Their chemistry looked almost as shaky as the Real World: Skeletons cast. LeBron didn’t look quite like LeBron. Kevin Love had the permanent “Mike Myers standing next to an unraveling Kanye” face going. And David Blatt looked like he was headed for a 20-year coaching career in the Patriot League or the NESCAC.

In January, everything started to flip: Cleveland made two shake-it-up trades, came together defensively and ripped off a 12-game winning streak that included Kyrie’s 55-point game against Portland. Cavs fans started feeling themselves a little. Kyrie … 26th??? He’s only 22! If he played for Boston, you’d have him ranked in the top 10!!!! CHOKE ON YOUR OWN #%@%@, YOU #&#$%!%!%!

My defense: I didn’t feel right about rewarding a shooting guard trapped in a point guard’s body, someone ill equipped to execute the traditional “make teammates better and take over when it matters” recipe. I call those players “0-guards.” In some cases (a.k.a. Russell Westbrook), they’re so good that it doesn’t matter. In other cases (Tyreke Evans, Steve Francis), it does matter. Kyrie’s five-year, $90 million extension wasn’t helping his cause, nor was the fact that his NBA teams had never succeeded for even four straight weeks. And also, I freaking hate Cleveland. I really do. (Just kidding.)1

But I couldn’t shake the fear that I had screwed up. I spent the next two weeks watching Cleveland more closely, ultimately bumping Kyrie’s ranking before Part 2 of the written column was posted on February 25. LeBron’s miraculous return to form (thanks to two weeks of R&R in Miami)2 had overshadowed a more compelling subplot: Finally, we saw all the ways Kyrie could affect a winning team. Ridiculous first step. Excellent shooting. Semi-freakociousness on fast breaks. A world-class ability to finish in traffic from any and every angle. It’s all there. When you project him as a Wealthy Man’s Tony Parker, Kyrie’s basketball ceiling makes more sense: He’s a ridiculously efficient scorer who needs another creator (or a fluidly brilliant offensive system) to get everyone else involved.

Could LeBron be that creator for him? No question. It’s already happening. Even if Kyrie will never have the Conley Clock in his head (see Part 2), it doesn’t matter if he’s playing with the right guys. I was dead wrong about Kyrie’s potential. But hey — at least I got to the right place with it. Just took awhile.

Which brings me to Tangent No. 1 …

When Jalen Rose and I taped The Grantland Basketball Hour with Kobe last month, we were killing time during one of the commercial breaks and I asked Kobe if he had any “new” favorite players. You know how great chefs always identify the other up-and-coming great chefs? Kobe fancies himself as that guy for the NBA alpha dog/badass/overcompetitive mf’er corner. Knows it when he sees it. Even brags about being able to see it. He sniffed it out early with Westbrook (his favorite current star) in 2012 and — to my surprise — he’s sniffing it with Kyrie now and said as much. He loves Kyrie. So that was a game changer for me. When Chef Kobe blessed Chef Kyrie, I knew it was time to wipe my Kyrie Opinion Hard Drive and start over.

You know who loved hearing Kobe praise Kyrie? Jalen. We had been arguing about Kyrie’s potential for months. Now Jalen was smiling like someone had just served him a 7-pound lobster. And he added a crucial point: Jalen loved the fact that, even after LeBron had arrived, Kyrie never changed how he played and who he was. Didn’t kowtow to LeBron. Didn’t start doing an awkward John Stockton impersonation. Just kept attacking and getting buckets. For Jalen, that mattered. That told him, unequivocally, that Kyrie was here to stay.

Which brings me to Tangent No. 2 …

One of the coolest things about my job as it has evolved these past few years: getting access to so many memorable basketball players and basketball minds. Bill Walton and Larry Bird changed my too-harsh opinion of Kobe’s style; shit, the epilogue of my NBA book told the story about Walton and I arguing about “The Secret” or “The Choice.” I spent a year watching basketball games in a tiny conference room with Magic, and then a second year with Doug Collins. I talked shop with Kobe, off the record, a number of times. I spent a whole day with the great Bill Russell. I got to know Steve Nash and Steve Kerr. I spent multiple days with Charles Barkley. I spent three hours with Durant and Harden once. I’ve picked the brains of dozens of famous NBA people on my podcast. I’ve spent the past three years talking for hundreds and hundreds of hours with Jalen. I spent an afternoon in Vegas with Isiah Thomas that became the second chapter of my book. And I’ve talked basketball with dozens of ex-players and ex-coaches who passed through the league — everyone from Kiki Vandeweghe to Danny Ainge to Doc Rivers to Elgin Baylor to Jeff Van Gundy to Hubie Brown.

Once you learn how to discount personal agendas (they are endless), personal relationships (there are many), and just plain stubbornness (like Barkley’s recent ill-advised on-air rant about advanced metrics), fundamentally, you realize that those old-school lifers see things that you and I can’t see. Hoop junkies bang out League Pass games, study those advanced metrics, read as much as possible, do everything we can to catch up. And many times, it works — like when we thought Memphis might be better off without Rudy Gay while the old-school guys were astonished that Rudy got traded. So that’s our trump card: just outworking the old-school lifers and learning as much as possible.

Their trump card: They can play or coach against someone like Westbrook or Kyrie — even if it’s one time — and pick out something in his DNA that we could never pick out. And again, you need to sift through the noise/agendas/biases/stubbornness to get there. That community doesn’t trust advanced numbers; they don’t care about PER, SportVU, shot charts or real plus-minus. And as the TNT guys recently showed after Kyle Korver made the All-Star team, it’s unclear whether many of them are willing to accept where basketball is going as a sport (pace and space, baby). That community wants basketball to be more black-and-white. It’s just more familiar for them. It’s what they grew up with.

Are you talented? Are you competitive? Would you have won my respect on a basketball court? Can you put up numbers? Can you do anything that I couldn’t do? Could I have won a ring with you? Could I have gone to war with you?

For them, it’s about heading into basketball battle. That’s also why someone like Blake Griffin drives the old-school dudes crazy. He bitches at referees too much, bitches about getting hit too much, forgets to rebound, misses too many free throws and cares a little too much about making an impact off the court. They don’t totally know if they’d want to go into basketball battle with him. They can’t tell. Westbrook is the flip side — they’d put up with his erratic shot selection because he’s a warrior and a crazy competitor and a force of nature and everything else those guys love.

And over the years, I have learned HOW to listen to that community. Just put it through its own little filter. For instance, Jalen enjoys Jamal Crawford’s work for a variety of reasons, but mainly for those three times a month when Crawford activates heat-check mode and starts draining shots that nobody else in the NBA can make. The potential of that happening is why Jalen respects Crawford so much. He’s willing to jettison every negative in the Jamal package (poor defense, no rebounding, the occasional 5-for-18 stinker) and drifts toward those heat-check games and Crawford’s unwavering confidence. And why? He understands the degree of difficulty in what Crawford does. Just like I understand the degree of difficulty in, say, someone writing an especially good deadline column. So we agree to respectfully disagree on Crawford; even if Jalen overrates his impact (in my opinion, anyway), I understand why.

At the same time, Jalen has raved about Kyrie’s ceiling for three years and learned to discount MY unenthusiastic opinion; Jalen knew that I wasn’t totally seeing what he saw. I wanted Kyrie to be something that he could never be: basically, late-’80s Isiah or Right Now Chris Paul, the point guard who spends 42 minutes making everyone better before taking over in the final six minutes. Jalen maintained that Kyrie wasn’t that guy. I maintained that, until anyone proved they could win with him, I was out on him. We were in no-man’s-land.

And then … the Cavs started winning … and Chef Kobe blessed Chef Kyrie’s overcompetitiveness/alpha/badass side … and I happily waved the white flag. There IS something special here, as we witnessed during his epic destruction of San Antonio last night. I always thought Kevin Johnson had the best first step of any point guard I’d ever seen; he had a downhill dribble, if that makes sense. Opponents were petrified of him. They would start backpedaling even before he made a move. That’s how the poor Spurs looked last night. They were just moving backward, almost like a defensive line getting pounded. Throw in his crazy finishes and his Curry-like 3s, and … I mean, JESUS. Has anyone ever eviscerated the Duncan-Pop Spurs quite like that? He threw up 57 and it felt like 75.

If Kyrie keeps blossoming over these next two months, then it will start to feel like Miami in 2005 — Shaq’s first year, when Dwyane Wade made a massive in-season leap and suddenly they looked like Kobe-and-Shaq reincarnated. The biggest difference: 2015 LeBron is better than 2005 Shaq. The second-biggest difference: Kyrie is two months younger than Wade was in 2005. Sticking him 10th might not be high enough. Regardless, I’m glad I came around on Kyrie. Better late than never.