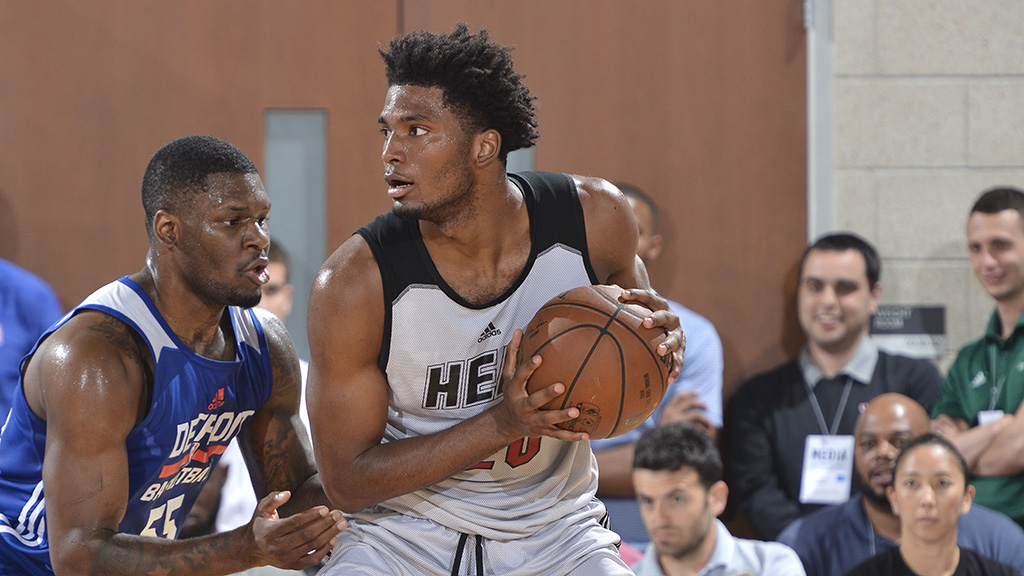 The Shootaround crew is in Vegas for NBA summer league, hoping to catch a rising star. Here are some thoughts through Monday’s action.

Wouldn’t that be nice? If Las Vegas summer league were a total service to the fans, there would be no playbook, no quirky experiments just for the sake of experimentation. Games would be props putting star draft picks on pedestals. We’d be able to see these talented and promising athletes not in a vacuum but in a crystal ball, showing the kind of domineering star power that potentially lies in their future.

Early in the first quarter in his Vegas debut against the Denver Nuggets, Justise Winslow drilled a picture-perfect 3-pointer from the right wing. It was a promising start to the game. After curiously sitting out the Miami Heat’s first LVSL game against the Utah Jazz a few days earlier, it appeared as though we were in for an awesome night of Justise. It’d be the only shot he’d attempt all game.

He finished the game playing 12 minutes — less than five minutes in the first half, and about seven in the second half, including the final two minutes. He spent most of his night at the coaches’ end of the bench, sitting next to coaches Dan Craig, Juwan Howard, and Chris Quinn. In the first half he had something that looked like a car mat pressed on his knee. He was stretched out by a trainer all through halftime. There were no injuries to report — the relief of which was canceled out by the disappointment of his inactivity.

When he did play, Winslow was deferential by design. In the Orlando summer league, Winslow was a charging bull, essentially playing de facto point guard at times. His backcourt mate Shabazz Napier played only one game in Orlando. Last night was Napier’s showcase. It became apparent very early on that last night was meant to be an education. Winslow sat and looked over at his coaches scrawling out plays. Putting up gaudy, empty stats is nice, but Winslow is an important piece of the present and future. If absorbing the system comes at the expense of summer league stardom, then so be it.

Winslow checked back into a close game with 2:18 remaining — a late-game simulation. He was assigned Emmanuel Mudiay, whose John Wall–esque vision and control have been some of the most riveting things to watch in the first four days. With 12.4 seconds remaining, Winslow hounded Mudiay at the top of the left wing, forced him left into a secondary defender. Winslow, a power wing, is no taller than Mudiay, but excellent lateral quickness paired with ridiculous upper body strength means he’ll be able to take any number of different crunch-time assignments. With one last opportunity to tie with only seconds left in the game, Winslow didn’t get a play drawn up for him. He was the inbounder. He threw a lob on the inbounds pass. It failed and they lost. You could ask for more — of the team, of Winslow, of the weird, nihilistic ecosystem that is summer league — but that would be missing the point. 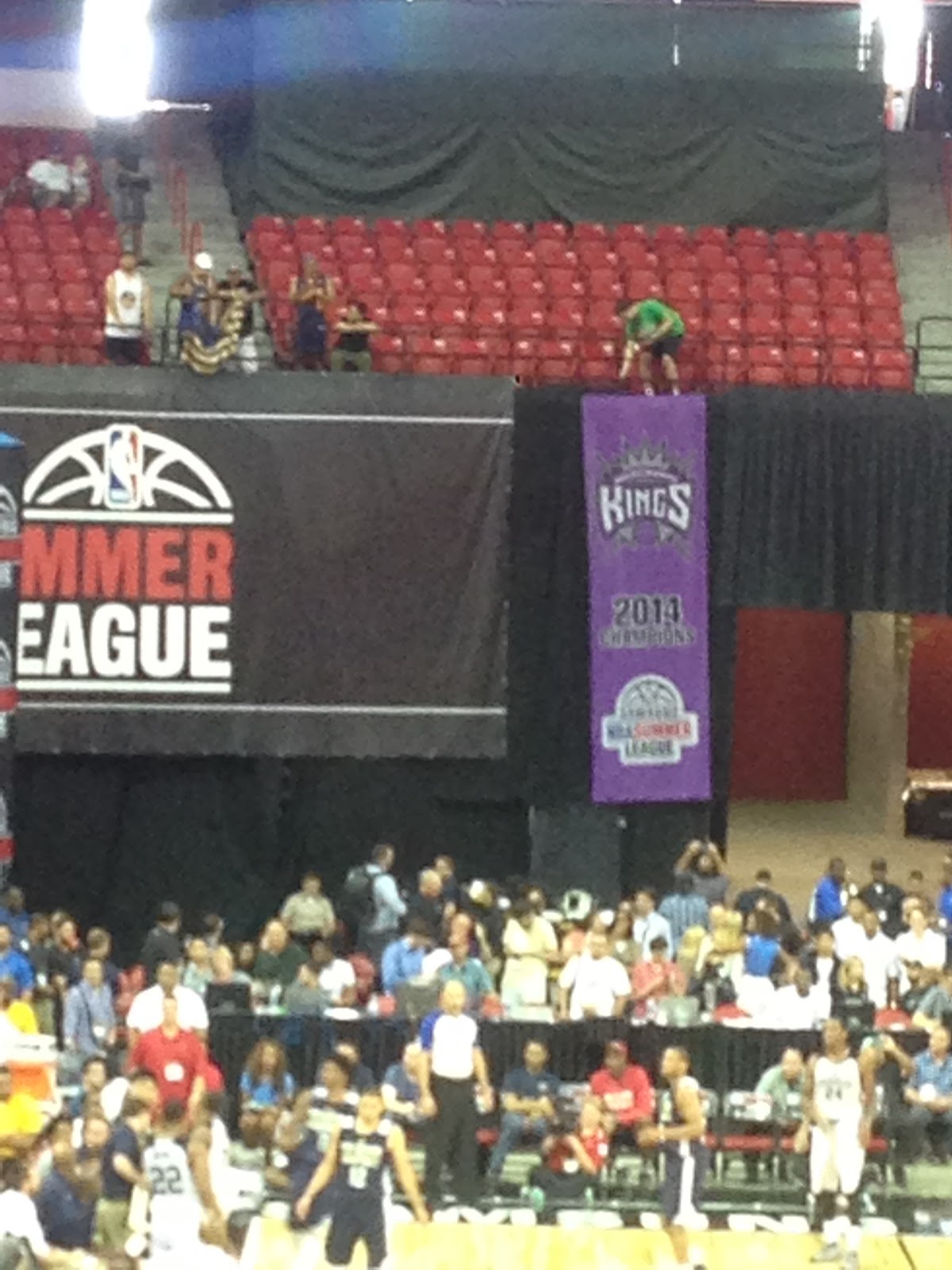 The banner, hanging from the handrail of the middle bowl, unfurled rather meekly considering what it signified. It read: “Kings 2014 Champions Samsung NBA Summer League.” As if anyone needed to be reminded. In other words, Monday’s meeting between the Warriors and the Kings was not just your normal semi-coherent summer league contest; it was a clash of champions.

The Kings, of course, have had a rough go of things of late. Their coach may or may not have tried to shop their star player. Their star player is 100 percent emoji difficult to get along with. Their vice-president of franchise and basketball operations (whatever that means) is possibly at odds with their coach over the status of the star and also may not know what the hell he’s doing. And their owner seems like a character straight out of HBO’s Silicon Valley and appears to have the attention span of a fruit fly on cocaine coupled with a stoner’s lack of impulse control. 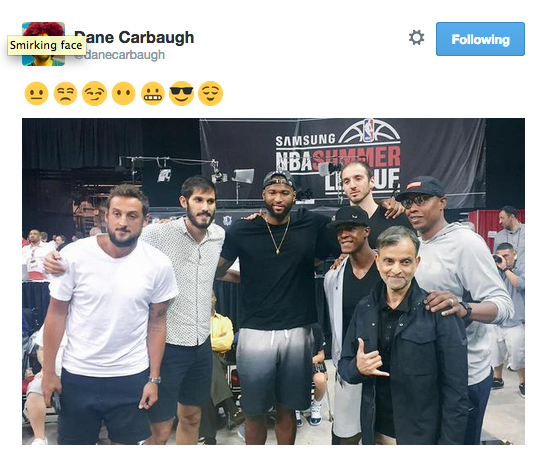 You know a team is really in a state of disarray when its incoming rookie lottery pick feels the need to warn his new team that unless they “come together as brothers,” they’ll “look like trash.” THE KINGS’ VOICE OF REASON IS THEIR ROOKIE. How can you not love this guy?

Willie Cauley-Stein is a 7-foot coiled spring of a basketball player. He doesn’t so much cover ground as envelop it. His offensive game may be sushi raw but all of that wiry athleticism, combined with crackerjack defensive instincts, means Cauley-Stein has all the makings of a natural-born destroyer of the opposition’s feelings.

In the clash of champions, Trill showed that he has that thing that every great defender needs: He hates to watch the other team eat. He had 13 points, eight rebounds, and five blocks. One of those blocks came about two minutes into the second half after he threw a bad pass behind Summer Kings guard David Stockton. The Warriors’ Dominique Sutton corralled the ball and broke toward the basket. Instead of giving up on the play, Trill glided into position like a lion stalking prey, measuring Sutton all the way. When Sutton attempted to lay it up, Cauley-Stein almost contemptuously batted the ball into the second row.