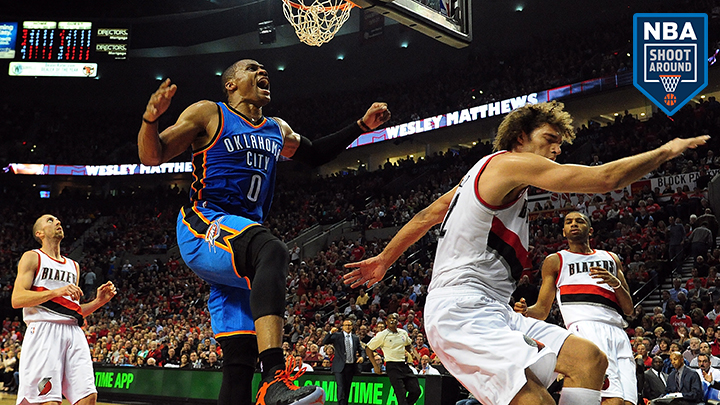 The Age of Westbrook

Jason Gallagher: Until about 12 hours ago, it was just a thought — one that only the bravest among us could contemplate out loud. Sure, we had talked around the idea, maybe with neighbors, maybe with friends. But it’s not like it would ever really happen, right? What would happen if we answered the question?

What would happen if Russell Westbrook were let loose?

THIS IS THE AGE OF WESTBROOK AND IT’S EXACTLY WHAT WE ALL DREAMED IT WOULD BE.

Westbrook, for the first time, is without strings. He devoured the Blazers, with 38 points on 11-26 shooting and six assists, even though Portland’s defense knew he was the only viable offensive option the injury-depleted Thunder had. On the other end, Damian Lillard didn’t get a shot to fall until the third quarter due to Russ’s harassing defense. Westbrook thrives on the freedom that would otherwise crush other point guards.

Even though this great Portland team ultimately defeated Oklahoma City, it became very clear that the Thunder will survive the Age of Westbrook (he could really use some help, though). The question is, will we?

Do You Believe in Russ, Taylor? 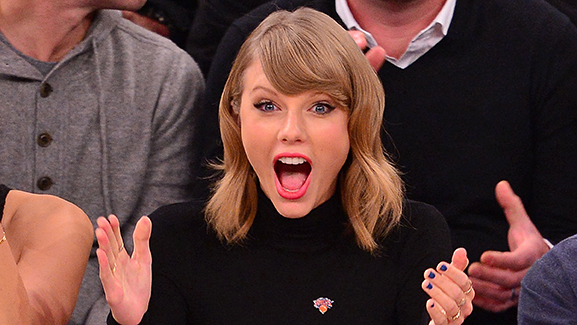 Kirk Goldsberry: Let’s not shovel dirt on the Miami Heat just yet. Remember the last year Chris Bosh played without LeBron James? He averaged 24 and 11. Well, he had 26 and 15 last night, and led the Heat to a victory over the upstart Wizards. 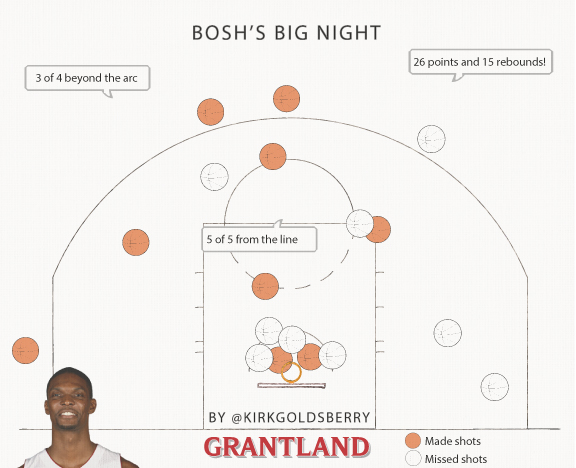 Oh, and James Ennis did this to Rasual Butler …

In addition, Dwyane Wade and Norris Cole each scored over 20 points. The Heat won’t be title contenders this year, but if they get this kind of production from Bosh and Wade, they could still be one of the better teams within the putrid Eastern Conference.

What Could Have Been 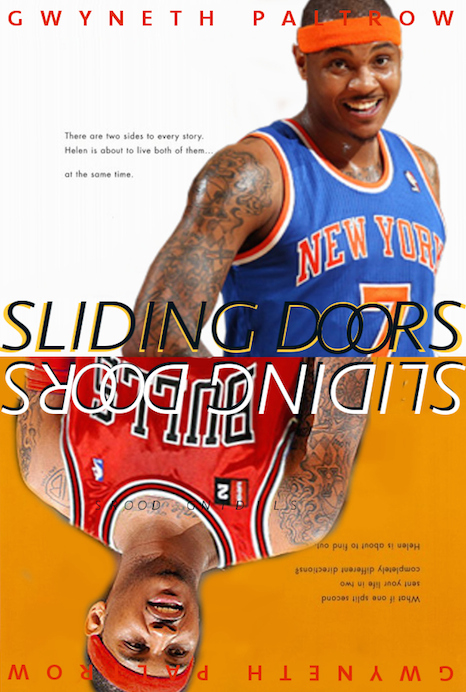 Jason Concepcion: Even though the famed Blue Man Group were on hand to lend their signature azure-slathered avant-hippie drumming to the proceedings; even though the reflected light from the Jumbotron screens showing the slickly produced hype video of Carmelo Anthony jogging in majestic slow motion through the mottled gray Manhattan streets lit up the iconic spoked ceiling of Madison Square Garden; even though the gathered throng of nattily clad bankers and replica-jersey-bedecked diehards and foam-pointy-finger-wearing children and stylish downtown hipsters and perplexed tourists from all corners of the globe filled the seats of the World’s Most Famous Arena; it didn’t really feel like a Knicks home game until the Garden Vision screen showed Taylor Swift and John McEnroe flashing thumbs-up and peace signs, respectively, from their courtside perches, framed by the glowing red numbers of the scoreboard showing a double-digit Knicks deficit to the Bulls. Then it felt like home.

Remember the 1998 timestream multiverse/rom-com mashup Sliding Doors? It starred the exquisitely curated English accent of Gwyneth Paltrow, as a woman whose life arc forks into two distinct paths — one ending in sadness and death, the other glimmering with the hope of true love — after she just misses (or in the alternate timeline makes) her train. That was Carmelo Anthony’s opening night.

In the one timeline, he takes less money and fewer years in Chicago. He partners with Derrick Rose and Taj Gibson (assuming a no-sign-and-trade scenario) under the auspices of crackerjack coach Tom Thibodeau. He contends for the Eastern Conference championship for the next several years.

In the other, Melo takes New York’s five-year, cat’s-whisker-less-than-max-money deal. He puts his trust in rookie exec Phil Jackson and rookie coach Derek Fisher’s ability to change the culture and install a complicated offensive system with a hodgepodge of players — many of whom won’t be around to watch said culture and system take root. He scuffles out 2014-15 with only the barest glimmers of the seventh or eighth seed twinkling in the distance.

Opening-night score: Bulls 104, Knicks 80. Rose isn’t quite up to speed and yet he can still make the breath catch in your chest. Thibodeau got a tech arguing a call, his team up 24. There’s never anything wrong with taking the money you’re worth. I just hope Melo doesn’t end up regretting it.

What About Mirotic and McBuckets, Tay? 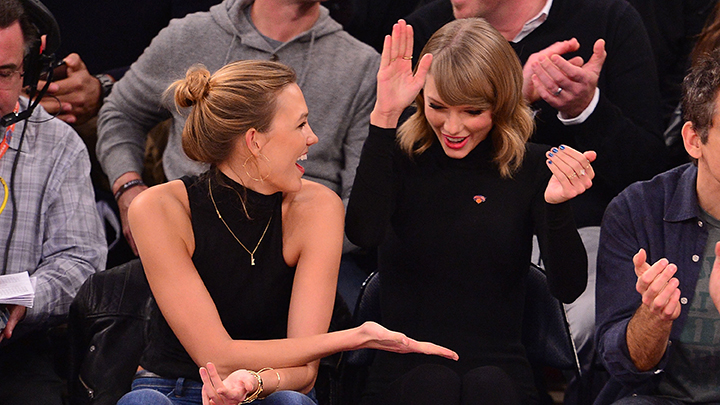 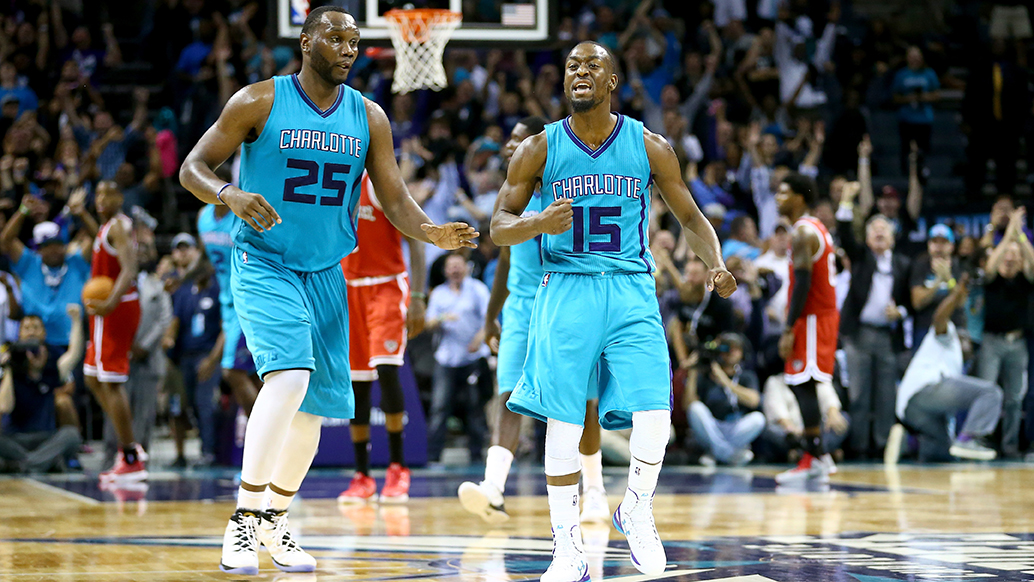 Streeter Lecka/Getty Images
Andrew Sharp: Does anyone not love Kemba Walker? Even going back to UConn, it was impossible to root against him. Remember the Big East tournament? Remember when he just won the NCAA title by himself? He’s the best kind of athlete. Not the most talented, not dominating anyone physically, but with Bill Raftery ONIONS the size of Jupiter.

Before that shot tied it, things hadn’t been going great for the opening-night Hornets. They had the new court, they had the new Lance, they even had Michael Kidd-Gilchrist’s new jumper, and none of it mattered. Brandon Knight was ruining everything.

He had 22 points (on 5-17 shooting, but still) to go with 13 assists and eight rebounds, O.J. Mayo and Giannis were holding down the second unit, Larry Sanders was showing signs of life, and they were all killing the Hornets. Then the tide started to turn, possibly when Lance Stephenson climbed Larry Sanders’s face at the end of the third quarter. That was part of a 24-point second-half comeback that ended with Kemba sending things to OT, and then in OT … of course. Kemba. Onions.

There was a lot to be excited about for both teams last night. The Bucks are going to be scaring teams like this all year, and they may not win, but they’ll make basketball more fun in Milwaukee than it has been in a long time. And the Hornets?

Kemba signed a four-year, $48 million deal this week, and I knew right then that this team was officially destined for big things. Because that awkward free-agency question won’t hang over the season, because that’s actually the perfect deal for someone who’s not quite an All-Star but still awesome enough to matter in the playoffs, and because now the path is clear for Lance Stephenson and Kemba Walker to carry the torch for New York City basketball every goddamn night.

Google still can’t figure out if the Hornets are real again, but that’s all right. Soon everyone will know. Professor Al is back, Kidd-Gilchrist shot 75 percent from the field last night, Lance and Kemba will be a case study in “no no no YES!” all year long, and this is all going to get fun. The hype is as real as the honeycomb court. MJ knows. 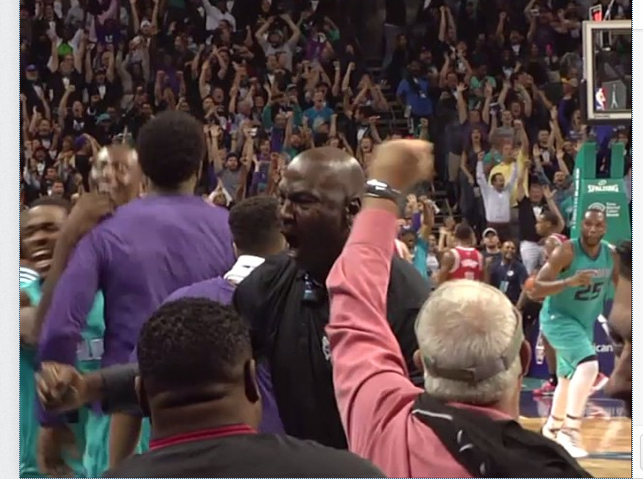 That’s how all Hornets fans are feeling right now. That’s how any NBA fan felt watching the end last night. That’s what Kemba does to people.

Any Big East Tournament Memories You Want to Share, T-Swizz?? 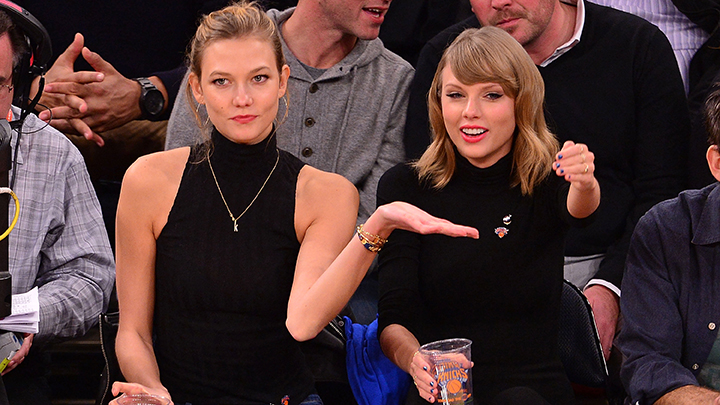 Oh Man, This Is Just the Beginning

It's that time of year again. lol I DO NOT PLAY BASKETBALL. I DO NOT HAVE A UNIBROW.

No Place in Philly 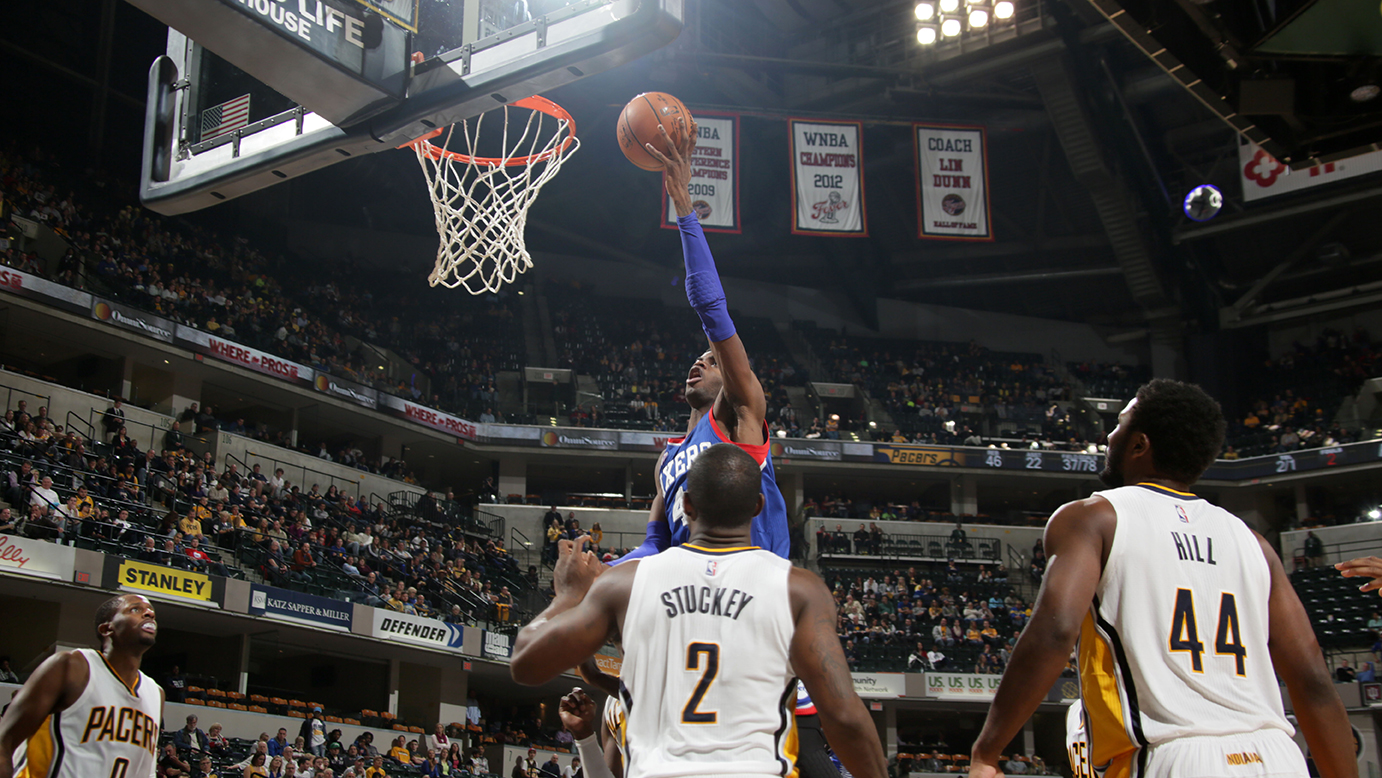 Danny Chau: Basketball is basketball, so it wasn’t a shock when the Sixers hung in for three quarters against a severely undermanned Pacers team. It wasn’t a shock when the Sixers forced eight turnovers in the first quarter. After all, Indiana had a bottom-seven turnover ratio last season, and that was back when it actually had offensively gifted players in the backcourt and didn’t have to run its offense through Luis Scola. The Sixers are a team with a bunch of athletic and rangy players, none of whom is under 6-foot-5. By simply covering more of the floor with their collective mass, they will force mistakes. But basketball is basketball, and so there is a tacit expectation that things regress to the mean. The Pacers protected the ball better in the final three quarters; the Sixers lost by 12.

That’s not a good pitch. Here’s a better one: Want a reason to watch the Sixers? Treat them as a social experiment on the scale of Fox’s Utopia. No? OK, do you like point guards who toe the line separating brilliance and utter collapse? Do you like ’em tall? Prefer the creative types? The Sixers have three of those, two in commission. Tony Wroten (22 points, eight rebounds, seven assists) is incapable of making a play that isn’t spectacularly good or bad. Timberwolf-in-exile Alexey Shved (18 points, five assists, zero turnovers) was a wonder on offense last night; he also had a game-low plus/minus of minus-16. Sometimes they play together. Sometimes they make magic like this:

For more than two hours, I was glued to Sixers-Pacers by choice. Maybe that’s masochism to you.1 I watch terrible games for the same reason that some folks choose to enter sensory deprivation tanks: I seek understanding, a new perspective. But once you enter the void, you don’t just go back to how things were. You can’t. One important distinction? You are static in your own weightlessness in a sensory deprivation tank. The Sixers tank is in perpetual motion.

I used to think a utopian basketball team was something close to what Mike D’Antoni pulled off in Phoenix, or what George Karl was able to conjure with the post-Melo Nuggets. But, as you learned in ninth-grade English class, utopia literally means “no place.” The platform the Sixers have created — giving fringe players the freedom to explore, freedom to fail, freedom from external expectation, one way or the other — there really is no place like it in the NBA. 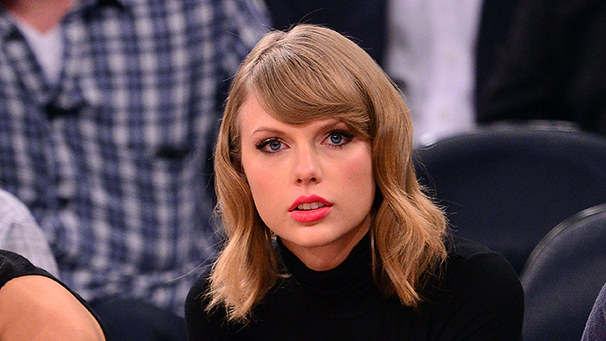