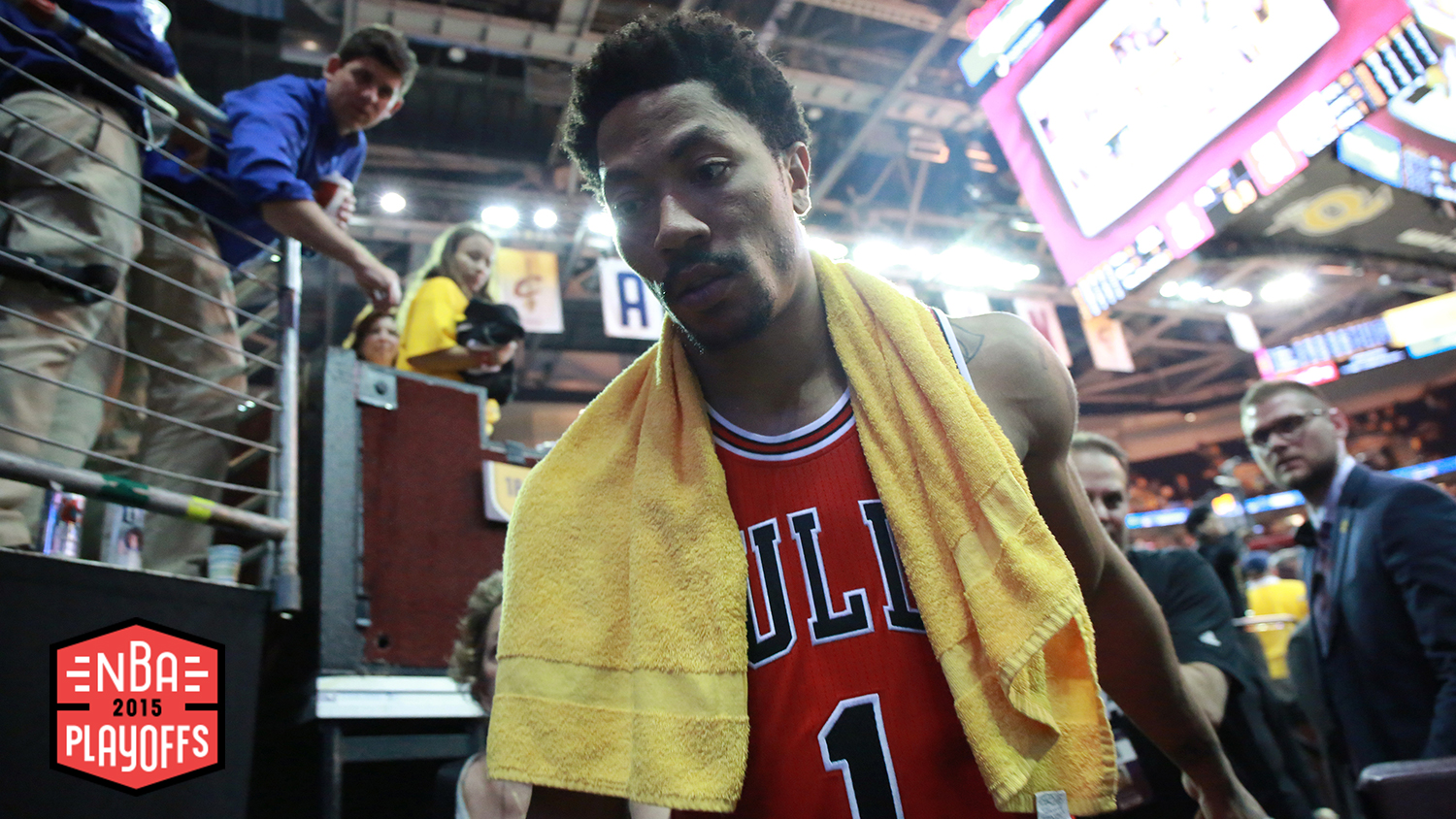 May 5, 2015
by Jason Concepcion, Kirk Goldsberry and Chris Ryan

He Knows How to Make an Entrance 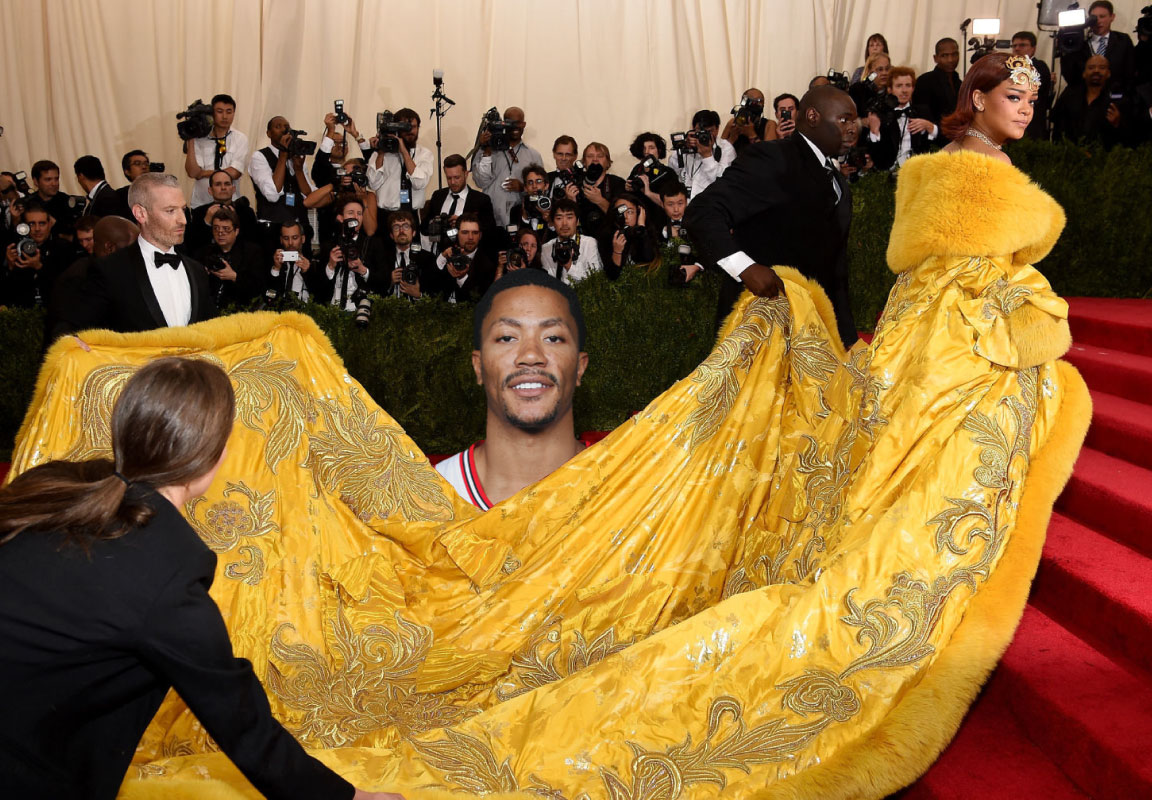 Kirk Goldsberry: Did you see Rihanna in that showstopping yellow Guo Pei gown at the Met Gala last night? Well, it looked like a peasant’s smock compared with the haute couture Derrick Rose dumped all over Cuyahoga County. Rose scored 25, stirred a stiff pick-and-roll drink, and saved his best for crunch time as the Bulls took Game 1 on the road.

Not only did he help spur a huge 15-0 run in the third quarter, but when the game got tight in the fourth, Rose also took matters into his own hands with an MVP-vintage trio of sequences, beginning with about 4:30 remaining and his team clinging to a fragile three-point lead.

Trip 1: How does a human even make this pass?

The next two trips featured the suddenly unstoppable two-man game of Rose and Pau Gasol.

Trip 2: Rose used a throwback burst of speed to split the defenders and nail his patented floater, only to be called for a bogus charge. Note, it’s a bogus charge because LeBron clearly took a little hop after Rose left his feet.

Trip 3: Rose again used the Gasol screen to attack the paint, this time throwing another impossible pass back to Gasol, who knocked down a wide-open jumper. Pau hit six jumpers from above the free throw line, and Rose wreaked havoc in the paint all night.

David Blatt’s gonna earn his money if he can figure out a way to stop that pick-and-roll pairing. Good luck with that, Blatt.

When the Old Style Hits, and You’re Listening to the “Werewolves of London” Guitar Solo

Chris Ryan: Behold the four corners defense, as pioneered by the garbage-time Houston Rockets. I would say that Kevin McHale’s players were sanitation workers last night, but I have too much respect for sanitation workers — they work way harder than the Rockets did. Above, you will see James Harden watching noted whirling dervish J.J. Redick fly through the lane for a mildly contested, over-the-shoulder floater. This took place late in last night’s Game 1. I don’t really subscribe to the Charles Oakley school of All Men (Who Go for a Postseason Layup) Must Die, but at least make an effort, you know? It’s not like Houston wasn’t well rested. If L.A. had come into the building and more or less punted on Game 1, giving starters like Blake Griffin ample time on the bench next to the injured Chris Paul, I don’t think many people could blame them. Instead, Griffin put up a triple-double, played point forward, and led his team to a huge win. Los Angeles looked like a team that had just beaten the defending NBA champions. The Rockets looked like a bunch of guys who had spent the last week high-fiving each other for crushing Charlie Villanueva in five games.

Last night, Houston was front-running, looking for easy outs, and got stomped in its own gym. Is that assessment a little unfair? Yes. Is my perspective on this game somewhat influenced by the 47 combined turnovers and witnessing 20 DeAndre Jordan and Dwight Howard free throw attempts?

It has taken 11 minutes to play 26 seconds. This is not basketball.

Yes. And someone else agrees with me.

Jason Concepcion: Austin Rivers is a basketball player who plays in the NBA, for a team coached by his father. The team has championship aspirations, and is located in the second-largest media market in the country. Austin Rivers’s teammates include some of the most famous athletes in professional sports. They do nationally televised commercials. Austin Rivers is not a particularly good basketball player. We all know that, but the particular context of his badness stacks the deck of misery unfairly against him. Austin will never get to be anonymously bad. Not now.

To be fair, he’s not nearly as bad as he’s made out to be. That said, Rivers spent much if not all of Game 1 against the Rockets playing like germophobe-era Howard Hughes trying to get out of a gas station bathroom. It feels weird to talk about Rivers like this, after he scored 17 points, shooting 4-of-6 from 3, and in the wake of a Clippers win over a shockingly uninterested Rockets team. But there is one moment of his game that truly distinguished itself in its level of shookness.

The warning signs were there early, I guess. Little things, like Blake Griffin pointedly running the break himself several times with Austin on the court. Then this:

There’s Austin, driving top speed, at an elderly Jason Terry, dribbling behind his back and falling down, as his lower body violently rebels at the level of coordination being asked of it, and the ball skitters away. He gamely tries to swipe at it, like a man whose hat has just blown off and is now tumbling down the street to a life free from tyranny. This play made me sad deep inside of my chest. 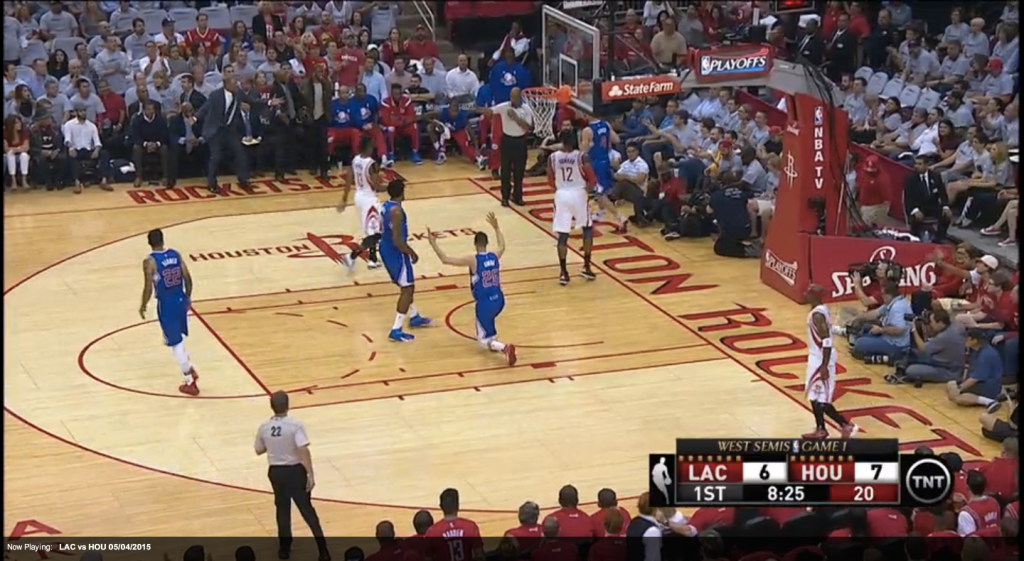 Especially the part where Austin raises his arms at the refs, the world, and the gods above, like, “Yo, did you see that foul?”

First-Round Epitaph: How the NBA’s Playoff Casualties Will Spend for the Future