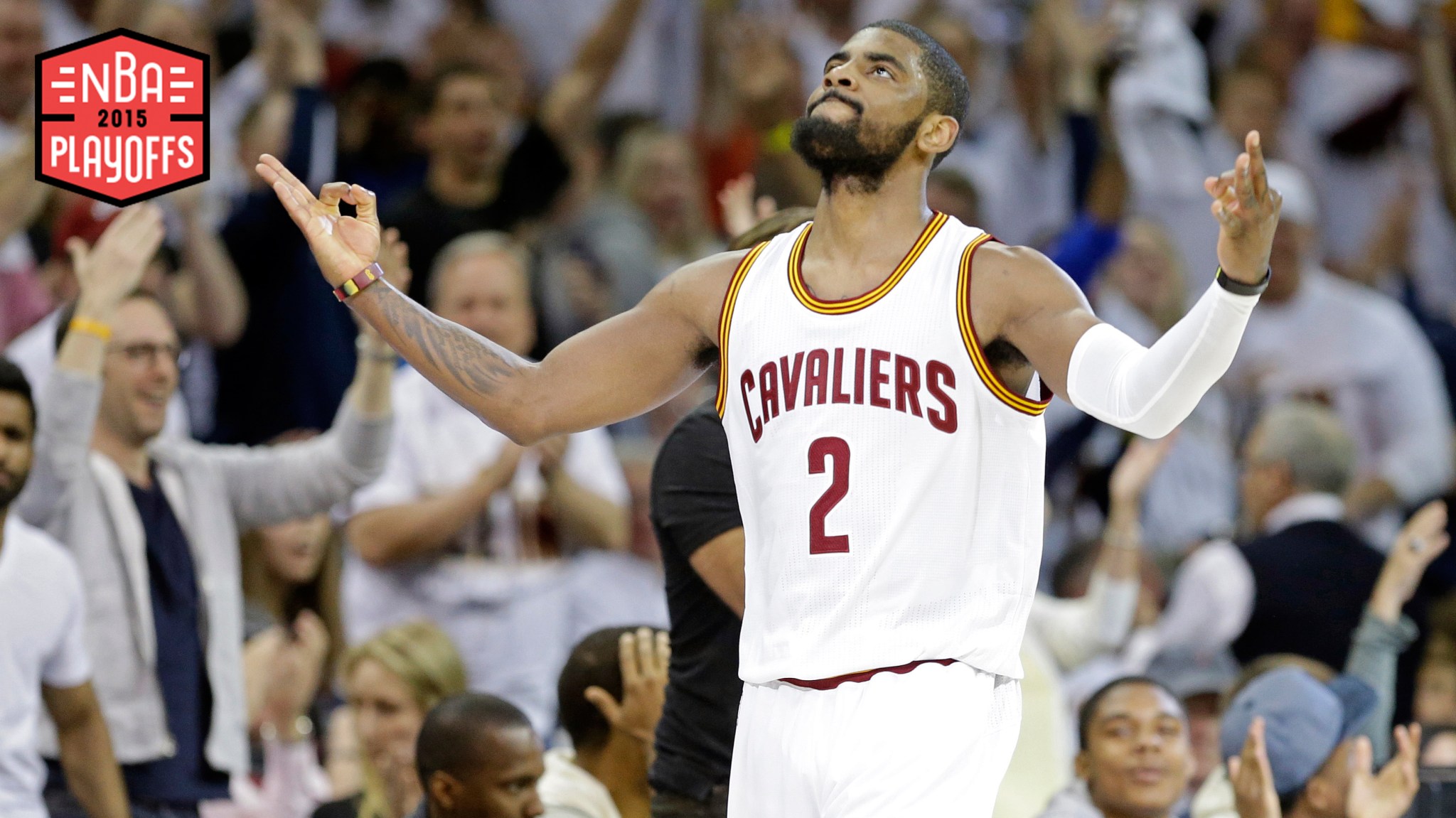 Chris Ryan: Dwyane Wade has 1 inch, 30 pounds, and three rings on Kyrie Irving, but damn if the Cavs point guard didn’t remind me of Flash against the Celtics on Sunday. In fact, calling Irving a Wade Guard sounds more accurate than calling him a point guard. Here was a confident scoring machine who needed the ball in his hands to get his offense going. According to SportVU, Irving went 8-of-12 from the field when he took three to four dribbles. With every dribble Sunday, it was like some celestial power was tapping a secret code into a game controller, giving him more power.

It’s just crazy how perception and semantics can change everything. Earlier in the season, Kyrie’s stinginess led to an alleged showdown with LeBron as the basketball world fanned themselves, wondering how Cleveland could succeed with a point guard who could go through an entire game with no assists. In late March, Irving reflected on the confrontation with James to Cleveland.com.

“He came up to me and was like, ‘One, you can never have another game with no assists,’ ” Irving said, describing James’ words. “‘You can damn near have just one, two, three, but you can’t have zero.’ And I was like, ‘All right, cool, it won’t happen again.’ And it hasn’t happened since that game.”

On Sunday, Irving had more than no assists. He had two. All the winning the Cavs have done in 2015 has changed the way we see Irving. He’s not a point guard who doesn’t pass enough, he’s a Wade Guard who needs the ball in his hands to get going. If he’s going to pour on 30 points in his first playoff game, and the Cavs are going to click the way they were clicking Sunday, who needs a point guard? 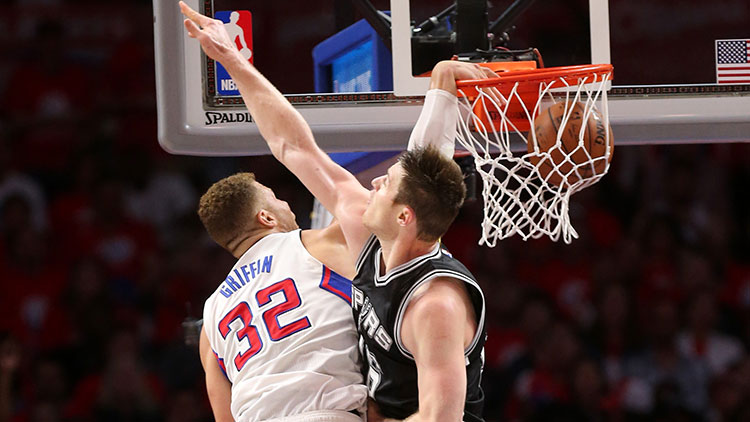 Danny Chau: Chris Paul isn’t necessarily someone you’d describe as playing bigger than his size. His compact frame informs the way he plays the point guard position. He’s a master of manipulating the other nine players on the floor to match the labyrinth of his imagination. Last night, there was a different energy to his game. He was more emphatic in how he was pounding the rock; his crossovers were less calculated and more physically overwhelming. This wasn’t quite the Westbrookification of CP3, but that raw energy made him look big. He was moving up and down the court like a downhill thumper of a running back.

Blake Griffin, on the other hand — at the behest of Charles Barkley, and of men and women around the world — played exactly his size. He played exactly his speed, his power, his tempo. In nearly 43 minutes, Griffin gave us a jaw-dropping look at his past and present. The Devastation of Aron Baynes was a callback to more innocent times, when it was still acceptable to watch Griffin through the lens of an awestruck child. But then you also saw the maturation of his post game in the patience he exhibited on his spins and pivots — he’s starting to play with the timing of his movements like Paul does. Sixteen of Griffin’s 26 points came in the paint; 16 of Paul’s 32 points came in the paint. Their synthesis last night was gorgeous.

None of it could’ve happened without the help of some unlikely friends. The Spurs were uncharacteristically horrid from the 3-point line, and Glen Davis made some positive contributions on both ends of the floor, none being more impressive than a defensive possession he helped secure when he fell onto the floor to prevent a driving lane at the rim. But even if, by some miracle, the Clippers bench manages to find enough net positives to fail upward three more times, it still won’t be the biggest revelation of the series. Because now we know what it looks like when the stars fully align in Lob City.

I Drive a Dodge Stratus

Jason Concepcion: Shouts to Masai Ujiri, GM of the Raptors, for keeping it 100 emoji flames, and for being perhaps the only person involved in the sports-entertainment industry who doesn’t know about not feeding the trolls. How else to explain Ujiri throwing slabs of red meat and ribs at the dank clapboard hovel underneath the bridge where master troll Paul Pierce had been quietly sleeping for lo these last two months?

Paul Pierce is the very last of his breed: an unrepentant, unabashed villain who delights in his villainy. We may never see his like again. Not the Kobe-style, “I don’t care what anyone thinks” type of serial killer — we see players from that mold surprisingly often — but the kind of clutch performer who genuinely understands the feelings of other players and their fans, and sees how to vandalize their emotions. Pierce is the kind of guy who delights in causing the sudden silence of an away arena. The sort of personality who drinks deeply from the tears of the children scattered about the lower bowl, clutching foam “WE’RE NO. 1” fingers and weeping bitterly against their parents’ breasts. He is the type of player who still occasionally pretends to be injured, but not too convincingly, because what he really enjoys is how angry people get at his pantomime.

As a Knicks fan, I’ve seen his work up close. He’s scored more regular-season points against New York (1,308) than against any other team in the league. All of them were seemingly of the bone-breaking, destroyer-of-dreams variety, invariably followed by some rub-your-face-in-it extracurricular antics. What I’ve learned from that pain is this: No matter what you do, ignore Paul Pierce.

Last postseason, Masai screamed, “FUCK BROOKLYN!” before Game 1 of the Raptors series versus the Nets. The Raps lost in 7, with Pierce providing the series-killing block.

This year, Masai reacted to Pierce’s assertion that the Raps don’t have “it” by first saying he didn’t have enough money to respond to Pierce — then, drunk on the atmosphere of Maple Leaf Square once again, yelling, “We don’t give a shit about Pierce!” Result: Pierce scores 20 (his highest point total since February 24), Toronto loses Game 1 at home, and Masai gets fined $35,000 U.S.

Paul Pierce is like Candyman. Never say his name. 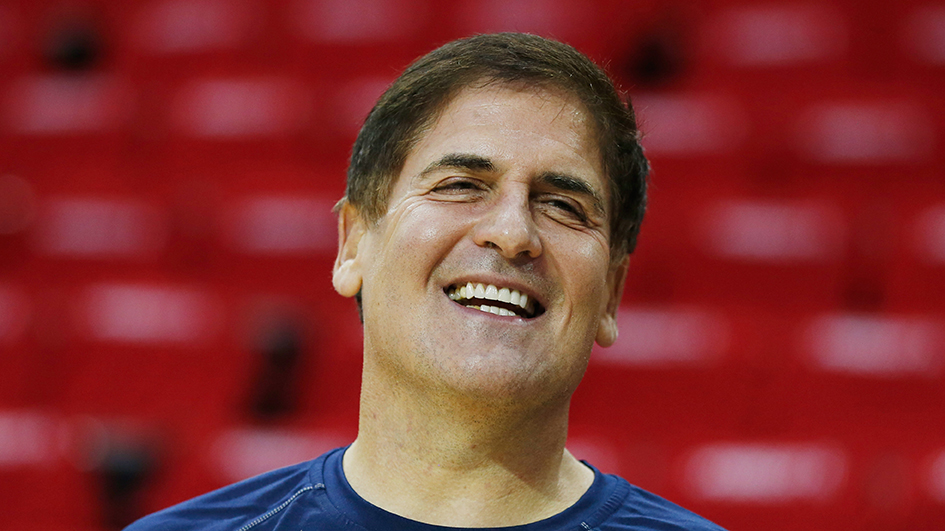 Jason Gallagher: We’re one game into this Mavs-Rockets series and the smack talk is as omnipresent as Jaqen H’ghar — and it’s exactly what we signed up for. Rejoice!

Here’s a back-and-forth that has already taken place between Mark Cuban and Corey Brewer:

Cuban: “That’s not a very good team over there.”

I don’t pretend to know sign language, but I’m pretty sure this roughly translates to “Please, Mark. Give me more reasons to want to torch your team. I’m seriously begging you.”

Cuban’s comments were obviously a shot at the Rockets, but think about what it must mean to former Maverick castaways like Brewer and Jason Terry. Both players used to play for the man. Both players wanted to keep playing for him. Despite Terry’s public comments about his desire to stay in Dallas post-2011, Cuban decided he wasn’t worth the money. Brewer was traded away to Denver with Rudy Fernandez and a second-rounder, or, as Brewer nicely puts it, “a bag of chips.”

This series was already pretty damned personal for these two. And now the owner that didn’t want them is proclaiming that the team they currently play for isn’t very good (in large part because of their presence, probably)?

I WONDER HOW THAT TURNED OUT?

Terry scored 10 points in the first half, and Brewer caught flames at the end, going for 13 in the fourth quarter. Terry and Brewer also combined to go 7-11 (ALWAYS OPEN) behind the arc.

Hey, Dirk. Do your best impression of what you think Mark Cuban should do moving forward. You’re so good at it. 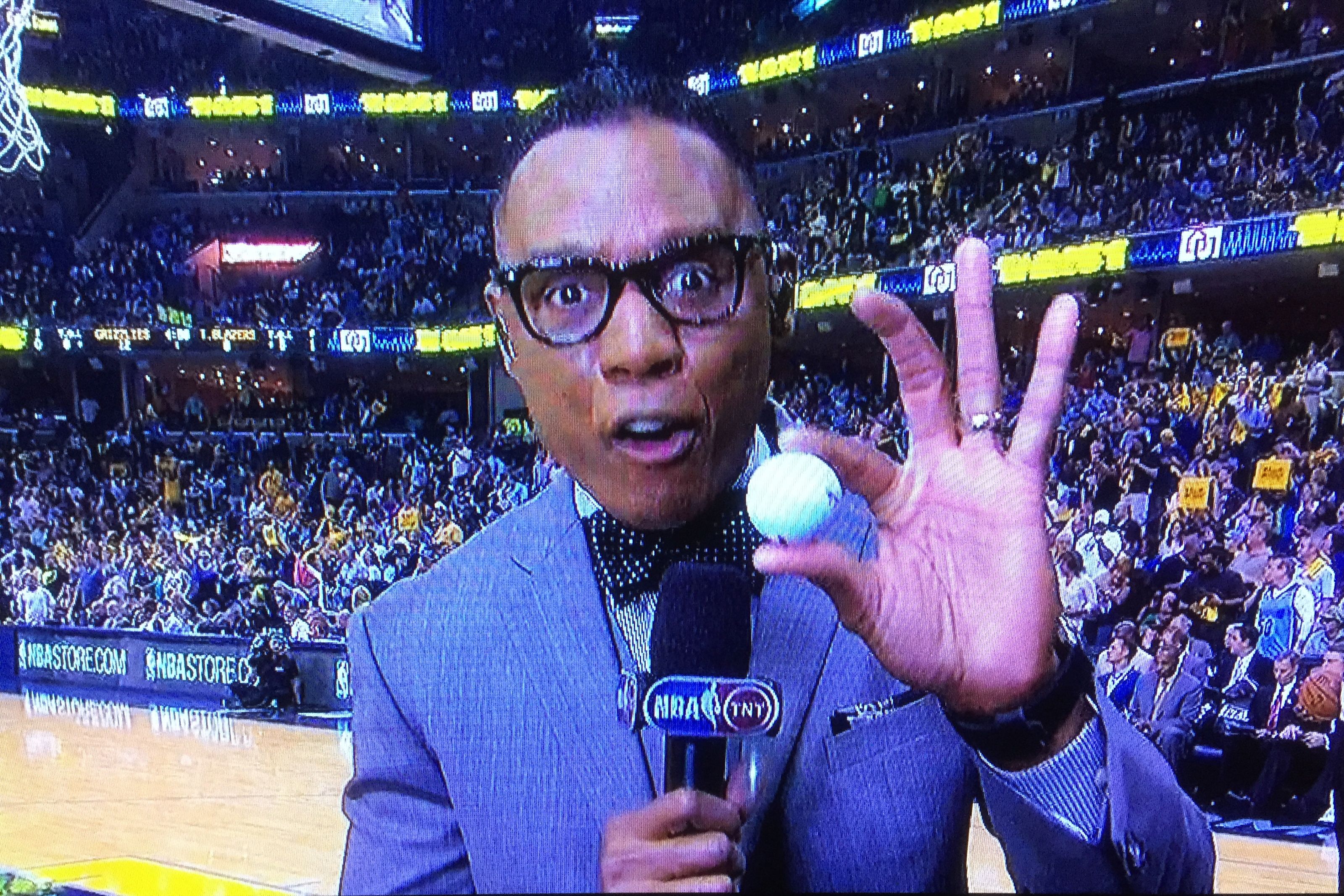 Andrew Sharp: Let me take two blurry shots from my television to explain why most NBA fans have given up on the Grizzlies. The first is TNT sideline reporter Lewis Johnson, above.

According to Johnson, Mike Conley wakes up every morning and feels like he’s got a golf ball underneath his foot. This, my friends, is how you execute a successful sideline report. Show, don’t tell. “Inflammation from plantar fasciitis” is an abstract concept until you imagine a golf ball attached to the bottom of someone’s foot.

Now we know. It helps explain the second photo. 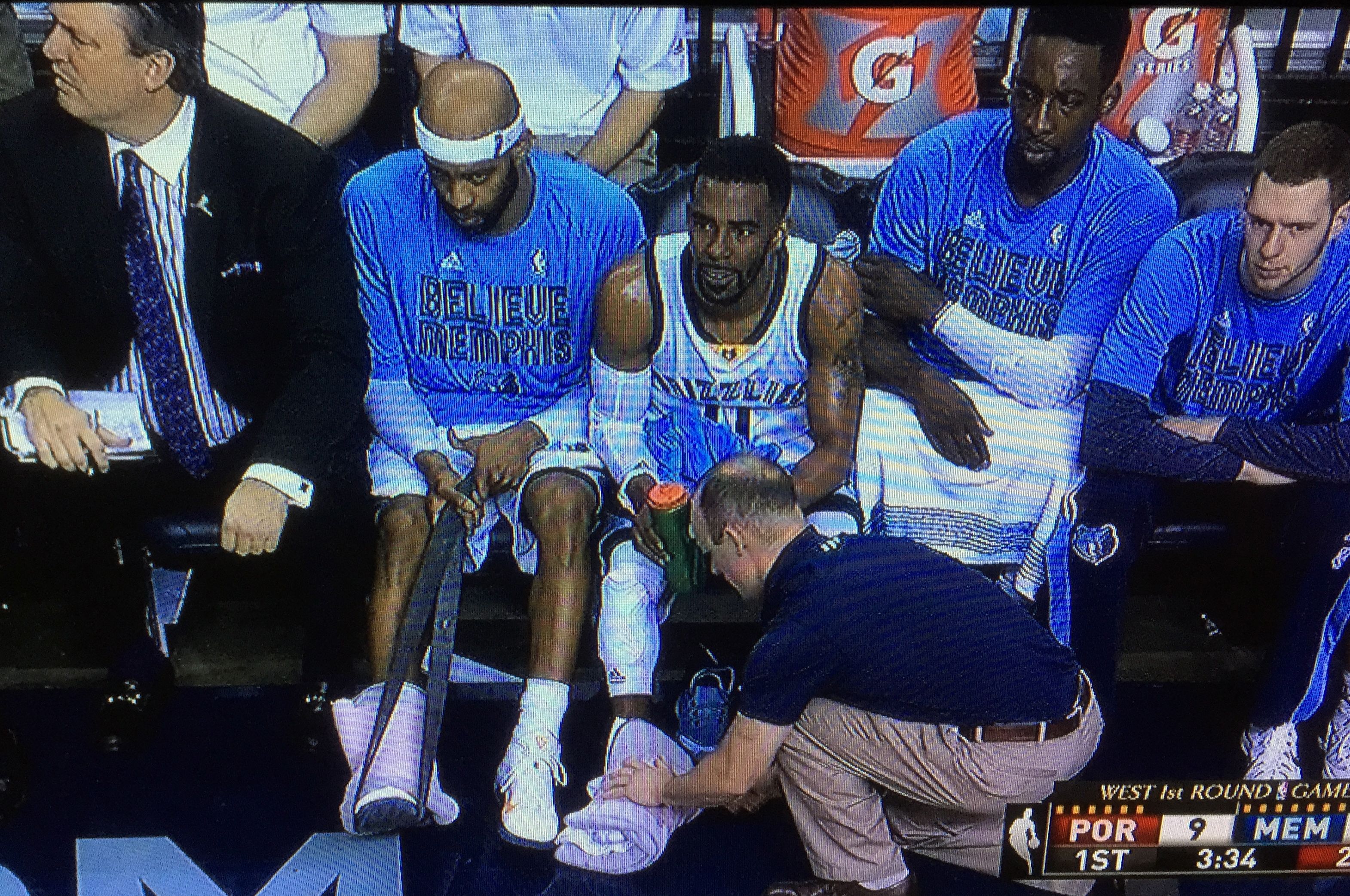 Everybody knew Conley was hurt, but not until we heard about the golf ball and saw first-quarter heating pad treatment — plus Vince Carter, whose ankles have apparently hit perma-ice status — did the extent of the Memphis crisis come into focus. That foot problem is not going away, and it hasn’t gotten better. Considering how important Conley is on both sides of the floor for the Grizzlies, it’s hard to imagine them doing anything without him. It’s why even Grizzlies fans have been depressed for the past few weeks.

But then Beno happened.

Put your feet up, Conley. Beno went 9-of-14 for 20 points, seven assists, and no turnovers. Beno’s got this. Beno’s cooking, and the kitchen smells like an ass-kicking.

Sunday night turned into a tribute to all the best Grizzlies wins throughout the “Grit and Grind” era. This is the team that takes a baseball bat to your chest. They’ve been doing it to the Trail Blazers all year.

They just need a little perimeter help, whether it’s from a hobbled Conley, Udrih, Courtney Lee, or Jeff Green. And that’s why this matchup with Portland’s Swiss cheese backcourt might be perfect. The Grizzlies have been rendered mortal for the past month or two, but in the wounded Blazers, they’ve got the perfect opponent to get a little swagger back.

Conley had 16 points of his own last night, and the teams don’t play again until Wednesday. The rest of this series won’t be as easy as Game 1, but Sunday was a good reminder of why people feared Memphis for the first four months of the year. I turned the game off after Zach Randolph barreled into LaMarcus Aldridge, drew a foul, then stomped around the floor with the entire Grindhouse chanting “Z-BO.” Memphis was up 29.

Maybe you remember the golf ball from Game 1. But by the end of it … I don’t know. The last thing Portland saw was the baseball bat.

‘The Grantland Basketball Hour’: The Four Most Intriguing Players in the Playoffs