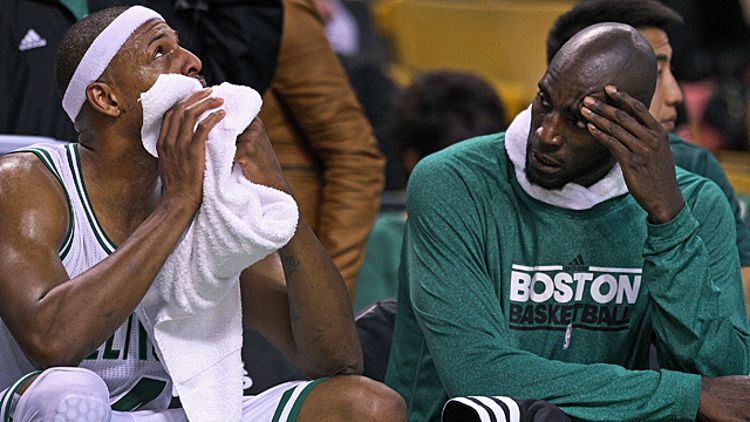 It Jumped Up a Notch

A couple of notes about the Rondo vs. Humps Garden Party …

1. When we do an oral history or a 30 for 30 about this in a decade or so, we’re going to find out that Rondo started it just to get out of having to come up with 10 dimes every night, prolonging the most-mocked streak in recent sports memory.

2. Credit due to the refs for keeping it under control for the most part. And Popeye Jones, who, I learned, is a Nets assistant and who was, according to Nets announcers, “peeling” Nets players out of the pile. There was a point when it was a bunch of Celtics surrounding Humphries, with no Nets in sight. Things weren’t looking too good for Humps.

3. That is, until Gerald Wallace arrived.

I guess I had never thought about Gerald Wallace, Universal Soldier, but given the reaction on Twitter, he apparently oversees large-scale, bare-knuckled bloodsport competitions in underground parking garages all over the Eastern Seaboard. Oh, and he can punch his way out of his own coffin. The floor is yours, Gerald! Forever!

4. This is how Gerald Wallace felt about being ejected:

5. This is what Kris Humphries tweeted after the game:

Anyone know where I can get a quick Tetanus shot in Boston?lockerz.com/s/265003890

6. Unrelated to the fight, but someone might want to change the batteries on Paul Pierce-Tron2000:

After watching Jerry Stackhouse knock down nine 3s in the last two games for the Nets — out of 12 field goal attempts, no less — it’s clear that basketball needs a catchy term for players who possess one redeeming skill: the ability to lurk in the corner and drill jumpers. The corner 3-ball is now such a staple of any effective offense that these specialists are the NBA’s equivalent of a LOOGY (in baseball jargon, that’s a lefty one-out guy). Just as relievers like Mike Stanton stick around until old enough to have grandchildren spitting sunflower seeds in the dugout, basketball players who can play a little defense and make roughly 40 percent of their baseline trifectas can remain on rosters indefinitely. So, without further ado, we present the term “BATHNOME.” BAseline THree, NOt Much Else. Also, it sounds like “bath gnome,” which is mondo-creepy.
— Ben Detrick

Kevin Durant Is on the Darkest Timeline 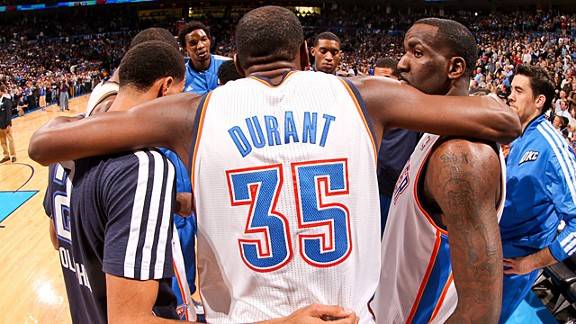 I know the facial hair beat has been a busy one in Oklahoma for the past month, but as I watched the Thunder host the Rockets last night, I was still surprised to see a lack of reporting on the coming and going of chin scruff in OKC. Lost amid all the talk of losing The Beard was any talk that Kevin Durant is now on the darkest timeline.

Durant’s goatee isn’t new, but it’s certainly more pronounced, and last night, it was a fitting look for the leader of a team looking to play the villain.

When James Harden was announced as part of Houston’s starting lineup last night, the crowd at Chesapeake Energy Arena reacted the way a Midwestern crowd not yet old enough to hate would — they cheered. The sentiments about Harden’s departure from the Thunder are varied. Some feel that he went back on the notions of sacrifice and team cohesion that he’d made a point of championing for so long. Some feel it was an amicable departure for a player who deserved a larger stage and a bigger paycheck. Either way, the fans in Oklahoma City made it known that their affection for Harden — the team’s first-ever draft pick — hadn’t been lost. His former teammates, no matter what was done or said before tip, did not communicate the same.

Harden’s line from last night — 3-for-16, 17 points — looks bad, but it’s made worse by just how those shots were missed. The Thunder blocked six Harden field goal attempts yesterday, all of them around the rim. The most emphatic came in the fourth quarter, as Harden looked to pull up for a short jumper in the paint before Russell Westbrook came from behind and sent it out of bounds. A high-five from Durant followed, and despite everything we know about the chumminess among the three young stars of last year’s Thunder, it was clear last night that OKC had something to say.

To go along with his teammates’ swats, Durant poured in 37 in the 120-98 win. Four of those came on one play in the second quarter — a 3-and-the-foul over Harden, after which Durant walked to the free throw line without a reaction. I have no doubt that the friendships between Durant, Westbrook, and Harden were genuine, and some part of the remaining two likely lamented the third’s departure. But last night, OKC seemed to make a point to remind everyone exactly what Harden left in favor of what might be his own darkest timeline.
— Robert Mays

Who put up a Thabeetian three-board, two-block performance against Houston, got into a heated jawing match with James Harden, and was briefly tossed from the game for seemingly shoving a ref before being invited back to the proceedings. Afterward, he tweeted this … 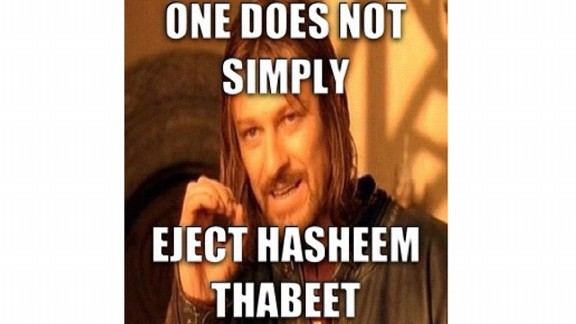 There Goes My Hero, He’s Ordinary

As the game started to slip away in the third quarter, Cook, much to the delight of shameless gunners everywhere, saved a bumbling possession with a 3-point attempt from the same area code as Newt Gringich’s moon base.

The internal monologue in Cook’s head was no doubt, “Relax, James, I got this.” 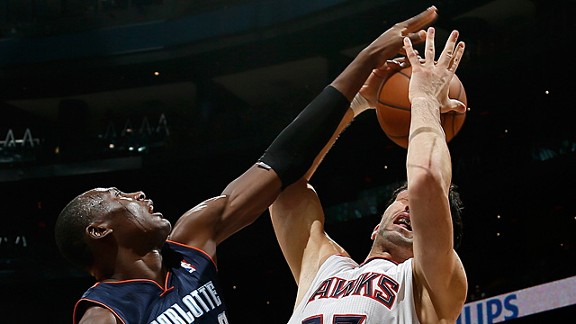 Every busy NBA night offers a random game in which crazy stuff happens — sometimes obviously crazy stuff, and sometimes crazy stuff only the saddest diehards would notice. Charlotte-Atlanta offered both. In the first half, Mike Dunlap played what might have been the nuttiest lineup I’ve seen all season, outside of one-possession lineups coaches use for particular late-quarter situations: Kemba Walker, Ramon Sessions, Ben Gordon, Bismack Biyombo, and DeSagana Diop. Diop hasn’t played much, and Dunlap had never before used the Diop-Biyombo combo — probably because it’s almost impossible to imagine Charlotte scoring a single basket with those two on the floor. This is presumably why Dunlap rolled them out along with his three-guard group, which has actually been quite miserable on both sides of the floor, per NBA.com.

Those three wonderful minutes provided some fantastic NBA moments, including Diop trying a running lefty hook off the dribble, a line drive that smashed off the top left corner of the square on the back board before ricocheting far, far away. Dunlap then replaced Biyombo with Byron Mullens, not exactly an elite defender, and the Hawks promptly ran the poor Diop-Mullens combination through several pick-and-rolls that left Al Horford so open that Horford literally didn’t know what to do; Horford on one possession surveyed the open floor from the left elbow and pump-faked a few times as Mullens and Diop debated Rajon Rondo’s impending suspension before deciding which one of them might want to casually jog out toward Horford. Mullens took up the job, and Horford simply glanced at Mullens as the big Bobcat stumbled by, waited for him to run himself out of the way and drove to the hoop for an open layup. He missed.

There was more! Dunlap returned to the three-guard lineup in the fourth quarter to goose a comeback behind Gordon’s hot shooting. It was almost risk-free, since Kyle Korver had left with back spasms, leaving Larry Drew to play all three of Lou Williams, Jeff Teague, and Devin Harris — another combination that had not seen the floor all season. Drew eventually said “Screw it!” and went the other way, sliding in Zaza Pachulia for one of the little guys and going super-big, with Horford, Josh Smith, and Pachulia.

And then both coaches did something cool: They just stuck with the mismatched lineups to see what the hell would happen. Smith had to chase Gordon and Walker around screens, fouling twice in quick succession while trying to keep up. Gordon had to guard Smith and then Pachulia one-on-one in the post, resulting in immediate double-teams and easy Atlanta scores before Dunlap went zone.

And then the obvious nuttiness happened — a classic ill-advised Smith 3 late in the game, a ridiculous Gordon 3 off the dribble with the shot clock expiring, and the Bobcats blowing a chance at a winning shot by somehow tossing an inbounds pass from one sideline all the way out of bounds on the other sideline without the ball touching anyone. Horford capped the scoring with two clutch free throws, notable because he had been 1-of-12 at the line over Atlanta’s three prior games.

The NBA on a Wednesday: something for everyone.
— Zach Lowe