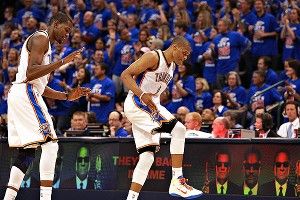 There are basketball shots that DO THINGS TO THE SOLAR SYSTEM. A ball rips through a net, and the arc of Venus BENDS. You can’t explain it. You just know from the emotional glitter that explodes all over everything that operating conditions are suddenly and permanently different.

Here’s the conversation I imagine Russell Westbrook having with physics as he stole the ball from Ramon Sessions, with the Thunder and Lakers tied at 70 with 4:10 left in the third quarter, and went in for the shot of the NBA playoffs so far.

RUSSELL: How we gonna play this thing, physics?

RUSSELL: Yeah, I mean, just put a bullet through the head of one of the major eras of NBA history, all in one acid-vaudeville scoop shot from like 21 feet out. And the foul. Don’t leave out the foul. I’m glad we’re on the same page on this one, physics.

[Russell throws up a ridiculous acid-vaudeville scoop shot from like 21 feet out as a frantic Sessions wraps him up. The ball banks in, and Russell wheels away from the basket doing a celebration that looks like something Charlie Daniels invented on his first spring break in hell. And the foul. Pandemonium and rejoicing.]

I’m not saying this shot ended Kobe’s career or single-handedly caused the imminent breakup of the Lakers or any of the other fun, dumb stuff that would be satisfying to write just now. But in this one game? Yeah, the shot changed everything. The third quarter had been back-and-forth. The Lakers erased a five-point halftime deficit and had taken a couple of narrow leads. After the shot, they never led again. We were tied at 70 when Westbrook stole the ball; within a couple of minutes, it was 73-80, and that was really it. A couple of minutes later it was 77-93.

Obviously, there were a lot of highlights in this game, and this series overall, for Thunder fans. But this — the steal, the circus shot, and the celebration that followed it — this was The Moment. Good-bye, moons of Jupiter.
— Brian Phillips

Or, to Put It Another Way … 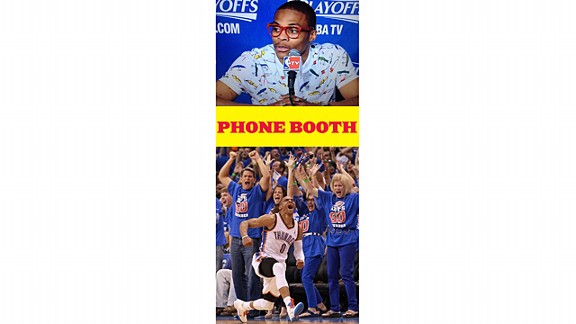 Is it just me or does Andre Iguodala really have the inside track on Iguodunka of the Night?
— Chris Ryan

A Peek Inside the Mind of Greg Stiemsma

Indiana Ron and the Temple of Doom

During halftime of Monday night’s Lakers-Thunder game, we learned that Metta World Peace, the famously fitful bundle of muscles and sporadic malevolence, recently requested that his teammates call him by yet another name: Indiana Ron. Yikes. Avoiding the obvious, we flung our net wide for more benign motivations. A fondness for Harrison Ford, fedoras, and eating chilled monkey brains? Reverence for Ethan Hawke’s oddly named young daughter? The workmanlike tenacity of upset-minded Pacers like Roy Hibbert and Tyler Hansbrough? Nothing doing.

It’s clear that Metta, in a personal attempt to jolt the Lakers back into contention, was conjuring the menace and physicality of an older, less peaceful incarnation.

Looking at the power dynamics of the Lakers, it’s likely the return of Indiana Ron is a response to Kobe’s battle cries for aggression and toughness. After all, the elbow that lodged in James Harden’s brain laid out a man who had taunted Bryant earlier this season. And, during the Denver series, Kobe publicly declared that Metta was the one teammate who would always “play with that sense of urgency and no fear.” It’s easy to view “Indiana Ron” as another comically schizophrenic alias, but it’s also admirable that Metta willingly sublimated himself into a psychologically unhealthy persona — one he has worked hard to exorcise — out of loyalty to his team. And from his gracious postgame interview, we’re optimistic that he failed.
— Ben Detrick

On his flagrant foul: “I don’t know how many was called in the history of the NBA, what, a thousand? Two thousand? Three thousand?”
— Yeah, Ron. Probably somewhere between 1,000 and 3,000. If I had to make a guess.

On his physical state: “I came in about 275, I got down to about 250, and you saw what I was doing in the month of April.”
— The stories that will be written about “Metta’s April” are endless. Truly the stuff of legend. Thirty days none of us will ever forget. “ABRIL DE LA METTA.”

On the current composition of the team, moving forward: “I’m not the general manger or the owner, so I won’t try to make decisions for them.”
— It really is unfair that Metta is neither the GM nor the owner. Some equal-opportunity employer the Lakers are.

On his best friends: “Al Harrington and Elton Brand, those are my best friends, but I don’t talk to them during the game.”
— Metta, tell us more about your friends.

On Lamar Odom: “I don’t talk to Lamar, I’ve known him since I was 11 years old. When he was at Dallas, I’d rough him up a little, but I don’t talk to my friends when I play basketball. But after the series, “Great Job.”
— I want to know everything about Ron’s friend group. I’d do just about anything for him to sync his phone contacts with me. It’d be mutually beneficial, because I’d have access to all of his famous and/or gully and/or famously gully friends and he’s have the number to every delivery Thai place on the Eastern seaboard.

On James Harden: “We play basketball in the summer at the same gym, so I’ll see him in the summertime.”
— I’ll bet an elbow to the temple that James Harden goes to a different gym this summer.

On the Thunder’s moment: “This is more about those guys, they deserve this moment, OKC, the city, Oklahoma.”
— Very kind, Metta. You’re well on your way to a second sportsmanship award if you keep this up. I still believe in you.
— Rembert Browne

This Is the Greatest Shot in the History of Televised Sports

And What That Shot Means for the Lakers …

When Russell Westbrook hit what seemed like his 20th pull-up jumper of the night, the one to put OKC up 17 and put an end to the Lakers’ season, the TNT cameras followed him for a moment as he strutted back to the Thunder bench. They then flashed to the stands, where one camera slowly zoomed in on a gray-haired man in a dark suit. Surrounded by cheering Thunder fans, he stood silently with his arms crossed and stared out at nothing in particular. The knot of his tie was strangely small, as if he’d hastily gotten dressed for an occasion he didn’t much feel like attending. Can’t blame him, really. It would be tough to go to your own funeral.

The Lakers and Mitch Kupchak have some decisions to make this offseason, the main one being how much roster overhaul is truly needed. The Lakers faded down the stretch over and over against the Thunder, and many have tacked it up to simple fatigue. On a team that lacks much if any bench productivity, there wasn’t much choice but to play Kobe Bryant and Pau Gasol until the wheels came off. That was fine, until they did.

Bryant isn’t going anywhere. Even if he didn’t have a no-trade clause, his $28 million salary next season would have about the same effect. No, Bryant will be here for the long haul, and with the type of commitment the franchise has shown to Andrew Bynum since he arrived in Los Angeles, it would be a surprise to see him leave town either (unless it’s in a deal for Dwight Howard). With how Bynum performed in stretches this season, it would be difficult to let him go if it wasn’t to obtain the league’s best center.

The man likely on the move if the Lakers do decide to shake things up is Gasol. Kobe may not be pleased with Gasol’s play, but it’s probably safe to say there are plenty of teams around the league that are. It was no secret that Houston wanted Gasol as part of the Chris Paul trade, and a team looking for a skilled big man to be a centerpiece in their offense is likely to come calling for the right price. The haul for Pau could be a start to the collection of role players the Lakers so desperately need. There’s a reason Jordan Hill was never a rotation player, that Ramon Sessions has been on a dozen or so teams, and that Steve Blake was bad enough to warrant dealing for Sessions at all.

Bryant said afterward that it was too early to assess what exactly the Lakers need to do this offseason, but if one thing is clear it’s that they need to do something. Kupchak’s championship Lakers started with a trade involving Gasol, and it feels like that’s how they might end.
— Robert Mays