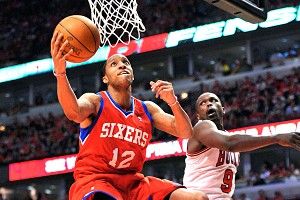 Hero of the Night: Evan Turner

Doug Collins started Evan Turner at point guard against the depleted Bulls on Tuesday night. During the first quarter and a half, watching him miss teardrop jumpers, blow transition layups, get punked by Carlos Boozer (apparently this can actually happen), and do the Evan Turner–standing-on-the-wing-with-his-arms-in-the-air thing (that is so sad nobody even bothers to Twitpic it), I kind of wondered if Doug Collins was going to ask for Turner’s gun and his badge before halftime.

Then, at some point after intermission, Turner stole Scottie Pippen’s soul and turned in one of those nights that makes you think, Hey, maybe Rod Thorn wasn’t high on bath salts when he spent a no. 2 overall pick on the Ohio State guard. Turner used all of his 6-foot-7 frame to lock up a variety of Bulls (Rip, Korver, Deng), ran the point smoothly and unselfishly (important when Lou Williams is in four-alarm fire mode), and scored 19, adding six assists and seven boards. Sometimes he can come off as gentle or soft, but Tuesday night when he put a ball-fake on Rip Hamilton that may have caused the veteran guard’s name to be legally changed to R.I.P. Hamilton, we saw a little bit of lethal weapon come out in his game. — Chris Ryan

The Loneliest Sound in the History of Organized Basketball

It wasn’t just quiet in Chicago during the fourth quarter of Game 2 on Tuesday night. It was forlorn. It was maybe the saddest, and definitely the loneliest, sound I’ve ever heard in basketball: not silence, but a sort of resonant aaaashshshshshsh, like 20,000 librarians shushing in tandem from about five blocks away. It was the sound of an arena full of fans who already knew their hopes had been vaporized and were now watching the hard evidence that they were right. It was as if someone took the roar of an actual, cheering basketball crowd, shot it in the head, and then recorded its ghost. If you wanted to know how much Derrick Rose’s injury meant to Chicago, you didn’t have to look at the box score from the Bulls’ 17-point loss. You didn’t even have to watch the game. You just had to listen. — Brian Phillips

Paul Pierce Tebowed last night. It’s been a really, really long time since anyone Tebowed. Like, if you were playing pickup hoops and your buddy made a particularly dexterous shot and then Tebowed, you’d look at him with an expression of confusion and horror that hopefully conveyed: “First of all, why are you doing that? That isn’t even a thing anymore. It wasn’t even that cool to do while it was still a thing, there are other, funnier sports memes to reference, and also now I have to think long and hard before I invite you to play with me again.” After the game, Pierce explained himself by saying, “You like to thank God for putting you in these positions,” and then looking up at the ceiling/sky/God, and I imagine even God rolled his eyes at that one. But Pierce also beat the Hawks on Tuesday night: With Ray Allen a DNP-ANKLES and Rajon Rondo a DNP-CHEST BUMP, Paul took over primary ballhandling and scoring, just like he had to if the shorthanded Celtics were going to steal a road split. Thirty-six points, 14 rebounds, and a classically clutch fourth-quarter sequence — first a fast-break dunk, then a pull-up 3, to put Boston up seven with a 1:15 to go — later, and Pierce is allowed to Tebow wherever he pleases. — Amos Barshad

Early this year, Doc Rivers sat Boston’s big names against the Hawks pre-playoffs, and Avery Bradley went off for 28 points, a career high. With Rondo out Tuesday night and Bradley shifting over to starting point guard, the moment was ripe for him to freak out against Atlanta one more time. As it turns out, that wasn’t really necessary: With Pierce hogging most of the freak-out vibes, Avery Bradley — who still looks like no one’s bothered to fit him for the right jersey size quite yet — made a quieter case for the continuing relevance of Avery Bradley. Deflected passes, ridiculous blocks, dives up the court (as CelticsHub tweeted, no. 0 might be faster than Rondo coast-to-coast); Bradley is just always around, doing stuff. Ask Jeff Teague about it:

Here’s the first 119 words of my post titled “The Atlanta Hawks are up 2-0,” written in my mind at halftime of Game 2:

They said it couldn’t be done, but guess what? We did it. We’re up 2-0, and let me be the first to say this could be our year. To win the whole thing? Maybe not, but to make it to the Eastern Conference Finals? Absolutely. Between an old/troublesome Celtics, a Rose-less Bulls, and an alleged professional basketball team in Philadelphia, it’s easily our side of the bracket to take. We’re playing well, Joe Johnson’s making good decisions, and (most important) no one’s hurt. Dare I say we’re the favorites to meet the Miami Heat in the series to go? This is amazing. They deserve this. We deserve this. I might cry.

And then we started playing badly. And then Joe Johnson started doing that thing where he dribbles in circles like a Harlem Globetrotter, but then scores points like a Washington General. And then Josh Smith got hurt. And then Paul Pierce Tebowed at half court. And then when lost. To the Rondo/Allen-less Celtics.

This is all my fault. — Rembert Browne

The thought came with about four minutes left in the third quarter, the Lakers up 12, Kobe with the ball on the right wing. Another lay-in had just gotten him to 29 on the night, and now, ball in hand, leaning back into Corey Brewer, he went to work again. At the moment, it was hard not to think: “Wow … that’s Kobe Bryant.”

Like most NBA fans of the past 15 years, I haven’t seen anyone play more basketball than Kobe. This marks Season 16 for the 33-year-old, and with five titles and seven trips to the Finals, Kobe has been the ubiquitous basketball presence of the post-Jordan era. That’s why it would be easy for those watching the game on TV Tuesday night to see another big night from Bryant, shrug, and move on.

Inside the Staples Center, there’s something to these sorts of nights. As Bryant buried three straight contested jumpers in the second quarter, the feeling that he was liable to do anything began to build. Every time he touched the ball in the half court, it seemed like it’d be going up, and more than that, everyone wanted it to.

That inclination for the fan is what perpetuates the myth of hero ball as effective offense, but in Bryant’s case, whatever actual realities come from those shooting binges don’t seem to matter. Los Angeles loves Kobe — you could feel it in Staples on Tuesday, and every night he hits that mode — and no city loves their star quite like this. Lakers fans are fiercely defensive of Bryant, in part because those 16 years in the league have come with ire on and off the court. Tuesday night, after a fast-break dish for an Andrew Bynum dunk, Bryant walked backed to the huddle, pumped his arms above his head, and asked the crowd to give him everything they had. “Wow … That’s Kobe Bryant.” — Robert Mays