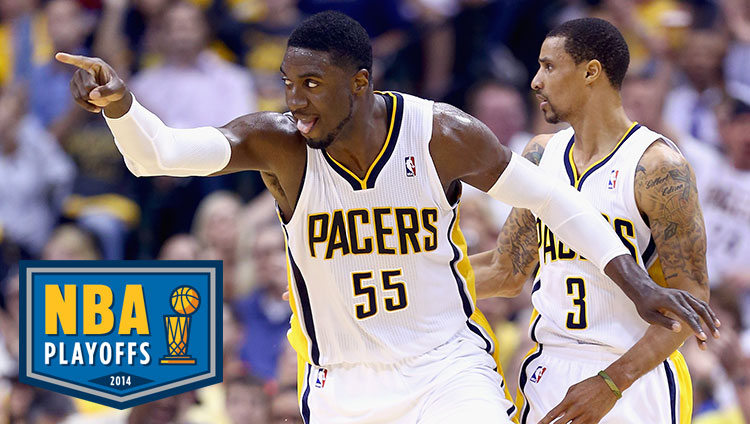 Back From the Dead

Andrew Sharp: I was actually in the car for the first few minutes of Pacers-Wizards. On the way home and away from the TV. So when someone sent me a text message saying “F— Roy’s awake,” there were complicated emotions. On the one hand, this was potentially bad news for the Wizards. On the other hand … Good for Roy Hibbert. It was hard to root against him.

Imagine if you were great at something and suddenly just turned horrible. Then imagine it happened with the whole world watching and making fun of you. That’s Hibbert for the past few months. Just since Monday, there have been awful rumors about him and Paul George, Internet libel from Gilbert Arenas and Tracy McGrady and almost everyone else with a smartphone or laptop, plus his teammates openly calling him out after the loss in Game 1. This has been happening since February, but this was the week when it all boiled over and he turned into the universe’s punch line. When he went fishing with teammates Tuesday and George put the below photo on Instagram, it obviously turned into another opportunity to hate.

Who knows what happened on that fishing trip. Hibbert credited the trip in his postgame interview. He said they talked about life, and nobody brought up basketball. The Pacers also got rid of The Andrew Bynum Curse, so maybe that solved everything?

Whatever it was, Hibbert vowed to be better in Game 2, and after eight weeks of making that exact same promise, this time it actually worked. His 28-point night (with nine boards and two blocks) wasn’t necessarily the dream scenario for the Pacers — they aren’t built to have him dropping 30 a game — but that’s a topic for Game 3. For now, let’s just all enjoy the 180-degree turn from two days ago.

This may sound stupid, but there were at least five times last night when a camera caught Hibbert backpedaling down the court and actually smiling, and it was awesome. Even as a Wizards fan, I couldn’t help but be happy for him. Is focusing on all this just a way to distract myself from how shaky John Wall looked in the final minutes and/or how the Wizards just gave away a very winnable playoff game? Yes, definitely. It also might distract you from Lance Stephenson carrying the Pacers in the third quarter and icing things in the fourth, or George bouncing back from an awful Game 1 with a much better night Wednesday.

But whatever. Game 2 was all about Roy.

I still can’t decide whether that was a travel, but it doesn’t matter. For one night, everything came up Hibbert. He was due.

Feel It All Around

Danny Chau: If you’ve ever heard Russell Westbrook break down his role as a point guard, it’s usually brief: It’s his job to keep competing, it’s his job to set the tone. He offers these short, plainspoken explanations that say nothing and everything at once. But words fail to describe the kind of impact Westbrook had last night. Hell, the stat keepers had to finagle a way to give Westbrook a triple-double at the end just to somehow quantify it for the record books.

Game 2 might’ve been the apex of what Westbrook can be as a point guard, but even that seems like it’s shortchanging his play. He was a life-giving property. It was one of those games when you could sense Westbrook’s energy seeped into every facet of the game — into the fans, into his teammates’ effort, into the Clippers’ heads. Westbrook was Johnny Depp in Transcendence, but good.

I can’t imagine how it must’ve been like to be a fan at that game, or to be Thabo Sefolosha in that short burst late in the third quarter when he managed a 3-pointer, a steal, a dunk, and another steal all in less than a minute. I imagine the buzz in the Chesapeake Energy Arena being like if the myth of Las Vegas casinos pumping in extra oxygen to give their weary gamblers strength were true.

After the game, Chris Paul claimed that “Russ probably played harder than all of us combined.” That probably isn’t true, but I can see why he’d think that. The entire Thunder squad was Russell Westbrook for a night, and they let themselves be him. #LetEveryoneBeWestbrook