NBA Overnight Part 2: You Thought We Forgot the Wiz?! 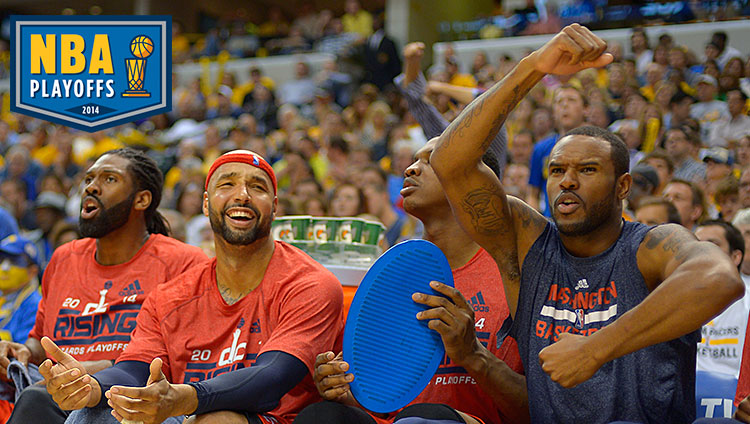 There was another game last night!

The Head of the Snake and the Hammer

Andrew Sharp: It was so beautiful. Not the 23 point win — that was great, too — but everything Marcin Gortat said about John Wall afterward. Seriously. Read the whole thing:

The text of Marcin Gortat's soliloquy on John Wall after the #Wizards' Game 5 victory over the Pacers: pic.twitter.com/rLf5lGK1oG

God bless John Wall. God bless the Hammer. I hope he never leaves D.C. It’s also a little disturbing how drastically emotions can swing in the span of 48 hours, but here we are.

Take Wall. Before last night he was a mess. It started at the end of Game 2, and then it turned into a full-fledged spiral over the weekend. He couldn’t shoot, he was making horrible decisions, and the Wizards were falling apart right along with him. He is the superstar — the head of the snake — so people focused on him, ignoring how awful Gortat and Nene had been right along with him. It was a horrible situation all around.

Before Game 5 Wall told Randy Wittman, “I don’t know how to get out of this slump. I don’t know what to do.”

Then it all stopped. Wittman told him to be confident no matter what, the Hammer had his back, and Wall and Gortat went out and torched the Pacers together. With John, it was drives to the rim to either score or get layups for teammates. With Gortat, he was just unstoppable around the rim no matter who the Pacers put in front of him. Then Wall came out after halftime, and everyone got a terrifying reminder of what happens when John Wall’s jumper falls. He went 11-20 from the field for 27 points last night, including 17 third-quarter points that turned a solid lead into a full-on blowout.

I wasn’t ready to get sucked back in last night, but the Wiz looked so good and Indiana looked so bad, it’s tempting. We’ll see. I’m just glad this team didn’t roll over and die, because losing four straight to this miserable Pacers team would have made it hard to enjoy any of the progress from the first round.

Now? Who knows. Game 6 is Thursday.

PARTY’S NOT OVER YET.

Does He Shave His Armpits?

Gortat: "You’re a 30 years old guy, you want to look like a freaking caveman? Is a normal thing" pic.twitter.com/8ngCkXCYqU

‘Tis Better to Give

netw3rk: Tuesday, May 13, 2014 A.D. The basketball world witnessed the grayish, palsied hand of sports history tremulously carve its initials into the stat sheet of Game 5 of the Eastern Conference semifinals between the Indiana Pacers and the Washington Wizards. Per Basketball-Reference.com, Indiana’s Game 5 rebounding deficit of 39 represents the largest rebounding gap in playoff history and is tied for the third-worst mark of all time. Marcin Gortat and Trevor Ariza outrebounded the entire Pacers squad on their own.

Now, the Pacers will win this series. Probably. Only eight teams in NBA history have come back from a 3-1 deficit to win a playoff series, and all of those teams had a better regular-season win percentage than these Wizards. And nothing screams “WIZARDS” like blowing out the top-seeded Pacers on the road, and Marcin Gortat Polish-hammering out Olajuwon numbers, only to set up a spiritually deflating home loss in front of a dewy-eyed Wolf Blitzer. Should the Pacers advance, which they will (right?), they are custom-built to contend with Miami.

Now, that said, in the wake of this historic game, I think it’s time to step back and really appreciate what a fantastically mercurial team the 2013-14 Pacers are. This is a team that went from being a defensive colossus, choking the life out of all they surveyed, to a free-falling wonder of emotional fragility so perplexing that seemingly the only way to explain it was to invoke the most ancient kind of gossipmongering the human imagination can conjure. Think about it. These Pacers went from trendy title contender to “Did someone sleep with someone else’s girlfriend?” in the space of four months! Stop and appreciate these Pacers, whether they flame out or fly high. We won’t see anything like them for a while.

Cheap Heat Podcast: Daniel Bryan and Kings in the Ring