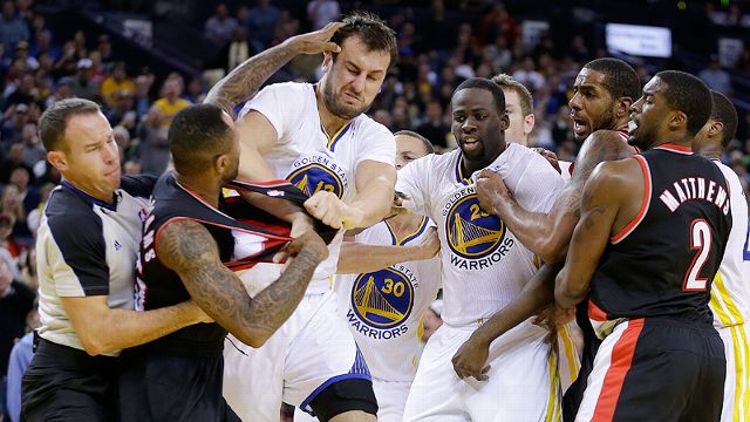 This past NBA weekend gave us the most depressing news of the season, but that’s all the more reason to focus on two excellent feuds on Saturday night. The NBA regular season is long, and in the winter months, it’s the hate that keeps us warm and keeps things exciting. When the world gets you down, some good old-fashioned NBA BEEF will always brighten everyone’s spirits. Right?

We begin in the Bay Area.

Feud: Joel Freeland and Andrew Bogut. It’s actually surprising that Bogut doesn’t get into more fights. You’d think half the league would be ready to jump in and take a crack at an obnoxious Australian. Here, it was a Bogut forearm to Joel Freeland’s throat that kicked things off and led to Bogut taking on, like, six different Trail Blazers.

Was This a Real Fight? Of course not. Lots of pushing and shoving, some threats, and zero actual violence. That’s what makes NBA fights so much fun. NBA players “fight” like frat kids in a bar. There is endless shit talking, everyone comes out of the woodwork to shove each other, but nobody actually wants to get punched in the face.

When two 7-foot giants (Bogut, LaMarcus Aldridge) and one very angry little Mo Williams are orbiting toward you … Yeah, we’d all react a lot like the concerned English professor up there. We are all Terrified Warriors Fan.

But LaMarcus wins out because the Blazers went on a 32-17 run that destroyed the Warriors and turned a double-digit deficit into a 12-point win. Aldridge finished with 30 points and 21 rebounds, including 14 and eight in the fourth quarter after the fight. In other words, not only did the Blazers fight back against Bogut, they ended the night with everyone remembering how great they are and gawking at LaMarcus Aldridge. Beef brings teams together.

Ejected Blazers Wes Matthews & Mo Williams greeted teammates outside lockeroom after GS win. Aldridge told them, "(The win) is for y'all."

The Feud: Everyone. Outlaw giving Redick the McHale clothesline helped escalate things, but it’s pretty clear: These teams just hate each other.

Boogie’s response? NOBODY SHAKE HIS HAND.

Background: My first trip to Staples Center was for a Clippers-Kings preseason game back in October. I had seats about 10 rows off the floor, which meant (a) I had a spectacular view of creepy Donald Sterling for the entire game, and (b) I had a perfect seat for Chris Paul’s halftime shootaround meltdown.

I still have no idea what Boogie did to piss him off. Maybe he bumped him at halftime? Maybe he said something? Whatever it was, it led to Chris Paul standing at half court for a good five minutes yelling toward DeMarcus Cousins while both teams were shooting around before the third quarter. Boogie completely ignored him the entire time — the ultimate villain move — which only drove CP3 crazier.

It started at half court, and by the end of his five minutes of threats, Chris Paul had made his way to almost the 3-point line, yelling “I’ll pay the fine!” at Boogie. He said this about five different times. Now, would CP3 actually start a fistfight at half court during a preseason game? Probably not. Chris Paul’s smarter than that.

Chris Paul is more diabolical than that.

Chris Paul might just ruin Boogie’s entire life if we’re not vigilant. Remember we had this conversation when Boogie is broke and alone on a curb in Sacramento, staring back at his house that was just burned to the ground. Until then? Clippers-Kings is a sneaky heated rivalry for anyone who wants to stay up late for West Coast games.

They play next in Sacramento on Friday, November 29, which should be a perfect way to unwind after Thanksgiving. The best way to wash down turkey is with some BEEF.