Nature, Nurture, and Knockouts: The Continued Rise of Adrien Broner and the Sooner-Than-Expected Fall of Seth Mitchell 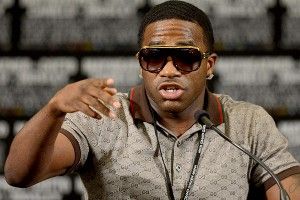 Seth Mitchell was yesterday’s news. It was about five minutes after midnight, meaning it was now the day after Mitchell got knocked out in two rounds by 5-1 underdog Johnathon Banks. Mitchell, the man projected just a couple of hours earlier as the brightest hope for American heavyweight boxing, was invisible to the reporters trickling into the postfight press conference. Had Mitchell defeated Banks, he would have been swarmed by writers looking for exclusive quotes before the formal presser began — or just looking for an excuse to talk with a possible future heavyweight champion.

But Mitchell lost to Banks. So he was left alone to swipe at his smartphone. That’s boxing. That’s sports. It gets very quiet when you’re no longer “hot” or “next” or “it.”

And so it follows that things are louder than ever in Adrien Broner’s world. The scene of Mitchell’s undressing served also as the scene of Broner’s fitting for a lead role. Saturday night, the brash lightweight gave a performance against Antonio DeMarco in Atlantic City that backed up every self-celebratory word he’s ever uttered. In the main event of the seven-fight card, Broner looked like a future pound-for-pound king. In the co-featured bout, Mitchell looked like a future trivia question answer.

And both looks were probably inevitable. There’s a big difference between being a boxer and trying to become a boxer. Broner is a boxer. Every movement he makes is informed by physical and mental programming that began at age 9. Mitchell is an athlete trying to box. And all of us who thought Mitchell would win this fight and a few more before the massive tumble backward — myself included — forgot just how hard this sport is when your brain has to tell your muscles what to do instead of your muscles knowing what to do on their own.

In a sense, it’s amazing that Mitchell got this far before unraveling. He first donned boxing gloves at age 25 and he made it to 30 before that fact caught up with him. The former Michigan State linebacker beat plenty of experienced opponents in getting through his first 26 pro fights without a defeat. He beat them with athleticism, physical strength, hard work, and, well, them all being limited in one way or another. Michael Grant’s name is mostly used as a punch line now, but Grant was a 6-foot-7 elite athlete who found boxing in his 20s and got all the way to challenging Lennox Lewis for the world heavyweight title before he went horizontal. That’s remarkable. Mitchell was a couple wins away from a similar fate — a certain drubbing at the hands of Wladimir Klitschko, with a $2 million or $3 million payday attached. But Banks, a man who is 30 years old just like Mitchell but who has been boxing for exactly half of those 30 years, knew instinctively when to punch, where to stand, and how to protect his jaw in a way that Mitchell didn’t.

The result was a three-knockdown second round and a lot of “back to the drawing board” platitudes from Team Mitchell. In fairness, the Mitchell experiment is not necessarily over. Sergio Martinez began boxing at age 20, suffered a brutal loss to Antonio Margarito two days before his 25th birthday, and developed into a pound-for-pounder in his mid-30s. It’s not impossible that Mitchell can retool against soft opposition for a couple of years and make another run. But that chin — the one on which Chazz Witherspoon planted a red flag in April — tempers any such optimism. As hard as it is to learn to box at an advanced age, it’s even harder to learn how to take a punch at any age.

Neither of these are lessons Broner appears to have to worry about. With his speed and reflexes, Broner has earned praise throughout his rapid ascent about how “gifted” he is. And make no mistake, he is gifted. But he’s also highly skilled. Mitchell, in different ways, might be just as gifted as Broner. But he lacks that elite level of skill. And he lacks that extraordinary composure that sets Broner — and the fighter to whom Broner is most often compared, Floyd Mayweather — apart. Broner could find himself in an earthquake and calmly bust out a Mother Nature–assisted dance move. He could get roasted by Don Rickles and playfully roast right back, while casually dropping in plugs for his Twitter and Instragram handles. Broner, a self-proclaimed Twinkie lover, is so poised that he didn’t even crack emotionally when the news broke about Hostess going out of business.

On paper, DeMarco represented the toughest test of the 23-year-old Broner’s career. For his previous four fights, Broner handpicked no-hopers, a sure way to raise doubts. In DeMarco, Broner hand-picked the best possible opponent in the 135-pound weight class. We all knew DeMarco couldn’t match Broner’s speed or slickness, but the Mexican southpaw was the sort of bulldozing badass who had two theoretical chances to make Broner’s life hell: landing a big shot early (as he did in September against John Molina) or applying steady pressure and counting on an iron chin to keep him around until the pressure paid off.

Instead, Broner won every round and systematically dismantled DeMarco. For the first three rounds, “The Problem” made good on his nickname with single shots, particularly a counter left hook that discouraged DeMarco from all-out aggression. Despite a two-and-a-half-inch height advantage over Broner, the 5-foot-10 DeMarco has never been the type to box from the outside. He’s most comfortable in close. And he succeeded from the opening round in getting into the range he wanted. But Broner was even more comfortable at that range. It removed arm length from the equation and allowed the Cincinnati sensation to show mesmerizing infighting chops.

When DeMarco decided to accept whatever counterpunching punishment was coming his way and open up offensively in the fourth, he became well-acquainted with Broner’s right uppercut and overhand right. The fifth was a three-minute Broner highlight reel, as he landed an ungodly 52 of 78 power punches, the fight taking on a Mayweather-vs.–Arturo Gatti feel. DeMarco endured until a six-punch combination dropped him in Round 8. This doesn’t seem possible, but by CompuBox’s count, Broner landed 37 of 45 power shots in what turned out to be the final round.

What makes Broner’s performance especially noteworthy is that he never let his dominance become monotonous. If we are to keep using the Mayweather comparison, this was more like Mayweather vs. Diego Corrales than Mayweather vs. Juan Manuel Marquez. Broner left fans wanting more, a fact that will presumably be reflected on future paychecks.

It seems appropriate now to stop holding Broner’s one disappointing effort, against Daniel Ponce De Leon in early 2011, against him. That’s been a constant “yeah, but” in assessing Broner’s ceiling. But he was 21 then, he’s 23 now, and he’s progressed as a fighter. Hey, Muhammad Ali was fortunate to get the decision over Doug Jones in his 18th pro fight, but he won the heavyweight title 11 months later and we stopped wondering if he was a fraud. Broner’s destruction of DeMarco removed whatever stink lingered from the Ponce De Leon affair.

Broner even managed to be more charming than grating before and after the DeMarco fight, a balance that frequently tilts the opposite direction. There will always be reasons to root against Broner (not the least of which is that he wears a Yankees cap but he’s not from New York). But it was hard not to embrace Broner when he offered this one-liner at the postfight press conference: “I don’t lose. I don’t even like losing weight.” It was cocky, it was clever, and it was self-aware, a callback to Broner’s worst public-relations moment, when he didn’t even try to make weight for his July bout with Vicente Escobedo and instead paid out of his purse to preserve an unfair size advantage. Broner is no longer running from that controversy. He has chosen to meet it head-on — with humor. And it’s working.

Of course, not all of Broner’s attempts at comedy work. Some of his material is forced. What Broner does in the ring, on the other hand? That’s all natural. He’s a boxer, and he has been for about as long as he can remember.

There’s an art to boxing, and it can’t be mastered in a few gym sessions. To his credit, Seth Mitchell got pretty far without mastering it. Maybe he’ll go further still. But for now, to rely on the overused Dennis Green quote, he is what we thought he was.

Adrien Broner, on the other hand, just might be what he thinks he is. And that’s a frightening possibility.