Money Walks: On Mayweather’s Selection of Guerrero … and Showtime 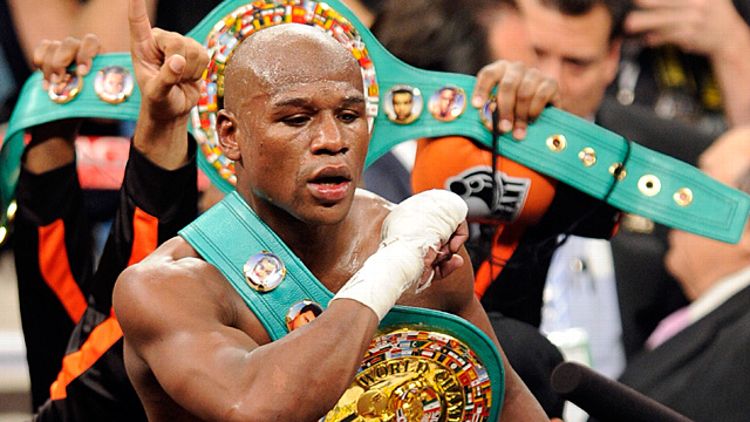 Perhaps the most remarkable thing about Floyd Mayweather’s ascent to his position as king of the boxing box office is that he’s done it without being an exciting fighter. Rather, he convinces fans to pay for his fights by distracting them from what will actually happen in the ring. He’s a master manipulator, the likes of which boxing hasn’t seen since Muhammad Ali. And with the official announcement on Tuesday of his next fight, Mayweather has done it again. He’s whipped the boxing world into a frenzy despite choosing the modest-profile opponent we assumed all along he was going to choose.

On May 4, Mayweather will take on Robert “The Ghost” Guerrero. What makes the announcement worthy of talking-head analysis 10 weeks before the fight is that he’ll face Guerrero on Showtime pay-per-view. After a 15-year relationship with HBO, the network that aired 25 of his last 26 bouts, Mayweather, the biggest draw in boxing, has signed a six-fight deal with the top contender to HBO’s throne. His defection forces us to ask: Is HBO now the top contender to Showtime’s throne?

Rarely does the mere announcement of a fight pack as many angles and sub-angles as this one, but damn you, Floyd Mayweather, you’ve manipulated us into breaking down five questions worth exploring in the run-up to Cinco de Mayweather weekend, 2013:

1. How did Showtime pull this off?

Mayweather’s nickname is “Money,” and apparently Showtime offered more of it than HBO. The press release reads, “Mayweather’s new deal is by far the biggest in the sport of boxing (specific financial details are contractually confidential).” The parenthetical means we’ll have to take them at their word about the record-setting scope of the agreement. But clearly it was a sweeter deal than HBO put together, and Mayweather was also likely won over by the promotional reach of CBS, which owns Showtime. In contrast, HBO’s parent company Time-Warner doesn’t own a free network and can’t offer as much exposure to mass audiences.

The seeds for this move were planted in 2011, when HBO executive Ross Greenburg resigned as the network’s boxing boss, Showtime Sports head Ken Hershman replaced him, and Showtime replaced Hershman with Stephen Espinoza, a one-time lawyer for Golden Boy Promotions. That set in motion a gradual migration of Golden Boy fighters from HBO to Showtime, and while the relationship between Golden Boy and Showtime strikes many observers as inappropriately cozy, there’s no denying that it has been effective. Showtime hires a Golden Boy guy and less than two years later Mayweather, who has partnered with GBP to promote his fights since 2007, ends up on Showtime. It would have been absurd to suggest this at the time, but losing the highly respected Hershman turned out to be the best thing that could have happened to Showtime—because they made a brilliant strategic move in selecting his replacement.

2. How devastating is this for HBO?

Short term, it’s a major financial blow. Mayweather’s last six fights have averaged more than 1.4 million pay-per-view buys. At $70 for the HD broadcast, that’s $98 million in gross revenue generated per bout—not counting the live gate or the harder to quantify value of HBO being able to replay the fight the following week. For a little perspective on what an average of 1.4 million buys means, Oscar De La Hoya vs. Felix Trinidad sold 1.4 million PPVs in 1999, and that number nearly doubled the previous non-heavyweight record.

But for all of Mayweather’s star power, is losing him a week before his 36th birthday that distressing for HBO? He’s fought four times in the past five years; are we really supposed to believe he’ll fight six times in the next 30 months (to potentially bring his record to 49-0), as his Showtime contract suggests? What if he only fights two more times? What if he loses this year? Then will anyone view this as a death blow for HBO?

This hurts HBO’s reputation more than anything else. Showtime was the little brother for decades, occasionally making the rivalry competitive but never actually threatening to take the upper hand. Now they would seem in range of doing just that. HBO stalwarts Manny Pacquiao and Miguel Cotto (whose most recent fight was on Showtime) are in decline. Without Mayweather, HBO is suddenly running low on sure-thing superstars. They have a few pound-for-pound guys (like Andre Ward) and a few stars of the future (like Adrien Broner), but Pacquiao–Juan Manuel Marquez V is the network’s only hope for a million-buy event in 2013.

Two quick side notes: First, it’s worth wondering if Hershman will thrive in the underdog role, as he did at Showtime. Hey, “Nobody believes in us” might extend to TV executives too. And second, do fans care at all which network a fight is on? This whole industry-rocking development might be irrelevant to those who don’t make a living off boxing. Aside from trading HBO’s broadcast team of Jim Lampley and Max Kellerman for Showtime’s Mauro Ranallo and Al Bernstein, which company distributes the pay-per-view is of little consequence to the consumers shelling out $70 for a fight.

3. Who is Robert Guerrero, and does he stand a chance?

When Manny Pacquiao jumped to Showtime to fight Shane Mosley in 2011, the network shakeup became a clever part of the fight’s narrative. PACQUIAO JUMPS TO SHOWTIME!!! was a smokescreen, meant to distract fans from the disappointing truth that the Filipino champion was signing up for a mismatch against a former great. This time, the business side story is no diversion. Guerrero turns 30 in March and is in his fighting prime. He has lost only once (he avenged the defeat), and he earned his way onto the short list of potential Mayweather opponents by emerging victorious in a savage affair with Andre Berto last November. Guerrero doesn’t bring much to the table from a personality perspective, so the Showtime deal is useful in drumming up publicity that Mayweather’s relatively vanilla opponent cannot. But from a pure sporting perspective, this is a justifiable fight.

Mayweather is a clear favorite over anyone at or below 154 pounds. So he’ll be a clear favorite over Guerrero. But this is no mismatch. And the way Guerrero fought against Berto — plowing forward, roughing Berto up, showing no fear of being hit, but also using skill and ring intelligence — is just reminiscent enough of Jose Luis Castillo, who arguably deserved a decision over Mayweather in 2002, to allow fans to over-think things and talk themselves into a crazy upset pick as the fight nears.

4. What was up with Floyd’s tweet two weeks ago about fighting Devon Alexander?

It was pure misdirection, a little something to distract the boxing world while Mayweather weighed the HBO and Showtime offers. Since even Alexander knew nothing about negotiations for a fight with Floyd, it’s safe to assume there were no negotiations. This was just the master of manipulation giving everybody something to fuss over while nine-figure negotiations continued behind the scenes.

None of us bought it, by the way. But that wasn’t the point.

5. Will Canelo Alvarez vs. Austin Trout be on this card as well?

Not if Golden Boy CEO Richard Schaefer has anything to say about it. It’s no secret that the freckled phenom Canelo is in line to face Mayweather in September. That fight would generate more money than any other matchup in boxing right now. Canelo wants to test himself first against the undefeated Trout, who defeated Miguel Cotto in December to emerge as the top threat at 154 pounds. Alvarez even went so far as to tweet last Friday that the fight was a done deal. But Schaefer says otherwise. The fighter is thinking like a fighter, and the businessman is thinking like a businessman. We know Canelo will fight on this card. We don’t yet know against whom.

Regardless of his opponent, Canelo – a marquee attraction in Mexico — will boost the PPV buy rate, but if he happens to be scheduled for a real fight against Trout that fans think he could lose, it might push the show past 1.5 million buys. That was the number generated last May by Mayweather-Cotto with a Canelo-Mosley co-feature.

Manchester City Does the Harlem Shake

Q&A: Keith Smart on the Art of Coaching Boogie Cousins and the Kings' Defensive Struggles