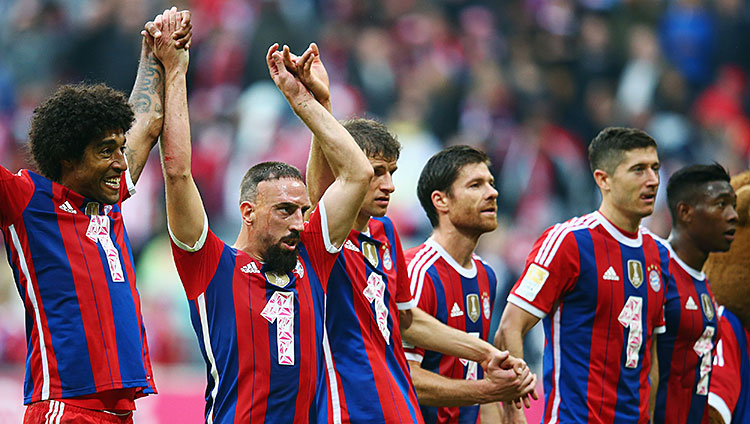 It’s Champions League time. To help you get set up, we’re going to go on a brief tour around Europe, to get you up to date on all the major non–Premier League teams. Our tour will take us through Germany, Spain, and Italy, with a brief stop in Paris to round things out.

Bayern Munich are always going to be one of the favorites, though it’s starting to become a little troubling that, more than a year into Pep Guardiola’s reign, they still haven’t quite jelled. Pep’s most recent wrinkle was a surprising late-transfer swoop of Xabi Alonso, who was immediately slotted in as a deep midfield string-puller. Even if they’re not the finished product, Bayern sit tied atop the Bundesliga and will be one of the favorites to take home the Champions League title.

Dortmund keep losing their best players, often to their biggest rivals, and still manage to compete in Germany and in the Champions League. On the surface, it’s an inspirational story. Look under the hood, and you might notice they’ve comfortably got the second-most resources in Germany, and they’ve had their pick of replacements for their departed superstars, including a man who likes to wear Spider-Man masks.

Regardless of where they fit in the pecking order, Dortmund are undeniably fun to watch — an aggressive attacking team with heaps of talent, that manages to play like more than just a collection of superstars (possibly because they are a collection of not-quite superstars).

World-class athletes who play like kids on a wicked sugar high. They scored 10 seconds into the first Bundesliga game of the year and are now tied with Munich atop the Bundesliga table. Oh, and they’ve already beaten Dortmund once this year. Did I mention they’re fun?

Leverkusen may not contend for the title, and they may not make it out of the Champions League group stages, but if they go down, it will be in spectacularly entertaining flames. Also, don’t sit down late for their matches — they have a habit of scoring very, very early goals. How early? They’ve scored in the first five minutes of four of their six games this season. Expect lots of goals — they’ve played only one match so far this season in which they made fewer than four.

Don’t Get Your Stink on Us: Schalke 04

They are not good this year. They have a grand total of one point, through three games (though, granted, it was from a late weird draw with Bayern). Schalke have plenty of entertaining pieces (including 20-year-old Julian Draxler), but no cohesive team plan at all. It’s not a good scene, man.

Can they do it again? They’ve already beaten Real Madrid in La Liga. (We’ll get to that team’s issues in a minute.) They’ve replaced Diego Costa (last seen feasting on Premier League defenders for Chelsea) with Bayern castoff Mario Mandzukic, who has already scored the winning goal for Atlético against Real Madrid in Spain’s preseason Supercopa. (Yes, if you are keeping score at home, Atlético and Real have already played three times, with Atlético winning twice.) This is a team that won its league last season, reached the finals of the Champions League, and shows no signs of slowing down.

Real Madrid won last season’s Champions League and then promptly sold every midfielder who did even a lick of defending (except for Sami Khedira, who, outside of about three World Cup matches, hasn’t been healthy in more than a year). Madrid’s manager, Carlo Ancelotti, has to figure out a way to put some steel in a midfield of James Rodríguez, Luka Modric, and Toni Kroos. Those three, behind the BBC behemoth of Gareth Bale, Karim Benzema, and Cristiano Ronaldo make for possibly the most vicious attack in the world. But you need the ball to attack. And given that they’ve already lost to Atlético Madrid in the league and coughed up a two-goal lead at Real Sociedad, to lose 4-2, they are having a bit of a problem with the whole “get the ball back” thing. This is what happens when you treat your real-life superclub like a 15-year-old playing FIFA.

Nothing to See Here, Move Along: Barcelona

Barcelona have quietly had a good start to the season. Forget that Neymar is still playing his way back into form, after injury, and Luis Suárez has yet to take the field. Everything is going swimmingly, thank you very much.

Youth products Munir El Haddadi and Rafinha have stepped in on the wings. Newcomer Ivan Rakitic looks more comfortable in midfield than Cesc Fàbregas ever did. And Lionel Messi is back to somewhere close to peak Messi. Just look at this assist to Neymar.

Bilbao had to beat Napoli in the preliminary rounds just to make the group stage. That might help to explain why they sloppily dropped a game, early in the season, to Málaga. They’re on a disappointing three-points-from-three-games run in La Liga. Still, the all-Basque team is young and entertaining. The club’s policy is to recruit and develop only local Basque talent, which makes their constant competitiveness that much more impressive. In recent years, they’ve lost Ander Herrera, Fernando Llorente, and Javi Martínez to Manchester United, Juventus, and Bayern Munich, respectively. Yet they still managed to climb up the La Liga table. Drawn into a group with Porto, Shaktar Donetsk, and the Dr. Seuss–sounding BATE Borisov from Belarus, Bilbao have a pretty easy draw and could be a frisky knockout-round underdog.

Juventus lost one of the best young coaches in the world in Antonio Conte when he walked out on the club, just weeks before the season. His replacement, Massimiliano Allegri, has a very good reputation in Italy, mostly because he didn’t complain as AC Milan’s roster was sold out from under him. The team is still intact, with stars Paul Pogba and Arturo Vidal remaining on board, and Andrea Pirlo (whom Allegri let leave Milan in the first place) aging in his fine-wine way. The question is: Can they correct the disappointing Champions League performances of the last few years, which dampened their unrivaled dominance of Serie A?

Roma are an entertaining team. They have the ageless Francesco Totti, who has perfected the trick of not being able to move around a soccer field, and having it not matter. They have the real Gervinho (as opposed to whoever that impostor was that labored away so comically for Arsenal), a pair of young attackers in Miralem Pjanic and Adem Ljajic, and Italian midfield stalwart Daniele de Rossi, whom we’ve all totally decided to forgive for destroying Brian McBride’s face in 2006. Not to mention Ashley Cole, standing comically in roughly the same zip code as his teammates. The problem with this fun side is that they happen to be in the same group as Bayern Munich and Manchester City. So, something’s got to give.

They lost to Bilbao last round, so manager Rafa Benítez doesn’t get any Champions League joy. This apparently delights Jose Mourinho.

Ligue 1 is not particularly competitive, compared with the other top European leagues. But PSG have at least spent, if not earned, the right to get discussed as a contender. It’s impossible to really get a grasp of how good PSG are, before Champions League starts, because, quite frankly, they just don’t play anybody good enough in France to test them. That they’ve drawn three of their first five games is a little worrying, though. Then again, they have Zlatan. Don’t touch Zlatan.