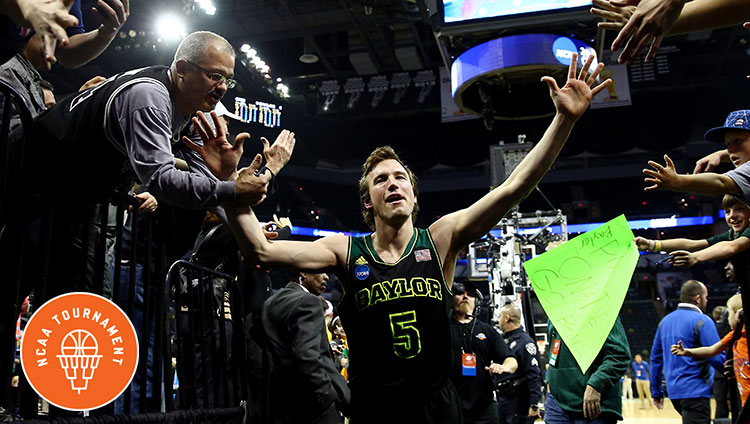 My bracket might be busted, but at least I’m perfect with every* tournament prediction I’ve made so far! Let’s take a look at my five predictions for the opening night of the Sweet 16.

A coach will get a tech

Now that we’re in the Sweet 16 and coaches can taste the Final Four, one of them is going to crack under the pressure. Think about what must be going through the minds of tonight’s coaches. Steve Alford and Bo Ryan have been told for years that they can’t win in the tournament. Scott Drew is the butt of many college basketball fans’ jokes for failing to lead his talent-laden rosters deep into March. Stanford’s Johnny Dawkins was fighting for his job a month ago and probably wants nothing more than to stick it to his doubters with a Final Four trip. Sean and Archie Miller have the brother rivalry going on. If Sean’s Arizona team loses and Archie’s Dayton squad wins, Sean has to live with knowing he had one of the best teams in the country and his brother still got further than him. If Archie loses and Sean wins, Archie has to live with the knowledge that he was a win over a 10-seed away from joining his brother in the Elite Eight. 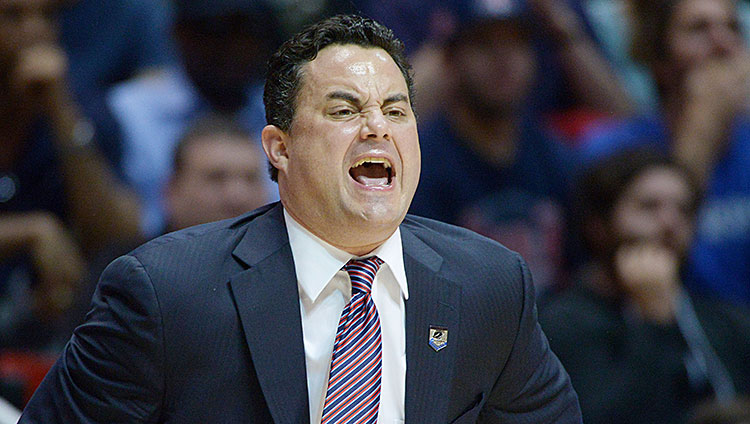 Meanwhile, for every three people who pat Steve Fisher on the back for turning San Diego State into one of the best programs on the West Coast, one person points out that he hasn’t been to the Elite Eight since 1994. Billy Donovan doesn’t have much to worry about because he’s already got two titles, but you have to think there’s still pressure associated with being the no. 1 overall seed. Throw all that together, add a couple of close games, and sprinkle in millions of people watching, and suddenly we’re one bad call away from one of these coaches blowing his top.

Wisconsin-Baylor will be the game of the night

If you bet anything more than five bucks on the outcome of this game, please visit Gamblers Anonymous, find the hotline number for the state you live in, and get help immediately because you’ve hit rock bottom. I mean, if I fell asleep right now and didn’t hear about what happened in this game until tomorrow, I’m not sure there’s anything that would surprise me.

“Wisconsin played zero defense; Baylor kept its hot shooting from the Creighton game going; the Buzzcuts couldn’t score against Baylor’s zone; Baylor obliterated Wisconsin on the boards; and the Bears won by 25. There’s a reason Scott Drew is 8-3 in the tournament and Bo Ryan is 0-3 in his last three trips to the Sweet 16.”

“Wisconsin diced up Baylor’s zone, so the Bears went man-to-man. But then Frank Kaminsky and Sam Dekker ran circles around Isaiah Austin and Cory Jefferson. Baylor’s size was a problem for Wisconsin’s defense, but the Buzzcuts could get any shot they wanted. Baylor wasn’t hitting 3s like it did against Creighton, and Wisconsin ran away with the game. It was over with 10 minutes left.”

“Brady Heslip ran out of the gel he uses to part his hair and refused to come out of the locker room until a manager found him some. Frank Kaminsky tried to play in glasses to taunt Isaiah Austin for being blind in one eye. Unfortunately for Wisconsin, Kaminsky accidentally got glasses with transition lenses and couldn’t see when the arena’s bright lights turned them into sunglasses. Every time Rico Gathers was on the court and saw a camera, he stopped playing and posed for it. Ted Valentine reffed the game and kept insisting that he had to ‘go to the monitor,’ which was just an excuse for him to look at himself. The last time he did this was three hours ago. The game is still going on because everybody is scared to tell Valentine to get back on the court.”

Scottie Wilbekin vs. Kyle Anderson will be the matchup of the night

Im paul blart mane all i do is mall cop

This is assuming they guard each other, of course. Wilbekin is a phenomenal defender, but he’s also just 6-foot-2 and 176 pounds while Anderson is 6-foot-9 and 230 pounds. Some teams have tried putting their point guards on Anderson for an entire game, and some teams have failed miserably. But then again, some teams don’t have Scottie Wilbekin. As a reference, here are the probable starters for Florida and UCLA:

Donovan has two more national championships than I have, so I’m sure he doesn’t need my help. But looking at that, assuming the Gators don’t play zone, it seems like a no-brainer to put Prather (a great defender in his own right) on Anderson and let Wilbekin guard Adams, who is UCLA’s leading scorer. Whatever happens, here’s what I know: Anderson is a mismatch nightmare for Florida because he’s guaranteed to be bigger than anybody the Gators throw at him (unless Donovan gets bold and puts Yeguette on Anderson and Prather on one of the Wear twins). And Wilbekin is a mismatch nightmare for UCLA because he has a quicker first step than anybody the Bruins are going to throw at him. We’re in for a treat.

A 1-seed will lose 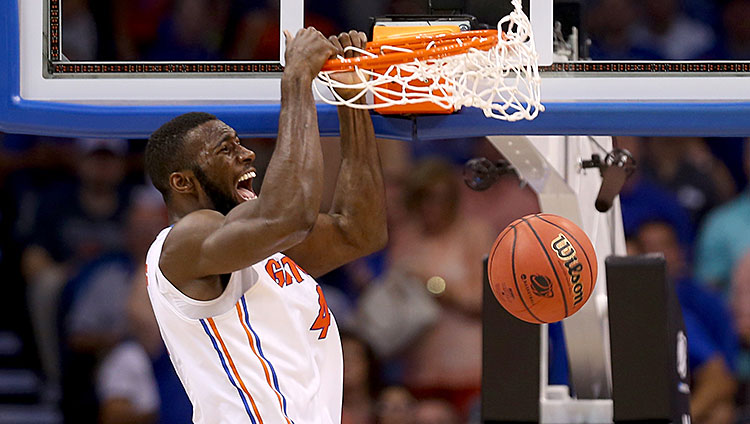 I really hope I’m wrong here. I’ve been dreaming of a Florida-Arizona national championship for months. But here’s why I think I won’t be: UCLA is on fire right now. The Bruins have beaten five NCAA tournament teams in their last five games, two of which are in the Sweet 16 (Arizona and Stanford). Florida has been great all season and the Gators have also recently beaten two Sweet 16 teams (Kentucky and Tennessee). But anybody who saw the three-game stretch of Tennessee, Kentucky, and Albany knows the Gators are far from the dominant force you’d expect a no. 1 overall seed to be.

Florida’s bread-and-butter is its defense, but UCLA’s offense has the weapons to defeat it. Anderson is a real problem, and Florida will be forced to work hard to neutralize him. Anderson alone might not be enough to top the Gators, but when you add Adams’s 17.4 points per game, Powell’s 11.5 points per game, and the versatility of the Wear twins, the Gators will have their hands full. If the Bruins can find success against Florida’s defense, they’ll force a Gator team that is susceptible to scoring droughts to keep up with them, and there’s no telling how that might turn out. Maybe UCLA doesn’t pull out the win, but the signs point to this being a great game, and the Bruins could be a bounce or two away from ending Florida’s 28-game winning streak just a few days after they ended Stephen F. Austin’s 29-game winning streak.

On the other side of the bracket, Arizona–San Diego State has the biggest spread of all the Sweet 16 games, with the Wildcats favored by 7.5 points. Given the way these two play defense and how often they have offensive droughts, 7.5 might be closer to the over/under than the spread. I expect a better game than Vegas does since I expect San Diego State, which lost to Arizona earlier in the season, to have a mental advantage in the rematch. This might sound counterintuitive but think about it. Won’t Arizona enter this game thinking, Just do what we did the first time and we’ll be fine? Meanwhile, the Aztecs have the “nobody believes in us” mojo going for them; they have confidence from playing Arizona well without Dwayne Polee; and they know exactly what to expect from the Cats. That last part could be important. After all, Arizona was 10-0 this season against NCAA tournament teams the first time it played them, but just 2-3 against tournament teams the second time. Maybe that signifies a trend, and maybe it’s meaningless. There’s no way to tell. But this is for sure: San Diego State isn’t even a little scared, it has two players in Polee and Xavier Thames who can pour in points, it plays lockdown defense, and it’s in a do-or-die situation with nothing to lose.

You will feel sorry for Morgan Miller by night’s end

The wife of Dayton coach Archie Miller got a little camera time at the end of the Flyers’ upset of Syracuse last week, and the Internet reacted exactly how you’d expect the Internet to react. The scary thing, though, is that she was only onscreen for 5-10 seconds. Now that the secret is out and CBS is guaranteed to cut to her in the stands somewhere between 4,000 and 7,000 times tonight, the pack of rabid dogs known as the Internet is licking its sleazy, collective chops. This is why we can’t have nice things.