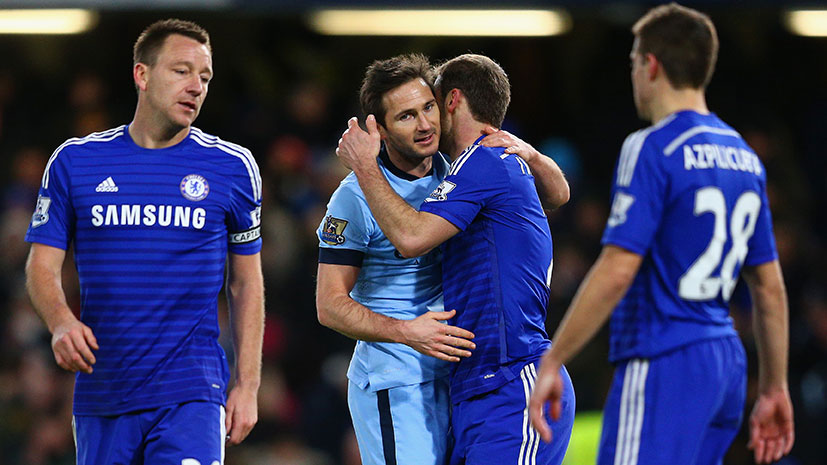 Some one-versus-two matchups become instant classics — like, say, that kind of important football game you watched yesterday — while others involve José Mourinho. Saturday’s game between first-place Chelsea and second-place Manchester City game featured two first-half goals … and then a cagey second half bereft of good opportunities. In total, Stamford Bridge saw only 12 total shots taken on the day, despite both teams averaging over 15 on the season. Why did so little happen in a game that featured so many great players? Well, much of it has to do with the inherently mismatched set of incentives the two teams had. Chelsea came into the game with a five-point lead in the title race, so a draw leaves them in pretty good shape. The impetus to push for a win should have been on City.

Mourinho may be the most practical manager in the Premier League. If he’s incentivized to go out and win, as he is most weeks, he’ll go out and do that. If he’s incentivized, as he was this weekend, to keep his opponent from winning, well, he’ll do that, too. Or, as Manchester City manager Manuel Pellegrini put it: “We played a very good game, there was one team that wanted to win from the beginning.” That’s a tried-and-true managerial mind-game, and it’s one that all managers, even (especially) Mourinho, engage in. When you need a draw, you play like it; when your opponent needs a draw, you blame him for not playing like he needs a win. 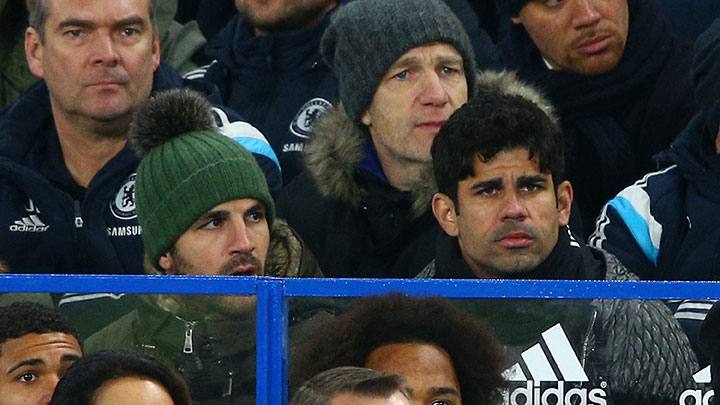 Now, Chelsea did play a defense-first game. Without Cesc Fàbregas and Diego Costa, two of their three most most important attacking players, the Blues registered just three total shots. In fact, their 41st-minute goal — a beautiful first-time low cross from Eden Hazard to Loïc Rémy, was the last shot Chelsea took. Mourinho’s side was happy to sit, wait, and counterattack if the situation arose — and if it didn’t, well, that was fine, because the clock runs out after 90 minutes.

Despite everything Pellegrini said about only one team trying to win from beginning to end, it’s unclear how he hoped his team would be the one to achieve that. At right back, he started Bacary Sagna, a much less dangerous attacking threat than first choice Pablo Zabaleta, to provide better cover to track Hazard. That’s certainly not a bad decision — Hazard is frightening — but it’s also a concession that in order to not lose, you have to stop Chelsea from scoring. Pellegrini also went with Sergio Agüero as a lone striker, as he frequently has this year. Again, it’s an easily defensible position, and realistically, David Silva or even James Milner often step up into the second-striker role for long stretches. On the goal, in fact, both Milner and Silva are in more advanced positions than Agüero before Jesús Navas’s cross comes to the forward to lash a shot toward goal and be deflected in by Silva.

In other words, the lineup is fine and completely sane, but it’s certainly not the all-out attack it could have been. The same is true of Pellegrini’s substitutes. He didn’t make a change until the 70th minute, and when he finally did, it was Frank Lampard for Fernando, followed by Edin Dzeko for Agüero in the 84th, and then Stevan Jovetic for David Silva in the 90th. Each of those moves was basically a straight replacement, none changing the shape or impetus of the formation.

Again, all of that would be fine … if City were truly bullying Chelsea, attacking in wave after wave, peppering Thibaut Courtois with shot after shot. But they weren’t. Mourinho’s defense gave up a grand total of one shot in the final 20 minutes, and it looked like this:

Pellegrini attributed that, too, to Chelsea’s approach. And it’s certainly true Man City played the last stretch of the game in Chelsea’s half. Man City had tons of possession during that period, and they completely dominated the ball. 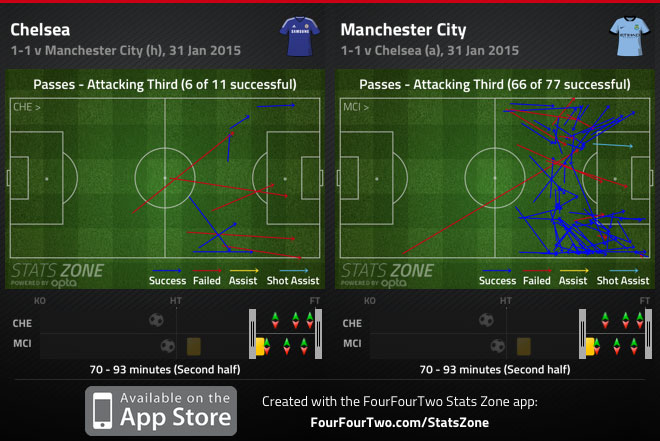 But, thanks in large part to Chelsea’s stout defense, Manchester City weren’t able to turn any of that copious possession into shots, let alone goals. The more you parse it out, the faster Pellegrini’s logic unravels, because here’s the thing: City could have been more aggressive. When Pellegrini claims his team was trying to create chances and win against the evil, boring Chelsea, he’s leaving out a critical point: He had to do all of that without leaving his team exposed to a classic Chelsea counterattack.

In this sense, the two sides were a perfect mirror image: Chelsea were happy to defend and wait for the opportunity to exploit an overaggressive attack, while City were happy to attack, just not aggressively enough that they’d ever give up a counter. Ultimately, neither side blinked and gave in. For Chelsea, that makes perfect sense, as they still have a five-point lead and don’t play City again for the rest of the season. For City, the wisdom of the approach is less clear. Pellegrini said after the game he still believes his team can make up the five points between them and the leaders. If they don’t, he might look back at this game, wondering which team really left the most points on the table.

The Agony of Repeat: Old Foes Meet Again at the Australian Open — With the Same Crushing Results