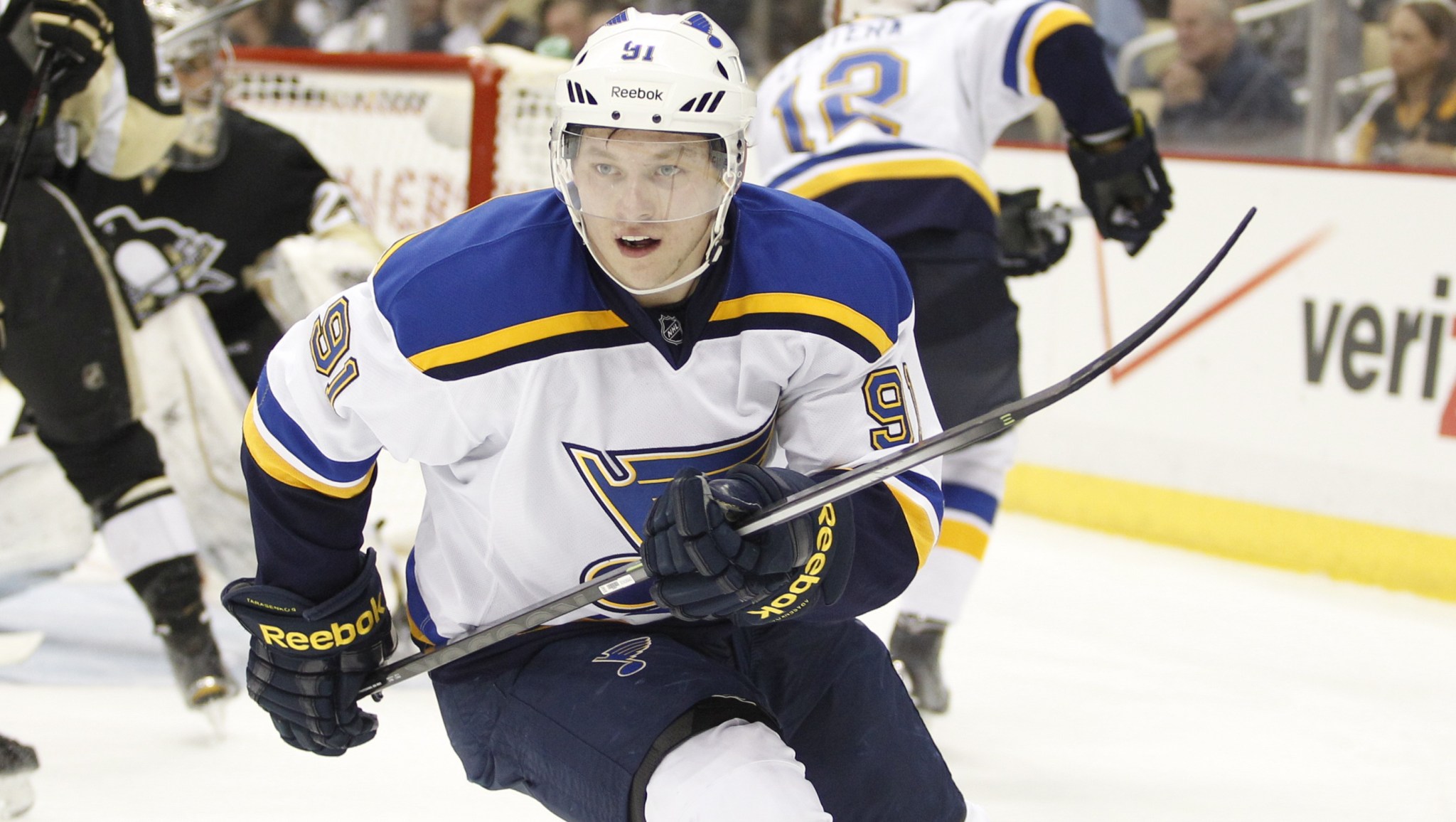 There’s always one. Every summer, as we all get settled into the NHL offseason doldrums, there’s always one young superstar who drops a midsummer contract bomb on our sleepy little hockey hamlet.

Last year it was P.K. Subban. This year, it’s Vladimir Tarasenko.1 The Blues winger just signed a massive extension, one that largely redefines the market for young players.

What does it all mean? Let’s figure it out.

The St. Louis Blues announced the signing of Vladimir Tarasenko to an eight-year, $60 million contract. The deal carries a cap hit of $7.5 million, making Tarasenko the Blues’ highest-paid player in terms of average annual value.2

The deal comes on the heels of a breakout season in which he scored 37 goals and recorded 73 points in 77 games, good for tenth in overall league scoring. He had been a restricted free agent, meaning he was free to sign an offer sheet with any team. Instead, the Blues locked him up for eight years, which is the maximum allowable contract length under the current CBA.

It’s a lot. The annual cap hit will be among the top 20 in the league, and makes Tarasenko the seventh-highest-paid winger in the game.

More importantly, the deal is almost unprecedented, in that it’s only Tarasenko’s second NHL contract. After just three seasons in the league, he was still years away from reaching unrestricted free agency. Similar deals to players like Phil Kessel or Corey Perry came with UFA status looming, giving the players leverage to demand a big deal or walk away and hit the open market. Players in Tarasenko’s situation have typically had to settle for signing a bridge deal before going long-term; we’ve never seen a player this young get this much money.

This is a question that’s often asked by hockey fans who are relatively new to following contract negotiations; these days, it’s also one asked by smirking player agents, feigning confusion while getting ready to shake a GM upside down and collect all the money that falls out.

When the NHL entered the salary cap era, the players agreed to accept restrictive rules around entry-level contracts that basically guaranteed that teams would get to keep young players for the first three years of their career at a very cheap price point, typically under $1 million annually.3 In return, the players got earlier access to unrestricted free agency, which meant they could hit their big payday as soon as seven years into their NHL career.

That left at least a four-year gap between the entry-level deal and UFA status, during which players could become restricted free agents and qualify for arbitration rights. For all intents and purposes, the player was still under team control, meaning he had to negotiate his second (and sometimes third and fourth) pro contract without having much leverage beyond being willing to sit out.

Enter the concept of the “bridge deal,” which is pretty much what it sounds like: a meet-in-the-middle contract that would take a player from ELC to UFA, giving him a nice raise on his entry-level salary while still dangling the carrot of a bigger payday down the road. The deals came to be viewed as a sort of “prove it” contract — you want to hit the jackpot, kid? Show us what you’ve got.

That sounds reasonable. Why shouldn’t players like Tarasenko have to prove their worth?

Bridge deals have been falling out of favor in recent years, with good young players often skipping the “prove it” phase and going straight to hitting the jackpot. The deals aren’t extinct — Evgeny Kuznetsov signed one just a few days ago — but they’re no longer a mandatory step toward a future big payday.

That’s been a frustrating development for lots of hockey people, especially those in front offices around the league who can no longer rely on below-market deals for young stars to keep their caps manageable. But there are good arguments against bridge deals. For one, they can backfire on the team that signs them; that’s essentially what happened to the Habs with Subban, who signed a “prove it” deal and then went out and proved it so decisively that he became the league’s highest-paid defenseman.

But beyond that, there’s a good case to be made that guys like Tarasenko deserve to get their big money now. He’s 23 years old, which means he’s already in his prime as an offensive player. Every player is different and nobody has a crystal ball, but history tells us there’s a good chance that Tarasenko’s next few years will be the most productive of his entire career. It doesn’t make much sense to expect a player to serve those years at a discount, and then turn around and get his biggest contract at 27 or 28, when he may already be in decline. That may be the way we’ve always done it, but it doesn’t make it smart for players or the teams paying them.

You mentioned offer sheets. If Tarasenko’s so good, why didn’t anyone sign him to one?

The short answer: Because this is the NHL, and nobody uses offer sheets any more.

The longer answer, as we tackled a bit on Monday, is that offer sheets almost never work. Only one player in the last 17 years has signed an offer sheet that wasn’t matched, and that was Dustin Penner — a useful player, but nobody’s idea of a superstar.4 In every other case, no matter how insane the contract, the original team has always matched. If the team doesn’t think it’ll be able to match, it works out a trade in advance of the offer sheet coming down — and usually not with the team that was going to sign it.

There’s more to it than that, and at least some of this is still based on the NHL being an old boys’ club where most GMs are reluctant to go out of their way to make trouble for their colleagues. But the reality is that the Blues were going to match any offer sheet Tarasenko got, and there weren’t any teams out there willing to waste their time on what would have wound up being a futile gesture.

So back to that $60 million … is Tarasenko actually worth it?

That’s the big question, and we don’t have all that much to go on. Tarasenko is a former first-round pick who had success in the KHL as a 20- and 21-year-old, so he’s got the pedigree. He’s also got just two and a half NHL seasons under his belt, only one of which was especially impressive. That’s not a red flag — other than the Crosbys and Ovechkins of the world, virtually nobody comes into the league already firing on all-star cylinders. But it’s still true that Tarasenko only has one year of truly elite play on his résumé.

The flip side: That one year was one hell of a year — a top-10 scoring year that you started as a 22-year-old is flat-out impressive. And beyond the numbers, Tarasenko has shown a level of skill that only a handful of NHL players can match. His highlight reel is ridiculous. And again, he’s at the age that history tells us is just entering his prime. If last year was his true talent level, he should be able to maintain it for years, maybe even for the majority of this contract.

So yeah, it sure sounds like he’s worth it. What’s more, there’s at least the possibility that he’s more than worth it. If Tarasenko can improve on last year and become a consistent 40-goal, 80- or 90-point player, that $7.5 million cap hit is going to start to look like a bargain pretty quickly.

So this is a great deal for the Blues then?

Well … probably. Very likely, sure. Almost definitely. That’s pretty much been the consensus in the immediate aftermath of the deal. And it’s hard to argue with — Tarasenko is one of the best young players in the league, and the odds of him living up to this deal and maybe more seem excellent.

But it’s no sure thing, and that’s where the risk factor kicks in for the Blues. We’ve seen players come into the league, look like world-beaters for a year or two, and then come back to earth, or get lazy, or get hurt. And since Tarasenko will be 31 by the end of the deal, there’s the possibility that he follows a Dany Heatley–type aging curve and makes at least the tail end of the deal look bad.

But you could say that for just about every max-length contract signed in the NHL, and Tarasenko’s seems far less risky than just about any of them because he’s still so young. A deal doesn’t have to be no-risk to make sense for the team that signs it — they just need to have the odds on their side. And the Blues almost certainly do.

Could they get burned? Sure. But they could have also been burned by getting cute on a short-term bridge deal, especially if Tarasenko put up another couple of seasons like last year. These big extensions always come with some serious sticker shock, and it usually ends up being misplaced. Teams have to weigh the risks when they commit to players, and this contract seems like a smart bet.

Where does this leave the Blues for the rest of the offseason?

The bad news: The Blues are down to just $2.4 million in cap space, the fourth-smallest total on the league. The good news: They’ve pretty much signed everyone they need to sign. There’s still the possibility of a trade or a bargain big free agent or two, and they still haven’t decided what ridiculous thing they’re going to do with their goaltending this year, but for the most part the headline-news portion of the Blues’ offseason is likely over.

Who’s the next RFA to strike it rich?

There are still plenty of RFAs left, although few have anywhere near the star power of Tarasenko. Three in particular are worth watching, all of whom have filed for salary arbitration.5

Detroit’s Gustav Nyquist is almost a poor man’s Tarasenko. He’s two years older and had put up similar numbers heading into last season. While Tarasenko exploded, Nyquist at best merely improved, putting up a career-high 54 points. That’s not bad, but you wonder if the Red Wings feel like they really know what they have quite yet. This could be a spot where one of those classic bridge deals makes sense for both sides.

Rangers center Derek Stepan is in line for a big raise over last year’s $3 million cap hit. New York had been hoping to keep him at a cost of roughly twice that, but a tight cap situation and the enormous deal just signed by the somewhat comparable Ryan O’Reilly will leave them in a very tough spot. They’ll probably find a way to get him re-signed, but a trade, once unthinkable, is starting to look like a possibility here.

And then there’s the biggest name of all: Washington goalie Braden Holtby. If any RFA is in position to get close to Tarasenko’s windfall, it’s Holtby, who seems to be on the verge of ascending to the NHL’s top tier of goaltenders alongside guys like Carey Price and Henrik Lundqvist. Goalie contracts are always tricky, and long-term deals for anyone but the very best almost always end in disaster. But Holtby can make a strong claim to being in that very best category, and the Caps are rumored to be close to reaching a deal with him.

So with that taken care of, what do we do for the rest of the summer?

I say we all sit here and stare at Steven Stamkos until he finally signs a $90 million–plus extension with the Lightning. No pressure, Steven.