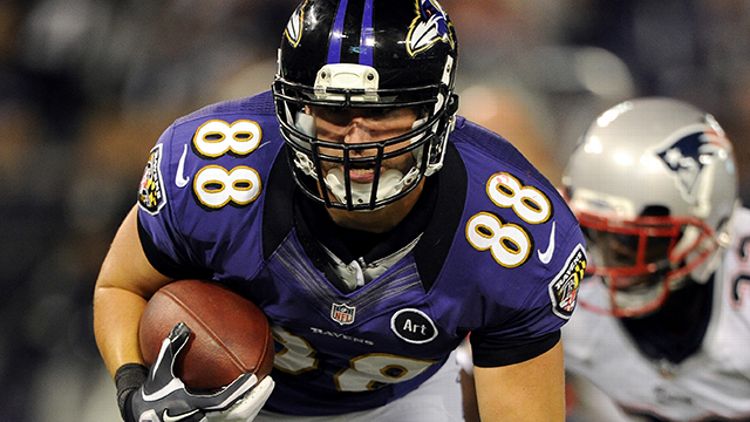 Are you a devoted fan of a professional football team located in a notoriously hardscrabble city on the East Coast? If so, Saturday really wasn’t very much fun for you. In a matter of hours, Ravens tight end Dennis Pitta and Eagles wide receiver Jeremy Maclin suffered injuries that will likely sideline them for the entire 2013 season. Every NFL team goes through some level of attrition during training camp, but it must feel awful to lose a key player within a few days of getting together and hunkering down for the months ahead. Both Baltimore and Philadelphia will find it difficult to replace their sidelined receiver, but these two players have each lost an opportunity they might never get the chance to replace.

The Pitta injury is the more serious and perhaps more impactful of the two. Details were scarce at first when Pitta was carted off the field after a collision with safety James Ihedigbo, but it was eventually revealed that Pitta had a dislocated hip that would keep him out for six to eight weeks. Shortly thereafter, it was reported that Pitta had actually also fractured his hip and undergone surgery that would keep him out for the remainder of the season. Mention hips with regard to football players and I start thinking of guys like Bo Jackson, who dislocated his hip and suffered a small fracture that eventually led to avascular necrosis, which ended his football career and shortened his baseball career. That’s the danger with Pitta’s injury, for which getting the fracture to heal might be the easy part. Over the next year, Pitta has to avoid complications and, in the future, hope that the dislocation doesn’t become chronic. It’s not an injury guaranteed to shorten his career, but one that makes the possibility of a short career more likely. That would be a shame: Pitta has become a very valuable part of the Baltimore offense and a versatile, entertaining player to watch.

The Ravens will have to maneuver a bit to replace Pitta. (On Sunday, Baltimore signed veteran free agent Visanthe Shiancoe.) They will ask for Ed Dickson, nominally the blocking tight end in their two–tight end sets, to do more as a receiver. Where they’ll really miss Pitta is on third down, where he and the also-gone Anquan Boldin were Joe Flacco’s two favorite targets. During last year’s regular season and run to the Super Bowl, exactly half of Flacco’s third-down conversions (37 of 74) were on passes to Boldin or Pitta. Dickson only had four such catches. With Jacoby Jones also reporting to camp out of shape, the Baltimore receiving corps is suddenly an enormous question mark before the season even starts.

The Maclin injury is disappointing in a different way. The good news is that Maclin should be able to return from the injury for a second time; he tore his ACL before his freshman year at Missouri in 2006 and redshirted before posting a 1,055-yard season the following year. It’s distressing to see a player suffer the same injury to the same knee, but the previous injury happened seven years ago, so let’s hope that it doesn’t become a more chronic injury.

Riley Cooper will initially absorb Maclin’s snaps by moving into the starting lineup. At 6-foot-3, he fits the Chip Kelly mandate for big athletes, but he’s not anywhere near as talented of a receiver as Maclin was. The Eagles will also need somebody to pick up the third-wideout snaps that Cooper was likely to earn, with Jason Avant and former Tampa Bay receiver Arrelious Benn competing for that job. There’s not much available in veteran free agency, but Philadelphia could take a flyer on Brandon Lloyd, the recently released Donald Jones, or even Randy Moss. The Eagles were already likely to use two–tight end sets on a regular basis, but they could become even more frequent now with this injury.

What’s even more disappointing about these injuries is how it will affect these players’ futures. Both Maclin and Pitta were in the final year of their contracts and about to hit unrestricted free agency, where a healthy season would have earned them lucrative contracts with plenty of guaranteed money from either their current teams or a free-agent suitor. It’s not unreasonable to think that either of these players would have pocketed $15 million or so by this time next year.

Now, they’ll instead hit the market coming off major surgery and with no fresh game tape to show interested teams to prove their health. They’ll likely be forced to accept one-year deals with little (if any) guaranteed money, earning them a fraction of what they could have earned. The possibility also exists that they might never be able to “prove it” and earn that money in the future. With the limited life span and earnings time frame of an NFL player, that could very well mean the injuries suffered by Maclin (who rejected the idea of holding out as recently as Thursday) and Pitta could have cost them the only big contract they would ever have had the chance to sign. You don’t have to be an Eagles or Ravens fan to have a whole lot of sympathy for what those two men are going through right now, both physically and emotionally. Futures that seemed very clear on Friday are now entirely unclear, and that’s far more difficult to deal with than a team losing a receiver.