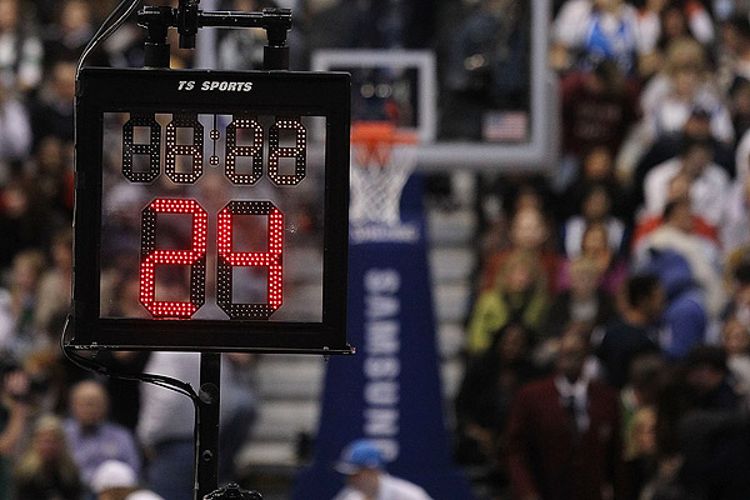 We are not all members of the Houston Rockets’ front office, those kind, statistical miners and Grantland contributors who are at the forefront of the NBA’s information age. They keep their secrets closely guarded. There is still a glimpse into the NBA’s future to be had and where it may be headed from the players, coaches, and fans’ perspectives.

Steve Hellmuth, the league’s executive vice president of operations and technology for NBA Entertainment, recently guided Grantland through some of the league’s recent technology advances. Hellmuth and a couple of basketball insiders offered the window into where the league may be headed now and in the next few years.

The Shot Clock
The sharp-eyed fan may already noticed this slight shift. The shot clock now reflects tenths of a second once it hits the five-second threshold. The change seems mild, but it can have a large effect on strategy and options. There is a big difference between what can be done in 1.1 seconds and 1.9 seconds. The NBA debated projecting tenths for the entire 24-second shot clock and at 10 seconds before debuting the tenths at five seconds this season. “It gives a precise number to the coaches and to the players,” Hellmuth says. “They know it’s 1.2 or they know it’s six-tenths of a second. They know exactly what they’re dealing with if a timeout is called or if the clock is stopped for some reason.”

SportVU player-tracking technology from STATS
This technology has been out there for a couple of years, and its full potential is still being harnessed. Nine teams — Boston, Golden State, Houston, Milwaukee, Minnesota, Oklahoma City, Toronto, San Antonio, and Washington — now have the six small cameras distributed in their arenas. The cameras are calibrated and measure players in x and y coordinates and designate the ball as z. The possibilities for mining statistical data are nearly endless: the speed of a pass, the arc of a shot, a player’s acceleration and deceleration, how much he actually runs during a game to allow for personalized recovery programs. The technology allows the statistics to be delivered in-game this year, rather than teams having to wait for it after games, when it may no longer be as relevant.

Which brings us to the next advancement and debate …

Tablets on the Sideline
A coach needs to show his team a play to be on the watch for during a timeout. Instead of using an erase board, he uses a tablet to play video of the specified play. The league may not be far off from this point. Teams are currently allowed to use tablets and laptops at courtside, Hellmuth says, but are prohibited from using video from that game’s feed.

“It’s really a basketball operations question as to whether or not they can use video at courtside,” Hellmuth says. “There’s lots of things that would have to align to make that happen. If they were to use video from in-game, then we’d have to go through it with [NBA executive vice president of basketball operations] Stu [Jackson] and make sure that every team had universal access to every video that they needed, that their cable into courtside was correct and that if one team lost their video feed to courtside, I’d have to be in a position to have somebody take it away from the other team, so there wouldn’t be an unfair competitive advantage. There’s lots of stuff that has to go into the thinking around allowing video at courtside. That thinking is all going to happen in the basketball operations side of the house, and I’ll be ready to work for them on the technology.”

Advanced Metrics
Players are not the only ones being assessed on newfound statistics. There are whispers around the league that a few teams have started using advanced metrics to study the tendency of referees. Some organizations also utilize the metrics in the hiring of their coaches. The organization can view the prospective coach’s win-loss performance with a stable starting five or his record against an in-division opponent, for example.

4K Television
Here’s a quick fact, according to Hellmuth: The NBA participated in one of the first high-definition broadcasts — the 1991 All-Star Game in Charlotte — and sent the feed to Japan. “It was shot on an analog version HD,” Hellmuth says. “Frankly, I don’t even know if I could play the tapes back today.”

The involvement is comparable to the league’s early participation in 4K resolution, which has 4,000 lines of pixels (compared with 1,080 for high-definition television). “They shot an NBA game last year at the Nets and you can actually see the NBA in high vision,” Hellmuth says. “The detail is just spectacular. Everything is readable. It’s really almost better than sitting in the stands because you have no problem with distant vision. It’s just all right there for you.”

“We were early active proponents of HD, via NBA TV as well. The biggest thing in the launch from SD to HD, to me, is that Michael Jordan played in the standard definition era. If you go back and watch his games in standard definition, what you can’t see is him playing defense. It’s just lost because the picture isn’t wide enough or detailed enough and because the directors were very focused on the action. It’s really kind of a big loss. Whereas today in the HD world, you can choose to watch players play defense, which is what I did every time I went to a game, a live game. And then 4K is going to even extend beyond that.”

But don’t get rid of your high-definition television just yet.

“NHK [Japan Broadcasting Corporation] has it on a timeline that says it will be implemented in 12 years, but over the next five or six years it will start getting spot implementation,” Hellmuth says. “As the monitors get bigger and bigger in people’s living rooms and they become more affordable, there will be a desire for more pixels and a better-looking picture. But it’s an entire contribution change that needs to be switched, from cameras and mobile units to transmission capabilities, all the way to and transmissions to the home. The full transition to HD is only just completed. It took a while.”

Cashless Arenas
The NBA may look to mimic England’s Ricoh Arena by having everything you need already brought and purchased on your ticket. “We just think it would be a hell of a lot more convenient for the fan to transport his or her tickets to the arena and then to, especially if they’re a guest of a corporation or a small company, to have that bar code also loaded with hospitality and drinks and food as well,” Hellmuth says.” It’s a real incentive to give people that complete package and speed their way through lines or whatever they’re waiting for.”

Facebook
“What I know I’d like and we’re talking to Facebook about is, you walk into an arena and check in and it immediately tells you which of your friends are also there and then an app that would give you the ability to blast a message to them — ‘Why don’t we all meet behind section 102 at halftime?’ I think that’s something that we’re really going to look at.”

The technology, of course, can have its drawbacks. The Cleveland Cavaliers waived Manny Harris in December, a move that is believed to be attributed to the freezer burn obtained from visiting a cooling chamber designed to accelerate recovery. And instead of a baseball manager complaining about a faulty phone line, we could have a coach blaming a stalled tablet when the game is on the line. So take those advances with cautions, fans, coaches, and players alike.