Look on the Bright Side: Reasons for Arsenal, Everton, Tottenham, and Man United to Be Optimistic 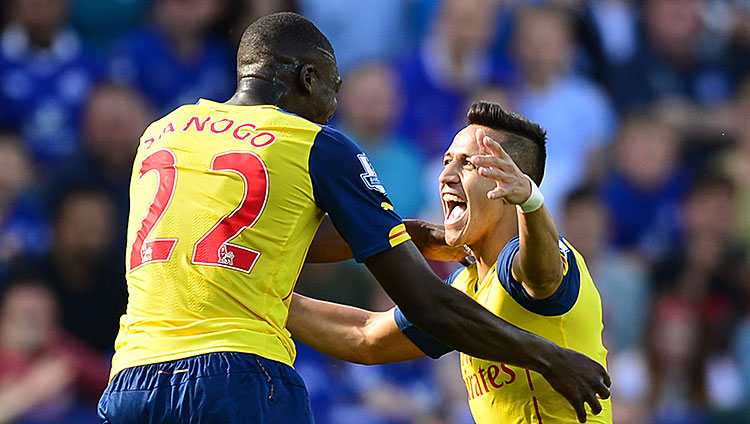 It was a weekend that will be known throughout the ages as “Black Match Day 3.” That’s provided we define “the ages” as “the next two weeks,” as the world suffers through the most pointless FIFA international break of the Word Cup cycle.

A month from now, nobody will remember the points dropped by a bevy of teams this weekend. But for the next two weeks, it’s going to feel like the end is nigh. This is not the end, though. It’s just the suspended animation of a two-week international break. And even for those teams in the darkest of places, there are reasons for optimism. Here are reasons for all the teams that dropped points this week to feel good about themselves.

I’m not going to sugarcoat this, Arsenal fans. You had one true striker, and he broke his foot. But even without Olivier Giroud, and with Bambi on Ice Sanogo leading the line, Arsenal, you finally outshot a team. By a lot. Leicester City might turn out to be awful (though I doubt it; I believe in the Lesters), it might be a natural result of chasing three points for the entire second half, but this shot chart is nothing to lose sleep over. 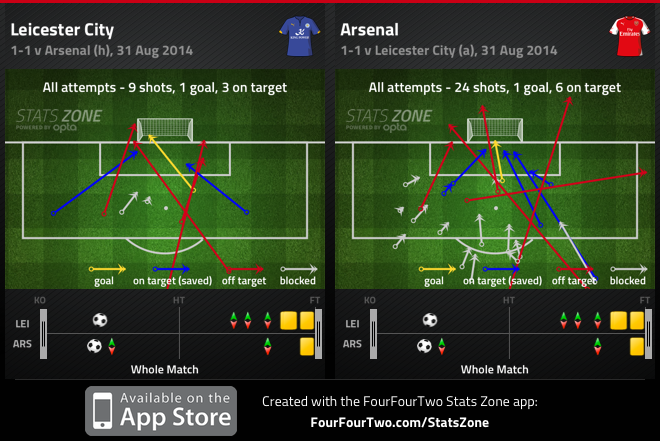 If Arsenal keep doing that, they’ll be fine. Consider this some cosmic payback for all the times Arsène Wenger’s passers have put up mediocre shot totals and still snuck out wins. Getting 24 shots and holding your opponent to nine is a recipe for success. Even if those shots come without an ambulatory striker.

There are no long-term lessons to be learned from a game as acid-trippingly insane as Everton’s 6-3 loss to Chelsea. The Toffees were down two goals in three minutes, and manager Roberto Martínez was rightly aggrieved at a linesman for missing an offside call on the second goal. That same linesman, though, would go on to miss American hero Tim Howard clearly handle the ball outside the box. Eventually Everton clawed back to 2-1, before halftime.

That was the sane half.

Sometimes a guy on Stoke runs 70 yards and pokes a ball by your keeper and you lose 1-0. It happens.

Good for Mame Biram Diouf. It’s very unusual for City to lose at home — it happened only once last season, and that was to Chelsea. But even the best teams have the occasional hiccup. Last season, for the first two months, the eventual champs couldn’t get out of their own way on the road. They lost away to Cardiff City and Aston Villa, and drew with Stoke. Stuff happens. Last season, stuff happened to Manchester City and they still won the title. With this roster, and coming only a week after a convincing win over Liverpool, more stuff has to happen before City bother worrying.

When Louis van Gaal joined Bayern Munich, in 2009, he took two points from his first three games, including a loss to a newly promoted side. Bayern went on to win the league and the domestic cup, and to reach the finals of the Champions League. That’s not to say you should put United’s name on any trophies, of course. It’s just to say that van Gaal has a history of starting off with underwhelming results and then bringing his teams together. Ángel Di María has arrived, and he was a lone bright spot for United against Burnley. Ander Herrera will eventually return to health, as will Luke Shaw. Eventually, Ashley Young will stop playing left wingback (or anywhere), and things will get better.

After a week that started with a hilarious 4-0 loss to League One’s MK Dons, and ended with an exceedingly dull 0-0 draw against Burnley, it can’t actually get any worse.

The nature of Tottenham is that every difficult loss calls to mind past tough defeats. A final score of 3-0 against Liverpool naturally brings up echoes of André Villas-Boas’s and Tim Sherwood’s sides getting throttled by the Reds. That obscures the point that Spurs didn’t play that badly on Sunday. Defensively, they weren’t particularly good, but nobody (except Manchester City) has been particularly good defensively against Liverpool when they play two strikers. Though someone on Spurs might want to mark the attacking full-back at some point:

Spurs went toe-to-toe with Liverpool. The game was effectively ended on a penalty call that was … marginal.

Spurs have already conceded two penalties this season, playing a third of a match down a man. And they still have six points. Tottenham seems to have an attacking blueprint that heavily features Érik Lamela and Christian Eriksen. That’s more than you can say for the last two managers the clubs has employed.