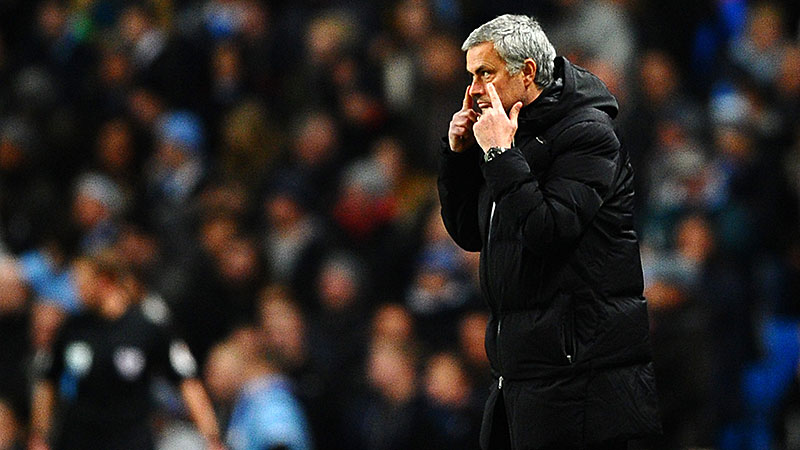 There are certain players playing certain roles on certain teams whose influence is incredibly hard to calculate. Then they miss a game, perhaps the team’s biggest game of the year. And while watching that game it becomes abundantly clear just how important they are. That’s why, despite all the action on the field last night in a surprisingly entertaining match between two of the three best teams in the Premier League, the most important player was the one who missed out to injury, Fernandinho.

Midfield control is one of those nebulous football concepts that’s difficult to define and almost impossible to measure (yet). I’ll try, anyway. Loosely it means how often a team does what it wants to do with the ball. It isn’t about completion percentage, or directionality, or even time of possession; it’s about the ability to execute a game plan, whatever that game plan happens to be. Not every team is interested in having control of the midfield, and not every team is interested in stopping opponents from controlling it. City are, and that control has been a huge key to their success.

A big part of what has made City so dominant this year is not just their control of the midfield, but their ability to do so with only two players centrally. Even against teams playing three central midfielders, Yaya Toure and Fernandinho were basically left alone to control the middle of the pitch. And even then, Toure was given license to roam forward, often leaving his Brazilian midfield partner on his own. When City moved from attacking to defending or defending to attacking, it was mostly Fernandinho’s responsibility to manage the transition.

Defensively, it was Fernandinho’s job to break up attacks before they happened, either by through actual interventions (tackles, interceptions, and ball recoveries) or through sound positioning (forcing other teams to slow the attack and allowing time for additional help to arrive from City’s defenders). He’s second on City in tackles at 2.5 per 90 minutes and leads the team in interceptions with 2.3 per 90. (All stats courtesy of ESPN Stats & Info.) 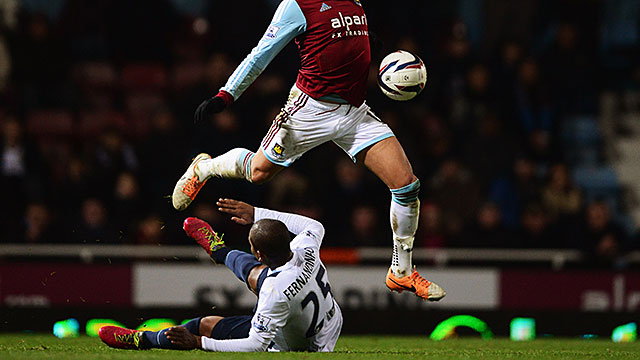 In attack, Fernandinho functioned (sometimes with Toure and sometimes alone) as the transition between the center backs and creative attackers like David Silva and Samir Nasri, receiving more passes from the defenders than anybody but Toure, and in turn funneling the ball to the creative attackers. When Toure went forward with the ball at his feet, it was often because Fernandhinho gave it to him in the space to do so. When Silva popped up in an unexpected pocket of space, the ball that found him frequently came from Fernandinho. It’s not glamorous or eye-catching, but it is critical.

City were without all of that yesterday against Chelsea, and adding injury to injury, Fernandinho’s natural replacement, Javi Garcia, was also hurt. City manager Manuel Pellegrini opted to go with Martin Demichelis in midfield. Demichelis is not a midfielder. At this point in his career Demichelis is barely even a central defender. For much of this season, he’s had trouble covering the space that being a defender in Pellegrini’s expansive system demands, let alone the more demanding role at the transitional hub. It wasn’t surprising then that he wasn’t up for the task, and it’s pretty puzzling that he played the whole 90 minutes, even if Pellegrini’s other options were limited to Jack Rodwell (who has played a grand total of 109 minutes this season) and James Milner (who is more a winger, although he did play centrally at times next to a more restrained Toure under Roberto Mancini).

Chelsea, for their part, aren’t particularly interested in controlling the midfield when they have the ball, at least not against top opposition. They are perfectly happy to wait for a swift counterattack or a set piece to provide goals. What they are interested in, however, is making sure their opponents don’t control the midfield. Mourinho is often criticized for being defensive, which is fair, and by extension, “parking the bus,” which, at least with this iteration of Chelsea, isn’t. Chelsea don’t station two banks of four defenders in front of goal; rather, it’s about breaking up the opposition’s play in midfield. Chelsea lead the league in tackles in the middle third of the pitch with 171, but are last in tackles in their own defensive third with only 153. So it’s easy to imagine the instructions that would have been given to midfielders Ramires, Nemanja Matic, and David Luiz had they faced Toure and Fernandinho. The mandate would have been don’t let them play, at any cost, and don’t worry about the attacking side of the game — just get the ball out to the wingers and let them work.

But faced with Toure and the ponytailed corpse of Demichelis, Matic and Luiz were more than enough to handle midfield duties, which left Ramires time and space to join the attack. He was able to get forward and get the ball in all sorts of dangerous areas, mainly on the right wing. 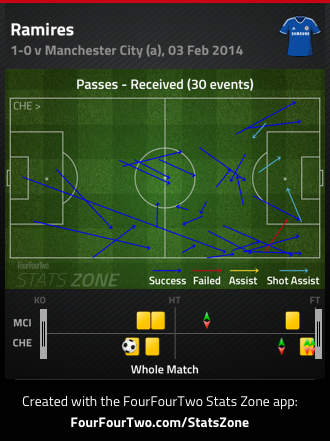 He also missed perhaps Chelsea’s best chance of the night when Joe Hart saved his effort in the box, after a beautiful four-on-one move quarterbacked by Willian (and started after Demichelis failed to recover the ball and prevent the counterattack). Ramires was then instrumental in Chelsea’s goal. It was the Brazilian who got to the center of the penalty area to take the shot that rebounded to Branislav Ivanovic, who surprisingly lashed it home with his left foot.

It’s easy to pinpoint what Chelsea did offensively; what they did defensively, though, is harder to pin down. City shot 25 times, their second-highest total this season behind the 27 shots they took while beating Norwich 7-0. Of those, 14 were from inside the penalty box, and only four were headers. So City had 10 shots with their feet in the penalty box and managed to get a grand total of one on target. 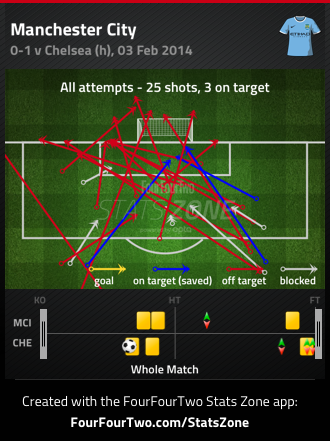 So, here’s the question: Did one of the most prolific attacks in the Premier League suddenly forget how to shoot? Was it just a bad day at the office? Or, is there something about the way Chelsea defends that makes it harder for opponents to hit the target? Chelsea does lead the league by only allowing 2.9 shots on target per game. It seems likely the credit should go to them here for applying defensive pressure in ways that make shots that typically pepper the target fly astray.

On the field, Chelsea were clearly the better team yesterday, but a lot had to do with how they capitalized on Fernandinho’s absence at the heart of City’s team. Ironically, replacing the central midfielder with a central defender actually made the game a better spectacle. Without him, Chelsea were able to commit an extra man forward, while still doing whatever magical defensive voodoo they do to keep teams from shooting straight. That meant the game wasn’t the usual cautious defensive affair that Mourinho often creates when his teams face top opposition. It was fun to watch — and even better, it makes the rest of the season more fun to watch.

It remains a three-way race to the finish, and for the first time all year City look vulnerable. The rest of the league has until Fernandinho steps back on the field to take advantage.

“He’s a clown,” Cousins said of Dunleavy. “And he’s scary. I wouldn’t waste my time if I ever saw him outside of the gym.”

Grantland NFL Podcast: The Seahawks and the Super Bowl