King for a Day: American Pharoah and the First Triple Crown in Generations 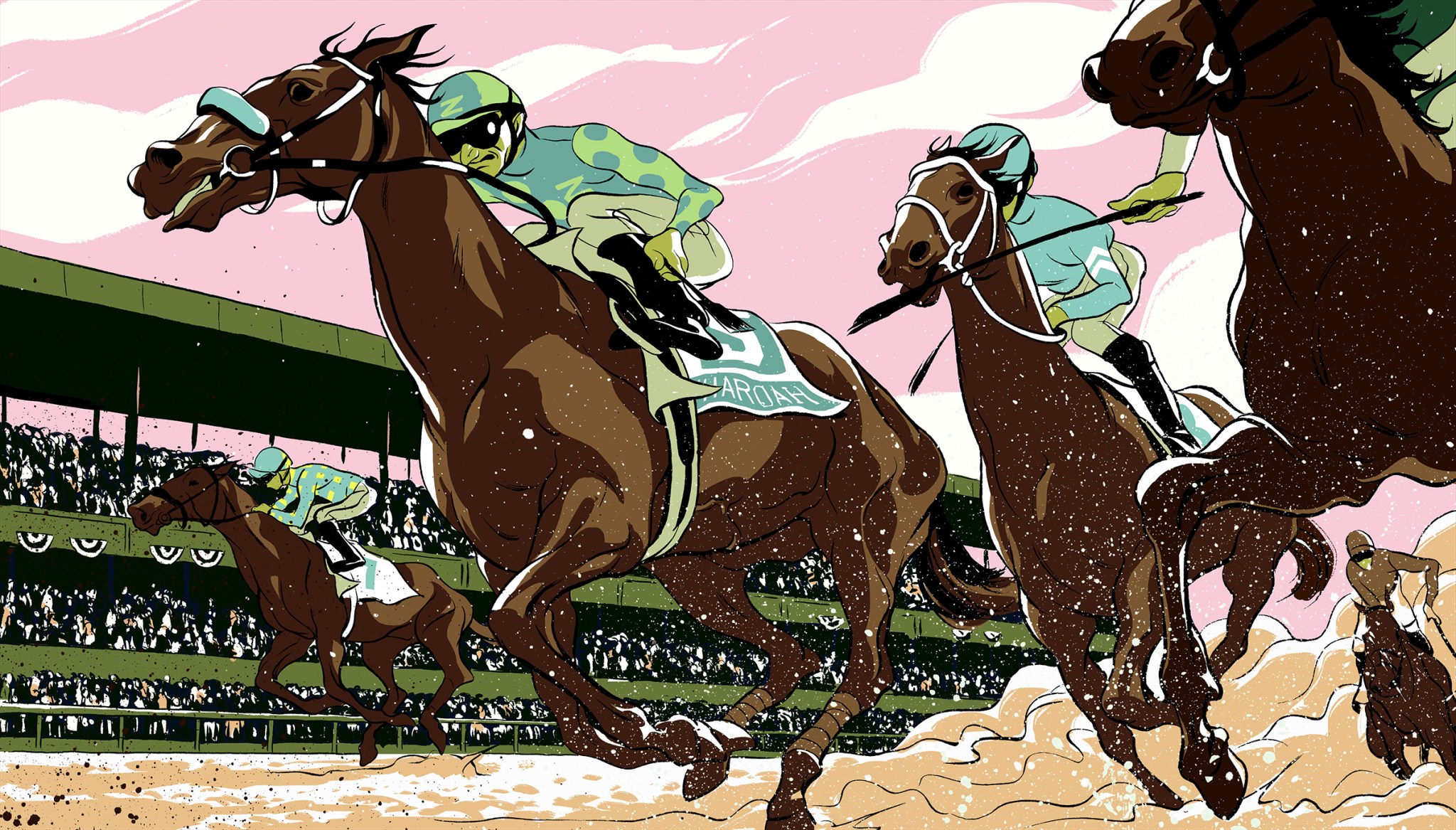 It is always dangerous to humanize racehorses — they can be dumb beasts and occasionally crazy ones — but it has been a natural thing for humans to do since the day the first Arabian outran the wind. And on Saturday afternoon, as the field turned toward home, you would swear that American Pharoah had decided to play with the heads of his rivals behind him. He had led the field almost from the moment they’d popped the starting gate — his jockey, Victor Espinoza, swore he’d taken “a step backward” at the start, but if that happened it was imperceptible to anyone but him — and now he was a couple of lengths ahead of Frosted, a game and wonderful racer known for his late speed. For all the world, it looked like American Pharoah had allowed Frosted to get just close enough and then, suddenly, the space between them exploded and flooded with pure joy — joy that flowed through the sunlit stands and spread to the grounds of Belmont Park and beyond. Everyone felt its sweep.

For the first time in 37 years, and only the 12th time in history, a 3-year-old horse has won the Kentucky Derby, the Preakness, and the Belmont Stakes. American Pharoah won in good weather and in bad; his Preakness win was on a track that looked like a mudslide. He won at all three distances, and he ran his greatest race over the longest, hammering the field in the Belmont with a blazing 2:26.65 over the mile and a half. And, while it wasn’t Secretariat’s colossal victory back in 1973, it was the second-fastest Belmont among Triple Crown winners, and the swiftest overall in 14 years.

“It’s like comparing fast cars to slow ones,” said Espinoza. “The first time I rode him, [I said], ‘Wow. I have a Kentucky Derby winner.’”

If we’re always at risk of over-sympathizing with racehorses, it also would be a capital mistake to describe this horse as some kind of machine. The happiness that spread out from the stands and onto the final eighth-of-a-mile was something organic and growing, something of one species saluting the obvious athletic gifts of another. It certainly touched Espinoza and trainer Bob Baffert. This was the former’s third crack at a Triple Crown and it was Baffert’s fourth. Had American Pharoah not won, the two of them could have argued for years which one of them was the Buffalo Bills and which one was the Minnesota Vikings of the track.

“I’m telling you, there’s something about [this horse],” Baffert said. “God put him in my hands and he is just an incredible animal. I mean, this was American Pharoah.” He paused. “You got to admit, that is a great name they gave him.”

There simply was no stopping Baffert’s horse on Saturday. Once out of the gate, and after that phantom step backward, Pharoah burst free in the first turn, which is about when Espinoza knew he had the winner. “He was just ready,” the jockey said. “My plan [was] just open up and hit one or two lengths and after that slow him down and let him just be happy and run the racetrack.”

The vast Belmont backstretch was damned near a triumphal parade. You could see all the other contenders make meek little runs at the lead and then drop back a ways, as if there were a vibrating sphere of power around the favorite. Then came the big, sweeping final turn, when Frosted made his last push, and the entire place detonated in bursts of happy sound. It was the expected result — American Pharoah went off at 3-5, after all — but there was still an undeniable sense of surprise to it anyway. It’s been a long time, after all. This was something that hadn’t happened since before the Internet, before the Macintosh and the iPod, before companies merged and banks swelled, and before instant communications and the marketing thereof. The thrill was vestigial, at least by the standards of our age of perpetual motion. That’s what kept it pure. That was what kept it free. It was people and it was a horse, both genuine creatures from different parts of creation, beyond naming rights and copyrights, an easier place before brands.

I found myself staying at the track long after the race was over. Not because I had to work, but because I didn’t want to let go of the day. This caught me by surprise. I realized that I had seen what very likely will be the last “First” I will see in person in sports. (This, of course, depends vitally on the Chicago Cubs maintaining their history of futility until after I depart the earthly plane.) I’d never seen a Triple Crown winner. The first horse to come close in my memory was Damascus in 1967, Sword Dancer’s son who’d won the Preakness and the Belmont, but who’d run third in the Kentucky Derby because, so they say, he’d been spooked by the enormity of the event around him. That was when I became aware of what a big deal the Triple Crown was. Then we weren’t far removed from the days when horse racing was one of the four major American sports, along with baseball and boxing and college football. Most of the people who’d seen Citation win in 1948 were still around, and they were still writing, and some of them were still broadcasting. I’d watched the incredible run in the middle-to-late 1970s that began with Secretariat and ended with Affirmed, the last horse to turn the trick before this sweet, lengthening Saturday evening, 37 years later. I can’t remember the last time I clung to a day the way I did on Saturday — not in any ballpark, arena, or playing ground in a very long time.

“He ran a helluva race,” said Gary Stevens, the 52-year-old jockey who’d run seventh aboard Tale of Verve, and who has seen more of horse racing’s history, good and bad, than any of the other riders on Saturday. (Stevens, it should be recalled, played George “The Iceman” Woolf in the film version of Seabiscuit.) “The race was over in the third jump from the gate. It was over. It’s great to come back to a screaming crowd instead of booing one. It’s a pretty cool moment.”

By then the sun had blessed the horizon with orange, and the shadows were stretching down the homestretch pretty much along the same path that American Pharoah had traveled as a swift, narrow slice of history. As it turns out, the day’s racing card wasn’t over yet. Out of the twilight, the call to the post sounded, and it rang clearer and more vividly than I’d ever heard it before, like an old song that comes on the radio and reminds you why you loved it, and the memories that hang on it, in the first place. Night was slow falling, and that was a very good thing.

Stanley Cup Weekend: What We Know So Far