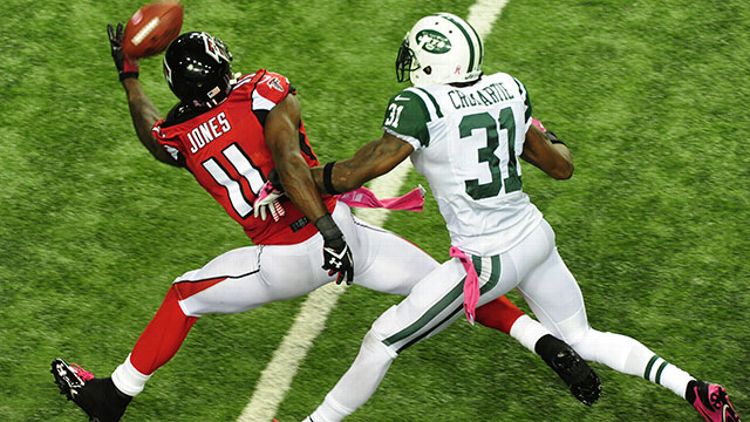 The good news for Atlanta sports fans is that there’s nothing left to pin your hopes on for a while. It’s been a gruesome 24-hour period: The Braves were knocked out of the National League playoffs on late-game heroics by the Dodgers, the Falcons were shockingly upset at home on a last-second field goal by the Jets, and today, Jay Glazer reported that star Falcons wideout Julio Jones will miss the rest of the season with a foot injury. Jones is off for a second opinion, but it seems exceedingly likely that he will miss significant time.

In a way, the Falcons were already in rough shape. At 1-4, they were four games behind New Orleans in the NFC South, so chances were that their season wasn’t going to amount to much. The Jones injury just seems to confirm that. Looking at the bigger picture, though, there are questions to be raised about the decision to acquire Jones and the overall plan of general manager Thomas Dimitroff.

To be clear: I’ve got nothing bad to say about either party. Dimitroff is a very good general manager who does a very sound job identifying and acquiring talent through the draft. Jones is a phenomenal wide receiver when he’s healthy. By making that draft-day trade to acquire Jones in 2011, Dimitroff further implemented a higher-risk, higher-reward strategy for building his football team. The Falcons started to become a stars-and-scrubs team, built around a handful of stars (and would-be stars) with little depth behind them. When everything goes right, as it did in 2012, this produces a dominant football team. In 2013, with the breaks going against Atlanta, it has produced a feeble disappointment.

When you analyze a multi-pick draft day trade like the one the Falcons made for Jones, it’s easy to get lost in the returns. That trade ended up resolving itself to be a three-way deal where the Falcons got Julio Jones, the Chiefs got Justin Houston, and the Browns got a bunch of rocks: Phil Taylor, Greg Little, Owen Marecic, and Brandon Weeden. (The Browns also used a fourth-round pick from the deal to move up from fourth in the 2012 draft to third and take Trent Richardson, so that doesn’t help.) If you were the Browns, you would obviously deal those players for Jones (or Houston) in a heartbeat. You wouldn’t make that trade if you were the Falcons. All that is very clear, and from that perspective, the Falcons won the trade.

That’s not enough of an angle to fully break down that swap, because it ignores the opportunity cost the Falcons incurred by making the deal. By acquiring Jones, they were able to procure an extremely valuable wide receiver, but the deal also hurt them elsewhere on their roster. The three notable picks they dealt away included their first- and second-round picks in the 2011 draft and their first-rounder in the 2012 draft. Those picks could have been used to acquire — if I’m cheating and picking the best player at a need position for the Falcons at the time they were drafting — Muhammad Wilkerson, Randall Cobb, and Doug Martin. That’s a trade the Falcons would make.

In other words, by acquiring Jones, the Falcons turned three spots on their roster that would have likely been filled by quality players (given Dimitroff’s ability as a drafter) and replaced them instead with street free agents (or with late-round picks, in which case the players at the positions the Falcons would have taken in the late rounds with a full complement of picks were replaced by street free agents). That’s not inherently a good move or a bad move, but it’s a higher-variance move. It means you’re more dependent upon Jones to play at a superstar level because there’s little to fall back upon if he isn’t able to.

When you look at Dimitroff’s broader plan, it’s clear to see that he was building a team around a core of high-paid veteran players with little middle-class talent on the roster. Matt Ryan. Roddy White. Tony Gonzalez. Justin Blalock. Jonathan Babineaux. Asante Samuel. Last year, that group included veterans like John Abraham, Michael Turner, and Dunta Robinson, each of whom was released during the offseason to clear cap space for a new set of contracts that included new deals for Ryan, Sam Baker, and William Moore, along with short-term deals for imports Steven Jackson and Osi Umenyiora. New deals will soon need to be written for Jones and Sean Weatherspoon. It’s Atlanta’s standard operating procedure at this point.

The Falcons need the players in that paragraph to stay healthy and play well. Last year, most of their high-paid players managed to do that; the only guys they would have been disappointed with were Brent Grimes, who suffered a torn Achilles in Week 1, and Ray Edwards, who was released after a disappointing year and a half with the team after attracting a five-year deal in free agency. Crucially, the core of the offense — the passing attack — produced an enormous amount of value, which drove Atlanta’s success to and through the playoffs.

This year, obviously, that hasn’t been the case. White has hobbled through the first five games of the year with a high ankle sprain. Jackson has been out since Week 2 with a hamstring injury. Baker has missed two games with a knee issue. Weatherspoon is out until Week 11 at the earliest with a Lisfranc injury. Samuel has missed two weeks with a thigh injury. And now, of course, Jones is the biggest injury of them all. Every team has to deal with injuries, but Atlanta is dealing with a particularly brutal stack, and they’re poorly equipped to deal with the consequences.

That’s how you end up with this current Falcons team. You might see the one with Matt Ryan and Tony Gonzalez in lights, but when opposing teams turn on the film, they see an overwhelmed Lamar Holmes at left tackle and dismal journeyman Jeremy Trueblood at right tackle. They see Peter Konz in over his head at center and dream about bringing A-gap pressure the next time Matt Ryan wants to take a seven-step drop. They see Jacquizz Rodgers stretched into a feature role and comfortably push an extra man into coverage, and when they notice that it’s Harry Douglas and the ghost of Roddy White split out, they comfortably shift the help over to slow down Gonzalez or Jones. They see undrafted free agents Joplo Bartu (who has been the best of the bunch) and Paul Worrilow at linebacker and take advantage of their inexperience. They see Stephen Nicholas in coverage and laugh at his range. Then, when they really need a big play, they dial it up against torched nickel back Robert McClain, a journeyman cut by the Panthers and Jaguars, or first-round pick Desmond Trufant, who has to do too much while adjusting to the speed of the NFL. It’s a team with a few stars and a lot of replacement-level talent desperately trying to keep up. Last year, the stars won out. This year, the scrubs are pulling them down.

Some of this is unquestionably bad luck. Atlanta’s 1-4 record has come in five games that were each decided by a touchdown or less, and since Ryan arrived in town, the Falcons had been 27-10 in such games. They were likely going to decline anyway, but they’re three plays from being 4-1.

So, what do the Falcons do now? Play out the string, I guess. Their new stadium has already been approved, so they had great timing there. They could still theoretically compete for a wild-card spot in a wide-open NFC, but Atlanta is going to have no passing game to speak of. The Falcons should certainly consider shutting down White, who has gritted his way through an injury that he should have been resting. The other move, which seems obvious given that he’s retiring after the season, would be to deal Tony Gonzalez away. Several contenders could use a tight end who can catch the ball, but none more than the team Gonzalez left in search of a Super Bowl in 2009: Kansas City, which has been stuck using third-string journeyman Sean McGrath as a starter due to injuries. It would have been impossible to imagine six weeks ago that Gonzalez would seriously consider leaving the 13-3 Falcons in search of a winner on the 2-14 Chiefs, but situations change quicker in the NFL than they do in any other league. Atlanta seemed like a lock to compete for its perennial playoff berth in the NFC in 2013, but five weeks in, its season is likely over.