It’s a Celebration: Kevin Durant and Another Sunday at the Drew League 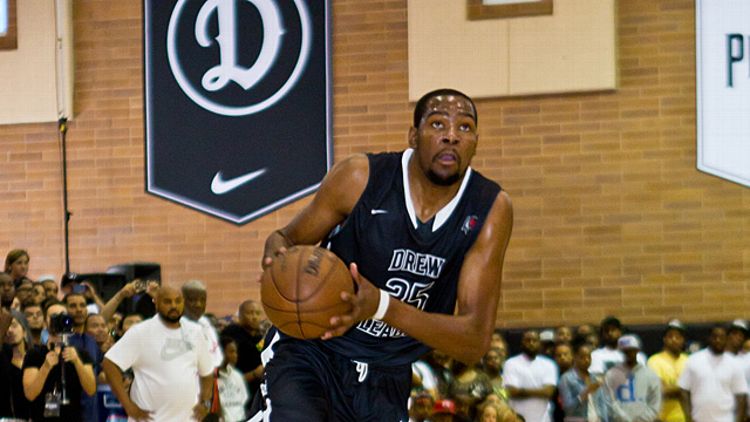 There are plenty of ways to spend a Sunday in July, but when you hear that Baron Davis is betting $50,000 with The Game on summer league basketball involving Kevin Durant, suddenly your plans are pretty much set. Or at least mine were. So, after checking out the Drew League a few weeks ago, on Sunday it was time for another pilgrimage to King Drew High School to see the biggest summer league on the West Coast. And there were a few different reasons this weekend’s edition was great; let’s just deal with them one by one.

News of Durant’s arrival leaked early last week, so there was already a line wrapping halfway around the gym at 11:30 a.m., and if you didn’t know somebody, you weren’t getting in. That’s what kind of event this was. Inside it was standing room only, and when I finally found a spot on the far baseline, someone nudged me and pointed out Worldwide Wes sitting courtside. That’s what kind of event this was.

The game was one thing, but watching Wes pregame was its own sort of entertainment. I swear to God, Wes knows everyone in the world somehow. He just sat there courtside with a steady stream of well-wishers walking over to shake hands and pay tribute. He’s like the basketball Godfather. He makes any event seem 10 times cooler. I want Wes at my wedding one day, holding court and telling stories about Jay Z and John Calipari.

Sunday, Wes’s presence only heightened the buzz for the monster matchup between The Game’s team, The Money Gang, and Baron Davis’s squad and three-time defending champs of the Drew League, LAUNFD (L.A. Unified). (For the record, we don’t know whether there was actually a bet for $50,000 on this game, but we definitely know that Game has an important Twitter name.)

As we said a few weeks ago, The Game is basically the Drew League’s Mikhail Prokhorov. All summer long he recruits different superstars to come through and run with The Money Gang, creating a different sort of superteam every week. Meanwhile, LAUNFD is dominated by a group of guys who played together in high school, and Baron Davis sponsors them. Sunday, they weren’t messing around. They leveled the playing field by recruiting Durant, and even Davis suited up for the occasion, the first time he’s played at Drew League in years. Those were the headliners we knew about coming in, but there were more.

There were rumors all day that Chris Paul was going to show up. Kevin Love, too. James Harden was supposed to come down to Compton to play on the same team as Durant. Oh, and Derrick Rose. And maybe Tupac.

This is how any NBA summer league works — there are always endless rumors about who’s in town and headed down to Drew League, or Rucker, or Barry Farms. Good rule of thumb: Nobody’s playing until they’re actually on the court. Sunday, Durant was the only megastar who actually showed up, but even if we didn’t get Love or Rose or Tupac, we did get the reunion we’ve all been waiting for since 2004. Captain Jack and Ron Artest, finally on the same team again.

Both of them were fantastic. Metta was called Mr. Queensbridge all day, a.k.a. Mr. QB, and somehow he scored 29 points and grabbed 13 rebounds to lead The Money Gang in scoring. I still don’t know how it happened. As far as Mr. Queensbridge is concerned … You don’t realize quite how much of a disaster he is until you watch him play in a streetball setting, where everyone’s either dunking or pulling up for jumpers. Next to all that, it becomes twice as fun to see Ron Ron turn basketball into a combat sport. At one point he barreled into three people and lost the ball, and the announcer laughed, “He looked like a running back!”

If you think about it, that’s the Metta World Peace Experience in a nutshell. For the past 10 years he’s done his very best to turn basketball into football. Isn’t that why we love him?

On the other hand … introducing Metta and Stephen Jackson into summer league is a little bit terrifying. Summer league is designed for people like Nick Young and DeMar DeRozan. Guys who dunk and shoot 3s and never play defense. Captain Jack and Metta? All they do is hustle and elbow people and play uncomfortably aggressive D — if they played in regular pickup games, you have to think that 80 percent of said games would end in massive brawls. As it stands, Metta was on the court for maybe three minutes before he took a hard foul, pegged the ball off someone’s back, dodgeball-style, and picked up a technical. (Spectacular.)

For Captain Jack’s part, he took the game more seriously than anyone on the court. Anytime Jack caught the ball on offense, the announcer, George, would say, “Can’t believe Pop left you off the playoff roster!” This was usually right before a missed 3, but whatever. He shined on defense instead, where he checked Durant for the entire game, never letting up. And he did a pretty solid job throughout the afternoon.

Better than Captain Jack’s defense: The shouting match he got into with someone on the LAUNFD bench, culminating with a sequence in the fourth quarter in which he blocked a shot, then turned around and stared at the bench for a solid 10 seconds. “He ain’t got no backdown in him!” the announcer explained. It was the understatement of the century.

I’m just saying, between Metta’s offense and Jack’s defense and their team eventually pulling out the win, Captain Jack and Mr. QB were the two most valuable players on the court Sunday. Apologies, Kevin Durant. Now and forever, nobody can touch the 2004 Pacers.

Every Summer League experience needs someone like Bobby Brown, the local guy who’s going harder than anyone and dominates NBA players up and down the court. Brown was in the NBA for a few years — bouncing among the Kings, Clippers, Hornets, and T-wolves from 2008 to 2010 — and since then, he’s been overseas. He was Drew League MVP for LAUNFD last year, and Sunday he was an absolute monster. Think Bobby Jackson with the Kings 10 years ago, or maybe Jason Terry with the Mavericks.

I don’t know how many 3s he hit Sunday, but he and Durant were more or less trading possessions for the entire game. This is how LAUNFD kept pace with The Money Gang — Metta, Stephen Jackson, DeMar DeRozan, Shannon Brown, Keith Closs, and a handful of local stars — thanks mostly to Durant and Bobby Brown handling things on offense. It was a one-point game for most the day, and everything was dead even until the very end, when … well, we’ll get to Durant.

The Game and Baron Davis

These are two men who have mastered the retirement phases of their careers. Baron Davis suited up for LAUNFD on Sunday, looked awesome in warm-ups, then played like 90 seconds before deciding, “Nahhhhh, I’m too old for this shit.” Then he went back to the bench and just hung out for the rest of the day. Per usual, Baron Davis is winning at life.

As for Game Prokhorov, his insistence on playing with The Money Gang is maybe the greatest part of the Drew League experience. He plays pickup basketball like I do — no defense, all kinds of cherry-picking, and in the half-court offense he basically just floats around the 3-point line. And he never stops shooting. My favorite sequence from Game was when he was wide open in the corner, caught the ball, crossed himself with the Hail Mary, and immediately shot another brick. Jacoby and I were counting, and I think Game’s final stats were 4-4 on layups and 0-8 on 3s. But he kept shooting!

Game Prokhorov is a hero to lazy pickup players the world over.

When I grow up, I want to play on The Money Gang.

I first saw Kevin Durant play summer basketball four years ago in Southeast D.C. I remember it because I was one of like three white people there, and Miles Rawls — the famous Goodman League announcer — called me out for looking like Tom from Myspace, annnnnnd said I had a haircut like one of the Beatles. He also once heckled President Obama, so I considered it an honor.

Anyway, Durant wasn’t one of the two best players on the planet at that point, but he was still a star, and from the second he showed up the park was packed and going crazy. Durant did his thing, and most of what made it cool was that he showed up at all. What’s weird is that he’s still doing it.

A lot has changed in four years. Durant really is one of the biggest stars on the planet now. On Saturday night in Santa Monica, Nike held an event where Durant showed up for 20 minutes and it drew 1,000 people.

On both Saturday and Sunday, watching him get mobbed by fans on his way in and out, you’d think this whole scene might get old for Durant, but at least this weekend he looked like he was having as much fun as anyone. Even as he’s become an international “brand,” he’s still the dude who will show up and run with anyone, anywhere, regardless of the crowds that come with him. Sunday he was going to war with Stephen Jackson, crossing up all kinds of helpless defenders and pulling up from all over the court. It all ended with a chance for a game-winning 3 from KD, and … it rimmed out.

This was THE WORST, absolutely. Everything was lining up for the legendary KD finish and the LAUNFD upset, and … it just didn’t quite come together. Terrible. But 30 seconds later, nobody really cared.

That drew league so fun!! We lost to the money gang smhh..thanks to LAUNFD for letting me get some bump in..

“We are filled to capacity,” said George, the Drew League PA announcer, midway through the game Sunday. “Got us crammed in here like sardines!”

Right. We were all crammed in and standing for the better part of two hours, but nobody was complaining. That’s what makes the summer league scene so surreal. It’s pretty rare to find a group of 1,500 people who are all in a good mood, but it happens every weekend at the Drew.

It’s all way too much fun to take seriously. There are rivalries, and stars, and — holy shit — there’s so much dunking, but in the end it all boils down to something like a basketball-themed party. Whether the game winners fall or not, it’s just fun that it’s all happening and the guys like Durant are still showing up every week. #SummerIsSerious is the Nike slogan you’ll hear nonstop every weekend at the Drew, but in the end, none of it is really that serious. That’s what makes it great.