Is This Real? The Packers’ Faltering Offense 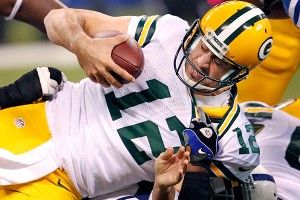 What’s happened to the Green Bay Packers? After running off a 19-game winning streak that stretched over two seasons, a magical playoff run, and a Super Bowl win, Green Bay’s gone 4-5 in their last nine games. (Talk about selective endpoints.) Aaron Rodgers, Charles Woodson, and Mike McCarthy looked like they were infallible a year ago; now, after a 2-3 start to the 2012 season, they’ve come in for criticism.

And notably, it really isn’t the Packers’ defense that’s experienced a significant decline. That drop came last year, when a unit that ranked second in both points allowed and DVOA during that 2010 championship season fell off to 19th in points allowed and 25th in DVOA. Although they took some flak after Andrew Luck’s final drive against the Packers on Sunday, Woodson & Co. are up to 14th in points allowed and 12th in DVOA this season. The notably scary problem there is that their takeaway rate has collapsed; after ending a league-best 18.6 percent of opposition drives with turnovers during the prior two seasons, the 2012 Packers have forced just five takeaways on 56 drives, a rate of 8.9 percent. They could start by recovering a fumble or two, but since they’ve only forced two in five games, it’s not all that remarkable that they’ve failed to recover any of them.

Well, let’s start by noticing what’s changed. If you look at Aaron Rodgers’s rate statistics from 2011 and 2012, Rodgers looks like a different player in every aspect of the game short of completion percentage. Although he’s just as accurate as he was last season, Rodgers’s interception rate has doubled, going from 1.2 percent to 2.1 percent. That’s no surprise, since interception rates in the 1 percent range never stick around for multiple seasons; in fact, Rodgers had a 1.3 percent interception rate in 2009, and it promptly bounced back up to 2.3 percent the following year. The good news is that 2.1 percent is both pretty good and totally sustainable, so even though it looks bad when you read that Rodgers had six picks all of last season and four in five games this year, it’s not quite as ugly as it might seem.

What’s more distressing is the drop in Rodgers’s yardage production. Last year, Rodgers led the league by averaging 9.2 yards per attempt, a figure that gave him the best career YPA for any player since the merger at 8.2 yards. During his pre-2012 career, Rodgers got more each time he dropped back than any player of his generation. This season, Rodgers is averaging fewer yards per attempt — 6.9 — than Sam Bradford or Ryan Fitzpatrick. Rodgers is looking up at the league average of 7.1 yards per attempt. That’s the biggest problem with the Green Bay offense. But why is it happening?

Is it an issue with yards after catch? My memories of the 2011 Packers offense revolve around Jordy Nelson running seemingly endlessly through fields empty of defenders, so I thought a drop in yards after catch might be driving at least some of the decline in the Green Bay offense. That wasn’t the case. In 2010 and 2011, the Packers were 11th and 13th, respectively, in the percentage of their passing yardage that came after the catch. This year, they are ninth. Instead, the difference is that Rodgers is throwing shorter passes than he did during the two previous years. After the Green Bay offense (with 2.5 games of Matt Flynn) averaged a hair over 7.0 yards in the air per completion over the past two years, Rodgers is averaging a full yard less in the air through his completions this season. One yard doesn’t sound like a big deal, but if you take a yard off of every single Rodgers completion for an entire season, it’s right around 10 percent of his total production in an average season coming off the books.

The Packers are seeing the remnants of that decline as their down and distance scenarios change, too. (All stats below only include situations in which the Packers and their opposition were within a two-score margin, to avoid using stats accrued in blowouts.) In 2010-11, Rodgers averaged a whopping 10.0 yards per attempt on first down; this year, that’s down to 8.6 yards per attempt. Consequently, even though Green Bay averaged a half-yard more per running play on first down, they’re facing more difficult third downs and converting them less frequently. The 2010-11 Packers needed an average of 6.5 yards to pick up a first down and averaged a full seven yards per play, converting for the new series 45.3 percent of the time. That was the sixth-best rate in the league. This year, they need 7.8 yards to pick up their average third down and are only getting 5.8; their 41.4 percent conversion rate is 12th in the NFL.

Oh, and one more stat that reveals the true cause of these problems: Green Bay’s quarterbacks were sacked 6.6 percent of the time on third down during 2010 and 2011. This year, that’s doubled to 13.8 percent, the highest rate in the league. You can blame Rodgers or his receivers for that, but in reality, it’s the weak link of the Packers — the offensive line — that’s produced those problems.

It makes sense. Rodgers’s sack rate on other downs has spiked, too; after being sacked on a relatively average 6.8 percent of his dropbacks during his previous four years as a starter, he’s all the way up to 10 percent this season. When one out of every 10 plays results in a sack, that’s going to create a lot of long third downs, and when they happen on third down, that’s going to produce a lot of punts. If Rodgers doesn’t have a lot of time to throw, he’s going to have to check down and hit his hot receiver for a small gain before someone can get open downfield; that’s how his completion percentage has stayed the same even as his yards per attempt have dropped like a stone. And then, once that’s become a consistent trend, it’s no surprise to see McCarthy call safer plays that are designed to keep Rodgers upright.

There are plenty of reasons to think the line would be worse when you look at the personnel changes, too. Of the five linemen who started the Super Bowl win over the Steelers just 20 months ago, only two — right guard Josh Sitton and right tackle Bryan Bulaga — remain on the Packers roster. Bulaga had a notably bad game against the Seahawks by his own admission, but that’s a very good right side for any offensive line, with two players who are Pro Bowl–caliber performers when healthy.

The rest of the line? Not so much. With 2011 first-round pick Derek Sherrod still on the shelf after breaking his leg last December, the Packers are stuck starting 2010 fifth-rounder Marshall Newhouse at left tackle. Newhouse was able to get by last season, but he’s had a rough season this year (against an admittedly good group of pass rushers). Left guard T.J. Lang remains effective, but new center Jeff Saturday was available in free agency and offered a front-office job by the Colts for a reason; he’s not the same player at 37, and the advantages he gained through his familiarity working with Peyton Manning aren’t the same with a new scheme and a new quarterback. Saturday’s a stopgap, and when you try to get by with stopgaps on your offensive line, you tend to struggle.

Packers fans have lived in hope by virtue of their tough schedule. Green Bay’s offense started the season against two elite defenses in San Francisco and Chicago, and they scored 22 and 23 points, respectively, against a pair of teams that have allowed an average of just 11.8 points in their eight other contests. Since then, though, the Packers scored 12 against the Seahawks (who are at an average of 14.5 points per game otherwise), 28 against the Saints (31.5), and 27 against the Colts (20.8). And while the Seahawks famously embarrassed the Green Bay offensive line during the first half of their Monday Night Football tilt, the offensive line hasn’t otherwise done a great job in the other four games, where they’ve allowed the opposition to sack Rodgers 7.9 percent of the time. That’s not quite as bad as the 10 percent figure, but it’s still well above his career average of 6.8 percent.

The good news is that the schedule does get a bit easier. After the Packers get through with the Texans this week, Green Bay has a four-game stretch that includes games against the Rams, Jaguars, Cardinals, and Lions, who should offer various degrees of hospitality. Five of their NFC North games are still to come after their Week 10 bye, though, and that includes the stout defenses of the Bears and Vikings. For all the talent that remains on that Green Bay offense, it’s going to take an improved effort from a suddenly porous offensive line to produce a passing attack that resembles last year’s squad. If the offensive line can’t keep Rodgers on his feet to make plays, the Packers won’t return to their lofty heights from 2010-11, both in terms of offensive performance and postseason success.