Is the Public Still Buying ‘Money’ Mayweather in 2013? 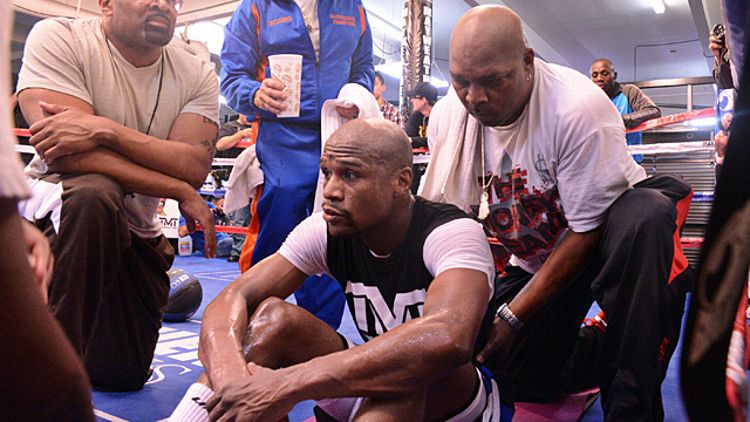 May Day (proper noun): The name recently given to an unofficial boxing holiday, so called because Floyd Mayweather is about to headline a boxing pay-per-view event on the first Saturday in May for the fourth time in seven years.

Mayday (noun): The international radio distress signal, from the French m’aider, or “help me.”

We won’t know for sure until the PPV purchase numbers come in following Mayweather’s May 4 bout with Robert Guerrero, but it’s starting to feel like both definitions might apply to this fight. Mayweather’s previous Cinco de Mayo weekend showdowns against Oscar De La Hoya, Shane Mosley, and Miguel Cotto drew 2.4 million, 1.4 million, and 1.5 million buys, respectively. ESPN.com’s Dan Rafael estimated last week that Showtime, which is entering the first fight of a possible six-fight deal with Mayweather, needs slightly more than 1 million buys to break even on the Guerrero fight. Showtime will not reveal its actual break-even point; Showtime Sports executive vice-president Stephen Espinoza told me that considering the ancillary factors associated with having Mayweather under the network’s banner, “the deal is worth every penny” no matter how many PPV sales the fight generates. Regardless, there’s a growing sense among boxing insiders that 1 million buys is no sure thing.

And that concern is largely attributable to the fact that, before Mayweather and Guerrero can begin pummeling each other, the dead horse that is “Money” Mayweather documentary programming has been taking an ass-whipping.

Mayweather didn’t invent boxing-documentary/reality-television/prefight-hype programming, but he has become its face. He and De La Hoya starred in the first iteration of HBO’s 24/7, and while Oscar was the bigger draw coming in, Mayweather emerged as the star of the show, the ideal button-pushing personality for the reality-TV era. He went on to headline five more 24/7 series, with gradually diminishing returns from an entertainment perspective. Once you know everything there is to know about the A-side fighter, the show is only as strong as the B side’s personality allows. Typically, that has translated into enough material for one compelling episode to kick off a series, followed by the remaining three episodes groping for tangential minutiae (Cotto’s best friend got gastric-bypass surgery! Mosley’s trainer had a stroke!) while time is filled with artful slo-mo footage of boxers punching bags.

When Mayweather made the jump from HBO to Showtime for the Guerrero fight, he also made the jump from 24/7 to All Access, which is essentially the same show with Common narrating instead of Liev Schrieber. Two episodes have aired thus far; the third premieres tonight. As Yahoo Sports’ Kevin Iole reported, viewership for the initial Wednesday broadcasts dipped from 105,000 households for the first episode to 64,000 for the second. On 24/7 last year, Mayweather and Cotto drew as many as 493,000 for a single episode. Of course, external factors like lead-ins and competing programs in the time slot always affect ratings. Espinoza points out that with replays on Showtime and on sister networks, with the show available on demand and online, premiere viewership is nowhere near as important as total viewership, and he says aggregate viewership of Episode 1 has exceeded 1.5 million.

People can draw their own conclusions about how the show is performing. The conclusion I’m drawing: Ratings are down — at least somewhat — and it suggests to me that the viewing public is finally tiring of Mayweather’s shtick.

And that’s a problem that Showtime has compounded by contributing to extreme Mayweather oversaturation. Showtime is admirably putting all of its promotional power behind this fight, but if my suspicions about the public’s Mayweather fatigue are correct, the network might be too late. It’s like how MTV launched two Jersey Shore spin-offs right around the time America began to burn out on the network’s golden juiceheads, and the ratings for the new series as well as the flagship tanked in unison. In addition to the four episodes of All Access, we’re getting the one-hour career retrospective Mayweather this Saturday on CBS, plus assorted original digital content.

The festivities kicked off on April 3 with the hour-long 30 Days in May, a one-sided film executive-produced by Mayweather that paints him as a victim after he pleaded guilty to domestic assault. A few of the highlights:

Through the first two episodes of All Access, it’s safe to say it doesn’t rival the offensive qualities of 30 Days in May, but there are other problems. Plotwise, very little has happened so far other than Guerrero’s arrest on a firearms possession charge in New York, which received limited airtime. Mayweather is locked in a ferocious battle with the vanilla Guerrero to see who can have fewer interesting things to say. The closest thing to a compelling sound bite thus far came when the “down-to-earth” Mayweather said, “If you don’t have no money at all, but you rich at heart, you’re with the Money Team.”

Unfortunately, being rich at heart doesn’t cover the cost of being a boxing fan, and it’s unclear how many of them will shell out $64.95 for the HD PPV broadcast. Maybe my pessimism is misplaced, and this fight will equal or surpass the 1.25 million buys Mayweather’s 2011 fight with Victor Ortiz brought in. Mayweather-Guerrero is a rare PPV fight in which the quality of the matchup arguably exceeds its hype, and the undercard is one of the strongest boxing has put together in years. But compared to typical Mayweather events, this one seems to be lagging in buzz with 10 days to go. It doesn’t help that Mayweather has been doing very little press from the start, leaving Guerrero to carry the promotion — and that Guerrero more or less stopped doing interviews after his arrest.

But if we are indeed headed for the lowest-selling Mayweather PPV in five years, maybe we can point the finger at something completely unrelated to Showtime’s programming and marketing efforts, or the fighters’ unwillingness to stump for the bout in media. Maybe the biggest impediment to public interest tracks back to last December, when Manny Pacquiao face-planted against Juan Manuel Marquez in the same MGM Grand ring where Mayweather will face Guerrero. Mayweather vs. Pacquiao was boxing’s grand tease, the richest fight in history that never happened but that nevertheless repeatedly drove both Mayweather and Pacquiao past the million-buy barrier. As sick as the hard-core fans were of the mainstream media redirecting the conversation toward Mayweather-Pacquiao, the existence of that conversation — the theoretical superfight hovering in the ether — sold a lot of pay-per-views for both men.

If the upcoming “May Day” event is going to be a hit on pay-per-view, then everyone involved had better hope Saul “Canelo” Alvarez is a reasonable substitute for Manny Pacquiao. Alvarez did his part last weekend with an impressive victory over Austin Trout, and the will-they-or-won’t-they dance between Canelo and Mayweather has already begun. Will the notion of a September Mayweather showdown against the 22-year-old Mexican heartthrob with “cinnamon” hair generate an extra couple hundred thousand buys in May? Showtime certainly wouldn’t mind if Canelo helps sell Mayweather-Guerrero, just in case neither Mayweather nor Guerrero gets the job done.