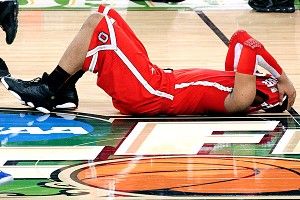 With respect to Harrison Barnes’s decision-making, Perry Jones III’s passiveness, Terrence Jones’s tendency to look uninterested, Royce White’s anxiety, Meyers Leonard’s maturity, and Austin Rivers’s hubris, the biggest question mark in this year’s draft has to be how much Jared Sullinger’s back is going to affect his career. Had he put his name in last year’s draft, the two-time first-team All-American almost certainly would’ve been taken in the first five picks, but thanks to a variety of factors, he wasn’t even invited to the green room for this year’s draft and figures to not even be drafted in the first 20 picks. He’s the quintessential example of why even though many consider it noble and loyal for a surefire lottery pick to return to college, the smart play is always to go after the NBA riches. Because while an extra year of college is nice and admirable, you can’t make it rain on strippers or light a fatty with an extra year of college like you can with briefcases full of Benjamins.

The cataclysmic fall of Sullinger’s draft stock in the last 12 months is a cautionary tale for future college basketball stars, and not just because of the back issues that troubled him throughout his sophomore season. The fact of the matter is that even without the back problems, a multitude of other concerns arose this past season. His stats weren’t that much worse than they were his freshman season, but anybody who followed Ohio State basketball will tell you that 2011-12 was clearly much more of a struggle for him than 2010-11 was. To his credit, Sullinger shed a ton of baby fat over the summer of 2011 and entered his sophomore year about 30 pounds lighter, but all of this weight loss actually backfired and took away his ability to literally throw his weight around and carve out space on the block. Taller, more athletic defenders could just wall him up and make him shoot over them, which proved to be difficult for a guy who plays below the rim.

Consequently, Sullinger frequently got visibly frustrated and either tried to force the issue by jumping into his defender and throwing up a wild shot or settling for ill-advised challenged outside jumpers. Even if he had a completely healthy back, his NBA potential would’ve been called into question, so it’s no wonder scouts have serious concerns, especially when you factor in the fact that he was red-flagged for back problems following a pre-draft physical. And that’s to say nothing of his defensive problems.

With that said, it wouldn’t surprise me one bit if Sullinger ended up being the biggest steal of this year’s draft. What was glaringly obvious to me and explained his personal struggles in 2011-12 more than his bad back or thinner frame was the fact that Sullinger’s help was considerably worse this past season than it was during his freshman year. As a freshman, Sullinger had the best shooter in Big Ten history in Jon Diebler and a veteran slasher who could get to the rim at will in David Lighty to spread the floor for him. This past season, thanks to Diebler and Lighty graduating, Ohio State had neither a knockdown shooter or a slasher who could consistently take his defender off the dribble, which is why Sullinger faced many more double teams than he did the season before. Still, he managed to put up pretty much the exact same stats and led his team to a Final Four. And he did so with a bulging disc in his back — an injury that would have put you or me on the couch for at least a month — plaguing him the entire season.

Most importantly, Sullinger has an unbelievable motor and is the “first to arrive and last to leave the gym” kind of guy. He’s got fantastic footwork for a player his size, he’s got a sharp basketball mind, and he can shoot and handle the ball better than you might think. This is why I think far too many people are focused on his worst-case scenario — a poor man’s DeJuan Blair (who, by the way, was red-flagged for knee problems before the 2009 draft yet has played in 227 of 246 regular-season games in the last three seasons) — instead of his best-case scenario: The Celtics taking him at 21 or 22, and after giving him three years to keep shedding weight, learn the ways of the NBA from Boston’s old guys, and get his back problems straightened out; he ends up being Kevin Love 2.0 (guy who plays below the rim but thrives because he’s fundamentally sound with his back to the basket, can use his body to create angles to score, has range to the 3-point line, and is a tenacious rebounder) while playing second fiddle to Rajon Rondo after Paul Pierce and Kevin Garnett retire.

Here’s to hoping it’s the latter and not the former.