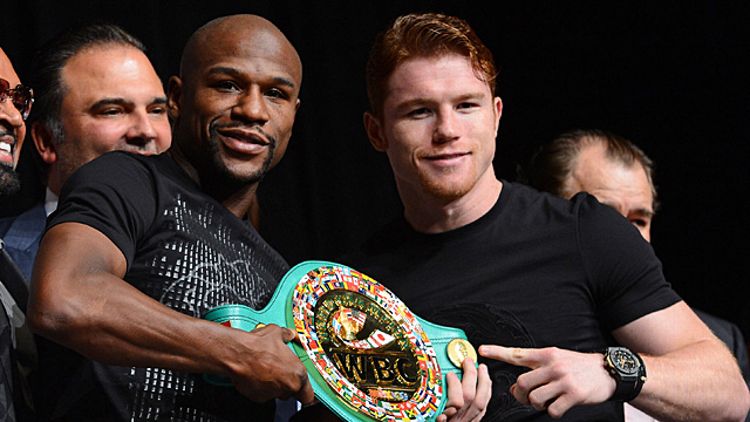 On June 16, 2012, a week after the Tim Bradley–Manny Pacquiao decision that launched every conspiracy theory short of a fourth judge on the grassy knoll, HBO broadcaster Larry Merchant uttered possibly the most perfect quote I’ve heard in my 16 years covering the sport: “Nothing will kill boxing, and nothing can save it.” It’s unfortunate that those who insist on offering opinions about boxing despite never watching boxing didn’t hear Merchant deliver the line. In nine words, he rejected all of the dead-sport-in-need-of-saving rhetoric that ironically surfaces most on those nights when the sport is at its healthiest.

This Saturday is just such a night. In the buildup to boxing’s biggest event in six years, Floyd “Money” Mayweather vs. Saul “Canelo” Alvarez at the MGM Grand in Las Vegas, mainstream media outlets have informed the world that Mayweather is boxing’s last superstar, that this is the sport’s final moment of relevance, that all the fans are dying off or moving over to MMA. If it sounds familiar, it’s because it’s exactly what we heard and read when Mayweather took on Oscar De La Hoya in 2007 in the so-called “Fight to Save Boxing.”

Enjoy the last major fight ever, folks. Nobody will replace De La Hoya. Oh, but pay no attention to those 10 pay-per-view fights over the next six years that will break the million-buy barrier.

Nothing will kill boxing. And nothing can save it. But it does need at least a household name or two in order to continue producing these crossover events that make pugilism’s elite filthy rich and inspire the contradictory doomsday rhetoric. Boxing will always survive. But the superstars are essential to making it thrive.

As a teenager reading the August 1990 issue of Pro Wrestling Illustrated, a phrase in a caption referring to the Ultimate Warrior’s victory over Hulk Hogan at WrestleMania VI has always stuck in my head: “the smoothest transfer of world title power the sport has ever seen.” Never mind that pro wrestling isn’t a sport — Hogan lost directly and cleanly to Warrior, giving his successor an aura of authenticity.

The same happened in boxing in 2007 and 2008. De La Hoya, by far the most bankable star of his era, suffered two defeats in 19 months, at the hands of Mayweather and Pacquiao. Both pound-for-pounders were attracting in the neighborhood of 400,000 PPV buys before taking on Oscar. Since beating De La Hoya, Mayweather’s six fights have averaged 1.17 million buys, while Pacquiao’s eight have averaged 1.06 million. Beating The Man doesn’t always make you The Man, but in these cases it did because the requisite charisma (in one form or another) and elite talent were in place.

De La Hoya lost, twice, but the story wasn’t the death of boxing’s last great star. It was the birth of boxing’s next great stars. And if Mayweather loses on Saturday night, same deal. The 23-year-old Alvarez is the most popular young fighter in North America by a wide margin, even if there’s some debate over just how popular he is. The bigger questions about him concern not his marketability but his ability. Is he actually a special fighter? If it turns out Canelo is special enough to topple Mayweather, he instantly becomes boxing’s newest million-buy superstar, with the erasure of Floyd’s self-ballyhooed undefeated record giving him that final push to the top.

Not to fuel the boxing-is-dying lobby, but there is cause for some concern if Alvarez doesn’t win and isn’t the next big thing. Who are the other candidates right now? Maybe Adrien Broner, but there’s a lot of work to be done there. Almost certainly not Andre Ward, magnificent as he is from a skill perspective. Possibly Gennady Golovkin, but he’s already in his 30s and still rather unproven. Perhaps it’s somebody just hitting the pro ranks who we’ve barely even heard of.

For the moment, Canelo is by far the top candidate. And the timing is right for a passing of the torch, because Pacquiao is undeniably slowing down and Mayweather, at age 36 and with a couple of temporary retirements already in his rearview, is likely to be gone within another few years. It’s not a case of boxing needing Alvarez to win this fight — but if he doesn’t, boxing’s best chance for a direct transfer of power from one generation to the next passes the sport by. It would mean the next PPV superstar has to grind his way there without the exponential bump that comes from dethroning the king.

And whenever you start talking about what’s in boxing’s best interest, the conversation leads to conspiracy theories. Look at this fight from the perspective of Golden Boy Promotions, which promotes Alvarez but doesn’t technically promote Mayweather (rather, it partners with Mayweather Promotions on a fight-by-fight basis). Financially, isn’t using Mayweather to launch the 13-years-younger Canelo the best long-term play for Golden Boy? Or look at the short term, for Golden Boy, and for Showtime, which is in the second fight of a six-fight contract with Mayweather and is widely believed to have lost money on the first fight of that deal, Mayweather vs. Robert Guerrero. If Alvarez beats Mayweather, then Floyd’s next fight is a rematch that’s an even bigger financial bonanza than tomorrow’s fight will be. If Mayweather beats Alvarez — specifically, if he beats him conclusively — then there is no rematch, and Floyd is probably looking at a Guerrero-level opponent next.

The idea of a “fixed” fight in modern boxing is something of a myth, but the same theories about David Stern’s office communicating to referees which NBA team they’d like to see advance can apply to boxing. The conspiracy theorists will say that judges know what’s preferable for the business, that they know who the “house fighter” is, and that they will often score close rounds accordingly. It’s not a “fix,” exactly. But nor is it a level playing field. And if this fight goes 12 rounds and is remotely close, Mayweather might be on the wrong end of that tilted plane. Hell, all three judges found a way to give Guerrero three rounds against him. Going back to the confounding decision that inspired Merchant’s perfect quote, if Pacquiao could get jobbed against Bradley, then anything is possible.

Again, much hinges on whether Canelo is transcendent as a boxing talent or only as a ticket seller. But if he is the former, and if he can defeat Mayweather, we’re talking about a cathedral ceiling for his earning potential. Mayweather was 30 when he defeated De La Hoya to become a household name. Pacquiao was two weeks shy of his 30th birthday when he beat Oscar. Not since Mike Tyson has someone in his early 20s been the biggest star in the sport. If Canelo becomes a million-buy A-side at 23, that puts him on a path to shatter all the PPV records that Tyson, then De La Hoya, and then Mayweather set.

It’s a tantalizing proposition for a sport that isn’t dying and isn’t in need of saving, but will soon be in need of a new face to connect it to the mainstream. Canelo has the right face for the role. Unless, of course, Mayweather rearranges it.