In Through the Out Door: Baseball Prospects, Starting Quarterbacks, and Change in Kansas City 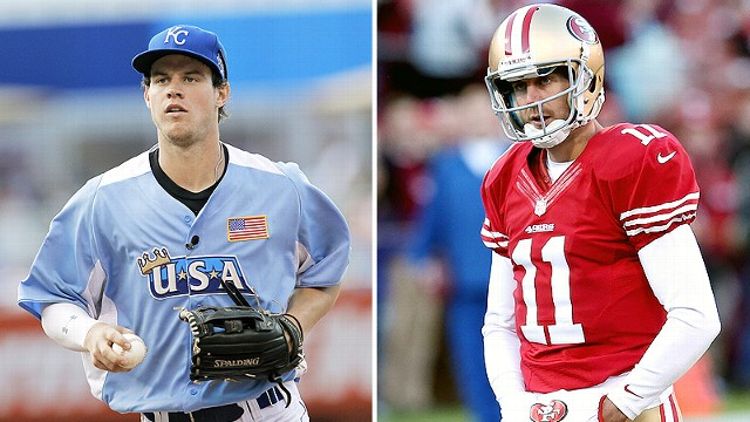 This is the kind of winter it’s been for Kansas City sports fans: The Chiefs just traded Wil Myers for Alex Smith.

At least it feels that way. It was barely two months ago that the Royals traded away half their farm system to the Tampa Bay Rays, including one of the best prospects in baseball in Myers, for a pair of established starting pitchers in James Shields and Wade Davis. Now comes the news that the Chiefs have acquired Smith from the San Francisco 49ers in exchange for their second-round pick — the second pick of the round — and a conditional mid-round pick in 2014.

Both teams had a glaring hole at a key position to fill, and to fill it, each paid a desperation surtax while daring to take on one of the shrewdest organizations in their respective sports. The Royals needlessly gave up the crown jewel of their farm system and nearly caused me a nervous breakdown.

I probably should be having the same reaction to the Alex Smith trade. I mean, he’s Alex Smith. The guy who was a historic mistake as the no. 1 overall pick in the 2005 draft, given that the next quarterback taken in that draft was Aaron Rodgers. The guy who, as a rookie, threw one touchdown and 11 interceptions. The guy who, due to injuries and ineffectiveness, has started more than 10 games just twice in his eight-year career. The guy who held a clipboard while Colin Kaepernick took the 49ers to the Super Bowl.

That Alex Smith is a placeholder quarterback, the guy you start because it beats playing Tyler Palko or finding out what Jeff George is up to these days. That Alex Smith is worth a fifth-round pick, maybe a fourth-rounder if you’re feeling charitable, because the rules say you have to have someone under center, and he’ll buy the organization time to find a real quarterback. The Chiefs went 2-14 last season. This rebuild is going to take years; they’ve got plenty of time to get it right.

So I was fully prepared to hate on this trade the way I hated the trade for Shields. But after some reflection, I’m surprisingly sanguine about it. Quarterbacks and no. 1 starting pitchers occupy the same perch atop their respective sport’s hierarchy of importance, but you’re much better off overpaying for the former than for the latter, for a couple of reasons:

1. In any given game, the quarterback and the starting pitcher have roughly equal importance, as they are the dominant but not sole determinant of what happens on one side of the ball. A starting pitcher still relies on his defense and his bullpen to help prevent runs from scoring; a quarterback still relies on his line, his receivers, and his running back to score points.

But of course the quarterback plays every game. Until Justin Verlander finds a way to start 162 games — don’t tell me Jim Leyland isn’t tempted — there’s no way for a starting pitcher to have that kind of impact. The St. Louis Cardinals can lose ace Adam Wainwright on the eve of the season and still win the World Series. But when the Indianapolis Colts lost Peyton Manning, they dropped from 10-6 to 2-14 (and after they drafted Andrew Luck, they bounced back to 11-5).

Quarterbacks have more impact on the course of their team’s football season than any baseball player can have on his. It’s the nature of the game, and it isn’t close.

2. Free agency comes with strings attached in the NFL. When Shields is a free agent in two years, he can sign with any team and the Royals can’t do anything to stop him. But the combination of the franchise tag and the salary cap in football mean that, for all practical purposes, a team that lands an elite quarterback can keep him for as long as it wants.

The only top-tier quarterbacks to switch teams in recent memory were Drew Brees and Peyton Manning. Both quarterbacks had suffered significant injuries that put their futures very much in doubt, and both the Chargers and the Colts made the cold business decision to replace them with top-five picks in the draft (Philip Rivers and Andrew Luck). You could argue whether Brett Favre was still an elite quarterback when the Packers let him go, but that’s just it: They let him go.

This particular item doesn’t apply specifically to the players at hand. Shields has never been on the DL in his career, while Smith spent all of 2008 on injured reserve. But past performance is no guarantee of future results.

That is, at least, an arguable position. After Jim Harbaugh was hired as San Francisco’s head coach in 2011, Smith found his groove. Over the past two years, 32 quarterbacks (exactly one per team) have thrown more than 450 passes. Among them, Smith ranks seventh in completion percentage (64.3%), 13th in yards per attempt (7.36), and seventh in passer rating (95.1). By the advanced metric DVOA, Smith was 14th in the NFL in 2011 and 10th in 2012. If you put aside what he did as a young player in a then-dysfunctional organization, Smith grades out as an above-average quarterback.

On the one hand, he won’t be bringing Harbaugh with him. On the other, new head coach Andy Reid knows a thing or two about handling quarterbacks.

There are two other reasons why Chiefs fans are terrified of this trade. Both of them are based on emotion, which means they’re irrational and yet completely justifiable.

The first is that we just went through this same damn thing four years ago, when a new GM (Scott Pioli) immediately plotted a new course for the organization by trading the 34th pick in the draft for quarterback Matt Cassel. Cassel worked out so well that new GM John Dorsey was willing to trade the 34th pick in this year’s draft — and another pick next year — to replace him.

I am of the opinion that you shouldn’t hold an organization accountable for the sins of its preceding front office. It turns out that Pioli couldn’t tell a football player from a tackling dummy — although he did know how to keep the stairwells free of candy wrappers — so it’s no surprise his trade for Cassel was such a stinker. (And it’s never a good sign when a new GM immediately reaches back to his old organization for a security blanket, as Pioli did with Cassel. Neither Dorsey nor Reid have ever worked with Smith before.)

Cassel had neither Smith’s pedigree nor his level of success — in his one season starting for the Patriots, he ranked 20th in the NFL in DVOA. His failures should not portend anything for Smith one way or the other. After all, the last high-profile quarterback the Chiefs acquired before Cassel, Trent Green, was also an expensive acquisition (costing the team their first-round pick) despite a short track record of success. Green turned out to be the franchise’s best quarterback of the last 40 years. If Smith replicates Green’s career in Kansas City, this trade will be a win.

The other reason Chiefs fans are upset is that this trade means that the franchise’s generation-long streak of trying to win with second-hand quarterbacks will continue indefinitely.

In 1983, the Chiefs had the seventh overall pick, and it was the vaunted Year of the Quarterback. John Elway went no. 1 overall. Jim Kelly went no. 14. Dan Marino went no. 27. The Chiefs selected Todd Blackledge.

That selection so traumatized the franchise that in the 30 years since:

1. The Chiefs have never again drafted a quarterback in the first round.
2. Not coincidentally, no quarterback developed by the franchise since Blackledge has won a single game for the Chiefs. Not one.

While the Chiefs haven’t developed their own quarterback even once, Smith becomes the fourth starting quarterback in that span to be acquired directly from the 49ers, following Joe Montana (1993-94), Steve Bono (1994-96), and Elvis Grbac (1997-2000). Chiefs fans got tired of begging for the 49ers’ table scraps in the 1990s, and we were in no mood to try again now.

But that’s on us, not on Smith. It’s not his fault the Chiefs earned the no. 1 overall pick for the first time in a year when there was simply no quarterback worthy of the selection.

And anyway, he could do a lot worse than to emulate one of the other 49ers retreads the Chiefs brought in. Under Montana, the franchise went to the AFC Championship Game after the 1993 season, the only time they’ve made it that far since they won the Super Bowl in 1970.

That’s the good news. The bad news is that the Chiefs haven’t won a playoff game since. If Smith can break that streak, he’ll be a bargain at any price.