In Praise of Lance Stephenson 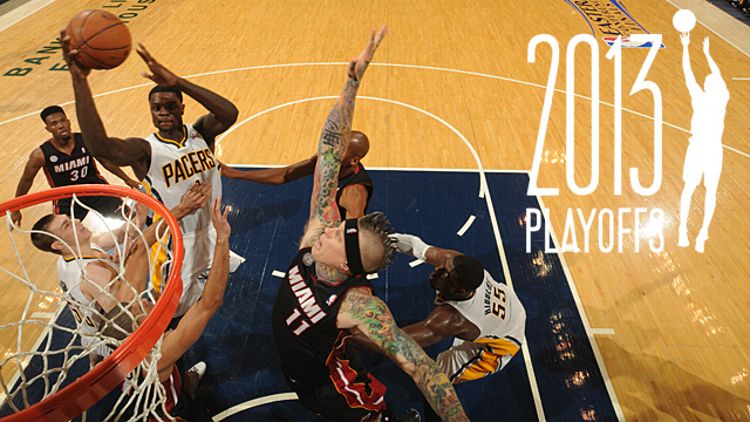 Let us now praise famous flakes, like Lance Stephenson, of Brooklyn and the Indiana Pacers. But, first, let us now praise famous moments, because something happened Tuesday night in Indianapolis that you can watch a lifetime’s worth of professional basketball and never see again. There was a brief, and very decisive, and altogether unprecedented, outburst of genuine officiating, and it was directed at the best player in the world, and that, my dear young person, simply is not done.

There were 56 seconds left in Game 4 of the Eastern Conference finals, and Indiana was leading Miami by what seemed to be a very shaky four points at 96-92, and Dwyane Wade came around LeBron James at the top of the circle. Stephenson, guarding Wade, brushed James as they went by. A whistle blew. Everyone stopped. James was called for a moving screen. It was James’s sixth personal foul, and he would now have to leave the game. For a brief second, everyone on the court remained motionless, as though something very strange had fallen unbidden from the ceiling. I have watched a great many basketball games, and I have not seen many players fouled out of a crucial game for a moving screen. (Good lord, if they called all the moving screens in college, the games would last 11 hours.) I have never seen a superstar fouled out of a game because of a moving screen. Larry Bird could have brought a submachine gun off the bench in the last two minutes of a playoff game and nobody would have blinked an eye. Michael Jordan could have slapped on a leather mask, fired up a chain saw, and dismasted half the opposing roster, and no referee would have seen anything at all. But the Heat lose James on a moving screen because that, we are told by NBA observers, is a “point of emphasis” this season?

So, with the unnatural events of the final minutes now dispensed with, let us praise Lance Stephenson, a one-time career omadhaun, as my old Irish gran would say, on whom Larry Bird took a flyer after Stephenson played one year at Cincinnati. Last season, in the course of being an omadhaun, Stephenson got tangled up with James in a completely different way, but, with 20 points and a couple of huge shots, Tuesday night he managed to make himself a vital part of a very important win for his team. Which is good because, during the 2012 playoffs, to borrow a phrase from Chelcie Ross’s character in Hoosiers, that same team may have wanted to hide-strap Stephenson’s ass to a pine rail and send him up the Monon Line.

In the third game of last season’s Pacers-Heat semifinal series, James missed a critical free throw. Stephenson, who wasn’t even in the game at the time, made a choke sign from the bench. This got him into wrangles with (in order) Juwan Howard and Dexter Pittman. It was a profoundly stupid thing to have done.

But this year, through hard work and the long process of de-omadhauning himself, Stephenson has made himself vital to Indiana’s success. He had his best previous game in these playoffs when Indiana closed out the New York Knicks, scoring 25 points, most of them in the lane, and completely undressing Carmelo Anthony with an up-and-under move that should hang in the Louvre. Tuesday night, his 20 points, and his stalwart defensive help on James, showed clearly that Stephenson is the wild card that enables Indiana at least to match Miami’s immense athletic ability. Paul George and Roy Hibbert are the stars, but Stephenson is the player who can make the Pacers great.

(In fact, if you consult Grantland’s Head of Research, Mr. Google, you will find more than a few feverish stories from 2008 acclaiming Lance Stephenson as “the next LeBron James.” I remember when every folk singer was “the next Bob Dylan.” Most of them turned out to be Bob Lind.)

“I’m going to be truthfully honest,” said Hibbert, overclubbing himself by at least an adverb. “Lance is a great player for us. He’s still young. This is really his rookie season despite the years he has. He’s playing consistent minutes this year. He has to grow up and is continuing to grow. … So I’m really happy for him. He knows he has to keep improving. We need him to win. When he plays like that, that’s great. If he can harness this every single game he plays, there’s no defense for that.”

“I just told myself to be aggressive out there,” Stephenson said. “They were on me, my teammates, telling me that I wasn’t being myself, and that they needed me to be myself out there. I’m telling you, I didn’t sleep very much at all last night.”

He had two huge moments Tuesday night. The first came at the very end of the third quarter when, after James had been hit with another mysterious foul call, Stephenson drained a 3-pointer from the deepest right corner to give Indiana a 77-70 working margin going into the final period. He greeted the basket with a little bit of the shimmy-shake, which set Pacers assistant coach Brian Shaw to shrugging ruefully on the bench. Every day, Stephenson and Shaw end practice with a game of Around the World and the only way to win is to hit the exact shot from the exact spot that Stephenson hit Tuesday night. “You know these young guys,” Shaw said. “They like to celebrate everything.”

(There also seems to be a difference of opinion on who wins this game every day. Stephenson says he does. “It really depends who’s telling the story,” Shaw demurred.)

The second one was a bit less dramatic, but every bit as vital. James had just drained a 3-pointer from the top and Indiana was clinging to a 94-92 lead. Stephenson took a pass from George Hill to the right of the lane, and looked nowhere but toward the basket. He flipped up a short jump shot that bounced three times on the rim before it fell through. It did more than give the Pacers breathing room. It demonstrated a level of confidence that Stephenson always has had, but which too often wasn’t remotely justified by his play. “My confidence always has been high,” he said. “I just have to remember to bring it every night, to bring it every game.

We Went There: Not Even the Joey Crawford Revue Can Steal the Pacers' Shine