I Suck at Football 2.9: Snow Falling on Quad Box 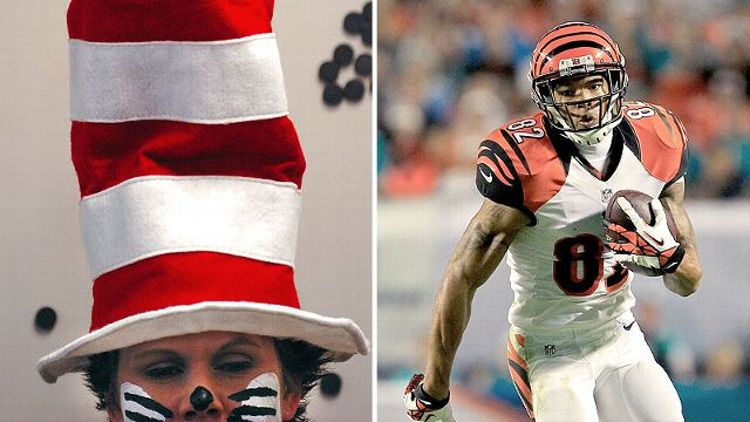 This year Halloween fell on a Thursday. That morning brings the first real roster controversy of the Ryan Kuhlman era. I bench Denarius Moore from the Raiders to start Marvin Jones from the Bengals. When I tell Ryan I’ve done this over email, he advises me against “chasing Marvin’s points from last week.” Which stings, although it’s exactly what I’m doing. Jones caught a career-high four touchdowns in the game against the Jets, the one I didn’t watch that everyone keeps talking about like it was Andy Dalton’s “Kendrick drops ‘Control'” moment. On some level, by starting Jones against the Dolphins on Halloween night I’m trying to re-create whatever magic led to that 49-9 score, which is the act of a truly delusional Bengals stan. My desire to make the Marvin Jones era into a thing that happens is preventing me from fully embracing the Mission: Impossible–like team-management philosophy of the Ryan Kuhlman era, which involves handpicking a team for every job. No sentimentality. We’re not a fantasy team, we’re a fantasy strike force.

But I’ve spent the whole week gassing myself up by listening to Bengals podcasts while doing the dishes. Bengals beat writers Joe Reedy and Paul Dehner Jr., co-hosts of the Cincinnati Enquirer’s Scribe Session show, sound guardedly not-totally-pessimistic after Week 8. Dehner even plays that stupid Family Guy clip he plays every time the Bengals take or dish out a real curb-stomping — a really inconsiderate running gag for those of us who have our hands submerged in soapy water and can’t fast-forward. Everyone’s above Family Guy references, although Dehner then gets my respect back by mentioning he visited Rick James’s grave when the team road-tripped to Buffalo earlier this month. It will probably not surprise you to learn that Rick James has a rad-looking grave.

I’m feeling super-freaky so I start Jones. I call the cable company and get an extra tier of sports channels turned on so I can check on the game during breaks from trick-or-treating with my daughter. She and my wife are dressed as Thing 1 and Thing 2 and I’m the Cat in the Hat. I went with the deluxe Cat in the Hat suit; there were lower-end versions available — you could get the Cat in the Hat equivalent of a tuxedo-front T-shirt, like a peasant would — but c’mon. There’s no room for halfway Seuss. I got the champagne/Cadillac of Cat in the Hat costumes, the full-length one with the real fake fur on the belly and the non-clip-on tail and the Bloodhound Gang head sock (and the three-fingered white gloves, which I immediately lose). We take my daughter around trick-or-treating, and then I spend the next few hours giving out candy to anyone who comes near my front yard, still dressed as a beloved trickster figure from children’s literature, because I am not just the greatest dad but also the greatest American.

I have a lot of residual childhood trauma around Halloween, because invariably I’d commit to some incredibly high-concept costume and wind up frustratedly explaining to one well-meaning candy-having adult after another that no, I wasn’t a TV set, I was Max Headroom from the criminally low-rated ABC dystopian-future series Max Headroom for fuck’s sake. So being the Cat in the Hat is amazing because everybody knows the Cat in the Hat, even if, when they point, some of them say “Mr. Seuss!” Children recognize me, adults ask me to pose for pictures with their kids. I pose. I make goofy Cat in the Hat–ish faces. I make treasured memories. I am the Daniel Day-Lewis of Cat in the Hat acting. At one point I duck inside to re-up on Reese’s peanut-butter pumpkins and flip on the Bengals game just in time to see Dalton hit Jones for a touchdown and spend the next little while thinking we’re rocking ass and the Marvin Jones era is upon us. I’m back outside before I see that touchdown get called back on account of a dumb holding call on Jermaine Gresham.

Toddlers in yellow Wolverine muscle-suits and fat kids dressed as War Machine give way to waves of hulking 16-year-olds in Scream masks, brandishing heavy plastic grocery bags and sneering cynical contempt for every part of the Halloween enterprise except me giving them free chocolate bars. Within 90 minutes we go through all the good candy from the drugstore and end up giving out anything we have left in the house that seems candylike. Later my wife realizes we’ve given out a bunch of health-food store herbal pops we bought to trick my daughter into consuming echinacea the last time she had a cold. (I gave most of those to the 16-year-olds, along with some withering side-eye.) I don’t see enough of the Bengals game to realize how nerve-racking it is — I miss Geno Atkins’s injury, for one thing. But when I finally run out of candy and close up shop, it’s 20-17 Bengals, and then the Dolphins’ Caleb Sturgis kicks a 44-yard field goal to tie it up, by which time I’m ready to start stress-eating my daughter’s Halloween candy. Instead, the Cat in the Hat opens a beer and watches the Bengals lose on a safety in overtime, for what is apparently only the third time in the history of the NFL. As Mr. Seuss once wrote, I do not like it.

The sports package I signed us up for also includes the RedZone channel, which I’ve heard about but never actually experienced until now. On Sunday morning, my wife and my daughter left the house to go do outside-world things. I said good-bye to them a little after 10 o’clock, realized the 1 p.m. games on the East coast had already started, and figured I’d flip on RedZone and see which games looked interesting while I tied my shoes and got ready to leave for Ye Rustic.

You can probably guess where this is going. Two and a half hours later I hadn’t left the couch. As everybody but me already knows, RedZone is that crack. It’s televised football stripped of the sloughs of grinding slowness. It’s like the Girl Talk version of football, nothing but hooks, an “Ante Up” or “Single Ladies” potentially around every corner. And when the screen splits into multiple simultaneous windows it’s as weirdly super-exciting as I’ve always heard. Love me two or possibly three or maybe even four times, RedZone!

I haven’t checked around, but I’m sure it’s been noted by people smarter than me that RedZone is an evolutionary adaptation on the part of an NFL desperate to suck up to fantasy dweebs. (I thought about this as I sat there with my laptop, all smug about how handily the Lords Disick were outplaying Niels Bohr’s team.) And someone has to have posited it as the handbasket in which people’s appreciation of the game’s less-dramatic fine points will go to hell, along with the sanctity of marriage and good penmanship and young people’s respect for the four elements of hip-hop. There may be a song about this on the new Arcade Fire record; I’ll never know.

I’ll admit that after my second cup of coffee and my first breakfast mini-Snickers and about an hour of RedZone action, I did start to feel a little nerve-damaged by the action’s sheer nonstopness. Touchdown Cowboys! Touchdown Saints! A butterfly beats its wings in Macau and the Carolina Panthers’ season-long streak of not allowing a first-half touchdown comes to an end! Triple box! Quad box! Whenever there’s a quad box, they should just add a fifth box that’s a lady tied to the train tracks or somebody trying to figure out which bomb-wire to cut. That’s how exciting it is. Every time I’d get up to do something other than watch RedZone, RedZone would zap me back to the couch like Richard Pryor’s talking bass pipe: “C’mon. We’re not going to do anything today. Me and you are just going to hang out in this room together and watch the final minutes of the Titans/Rams game and the Vikings/Cowboys game and the Chargers/Redskins game at the same damn time.”

I didn’t miss the boring parts, but I missed the feeling — which I have all the time during regular football games — that I could go to the bathroom or just let my mind wander without missing something of crucial importance. Years ago, writing about Hou Hsiao-hsien’s enthrallingly tedious Millennium Mambo in the Village Voice’s year-end film poll, the critic Ray Pride quoted a friend who’d sat through it with him at a festival screening: “I’m glad I was bored. I had time to think about why I was bored, and then snow started to fall.” I think about that quote all the time when I catch myself thinking of a work of art’s surface boringness as a flaw rather than just a barrier to worthwhile entry, and I’ve thought about it a lot while watching football, another narrative often characterized by long stretches of nothing happening (and occasional precipitation). There’s something irritating about it, but also something meditative. It’s good for us to think about why we get bored, why we need something to be happening all the time. Or it’s good for me, anyway.

That said: I could get used to experiencing this game without ad bombardment. The first time the all-seeing eye of RedZone cuts away from the Fox feed just as the initial snare-hit and horn blast of the going-into-commercial music starts to play, I actually say “Yeah!” out loud, like I’ve dodged some bullet of commercial information fired at my brain. There’s a moment late in the Kansas City/Buffalo game when there’s nothing else to cut away to and for five seconds I’m stuck looking at a Person of Interest banner ad superimposed on a blimp shot of Ralph Wilson Stadium while Greg Gumbel talks about how this week Jesus and Ben Linus will be catching those dastardly persons of interest on a new night and time. Just those five seconds are suddenly an unacceptable amount of branding exposure. Suddenly I’m Cayce Pollard, the protagonist of William Gibson’s Pattern Recognition, with her hyper-aversion to logos, her “morbid and sometimes violent reactivity to the semiotics of the marketplace,” her phobia of Bibendum. But it’s in my blood: My dad, who wrote ads for a living, has been a hard-core devotee of the “mute” button since the first day he owned a TV that came with the option. “Travel on mute!” he’d admonish me whenever I’d change channels with the volume up, and it was only half a joke.

Anyway: I can’t think of anything more absolutely American than an old-style televised football game broken up by commercials for trucks and computers and boner medicine, but the RedZone experience — which both stokes and caters to our need to have everything, right now, all at once — is close. I’d probably give up watching football in bars entirely but I’m worried I’d become even more of a weird agoraphobic mutant if I did. Even the Cat in the Hat had to leave the house occasionally. Oh, and I should also say for the record that Denarius Moore had a slightly better day than Marvin Jones on Sunday, by 16 yards. So it remains the Ryan Kuhlman era, and for now Marvin Jones just lives in it.