How Do You Solve a Problem Like Ronaldo? A Tactical Preview of USA-Portugal 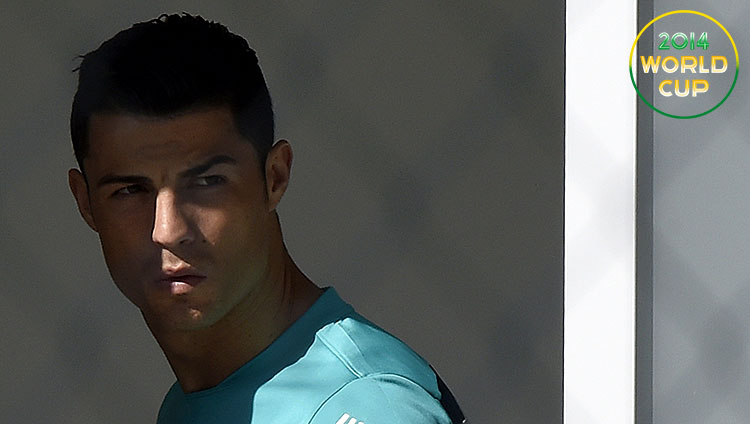 There are a lot of clichés about how to beat, or, in the case of the USMNT against Portugal, at least not get beaten by, a team with a superstar. Make somebody else beat you. Make him spend energy defending. Make him adjust to you. Let him get his, but keep everybody else under control. None of it’s particularly useful, and a lot of it is contradictory, but, hey, that’s what happens when we listen to clichés. Above all, though, none of it will help the USMNT control Cristiano Ronaldo. And, even though there will be 21 other players on the pitch on Sunday, the game will be all about Ronaldo. So here’s what the U.S. needs to focus on to get one or, dare to dream, even three points on Sunday.

First and foremost, scrap the defensive approach from the Ghana game, specifically on the wings. The U.S. basically played man defense on the flanks against Ghana. Each winger was responsible for a Ghanaian full-back, and each U.S. full-back marked an opposing winger. That’s a perfectly fine strategy, especially against a team with a balanced attack. But the approach has its weaknesses. The full-backs are put on an island, like corners going man against wide receivers. Against Ghana, which had a pair of strikers and two dangerous attacking full-backs, it made sense. Against Portugal, which lines us Ronaldo as a winger, it would be playing directly into that team’s strengths.

Ghana played a basic 4-4-2 (although the wingers played so aggressively, and Ghana had so much possession, that for much of the game it looked almost like a 4-2-4). Their strikers played centrally, so the U.S. central defenders didn’t get pulled to one side of the field or the other. In fact, one of the only times they did get pulled wide led to Ghana’s goal, when John National Hero Anthony Brooks was slow to recognize the need to rotate over and compensate for a clever combination that had dragged his partner, Geoff Cameron, away from goal.

Portugal plays 4-3-3. Its center forward (either Hugo Almeida if he’s healthy, Éder, Hélder Postiga) will be moving from side to side, specifically looking to drag people away from the middle to create space for Ronaldo. That will require the central defensive pairing for the U.S. to be much more flexible in its positioning than it was against Ghana.

Defensive positioning is important, but by the time Ronaldo is running at a defender, the first battle has already been lost. The U.S. needs to make Portugal work to get the ball into the attack third. It failed to do this against Ghana. In large part that was because, after successfully defending, the U.S. gave the ball back too easily.

This is the single biggest challenge the U.S. is facing, and it will be where the team feels the absence of Jozy Altidore the most. The U.S. relied on him to field long balls. The big benefit of the long ball is it allows a team to transition into quick attacks, but the other result is that it allows teams to reset their defensive shape.

Even if it’s only for 30 seconds and two passes, that crucial amount of time allows the defensive line to push farther up the field and away from goal, and the central midfielders to do the same. That way, even if the U.S. loses the ball, it’s positioned to properly contest a larger chunk of the field. Doing that is crucial. It will force Portugal to complete a handful of passes under duress if it wants to move into the attacking third of the field, and it gives the U.S. the chance to end the possession before Ronaldo terrorizes defenders and takes years off American fans’ lives. The first step to defending Ronaldo is making Portugal work to get the ball to Ronaldo.

Like with any great player, there’s no one right way to defend Ronaldo, but hopefully a mix of strategies will be enough to keep the superstar guessing. The U.S. can use the winger, whether it’s Alejandro Bedoya or Graham Zusi, to drop behind Ronaldo and show him an extra body. The U.S. caught a big break when Portugal’s left back, Fábio Coentrão, got injured. He’ll miss the game and the rest of the World Cup. Devoting both players on the same flank to an opposing winger can give a full-back a running start to attack, and Coentrão is a master at it. With him out it’s less likely the U.S. will be punished by an overlap run coming out of Ronaldo occupying a flank’s worth of defenders.

Klinsmann will almost certainly instruct right-sided center back Geoff Cameron to consistently stay close to his teammate at right back, Fabian Johnson. Even if that means the entire defensive side gets rolled to that side, it will be important that Ronaldo not get a clean look on goal just because he beats Johnson.

That means that Cameron’s partner (probably Matt Besler, but maybe Brooks) will have to be especially alert about rotating behind Cameron if he gets pulled wide. Likewise, DaMarcus Beasley (at left back) will have to tuck in narrowly in support when the line gets stretched.

One thing you don’t want to see, especially if the U.S. is playing with two strikers, is Kyle Beckerman forced wide to help for long periods of time. Portugal will already have three midfielders in the center of the pitch, which will give it a numerical advantage over the U.S. If Beckerman is continually being pulled wide, then the U.S. will be overrun through the center. That will leave the center backs as sacrificial lambs, trying to pick up midfield runners and leaving their primary duties. Before you know it, there’s Ronaldo popping up in the box somehow, unmarked. That’s how bad things happen.

With the entire focus of the team on Portugal’s left, Jermaine Jones, in many ways, will be a free safety coming from the opposite side of the field. Sometimes he’ll have to drop deep and pick up Nani (the winger opposite Ronaldo). Sometimes he’ll have to tuck in, to make up numbers. Jones is probably the only player on the field who will be tasked with paying even the slightest amount of attention to Portugal’s right back, João Pereira, who is quite skilled in his own right.

There will be a time (or two or three or six) when Jones will have to make a tackle, or an interception, or a foul to prevent things from devolving into disaster. Basically, if the entire team is focused on Ronaldo, Jones is the guy minding the shop. That’s an uncomfortable place to be. But, on the other hand, Jones is coming off the best match of his life. He thrives in a role that prioritizes buzzing around the field blowing stuff up. This could be his biggest task to date.

So that’s how you stop an unstoppable force. Make him earn every inch. Clog his area of the field and hope for a superhuman performance everywhere else. No problem. Do that and the U.S. could clinch a berth in the knockout rounds; fail and Ronaldo will just bury the ball in the back of the net. There isn’t much in between.