#HotSportsTakes: The Knicks Are Sick, But Dr. Phil Ain’t the Answer 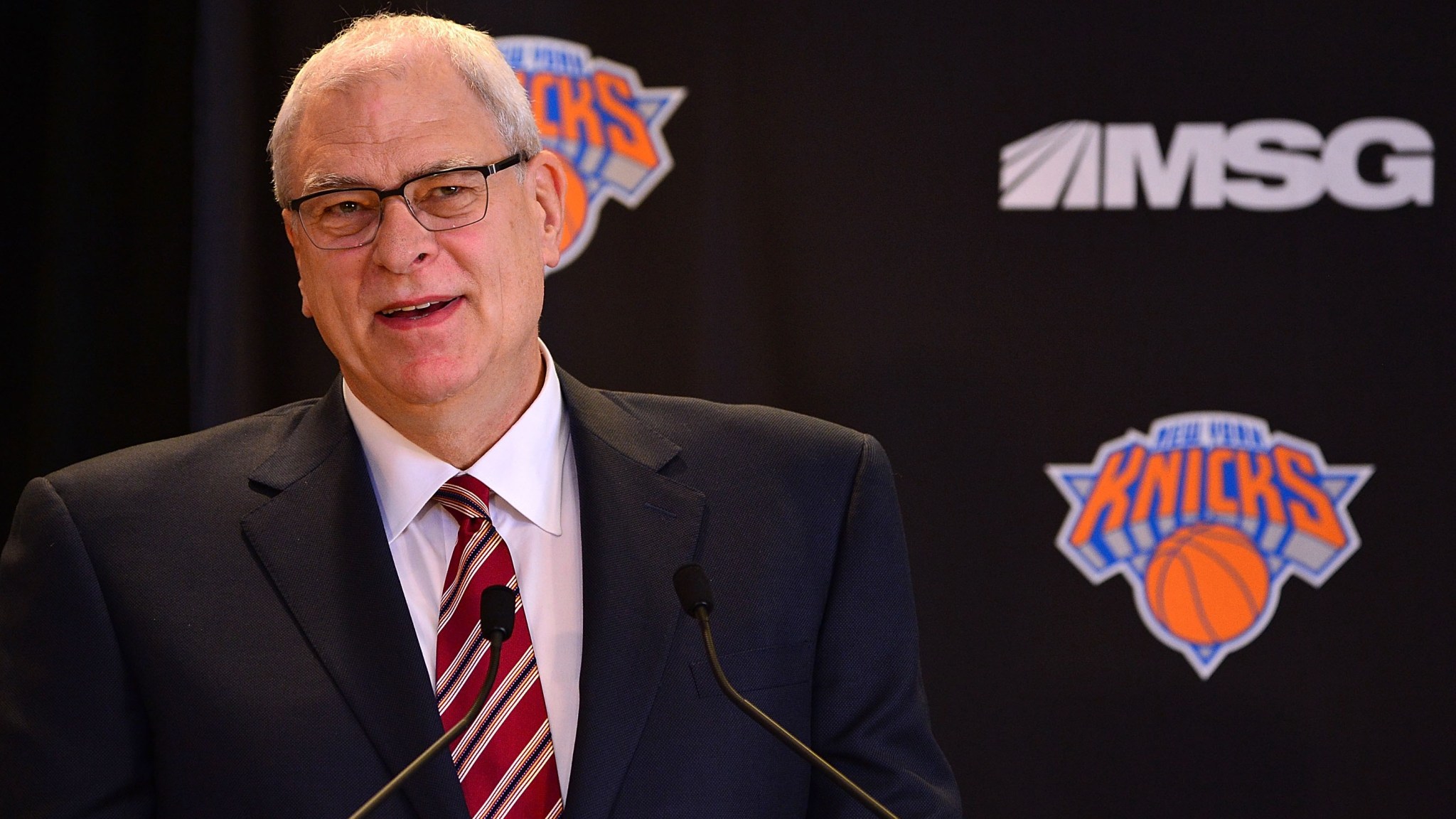 Every now and then, we will attempt to write the worst sports column on earth. Today: Let’s get honest about Phil Jackson .

NEW YORK CITY — Manhattan was in a good mood Tuesday. A dark winter of discontent had given way to new hope in the spring. As James Dolan boasted, “Getting somebody like Phil Jackson to come in and build the team is sort of like getting Einstein to help you with your math homework.”

The Zen Master’s in charge now. Basketball Einsten, himself.

Me? I say we run the numbers once more before we hand over the Nobel Prize.

For years now, Phil Jackson’s been selling himself as the Zen Master, and the whole world can’t stop buying it. Dolan and the Knicks are just the latest victims.

Look at what they were saying about Jackson in 1996: “Swift Eagle — Jackson got the Lakota Sioux warrior’s name when he and former New York Knicks teammate Bill Bradley conducted a basketball clinic at a reservation in South Dakota more than 20 years ago — has used his knowledge of Indian culture to promote the idea of a sacred quest among his players. Indeed, the book title Sacred Hoops refers not to the hoops in Chicago’s United Center but to the Native American metaphor for the loop of life, the ‘circle of existing things.'”

Read between the lines there. Jackson went to a Native American reservation and came back with a catchphrase. And then he turned it all into a book he could sell. What an interesting soul!

You want the truth about Phil Jackson? He managed to land the right gigs at the right time. Back in the Bulls’ glory days, Michael Jordan would have averaged 30 per game playing for Phil Donahue.

Sure, Coach Confucius “would burn sage to cleanse the team of negative energy and show game film intercut with clips from a movie about a Sioux warrior,” but that had nothing to do with championships that made the Bulls great. The NBA is a players’ league, and the Bulls won because Jordan wouldn’t let them lose. (That’s what always made him great.)

Los Angeles? Jackson had two of the three best players in the league when he went and got another three-peat. We’re really crediting the triangle offense for those titles?

I didn’t realize Pythagoras was averaging 30 and 15 in the NBA playoffs. I must have missed Jackson explaining it somewhere between the pregame Sioux peace ceremony and the zen theory postgame. Ask him about the game and his team and Phil starts speaking in Haiku.

But hey, it’s a cute move to get all obtuse when we dare ask about the triangle, right?

Maybe we just can’t see the angles like Jackson.

The Zen Master works in mysterious ways, you know.

That’s always been the story with Jackson. I’m tired of it. We don’t understand his nonsense, so we assume he must be smarter than all of us. And that, to me, is Dr. Phil’s only true genius. Who cares if he’s actually brilliant like Einstein?

He sounds brilliant, and that’s all that matters.

In today’s America, it’s more lucrative to look smart than be smart. I mean, you do the math. Jackson is making $60 million over the next five years. (I’d be pretty “zen” if I had that kind of bread in the oven. How ’bout you?)

This shift in what we value as Americans was on my mind while watching the Knicks parade Jackson in front of the media yesterday.

Teams have been chasing him for years, and all that time, you know who never got a call? 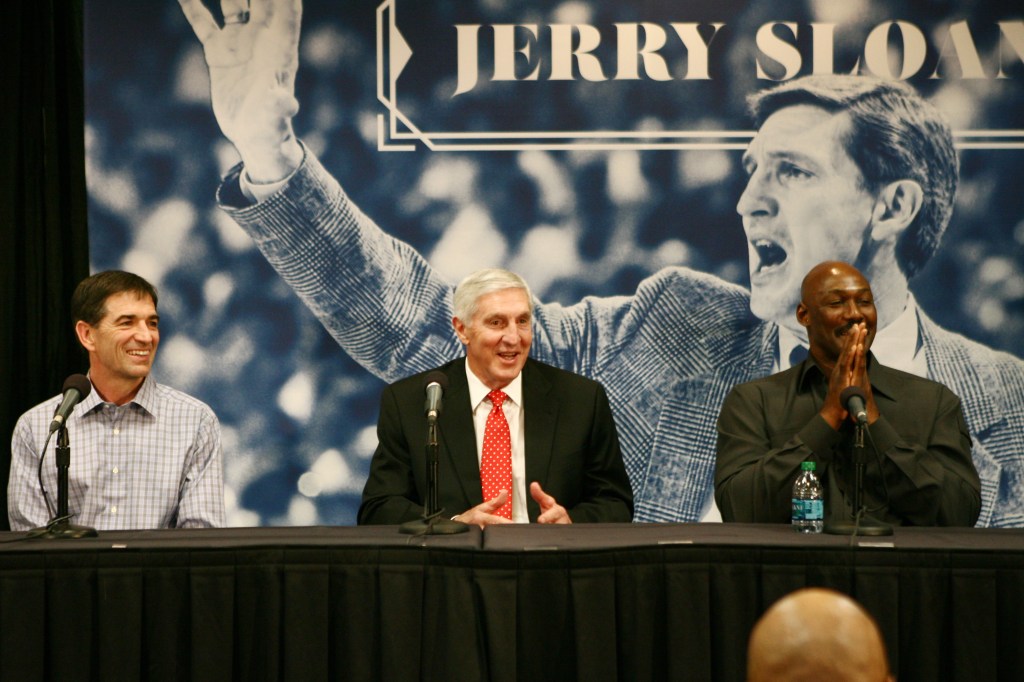 Zen? Not quite. Sloan was pure fire and brimstone. No frills, just will.

“Size doesn’t make any difference,” he once said when asked about the Jazz. “Heart is what makes a difference.”

Once you enter the Sloan zone, you better be prepared to work. And fight. That’s how he got so much out of so little over the years. “That guy was tough as nails,” said one teammate from his playing days. “He was as mean as a snake.”

While Jackson was riding coattails in Chicago and L.A., Sloan was in Utah squeezing every last ounce of talent from a group that had no business competing for titles every year.

Think a guy like that could’ve helped the Knicks?

Sloan kept things simple. As he explained it, “I never felt like there was anything I needed to do other than put the best effort in and see what happened.”

We want legends in this country, not guys who just work hard and do their job. We like mystery in our history, not a guy who just rolls up his sleeves and lights a fire under people.

And this week the Knicks got what they wanted.

Now there’s the Zen Masturbator up in the skybox, making $12 million a year to build a new Knicks team “that loves each other and plays with each other.”

Maybe it’ll work. Maybe this will save Carmelo Anthony’s career, and the old coach will pass down the zen wisdom of the triangle offense, and it will change everything. The Knicks will sign a bunch of big-name free agents, there will be championships and parades, and the Garden will be lush all over again. And it’ll all be thanks to Zen Master and his magic. Dr. Phil will be the guy who finally brings the Knicks back from the brink.

Something tells me these Knicks will provide plenty of L’s for anyone who can’t connect the dots.

Q&A: Goran Dragic on Being Fearless, Playing His Game, and ‘Words With Friends’