#HotSportsTakes: Should Richard Sherman Be Playing in the Super Bowl? 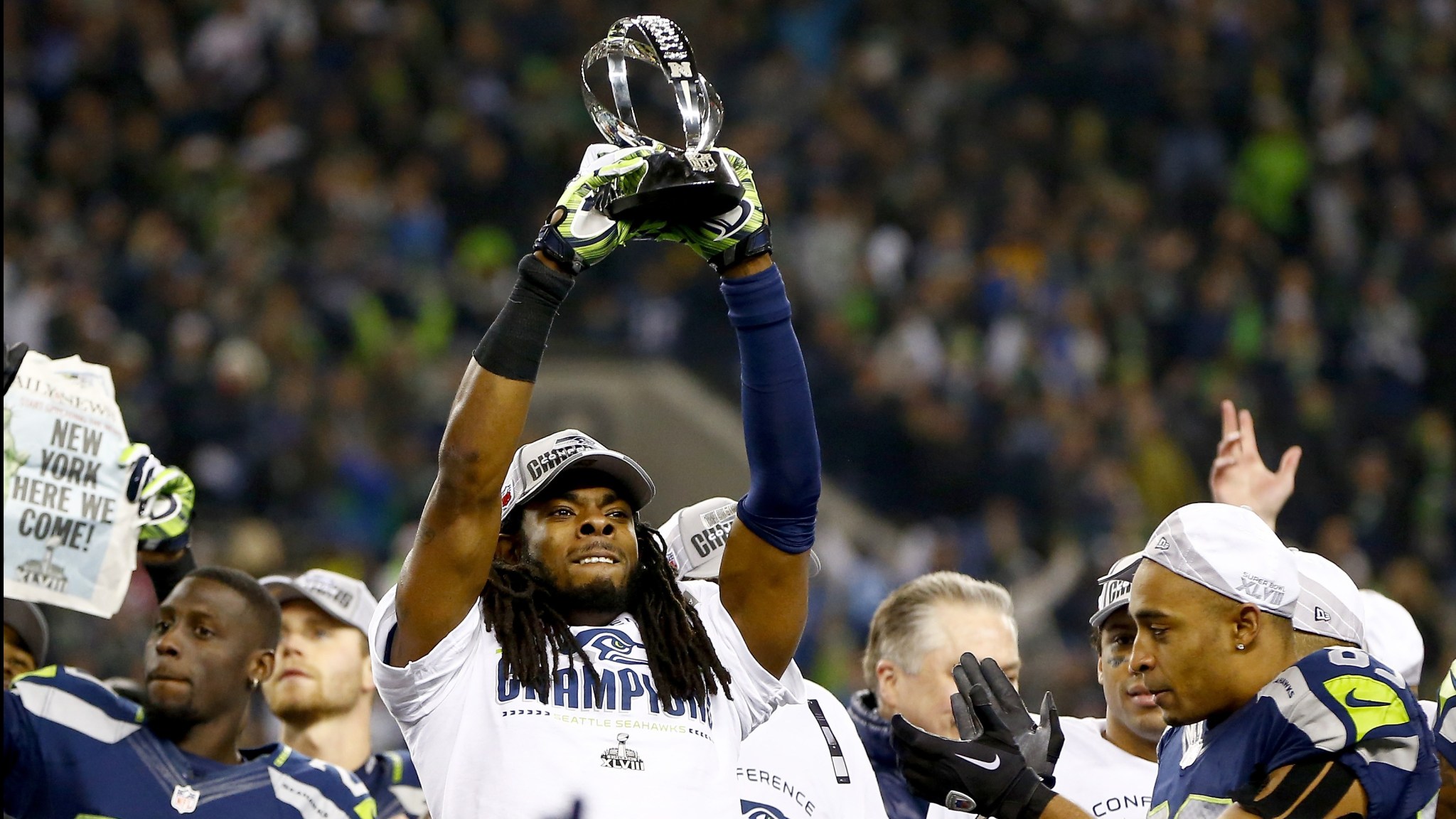 Every now and then, we will attempt to write the worst sports column on earth. Today: Let’s talk about the shameful display from Seattle on Sunday, and what happens next.

I’ve seen so many people falling all over themselves to defend Richard Sherman in the past 48 hours, the Internet excuse machine is almost worse than the crime.

I was a mile high in the Denver press box when it happened Sunday night. Busy working up a column on Peyton’s perseverance, remembering what it’s all about, I looked up to watch the end of the Seahawks-49ers game, saw that thrilling ending, and it happened.

The no. 1 cornerback in football may be Rich, but he seems like more of a Dick.

“I’M THE BEST CORNER IN THE GAME,” Sherman screamed into millions of living rooms across America. “WHEN YOU TRY ME WITH A SORRY RECEIVER LIKE CRABTREE, THAT’S THE RESULT YOU GON’ GET. DON’T YOU EVER TALK ABOUT ME. DON’T YOU OPEN YOUR MOUTH ABOUT THE BEST.”

That wasn’t an interview, that was a rant.

That was Kanye Pacific Northwest.

It was so beyond bush league, we all got lost in the shrubs. Could you imagine Peyton Manning grabbing the microphone Sunday and shouting about Tom Brady?

Brady certainly can’t. “I have respect for my opponents,” he said when asked about this mess. “That’s the way our team always plays. We win with graciousness.”

Then Sunday night, graciousness was gone.

Instead of handshakes and humility we all got buried under a mountain of bunk from somebody who saw his chance to become a trending topic and found a whole bunch of followers along the way. Blog sites everywhere picked up the story, and nearly all of them celebrated it.

It made me sad. And worried, too.

The guy who turns sportsmanship into a punch line is bad, but the culture that laughs along with him is far scarier.

So many different cowboys around the web have popped up to tell you it’s great! It’s entertainment. It’s part of the emotion of the game, and we all need to lighten up and be more understanding of football players. “If you criticize Sherman,” they all say, “maybe you don’t understand what football’s all about.”

But Sunday in the press box, I couldn’t help but think back to a legendary cornerback who never needed to scream to make his point. Tony Dungy spoke softly on the 1978 Super Bowl champion Steelers, but he also led the team in interceptions. His actions spoke for him. They always have.

Would Coach D ever be caught dead unleashing a rant like that after he won his Super Bowl with Indianapolis a few years ago?

Richard Sherman made the play to win it. But show a little class Richard. Sets up a great Super Bowl. Offense vs Defense.

Sunday made me sad for a lot of reasons. For the culture that cheered Sherman, for the Seahawks who trusted him, and even for Sherman himself.

He wins the biggest game of his life and that interview is his reaction. That’s happiness for this guy. It’s disturbing, when you really think about it.

But more than sad, Sunday made me mad. Because playing in the National Football League is a privilege, not a right, and Sherman abused that privilege. He made the whole league look bad. Even athletes from other sports were disgusted.

“Russell [Wilson] is a class act!” Justin Verlander tweeted. “Sherman on the other hand…. If he played baseball would get a high and tight fastball.”

And you know what? Roger Goodell has drawn a hard line on behavior like this his whole life. It’s time for football’s closer to step onto the mound and deliver a little chin music. 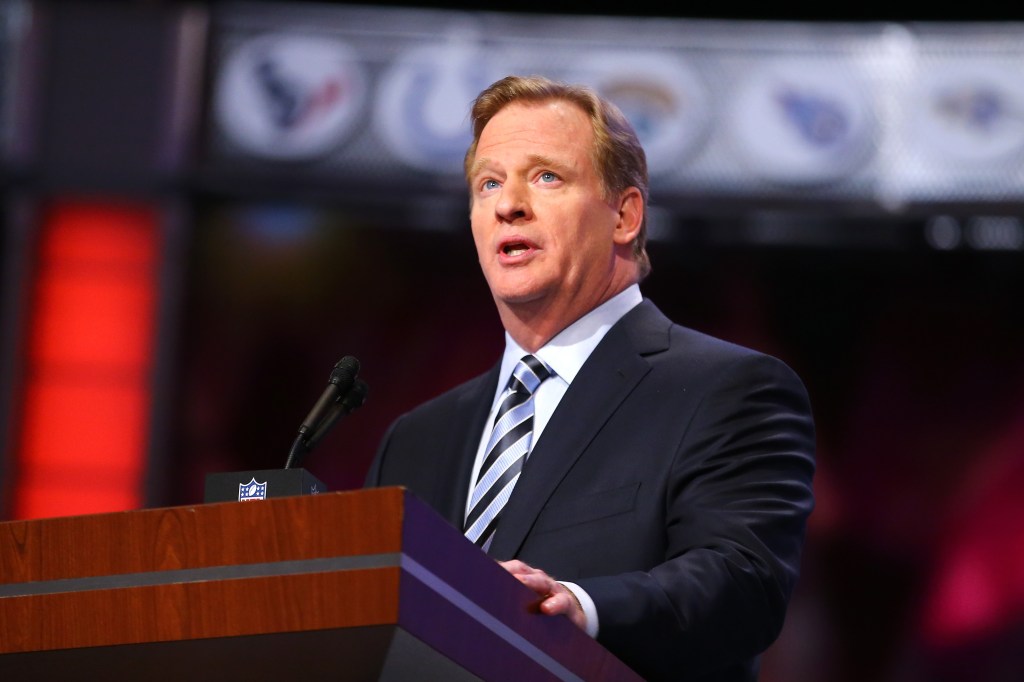 Sherman needs a lesson after all this — we all do — and it’s Goodell’s job to be the teacher here. When you ditch class, you get detention.

Sit him down, Roger. The NFL’s reputation took a hit Sunday night, and it’s time to hit back. Suspend Richard Sherman for the Super Bowl.

Not because Sherman’s a bad guy, but because he’s a smart guy (he went to Stanford), and if you teach him a lesson here, he might just learn something.

Sit him down. For the Seahawks more than anyone. Sherman’s become a distraction for 52 other guys about to play the biggest game of their lives, engulfing a great team in a hurricane of nonsense and a narrative that wastes everyone’s time.

In a perfect world, Sherman would do the right thing.

He’d hear all this and bow out on his own. But the world ain’t perfect, and if that headphones commercial is any indication, Dick Sherman ain’t listening.

So do the right thing, Roger.

When cowboys lose control, it takes a sheriff with integrity to set ’em straight. A sheriff who’s not afraid to stick to his guns.

Sit him down, Roger.

Maybe even send him to watch the game up in a Meadowlands skybox with a guy like Dungy, a man who’s never worried about going “viral” in his whole life.

We could all use some after this weekend.

Football looked bad on a national stage Sunday, but there’s no better, bigger stage in America than Super Bowl Sunday. In between the fireworks and end zone dances and the halftime shows and ads, maybe this year the Super Bowl can cut through the commercials and send a message that actually matters.

Just my two cents in a dollar-driven world. Roger Goodell’s National Football League used to stand for something bigger than football.

Maybe it still can.