#HotSportsTakes: Put This Bronco Out to Pasture 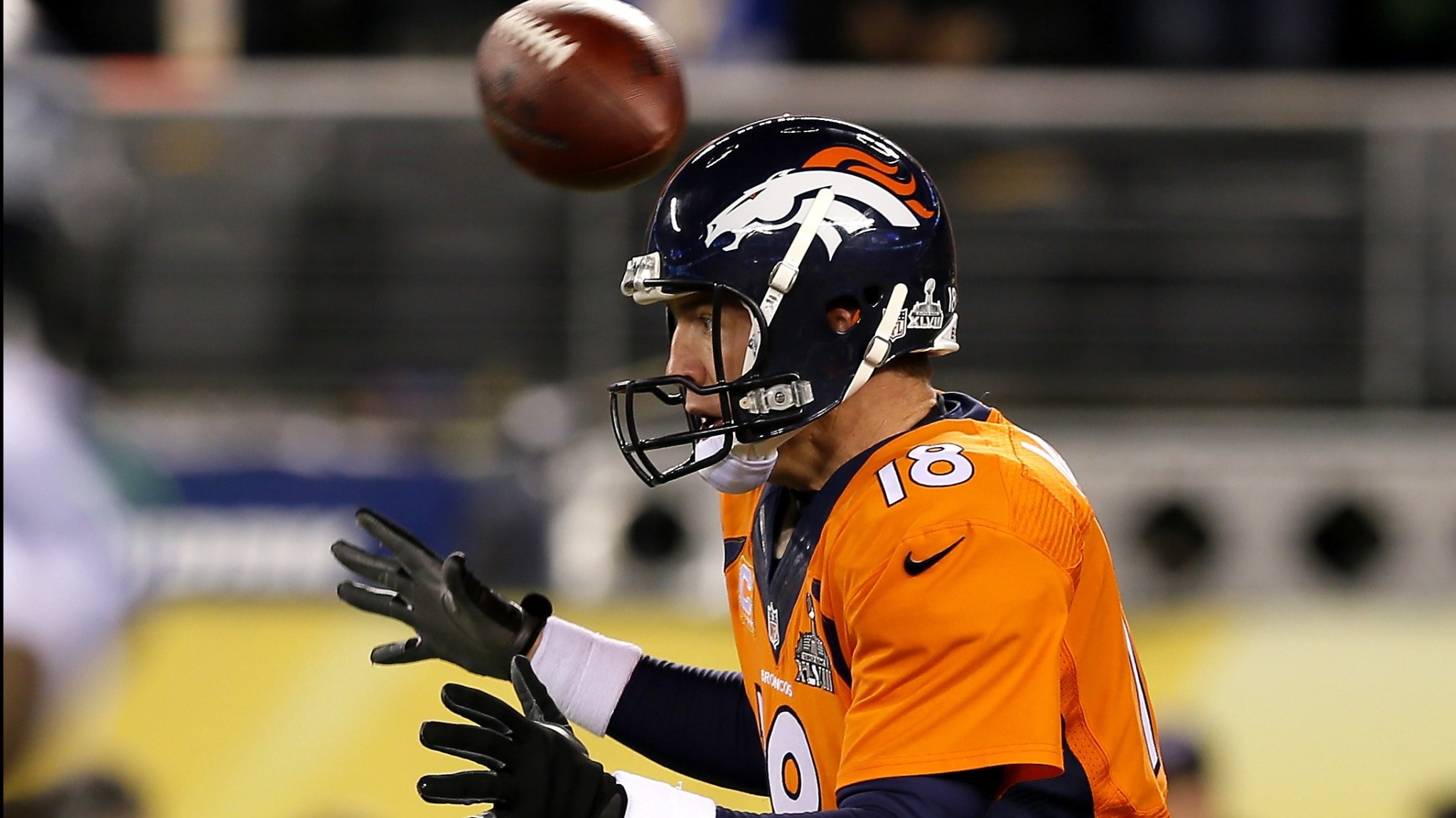 Every now and then, we will attempt to write the worst sports column on earth. Today: Let’s talk about Peyton Manning and a career full of disappointment.

Maybe it was the weather. Maybe it was something dark in his personal life, a crack in the shiny All-American façade that got exposed during Super Bowl week and took his head out of the game.

Or maybe when he came back from neck surgery two years ago, he used a performance-enhancing supplement. Maybe that enhanced his game more than anyone could have imagined, and maybe the NFL found out about it, and forced him to cycle off before the Super Bowl.

Or maybe this is just Peyton Manning.

We’ll probably never know what happened this weekend, but for now, go back and look at the losses. To the Steelers, to the Patriots, to the Saints in that Super Bowl, to the Ravens last year. Favored every time, loser over and over again.

Great players may lose now and then, but they don’t lose like that. Only Peyton Manning loses like that.

You half-expected Roger Goodell to get out there on the Super Bowl stage and apologize to America when he handed that trophy to the Seahawks. America deserved a better show.

Everybody has an off night sometimes, his teammates made mistakes, his offensive line broke down, his numbers were still pretty good, the turnovers weren’t his fault … Of course! The Peyton Manning Excuse Factory is still in business after all these years. After Sunday, business is booming.

But these are the facts. Three turnovers, one touchdown, and zero wins on Sunday. Peyton was so pedestrian out there, it’s a wonder he didn’t get flagged for jaywalking. He was so clueless you’d have thought he was running New Jersey Transit.

So here’s a question: How many times does he have to drive a team into a ditch before someone takes the keys away? Even O.J. wouldn’t want a ride with this white Bronco. Not after Sunday.

He can yell “Omaha!” till the cows come home, but it’s time to put a stake in him.

It’s sad, too. I wanted him to turn the corner. I wrote about his family tradition earlier this year, but I wanted him to leave it all behind, conquer his demons in front of the whole world. It didn’t happen.

But as Sunday night turned into Monday morning and I stared out onto the MetLife field thinking about what it all meant, I remembered everyone else he let down.

His teammates who thought they were playing with the most valuable player in football. The millions of fans who gathered around the TV to watch their hero. The National Football League that spent two weeks promoting this blockbuster and got a big ol’ flop from its leading man.

Big John spent the past few years building this roster from scratch, turning it from a joke to a juggernaut. He’s got nothing left to prove with me or anyone else, but he felt loyal to the Broncos organization, owner Pat Bowlen, and the city of Denver, so he did it.

Almost overnight, Denver had a playoff team on its hands, and after that, the Broncos became one of the best teams in football.

That’s the Elway effect. That’s what adding a winner will do for your franchise.

You want to talk great Super Bowls? For the rest of my life, I’ll never forget him in 1998, rolling out of the pocket on that third down, diving headfirst into three Packers, getting hit and spinning through the air for a first down.

That’s football, folks. That was a quarterback putting his body on the line because he just wanted it that bad. Elway was 37 that day, just like Peyton is now, and he won his championship, because the National Football League rewards that kind of sacrifice.

I didn’t see that sacrifice from Peyton on Sunday.

I saw a whole lotta ducks and a goose egg on the scoreboard. (He was playing “duck, duck, goose egg” out there, but this wasn’t preschool. It was the Super Bowl.)

It all made me sad for Big John. When you think about Peyton’s father and where he came from and what he’s become, he has all the quarterback DNA you could ever want.

Except the only gene that matters.

The gene that John had. 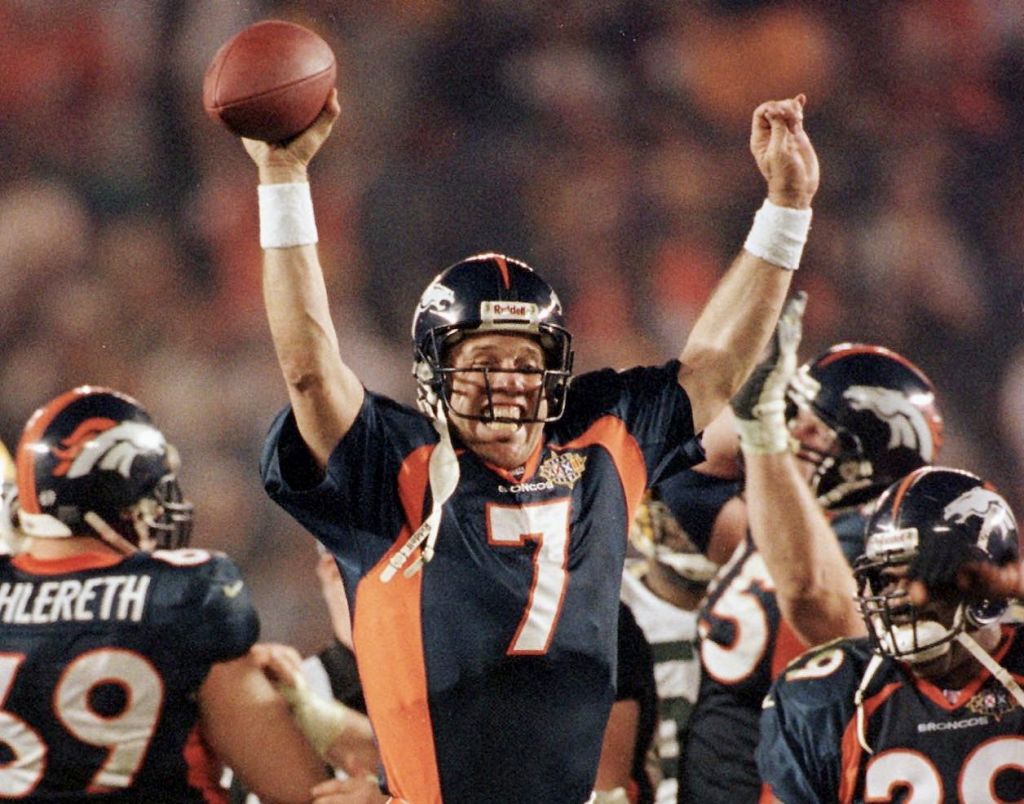 So while the Seahawks celebrate and go sleepless in Seattle, the Broncos are looking up what to do in Denver when you’re dead.

You think back to how this season started, with seven touchdowns on opening night, and you can’t help but shake your head. Maybe some guys spend their whole lives getting ready for the biggest game of the season, and other guys are built for Week 1.

My question is, how much longer does Denver let Peyton start the year if we know he’s going to finish like this?

They don’t play the Super Bowl in September.

For a Denver team lined with talent, maybe it’s time to end a relationship that was always sort of a fling in the first place. Manning might be the most famous player in the NFL, but commercials don’t win championships. Hype doesn’t convert a third down in the Super Bowl, heart does.

I care about the Denver Broncos, and their fans deserve better than the guy who’ll get them just far enough to let everyone down.

It’s up to Elway to make the call now.

It won’t be easy, but winning Lombardi Trophies isn’t supposed to be. The longer the Broncos stick with Peyton, the further they are from finding a guy who understands that. From finding another Big John.

Denver rode Peyton hard, and it got ’em nowhere.

The no. 1 Bronco bucked under the pressure. Kicked up his heels and said “nayyyyy” when it was time to play. So what do you do when a horse pulls up lame?

The excuse factory may never close with Peyton Manning.

But the glue factory’s open, too.

Yasiel Puig may not strike one as a prototypical leadoff hitter, but he could find himself in the top spot for Don Mattingly this coming season. Mattingly said by switching Puig and last year's leadoff hitter, lefty-swinging Carl Crawford, in the order, it would provide better righty-lefty balance, with right-handed hitter Hanley Ramirez batting third and left-handed hitter Adrian Gonzalez batting fourth.

Evan Turner insists he doesn’t check to see if his name is popping up in trade rumors prior to the Feb. 20 deadline. But before Monday night’s game against the Nets at the Barclays Center, he said, “If I had read the paper, I’d have been packed for different weather.”