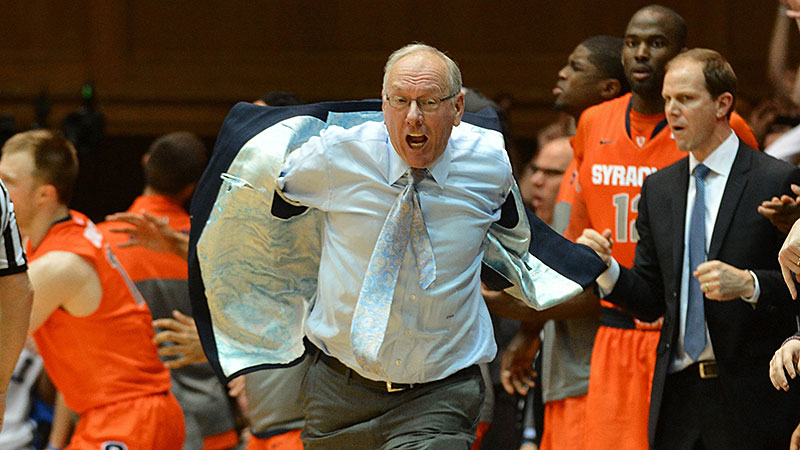 When Syracuse fled the Big East for the ACC, we bemoaned the loss of cherished decades-long rivalries. We prayed the cruel sands of time would not scrub away the importance of storied clashes between the Orange’s Lawrence Moten, the Hoyas’ Othella Harrington, and the Huskies’ Donyell Marshall. The people who threw our memories on the trash heap? Heartless, cigar-chomping conference bigwigs, all cackling as they sliced up television revenue.

But after a pair of spectacular games between Syracuse and Duke, who doesn’t love the benevolent executives who provided us with such compelling entertainment? Saints, all of them. Good dudes! The first two conference matchups between the Orange and the Blue Devils have been masterpieces, packed with fantastic individual performances, nerve-racking tension, and controversial conclusions. What were we whining about, again?

On Saturday, Duke avenged its February 1 overtime defeat at Syracuse with a 66-60 victory at Cameron. Both teams were smarting from losses suffered earlier in the week, but the hype surrounding the game was undiminished. After all, it was still no. 1 against no. 5, via the AP top-25 poll. Jim Boeheim against Coach K. The Big East conquistador against the defender of the ACC.

The game was an ugly, grueling slog, with players scrounging for precious buckets like hogs rooting for Alba white truffles. Duke’s guards suffocated the celebrated Syracuse backcourt, bullying freshman point guard Tyler Ennis into an uncharacteristic 2-13 shooting performance and making sharpshooter Trevor Cooney vanish. On offense, Rodney Hood embedded himself in the solar plexus of the Orange’s 2-3 zone, using both his jumper and quickness around the hoop to cause internal bleeding. Jabari Parker quietly pitched in 19 points on just eight field goal attempts. Syracuse survived only by battering Duke on the boards, raking in 16 offensive rebounds to atone for a miserable 39 percent shooting percentage as a team.

Now let’s talk about the Call. For those of you too busy binge-streaming True Detective to catch a replay: With 10 seconds remaining and Duke up by two, Syracuse’s C.J. Fair steamed baseline, collided with Hood, and kissed the rock off the glass for a contorted game-tying bucket. But the official’s whistle tweeted, Fair was docked with a charging foul, and the basket was wiped clean. That’s when Boeheim transformed into O-Dog in the corner store and rushed onto the hardwood, barking, “What’d you say about my mama?” He was slapped with two technical fouls, and the four punitive free throws dashed any lingering hopes for a Syracuse victory.

Was it a bad call? Not egregiously so. Even with the benefit of slow motion and multiple camera angles, it’s unclear if Hood was still sliding into position when Fair went airborne. Stripped of context, it was one of those bang-bang calls that could easily go either way, inevitably infuriating fans of whichever team got handed the the shit end of the stick.

One can scrape together a convincing argument that officials should strive to govern with the same accuracy at all times, and that consistency supersede circumstance. But considering there were 10 seconds left in an agonizing knife fight between two of the top-five teams in the country, the game would undoubtedly have produced a more satisfying conclusion without a momentous interruption from the referees. A no-call would have given the Blue Devils a final opportunity and potentially treated viewers to another overtime thriller between two excellent teams. The problem isn’t that Syracuse got screwed — it’s that we all did.

But no experience is a waste if you get a good yarn out of it, and Boeheim’s crazed rage-monkey tantrum has been entered into the Duke-’Cuse rivalry canon. In fact, the Blue Devils’ hard-fought victory — a game they would have won easily, had they drained some free throws — is already being undermined by the coach’s freak-out. He became the story.

While Boeheim’s exhibition was the product of temporary insanity, it was also a masterful moment of agitprop and promotion for the Syracuse program. Take note: The only ejection of the coach’s 38-year career happened to occur in a hugely anticipated, nationally televised game against a fabled opponent during the Orange’s first season in the ACC. For a program whose prominence and recruiting power have always hovered a tier below the Dukes, North Carolinas, Kentuckys, and Kansases, this was a public relations coup.

Even as broadcasters and talking heads tut-tutted Boeheim’s lack of self-control, Twitter was flooded with support from sympathetic viewers who admired his fiery outburst. There is no shortage of hoops heads who claim referees give favorable treatment to the Blue Devils at Cameron (especially when it comes to charging fouls), and the Orange are now a high-profile victim of such perceived bias. Hatred of Duke is fertile ground. Boeheim has planted seeds that will sprout high.

The player-safety argument was not sitting well with the former Red Raider quarterback. "I mean, (Saban) showed up at the meeting and let it be known ... I know the last three losses he's had have been against so up-tempo teams," Kingsbury said. "So I'll just leave it at that."